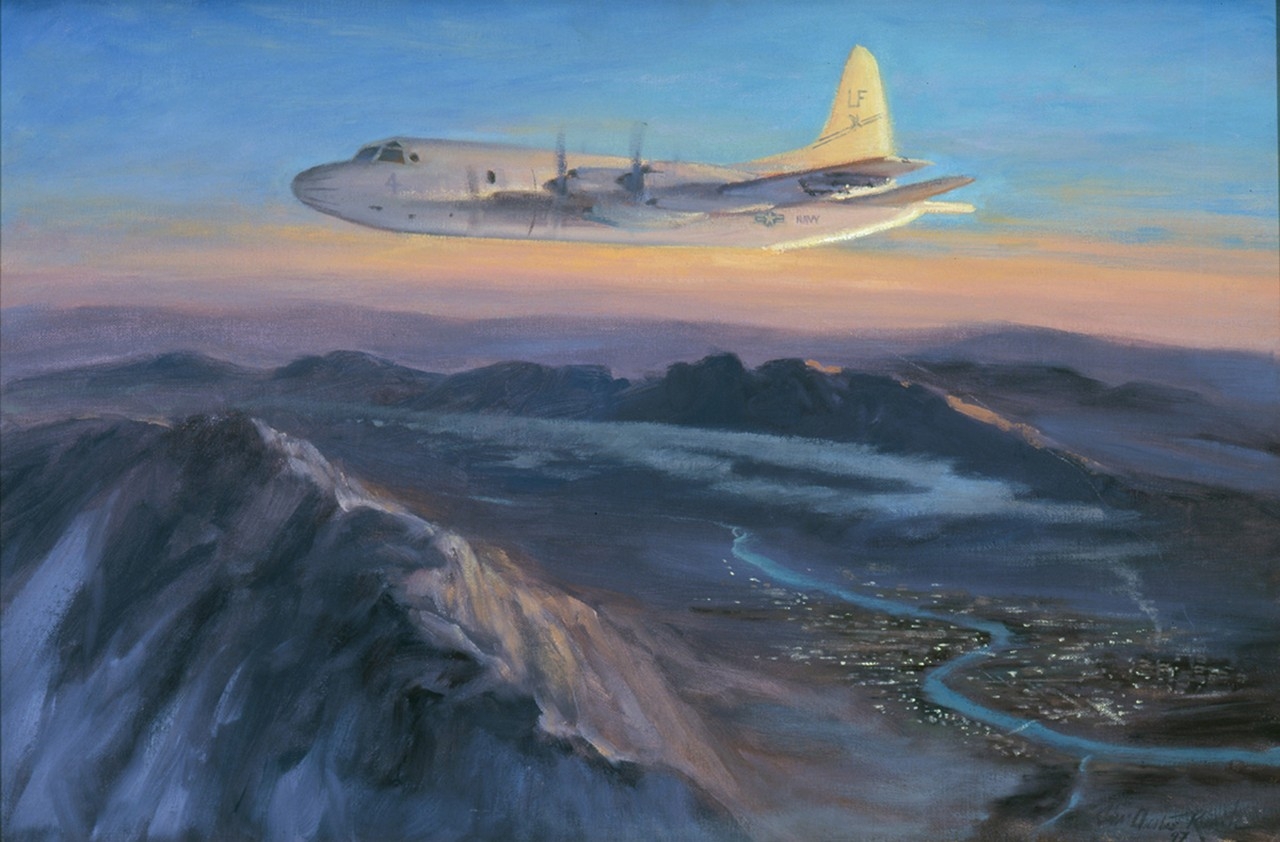 As part of a United Nations Joint Task Force, the Navy participated in peace-keeping operations in Bosnia-Herzegovina. These included Operation Deny Flight, which enforced no-fly zones, and Operation Sharp Guard, which blockaded the Adriatic Sea to prevent arms shipments to the warring factions. (Painting, oil on canvas board, by John Charles Roach, 1997, 97-141s)

The collapse of the Soviet Union and changes in the world order defined the 1990s, a decade also characterized by the containment of localized fighting and a revised naval strategy. Naval and naval air power played a significant part in the liberation of Kuwait in 1991.

During the rest of the decade, naval aviation patrolled Iraqi airspace and supported UN-imposed sanctions as well as limiting the Iraqi threat to minorities within the country and to their neighbors across the Middle East.

The fall of the USSR left the United States as the world’s only superpower, but the new global order presented regional and transnational rather than world threats as challenges shifted from political conflicts back to wars of tribes and faith. In response, the Navy developed a new strategy promulgated in a white paper entitled “ . . . From the Sea,” which emphasized littoral warfare (along coastlines) and maneuver from the sea.

The new geopolitical situation also called for the largest drawdown for the fleet since World War II, and many naval aviation squadrons were consequently disestablished, reorganized, or consolidated. Furthermore, the Navy ended 42 years of modern support of Antarctic research.

The breakup of the composite Yugoslav state into constituent republics presented the first major challenge to the new strategy. Aircraft carriers kept watch over the situation from the Adriatic Sea and supported Operation Provide Promise, the UN relief effort, and Operation Deny Flight, which monitored the air space over Bosnia-Herzegovina to prevent the warring parties from using their air strength.

The changes in the global balance of power had also enabled Muslim extremists to rise to power. One of their primary goals was to drive U.S. armed forces from Saudi Arabia and its neighboring countries.

The decade also marked a first for women when, in April 1993, Secretary of Defense Leslie Aspin overcame most of the restrictions that prohibited women from engaging in aerial and naval combat. Later in the year, Congress supported the secretary’s decision to allow women in combat by repealing the Combat Exclusion Law. In October 1994, Dwight D. Eisenhower (CVN-69) became the first carrier to deploy with women permanently assigned on board.

18 May 1990—Night attack F/A-18Ds, the first two-seat Hornets designated to fly tactical as opposed to training missions, began service at MCAS El Toro, California. They replaced A-6 Intruders as the Marines’ day/night bombers. 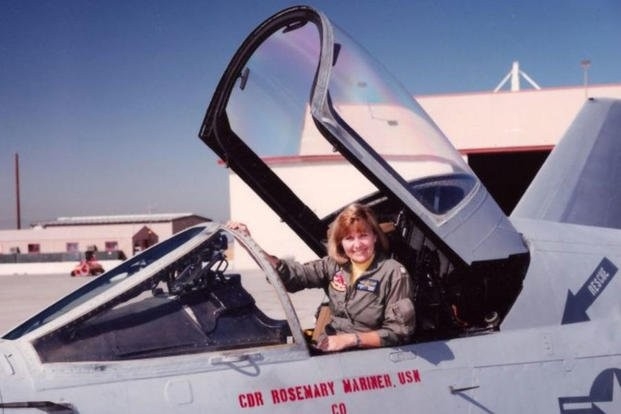 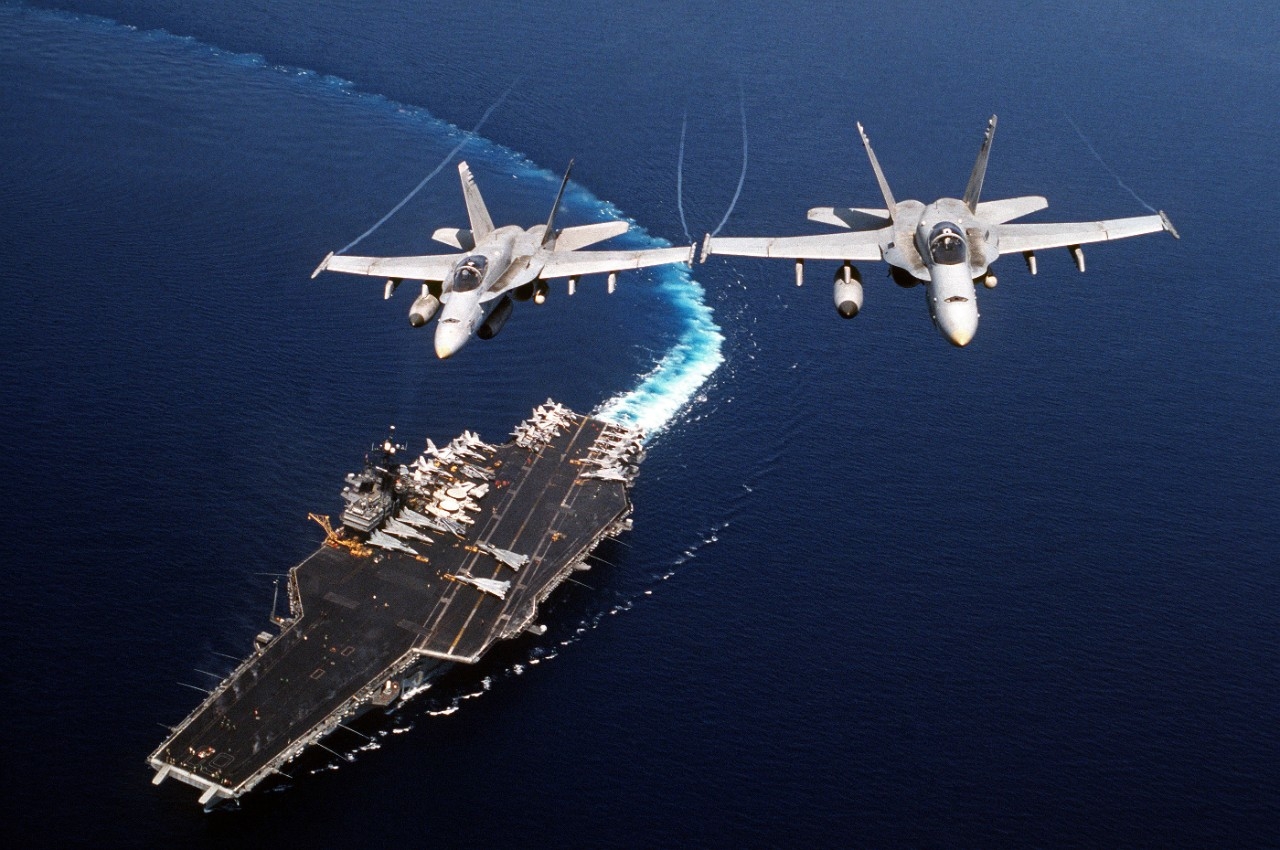 18 January 1991—VA-35 A-6E crews, embarked on board Saratoga (CV-60), used night vision goggles in battle for the first time in the squadron’s history during initial strikes against the Iraqis.

21 February 1994—Lt. Shannon L. Workman of VAQ-130, embarked on board Dwight D. Eisenhower (CVN-69), became the first female combat pilot to successfully pass fleet carrier qualifications. She was slated as one of four female aviators to deploy to Dwight D. Eisenhower in October.

30 August 1995—Theodore Roosevelt (CVN-71) launched the initial NATO strikes against the Serbs in Bosnia-Herzegovina that began Operation Deliberate Force — aerial attacks to reduce Serbian military capabilities to threaten safe areas, UN peacekeepers, and humanitarian aid workers. Targets included enemy field forces and heavy weapons, command and control facilities, direct and essential military support facilities, supporting infrastructure, and lines of communication in the southeast of the country. The strike consisted of two waves of four F-14A Tomcats of VF-41; 31 F/A-18C Hornets of VFA-15 and -87 and VMFA-312; and two EA-6Bs; supported by other Prowlers from Aviano AB Italy. During the second wave, the ship also launched an S-3B Viking of VS-24 and an ES-3A Shadow. Five echelons of allied strikes followed the naval aircraft with attacks on targets in and around Sarajevo. Through 4 September, aircraft flew 492 sorties from Theodore Roosevelt.

20 February 1998—The Navy ended 42 years of modern support of Antarctic research and Operation Deep Freeze with the disestablishment of Naval Support Unit Antarctica. The service transferred the mission to the 109th Mobility Air Wing, New York Air National Guard, but provided limited flight support to the program throughout the 1998–1999 research season.

16 December 1998—The coalition launched Operation Desert Fox against the Iraqis. 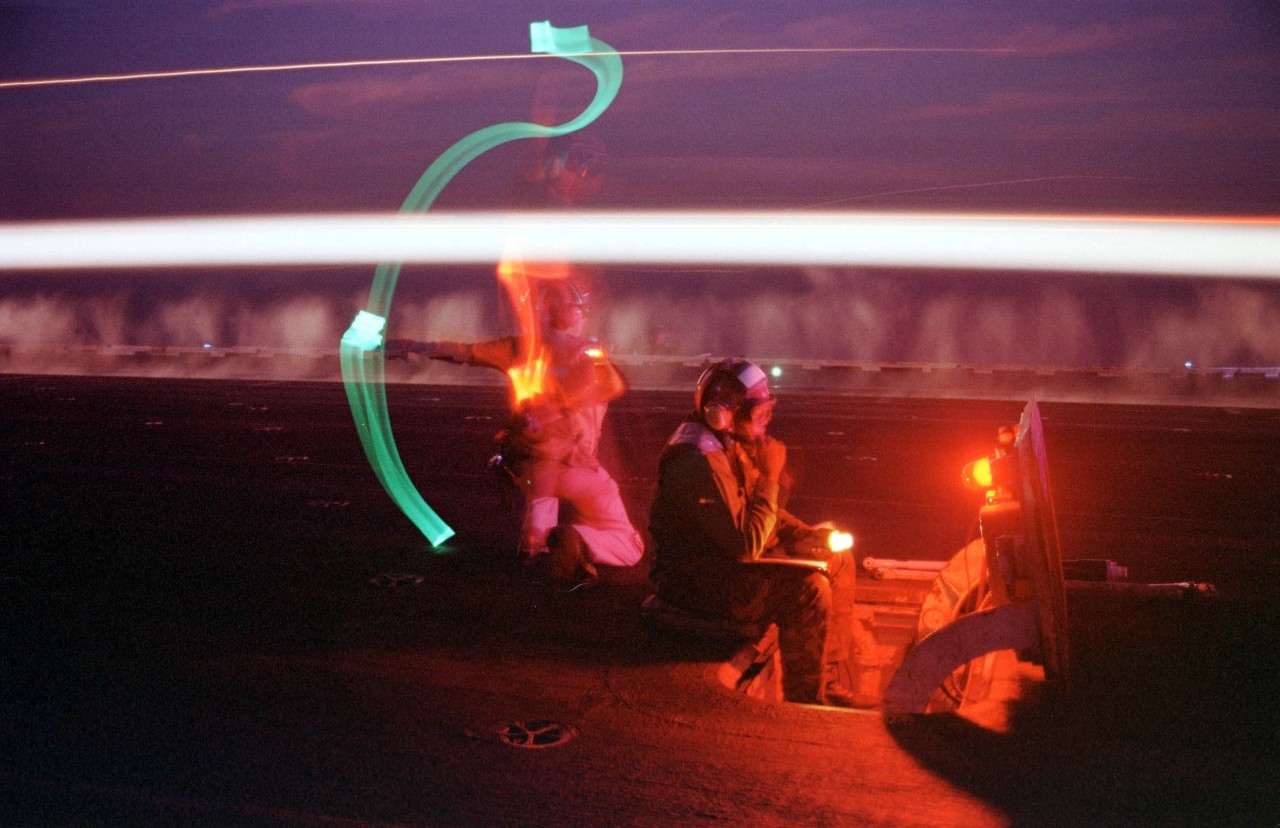 Enterprise (CVN-65), 1998. Night-time operations on the flight deck become a ballet of lights as the aircraft carrier launches strikes against Iraq during Operation Desert Fox. (US Navy photograph, now in the collections of the National Archives, 981217-N-5458S-002)

From the Sea: Working Papers and Drafts, 1992 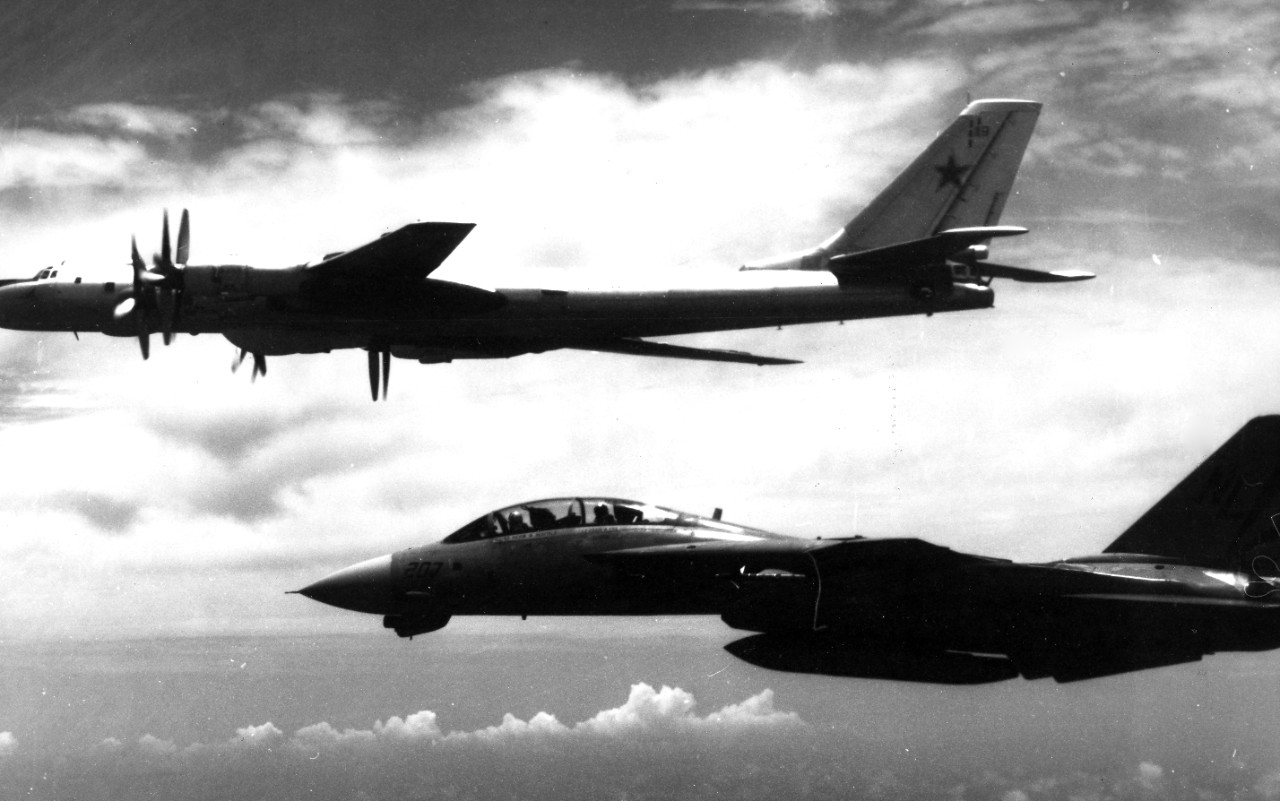