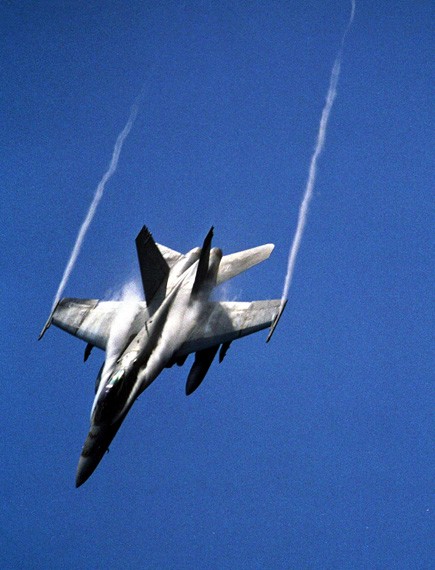 The Hornet is a direct descendant of the Cobra. In nature's environment, this statement would not make any sense, but in aviation such relationships are not uncommon. Thus, the McDonnell Douglas F/A-18 Hornet traces its direct ancestry to the Northrop Cobra, a twin engine multimission fighter design developed for the export market in the late 1960s. The Cobra was never built in this form. In 1971, the Air Force requested proposals for a lightweight fighter prototype program; Northrop's entry was derived from the Cobra design. One of the two winners in the Air Force competition, Northrop was awarded a contract in 1972 for two YF-17 prototypes, each powered by two General Electric YJ101 engines. General Dynamics was the other winner, building two single engine YF-16s.

First flight of the YF-17 was in June 1974. By this time, the Air Force had decided to proceed with Air Combat Fighter (ACF) Program, based on flight testing of the YF-16 and YF-17 prototypes. The Navy was also initiating a program to develop a new VFAX in this time period--a strike fighter to replace both the F-4s and A-7s in its carrier air wings.

The following year, 1975, brought major program action: the Air Force selected the F-16 to be produced for the Tactical Air Command, and the Navy was directed by Congress to base the VFAX on either the YF-16 or YF-17 designs. Two of the companies having a major interest in the VFAX, which was redesignated the Navy Air Combat Fighter, paired with the F-16/17 builders; neither of the latter had experience in producing Navy carrier fighters. Vought as a prime contractor teamed with General Dynamics on a single-engined F-16 derivative, while McDonnell Douglas became the prime, paired with Northrop, on an F-17 derivative. To meet Navy requirements, considerable improvements in areas such as combat radius and radar capability were incorporated, in addition to carrier suitability features. The resulting redesign was extensive and, when the McDonnell Douglas design was selected as winner in 1976, it was assigned the F-18A designation. The developed versions of the YF-17's YJ101 engines were redesignated F404s.

While the general configuration of the YF-17 was retained, the F-18 became a completely new airplane. To meet the single-place fighter and attack mission capability, full use was made of new technology in digital computers. Coupled with cathode ray tubes for cockpit displays and appropriate controls based on thorough pilot evaluations in simulators, a single airplane and subsystems configuration for both missions was evolved and the Hornets are now F/A-18s, a new type of designation recognizing their dual capability. 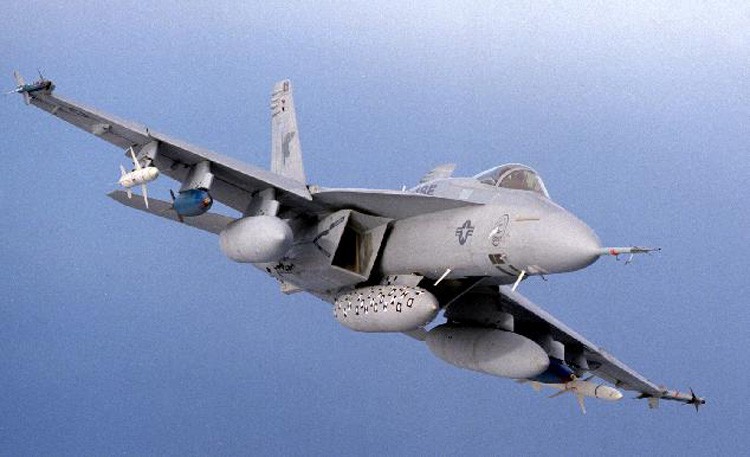 During development, two-place trainer versions were added, to be built in limited numbers as TF/A-18s, intermingled with the basic F/As. Minimum changes were made to incorporate the second cockpit, with the two-seat airplanes retaining the ability to perform combat missions.

Making the first flight in November 1978, the F/A-18 and its two-place derivative have undergone most of their development testing at the Naval Air Test Center, under the new single-site testing concept. While much attention, both internal and external, was focused on development problems, these have largely been typical of those in any new program with their resolution being part of the development process. For the most part, these have occurred in the basic aircraft hardware rather than in the digital electronic systems.

The initial production airplanes, the first training F/A-18s have been in service with VFA-125 since November 1980. The new capabilities introduced by the F/A-18 have met with an enthusiastic response among operating personnel.

Current F/A-18s in the inventory included F/A-18As, F/A-18Bs, F/A-18Cs and F/A-18Ds. The Hornet is a critical element in the plan to recapitalize the Navy and Marine Corps aviation capability. When the A-6 Intruders and F-14 Tomcats have left the inventory, the F/A-18 Hornet alone will represent the Navy's carrier-based strike fighter capability.

Upgrades and modifications continue to be made and developed for the F/A-18C/D aircraft. These upgrades include radar, advance targeting FLIR, countermeasures dispenser system, standoff land attack missile system, and other electronic systems.

Modernization development is underway for the next Hornet series, the F/A-18E/F, which will provide increased mission radius, endurance, and survivability above that of its predecessor while providing the capacity for twenty-plus years of growth that is unavailable in the current F/A-18C/D. There will be extensive commonality in weapons systems, avionics, and software between the two aircraft and the infrastructure for supporting the new Hornet will grow from in-place organizations. The lethality, flexibility, reliability, and survivability of the F/A-18E/F will make it the aircraft of choice to fulfill the majority of missions associated with regional and littoral scenarios.

Description: Drawings and Data on the F/A-18E Super Hornet