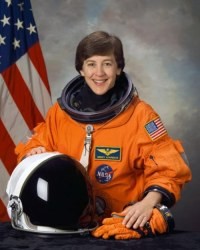 When 10 year old Wendy Lawrence watched Neil Armstrong take the first steps on the moon, she decided to become an astronaut. She was also motivated by the television program "Star Trek." She followed her father's footsteps when she entered the U.S. Naval Academy in 1977; she served as Deputy Commandant of Midshipman in her senior year. When she graduated with her ocean engineering degree she hugged and kissed the Superintendent, her father who had assumed the position in 1978.

After distinguishing herself as a flight school graduate she was designated an Naval aviator in July 1982. Over the next few years, she accumulated 1,500 hours flight time in six different types of helicopters and completed more than 800 shipboard landings. She earned a Master of Science degree in ocean engineering from the Massachusetts Institute of Technology and the Woods Hole Oceanographic Institution in 1988.

After teaching physics for two years and serving as the novice women's crew coach at the Naval Academy, NASA selected Lawrence in August 1992. Of the 3,000 or so men and women applying every two years for the astronaut program, NASA chooses about 30. The Naval Academy reportedly produces more astronauts than any other school. Her MIT/WHOI degree and her aviation experience helped set her apart from others.

A year's training qualified Lawrence for flight assignment as a mission specialist. She logged more than 1200 hours in space when she completed four space flights: STS-67 Endeavor (March 2-18 1995), STS-86 Atlantis (September 25-October 6, 1997), STS-91Discovery (June 2-12, 1998), and STS-114 Columbia (July 26-August 9, 2005). She recalled that the beautiful view of the planet on her first mission made it worth all that it took to get there. She made two trips to the Russian Space Station Mir and another to the International Space Station. The 2005 mission was the first one since the fatal February 2003 Challenger accident. After her retirement from the Space Program in 2006, she worked as consultant for the Andrews Space, Inc. on a NASA contract that has been completed.

Today, she speaks before a variety of audiences including the Kennedy Space Center's annual salute to girl scouts. As a result of this program more than twenty girl scouts have served their nation as astronauts.

She advises young people (1) " to 'dream' their impossible dream emphasizing that rarely, if ever, will someone simply hand their dream to them, (2) to be willing to follow up their dream with a great deal of hard work, determination, and perseverance, (3) to surround themselves with people who will help them move closer to, not farther away from, their dream, and (4) to stay in school and get a good education in order to be prepared to take full advantage of the opportunities that come their way as they walk down the path to fulfilling their dreams."

CAPT Wendy Lawrence’s commentary about achieving dreams is good advice for all of us.