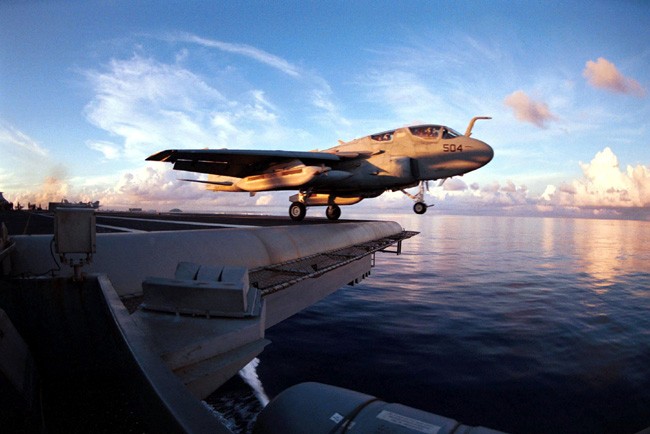 The EA-6B Prowler was designed to complement the Navy's defenses in today's electronic warfare environment. Electronic countermeasures required improvement to compete with the ever-increasing complexity of hostile radar-guided guns, missiles and aircraft. The Prowler was the first aircraft built from the drawing boards to fulfill the role of an electronic warfare aircraft.

The first EA-6B was received by the Navy at NAS Whidbey Island, Washington in January 1971 and deployed to Vietnam in 1972. This "standard version" of the aircraft was replaced in 1973 with the "expanded capability" (EXCAP) EA-6B which augmented the frequency coverage of the ECM system. In 1976 the "improved capability" (ICAP) version entered service. The ICAP II EA-6B was the follow-on and a more sophisticated version. Its first deployment was in 1985. It featureed updated operator displays, an inertial navigation system, expanded frequency coverage and a "tactical EA-6B mission support" (TEAMS) system which allows sophisticated pre-flight planning and programming.

Combining a fully integrated electronic warfare system with long range, all-weather capability, the EA-6B has the ability to intercept, analyze and effectively neutralize hostile radars. Built by Grumman Aerospace Corporation, it is designed for carrier and advanced base operations. It has the basic airframe of the A-6 series with the addition of a forward cockpit, increasing the crew complement to four: one pilot and three electronic counter-measures officers (ECMO's).

The EA-6B supports strike aircraft, ships, and ground troops by degrading the enemy's early warning capability and electronic weapons systems. The avionics contained in the aircraft enable it to navigate under all weather conditions without reference to ground navigation aids, fly high altitude or low level profiles, and intercept and jam enemy electronic emissions by means of its primary "weapon", the Tactical Jamming System (TJS).

The TJS consists of an Onboard Electronic System (OBS) and externally mounted jammer pods. The OBS is capable of monitoring the electronic environment and displaying it to the ECMO's. When a threat is detected, action is taken to tune and direct the jammer pod antennae to the hostile radar.

EA-6B improvements have been many and varied to meet the current and projected threat. Other additions include incorporation of the "high-speed anti-radiation missile" (HARM) and improved communications jamming capability. The EA-6B ICAP II Block 89 program is providing new safety, structural and avionics modifications for the aircraft. This aircraft is projected to be operational through the year 2015.