The History of Blue Angels Aircraft: A Photo Essay

Over the course of 75 years, the more than 500 million people who have seen the Blue Angels perform at air shows around the world have witnessed the power and grace of some of the Navy’s all-time classic aircraft. Presented here are historical images of some of these classic propeller-driven aircraft and thunderous jets flown by the Blue Angels.

The first Blue Angels pilots were Naval Advanced Training Command flight instructors with wartime experience flying the F6F Hellcat, so it was a natural fit for the exhibition to team to fly the venerable World War II fighter in its early exhibitions. 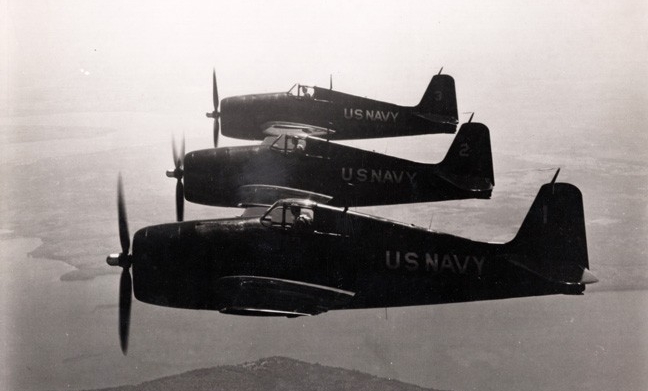 The last propeller-driven aircraft flown by the Blue Angels, the F8F Bearcat possessed tremendous power along with excellent maneuverability. It began flying in air shows toward the end of the team’s first season in 1946 and was the first aircraft to have the team name painted on it. It was also while flying the Bearcat that the Blue Angels introduced their enduring diamond formation. 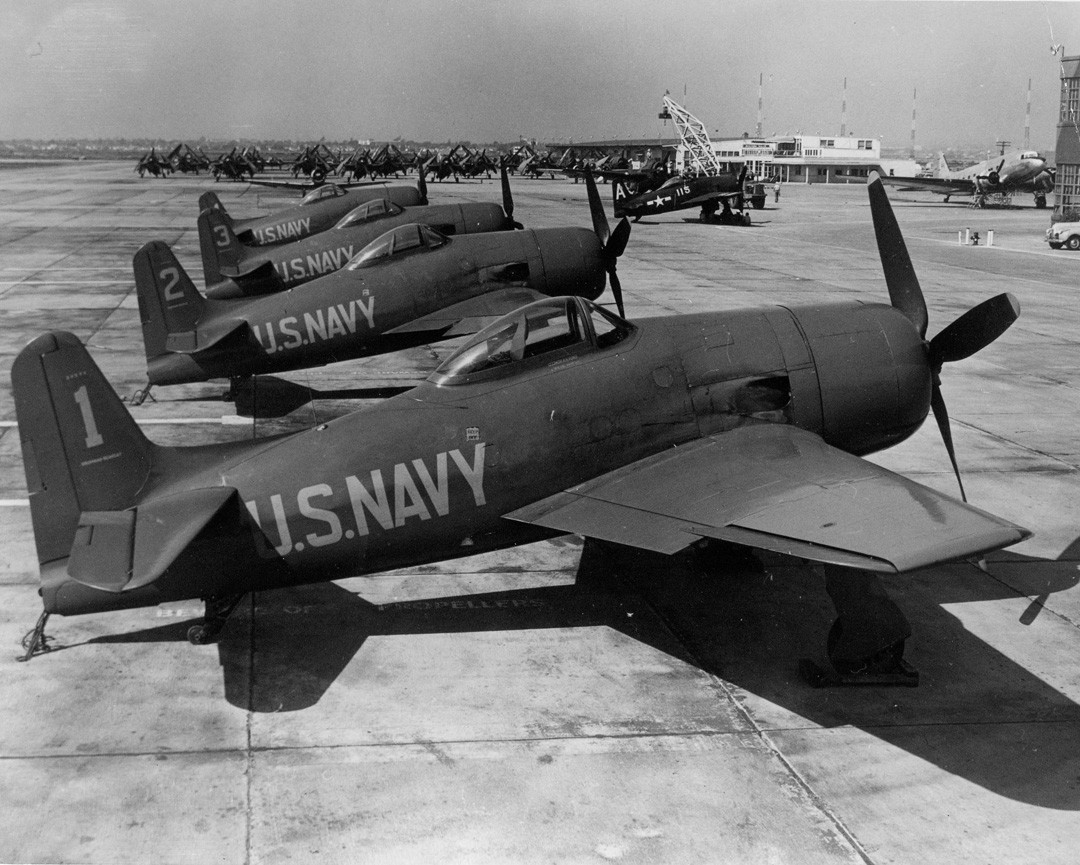 The Blue Angels flew two versions of the Panther (the F9F-2 and F9F-5), the first jet operated by the team. With its ranks including some of the most experienced jet pilots in the Navy when the Korean War started, the team disbanded in 1950 to serve as the nucleus of Fighter Squadron 191 (VF-191), nicknamed “Satan’s Kittens,” flying combat missions from Princeton (CV-37). The Blue Angels resumed flying the Panther when they reformed following that combat deployment. 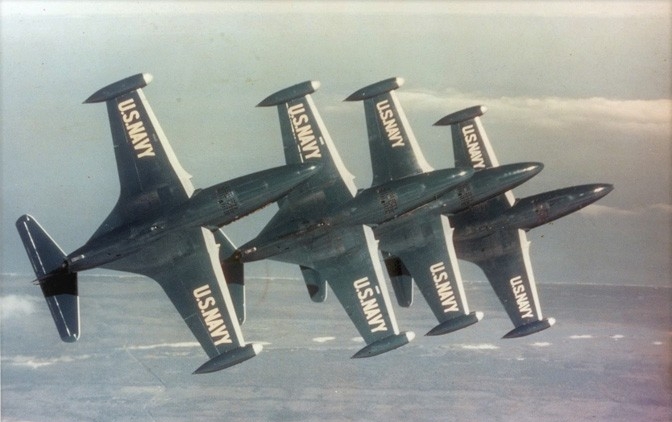 The swept-wing successor to the F9F Panther, the Cougar equipped the Blue Angels for only a brief time. They transitioned to the aircraft beginning in 1954 during their first winter training carried out at Naval Air Facility El Centro, California. It remains the winter training site to this day. 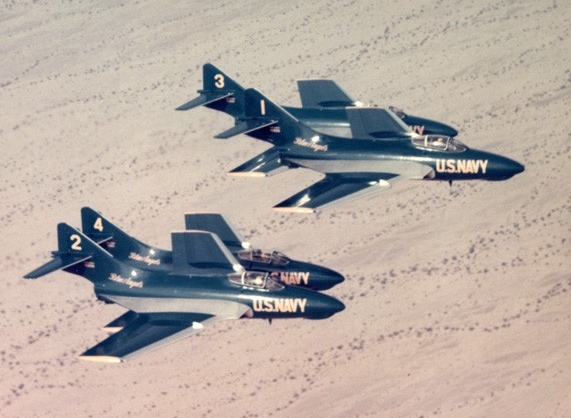 With its sleek lines and afterburner, the F11F Tiger proved one of the most popular show aircraft flown by the Blue Angels. The team operated both the short-nose and long-nose versions, and when the F-4 Phantom II replaced the Tiger after the 1968 show season, the F11F Tiger marked the end of an era as the last Grumman-built aircraft flown by the team. 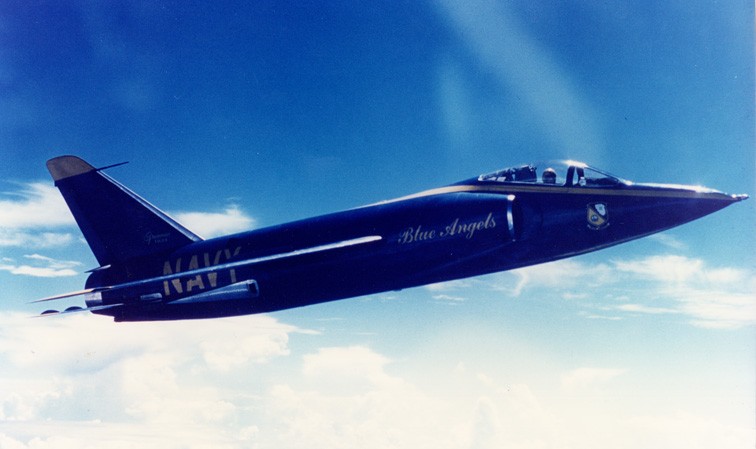 The only aircraft operated concurrently by both the Blue Angels and the U.S. Air Force Thunderbirds, the F-4 was the platform the team took to the far corners of the globe, touring South America, Asia, and Europe during the four years the Blue Angels operated the powerful aircraft. 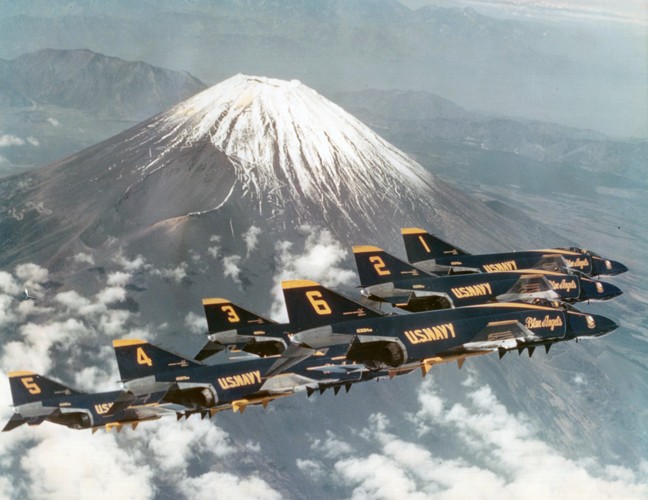 An airplane nicknamed the “Tinker Toy” by pilots because of its small size, the A-4 contrasted sharply with its predecessor. Known for its nimble performance, the Skyhawk equipped the Blue Angels during the 1974–1986 show seasons, the latter the 40th anniversary of the demonstration squadron’s establishment. 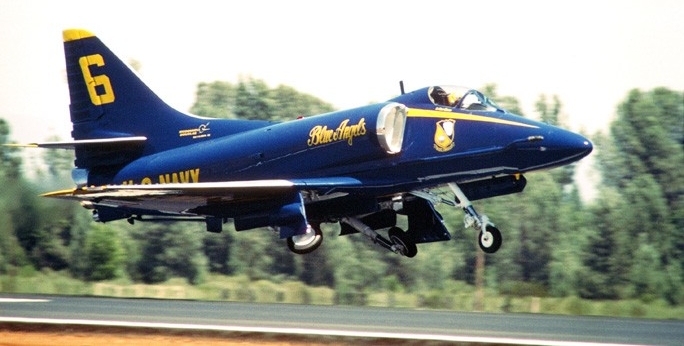 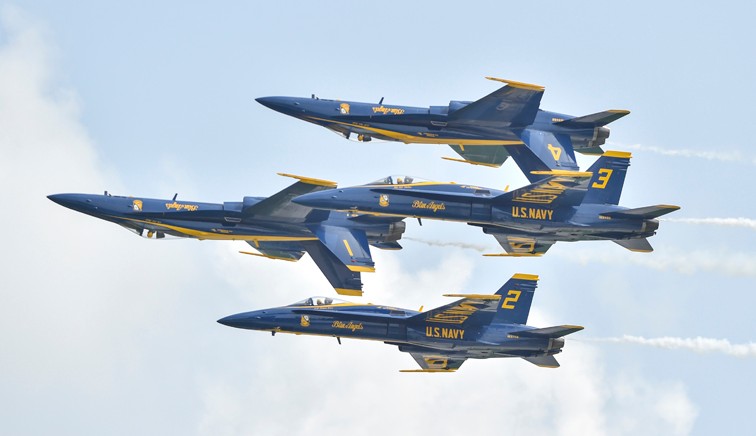 The 2021 show season, which also marked the 75th anniversary of the establishment of the Blue Angels in 1946, introduced the F/A-18 Super Hornet to air show crowds. As has been the case throughout the history of the Navy Flight Demonstration Squadron, the demonstration pilots adjusted the show routine to take advantage of the new platform’s capabilities.

In addition to the recognized demonstration aircraft, the Blue Angels have operated other aircraft for logistics support and some that filled short-lived roles or did not meet the team’s exacting standards.

With World War II fresh in the memories of the public when the Navy established the Blue Angels in 1946, the first flight leader Lieutenant Commander Roy “Butch” Voris created a show segment in which the team’s F6F Hellcats pursued an airplane playing the role of a Japanese fighter and “shot it down.” The first plane to fill this role was an SNJ Texan advanced trainer nicknamed “Beetle Bomb.” 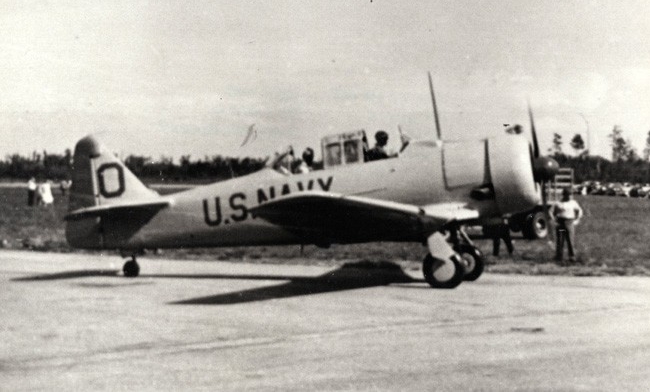 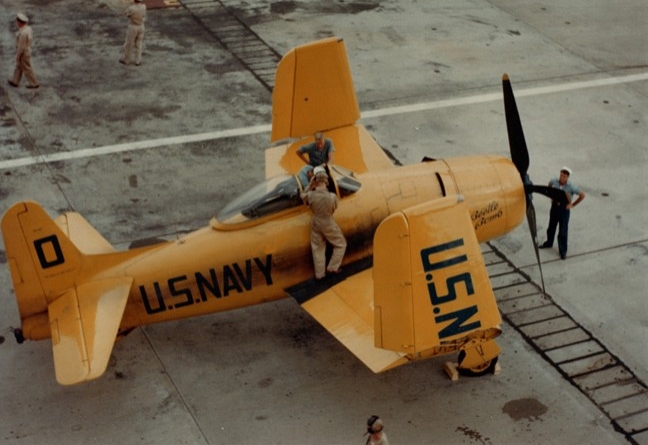 From 1952 to 1954, the Blue Angels flew a single TV-2 Shooting Star. This began a practice that continues to this day of operating a two-seat aircraft for show support and VIP rides. 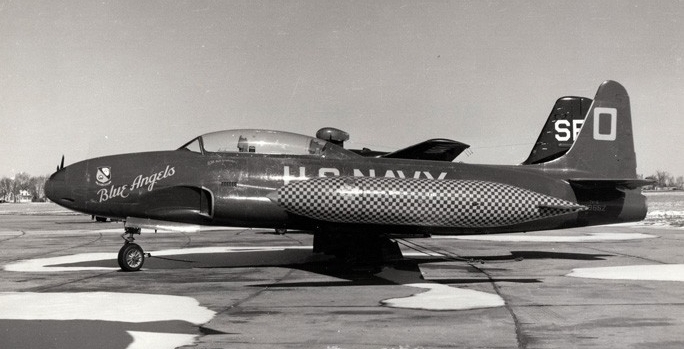 Evaluated by the Blue Angels as a possible demonstration aircraft in 1953, the F7U Cutlass proved as unpopular with the team as it did in the fleet, where it had a reputation for being underpowered and presented challenges for maintenance personnel. 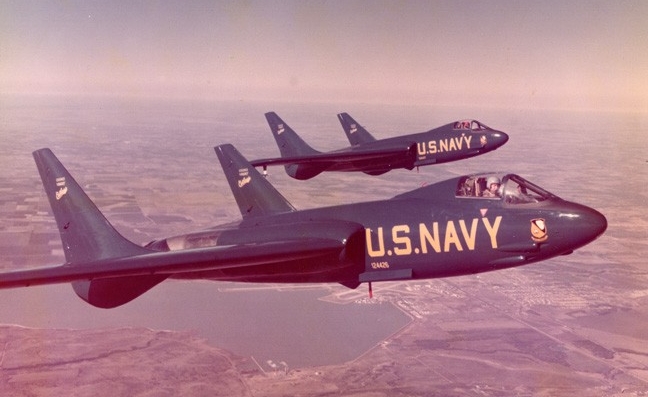 The venerable transport aircraft that made headlines with its role in the Berlin Airlift, the R5D Skymaster was among the aircraft used by the Blue Angels as a logistics aircraft transporting ground-support personnel to show sites. It served in this role from 1956 to 1968. 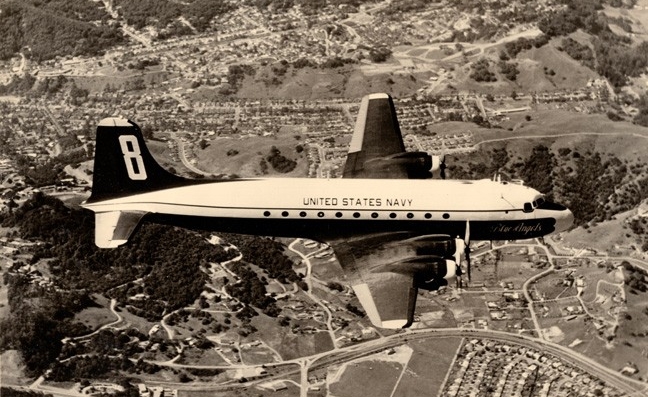 Popularly called “Fat Albert,” various versions of the C-130 Hercules have provided logistics support to the Blue Angels for more than 50 years. The venerable aircraft routinely opens air shows and for many years executed jet-assisted takeoffs (JATOs) to the delight of spectators. 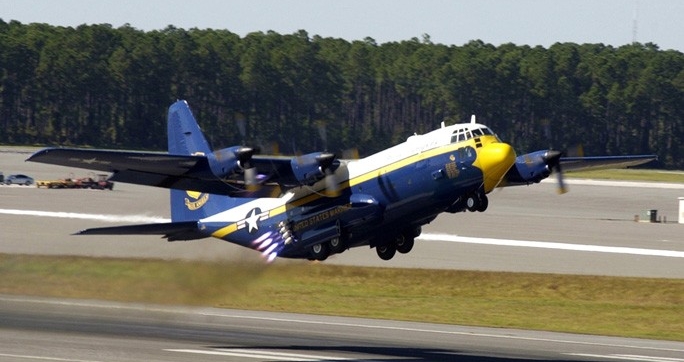