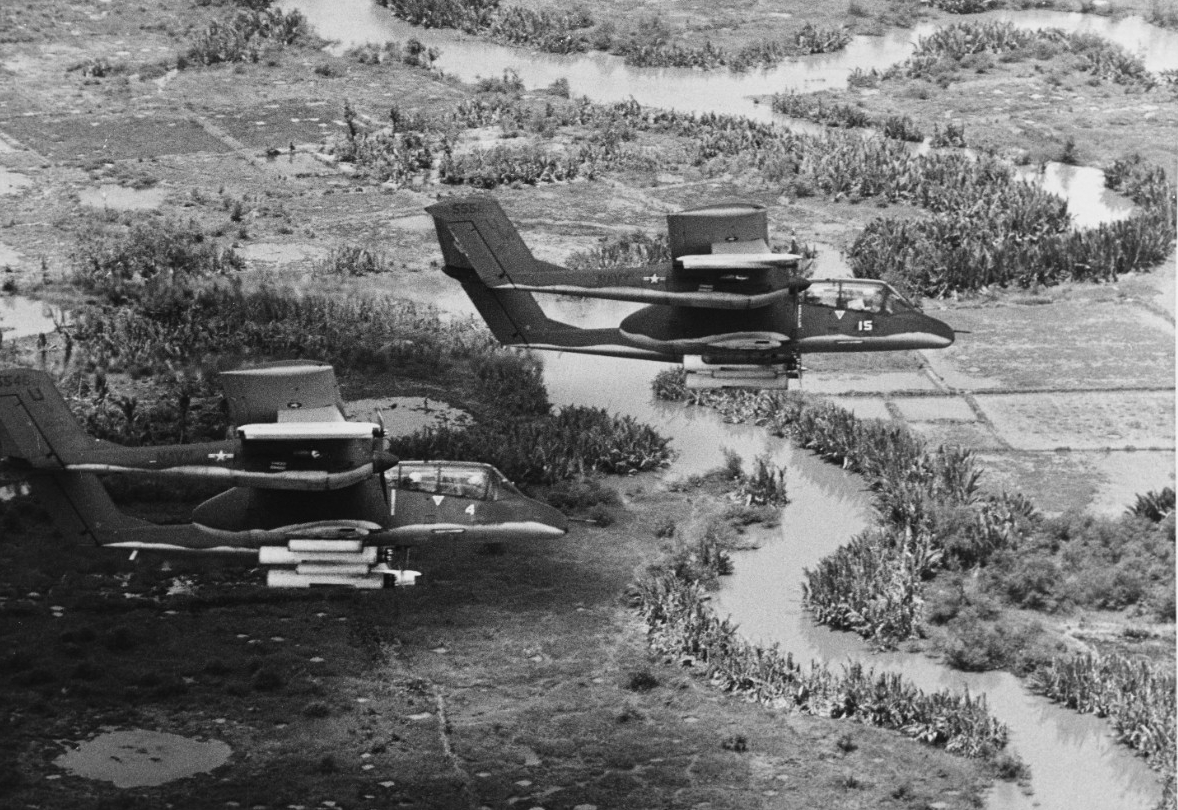 The golden anniversary of naval aviation was celebrated in 1961 along with a new stature of the fleet’s air arm as an effective fighting force. One nuclear-powered and two conventionally-powered attack carriers joined the operating forces, with two additional attack carriers commissioned by the end of the decade. The Navy acquired four new amphibious assault ships and other vessels to exploit the unique capabilities of helicopters in vertical assault and replenishment. New high-performance aircraft went into operation along with the development of vertical- and short-takeoff-and-landing aircraft. Innovative types of missiles appeared and Sparrows, and Sidewinders received enhanced capabilities. However, the importance of blimps and flying boats faded because of the advent of new technologies.

During the Cuban Missile Crisis, the Navy exerted its traditional role of sea control by imposing a naval blockade that proved instrumental in averting global thermonuclear war. The round-the-world cruise of a nuclear-powered task force and operations in the Indian Ocean carried the flag into foreign ports. Naval forces responded to crises in Africa, the Middle East, the Caribbean, and Berlin. Ships and aircraft aided the stricken when hurricanes, typhoons, and earthquakes struck in widely distant points.

In Vietnam, the nation responded to communist aggression with retaliatory air strikes that escalated into a protracted war of limited objectives and little relevancy to U.S. national security. The aircraft of the Seventh Fleet carried the burden of the naval air war in Southeast Asia.

The conquest of space began in earnest as manned orbital flight became a reality and culminated in the first manned lunar landing. Half the nation’s astronauts possessed Navy or Marine backgrounds and naval aviators made the first American suborbital and orbital flights. Satellites developed by Navy scientists expanded human knowledge of the cosmos, and a naval satellite navigation system provided an accurate means to all nations of traveling the earth’s oceans. Carriers or amphibious assault ships supported orbital missions to cover emergency landings and recovered astronauts and their spacecraft following reentry.

26 January 1960—The first of two giant unmanned balloons launched from Valley Forge (CVS-45) south of the Virgin Islands during Project Skyhook, the recording of cosmic ray activity. The balloons were nearly 50-stories tall, had a lifting gas capacity greater than that of rigid airship Akron (ZRS-4), and carried 2,500-pounds, including 800-pounds of film to perform the readings. The first balloon achieved an altitude of 116,000 feet and remained aloft for eight hours, while the second reached 113,000 feet during a flight of 26-½ hours. Early warning aircraft from Valley Forge and ashore tracked the balloons, and a destroyer recovered the instruments. The Office of Naval Research and the National Science Foundation jointly sponsored the project.

1 July 1960—An experimental DSN-1 successfully demonstrated the operating capabilities of a drone helicopter designed for use in antisubmarine warfare when it landed on board frigate Mitscher (DL-2) off the coast of Long Island, New York. A safety pilot manned the drone but remote control from ashore flew and maneuvered it around the ship and into position for a landing before the pilot took command and made the final touchdown.

5 February 1962—Navy Lt. R. W. Crafton and Capt. Louis K. Keck, USMC, flew an HSS-2 Sea King during the first officially sanctioned trial of a helicopter to exceed 200 miles per hour. Crafton and Keck broke the 15/25-kilometer world record with a speed of 210.65 miles per hour over a course along the Connecticut shore from Milford to New Haven. 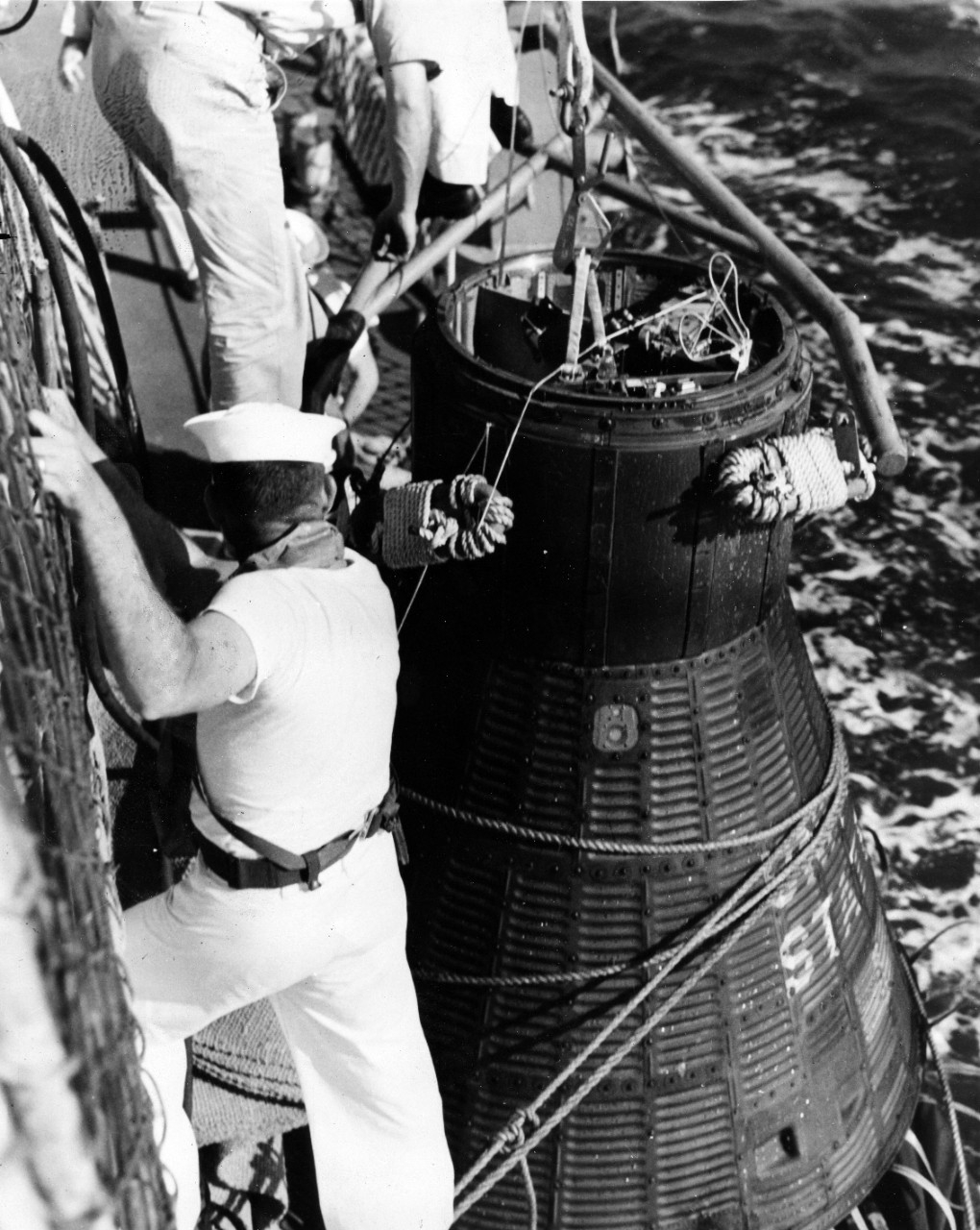 28 September 1962—A Navy flight photographed Soviet freighter Kasimov en route to Cuban waters with ten crated Ilyushin Il-28s on her deck. The Soviets eventually deployed at least 42 of Beagles, which were capable of carrying nuclear weapons, to Cuba. 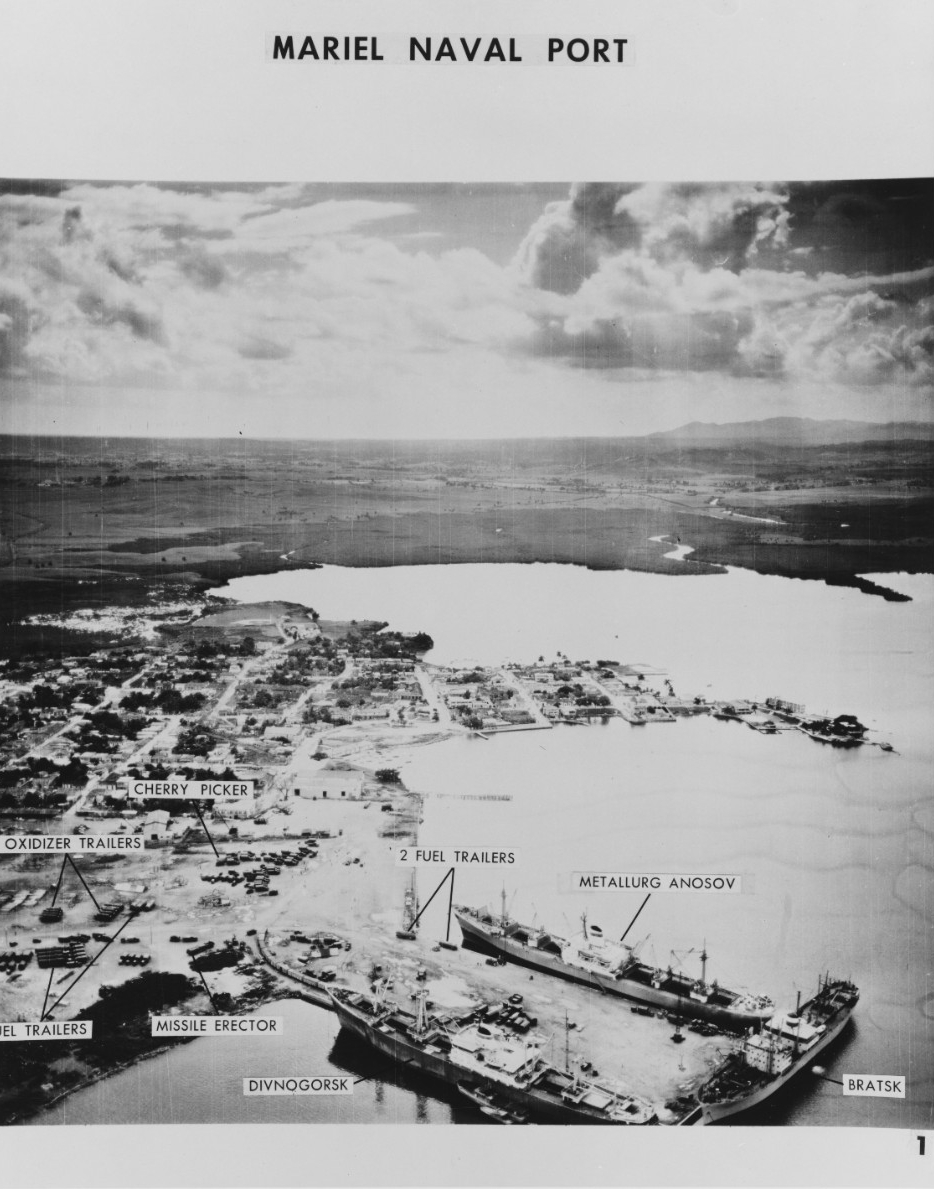 21 December 1968—Apollo 8, crewed by Col. Frank Borman, USAF, Capt. James A. Lovell Jr., and Maj. William A. Anders, USAF, launched from John F. Kennedy Space Center, Florida. Apollo 8 achieved all mission objectives, and the crew became the first humans to leave the earth’s gravitational field and to fly around the moon. On the fourth day, the astronauts temporarily lost communications as they passed behind the moon but became the first men to view its far side. On 27 December, the spacecraft made a predawn splash down in the Pacific within three miles of primary recovery ship Yorktown (CVS-10). As planned, aircraft and pararescue swimmers waited until local sunrise 50 minutes later, and then helicopters of HS-4 recovered and flew the crew to Yorktown.

3 March 1969—Initially attached to Fighter Squadron (VF) 121 and operated out of a trailer, the Navy’s Fighter Weapons School, also known as "Top Gun," is established. 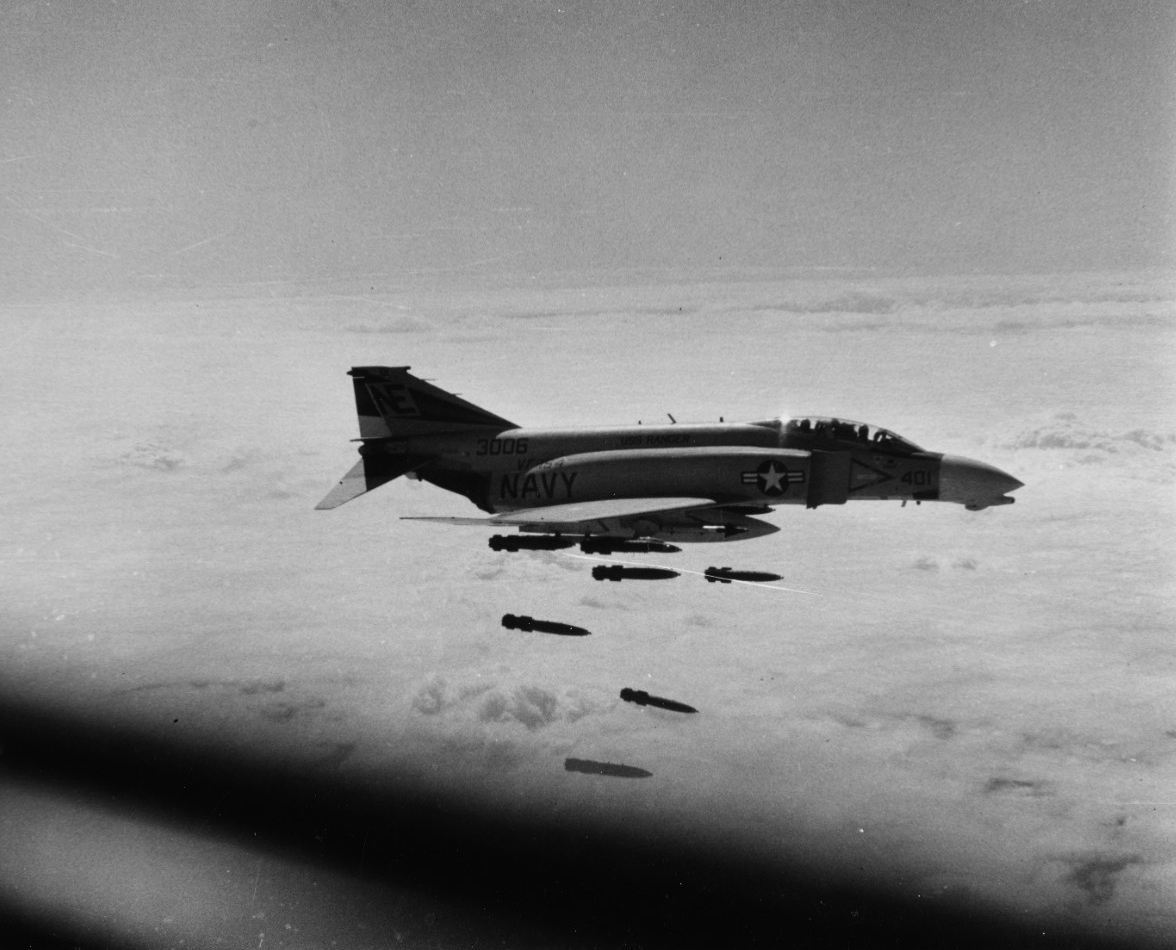 16 July 1969—Apollo 11, crewed by Neil A. Armstrong, Col. Edwin E. Aldrin Jr., USAF, and Lt. Col. Michael Collins, USAF, launched from John F. Kennedy Space Center, Florida. On 20 July, Armstrong and Aldrin in lunar module Eagle separated from command and service module Columbia and descended to the moon. “Houston, Tranquility Base here— the Eagle has landed,” Armstrong reported to mission control when the lunar module touched down on the moon at 4:18 p.m. At 10:56 p.m., a naval aviator became the first person to walk on the moon when Armstrong stepped onto the surface. 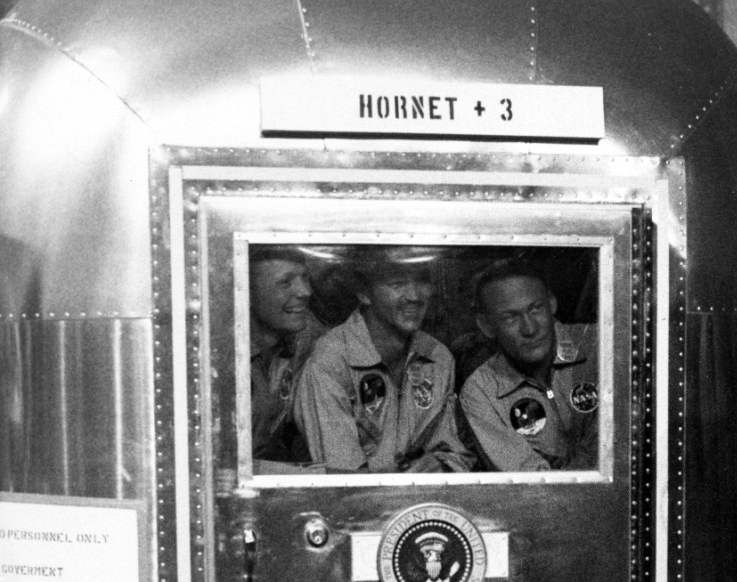 President Richard M. Nixon talks with the Apollo 11 astronauts, Neil Armstrong, Michael Collins and Edwin Aldrin, Jr., on the hangar deck of Hornet (CVS-12), in the Pacific Ocean, 24 July 1969. The astronauts are inside the mobile quarantine station that temporarily housed them after their return from the Moon. (Photographed by PHCS R.L. Lawson, official US Navy photograph, KN-18093) 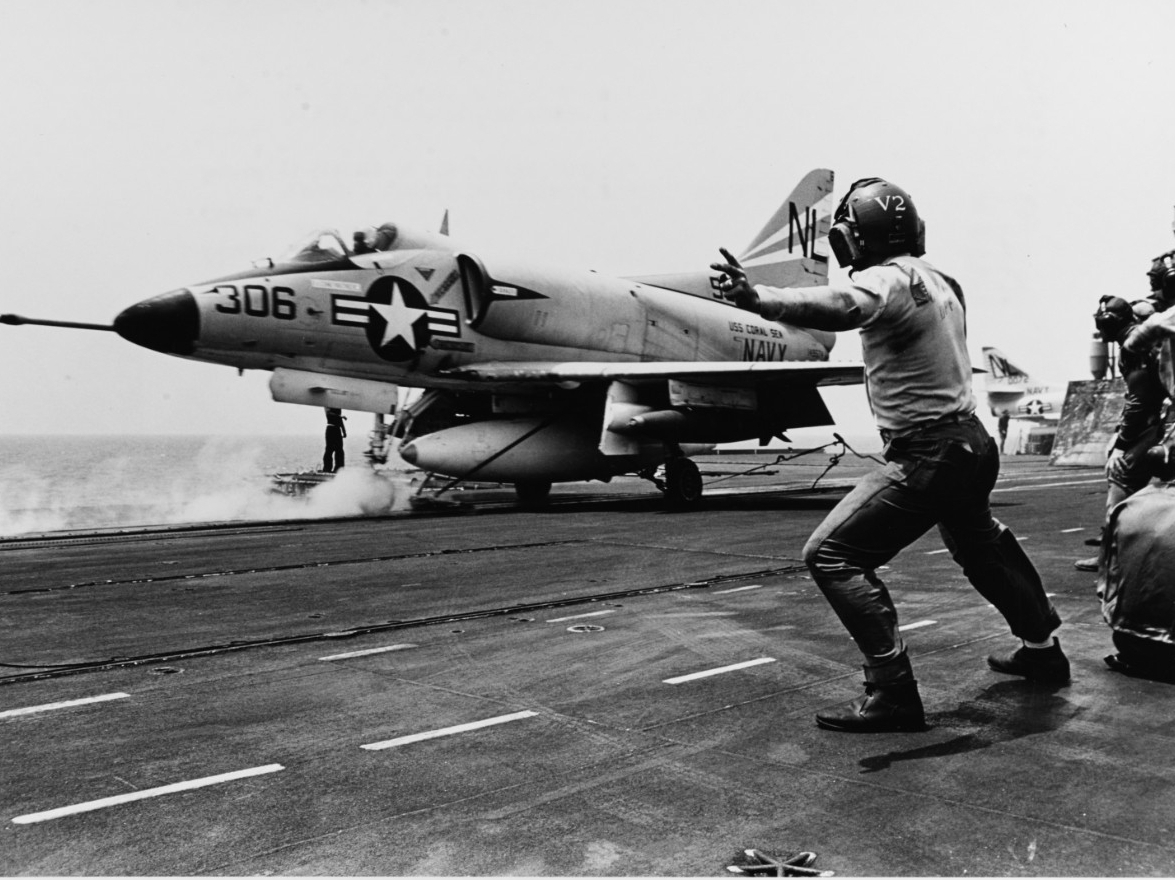 The catapult officer signals launch and an A-4 Skyhawk starts down the flight deck, during operations in the South China Sea, 24 March 1965. The plane is being launched from the carrier's starboard catapult. (Photographed by PH1 James F. Falk, USN, official US Navy photograph, USN 1111691-A)