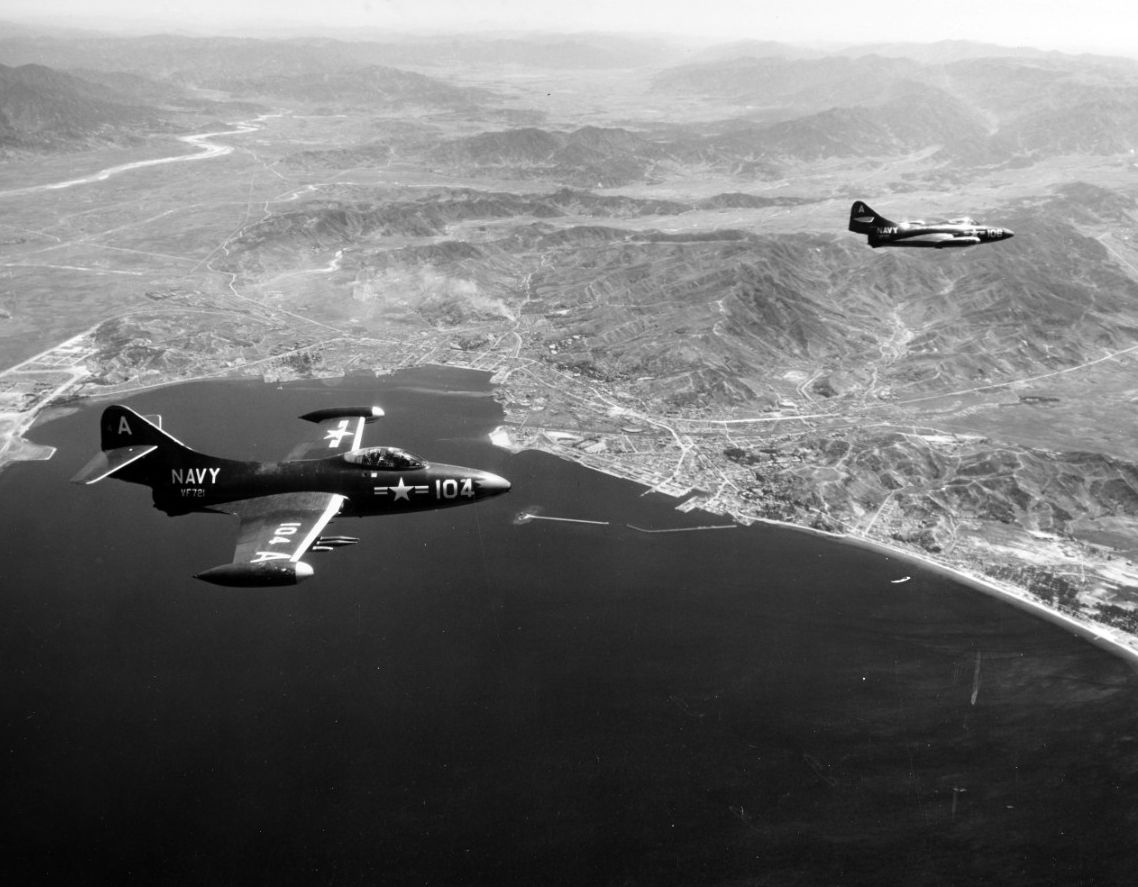 Grumman F9F-2 Panther fighters, of Fighter Squadron 721 (VF-721) from Boxer (CV-21) over Wonsan, North Korea, during the Seige of Wonsan. Photo is dated 15 July 1951. Note the five-inch rockets (with two different types of warheads) under the nearer F9F's wings. Wonsan port area is immediately behind that plane. Wonsan airfield is at left with the Namdae River beyond. (Official US Navy photograph, now in the collections of the National Archives, 80-G-431907)

The outbreak of the Korean War caught naval aviation in the midst of transition. The establishment of the National Military Establishment in 1947 and its reorganization in 1949, when it was renamed the Department of Defense, required adjustments that had not been completed by the outbreak of war. Successive budgetary decreases had reduced the size of the service, and a reorganization of operating forces to keep them within the prescribed limits had begun.

New weapons and equipment had not been fully integrated and tactical doctrine and operating techniques for their employment were still under development. The introduction of jet aircraft created a composite force in which either jet or propeller-driven aircraft that differed in performance characteristics, maintenance requirements, and tactical applications equipped comparable commands.

The seesaw clashes on the ground during the first six months of the war demanded flexibility of force. In addition, the need to sustain carrier air power over a landmass for extended periods imposed command and logistical burdens.

During the three years of war, Navy and Marine aircraft flew 276,000 combat sorties and dropped 177,000 tons of bombs. They reached within 7,000 sorties of World War II totals in all theaters, and surpassed the bomb tonnage by 74,000 tons.

Away from combat, advances in guided missile technology brought the new weapons into operational status. The ships and submarines to employ them readied for action. The launching of ships and  research missiles from shore installations provided useful data and experience.

7 February 1950—In a demonstration of carrier long-range attack capabilities, pilot Cmdr. Thomas Robinson took off in a P2V-3C Neptune from Franklin D. Roosevelt (CVB-42) off Jacksonville, Florida, and flew over Charleston, South Carolina, the Bahamas, the Panama Canal, up the coast of Central America, and over Mexico, landing the next day at Municipal Airport, San Francisco, California. The flight covered 5,060 miles in 25 hours, 59 minutes, the longest to date made from a carrier deck.

8 April 1950—Soviet aircraft shot down a PB4Y-2, BuNo 59645, of VP-26 Detachment A—based at NAS Port Lyautey, in French Morocco, but on patrol from Wiesbaden, West Germany—over the Baltic Sea off the coast of Liepaja, Latvia. Searchers recovered pieces of wreckage, but all ten men on board the Privateer died.

25 June 1950—Despite warnings from multiple intelligence sources, the North Koreans, achieving tactical surprise, invaded South Korea, initiating the Korean War. The United States asked for an emergency meeting of the UN Security Council, which then adopted a resolution condemning the North Korean aggression, demanded the withdrawal of North Korean troops above the 38th parallel, and called on all members to assist the UN in the execution of the resolution. The Soviets had boycotted the council in protest of ongoing American support of the Chinese Nationalists and the Soviets' absence prevented their veto of the motion. 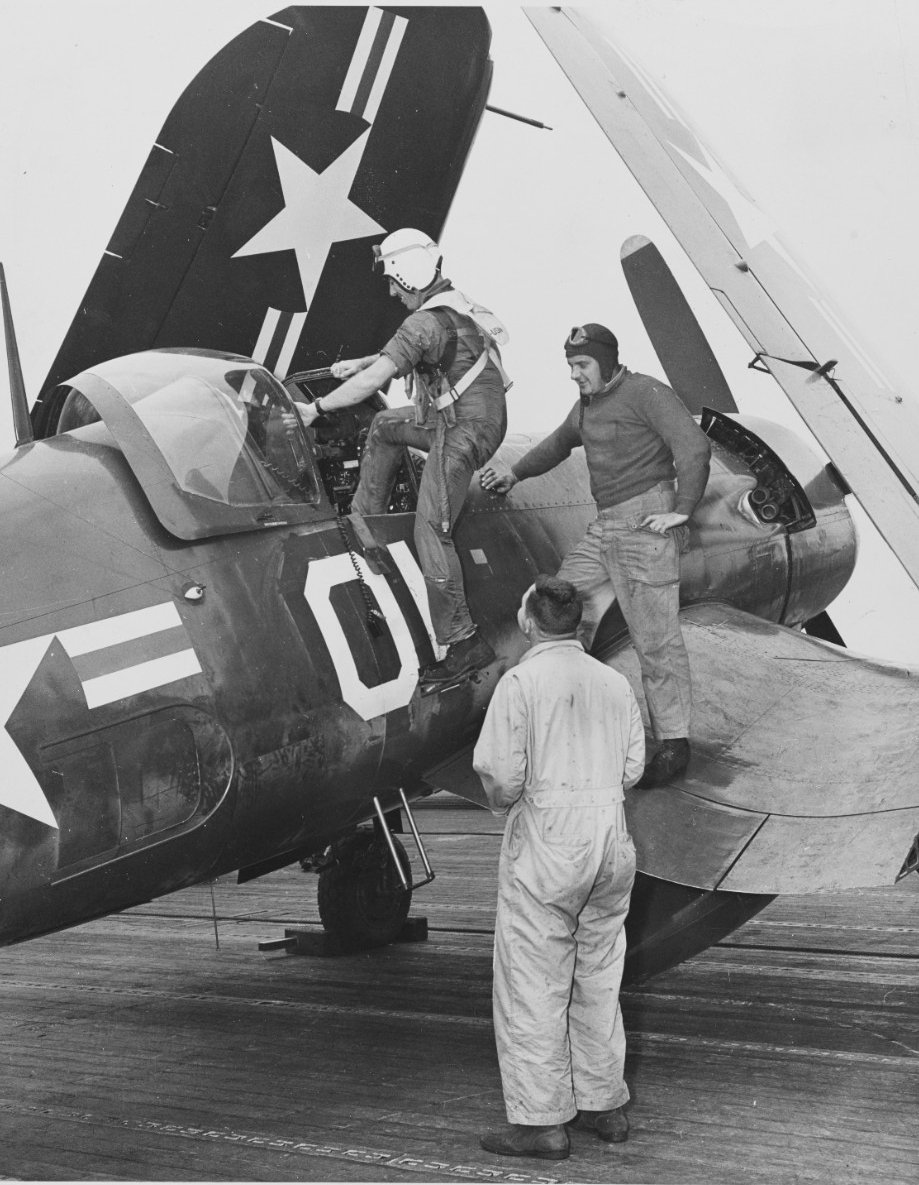 Capt. David Booker, USMC (left) mans his aerial reconnaissance plane on the flight deck of a US Navy aircraft carrier with the Seventh Fleet. Photo released on 19 July 1950. If the view was taken at about that time, the carrier would be Valley Forge (CV-45), then the only 7th Fleet carrier, which was engaged in early Korean War operations. Booker's plane is a Vought F4U-5P Corsair. Note its camera hatch low on the fuselage behind the cockpit. (Official US Navy photograph, from the All Hands collection at the Naval History and Heritage Command, NH96998)

4 December 1950—Ens. Jesse L. Brown of VF-31—the first African American to complete the Navy’s basic flight training program for pilot qualification and to be designated a naval aviator—embarked on board Leyte (CV-32), flew a close support mission in an F4U-4 Corsair over Hagaru-ri, North Korea. Antiaircraft fire struck the Corsair and he made an emergency landing beyond Chosin. As darkness approached and the temperature fell, his wingman, Lt. j.g. Thomas J. Hudner, deliberately crash-landed nearby and attempted to pull Brown from the burning wreck. With the buckled fuselage trapping the pilot’s legs, Hudner packed snow around Brown to protect him from the flames and returned to his aircraft to radio for a rescue helicopter. An HO3S-1 flown by 1st Lt. Charles C. Ward, USMC, of VMO-6 responded, and after repeated unsuccessful attempts to free Brown, had to leave him with the onset of nightfall. Brown died and Ward rescued Hudner, who subsequently received the Medal of Honor. 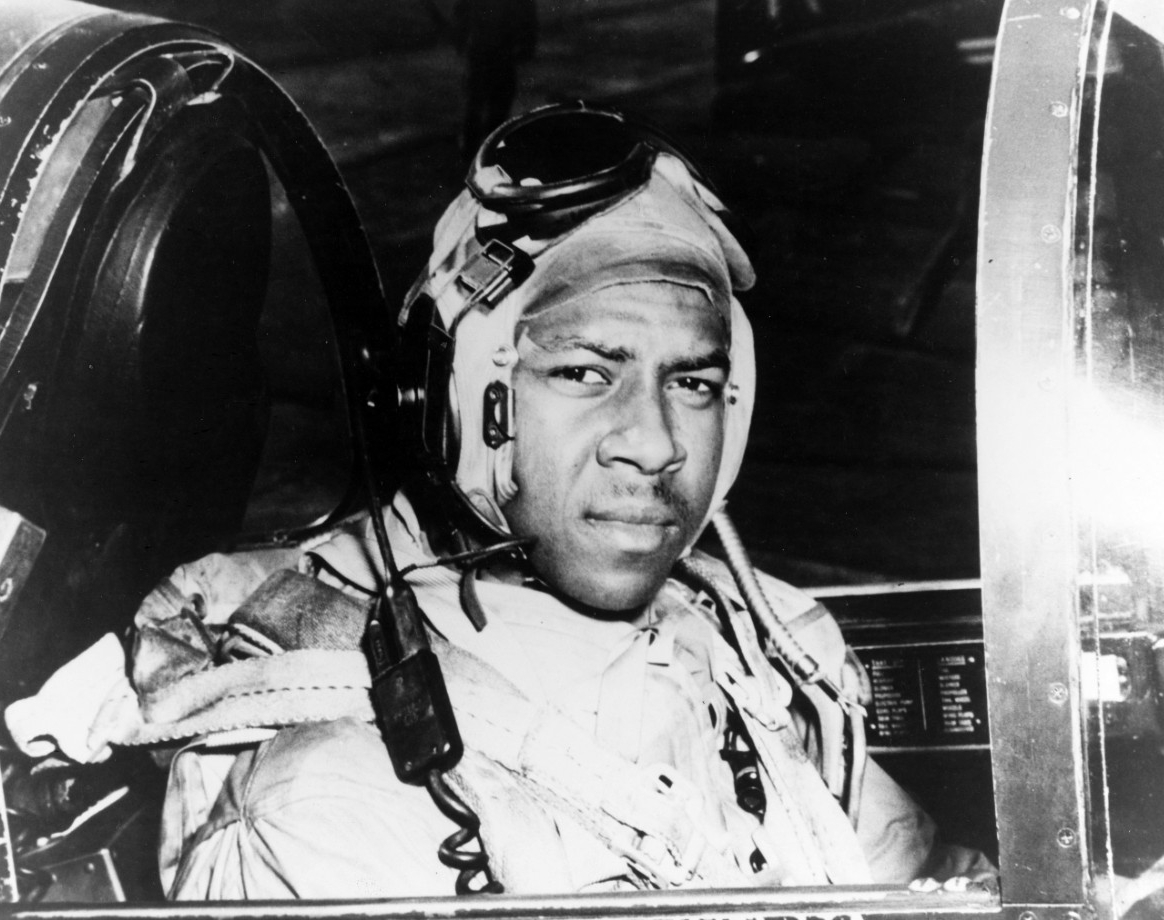 Ensign Jesse L. Brown, USN in the cockpit of an F4U-4 Corsair fighter, circa 1950. Jesse L. Brown was the first African American to complete US Navy flight training and the first African American naval aviator in combat and to be killed in combat. He flew with Fighter Squadron 32 (VF-32) from Leyte (CV-32). Ensign Brown received the Distinguished Flying Cross for his actions in Korea, and he was honored with ship Jessie L. Brown (FF-1089). (Official US Navy photograph, USN 1146845)

2 April 1951—Two F9F-2B Panthers of VF-191, each loaded with four 250- and two 100-pound general-purpose bombs, catapulted from Princeton (CV-37) to attack a railroad bridge near Songjin, North Korea. Their attack marked the Navy’s first recorded use of jet aircraft as bombers. 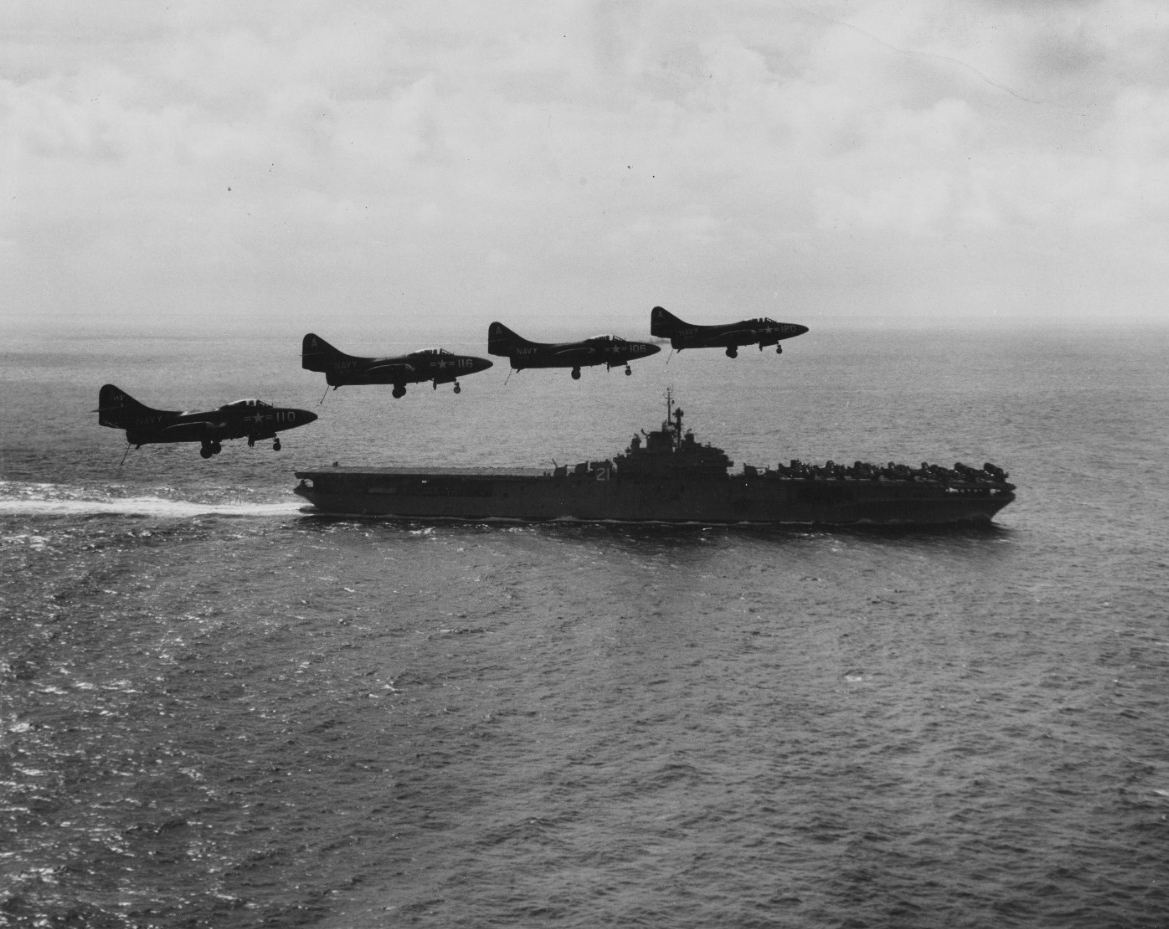 Four F9F-2 Panther jet fighters roar past the carrier, with dive brakes, landing gear and arresting hooks down, preparing to land on board after returning from a mission over North Korea, 23 June 1951. The planes and their pilots are from Fighter Squadron 721 (VF-721), a Naval Reserve squadron formerly based at Naval Air Station, Glenview, Illinois. (Official US Navy photograph, from the collections of the Naval History and Heritage Command, NH 97281)

11 July 1953—Maj. John F. Bolt, USMC, made his fifth and sixth MiG kills of the Korean War while operating with the 39th Fighter-Interceptor Squadron of the Fifth Air Force. He flew an F-86E Sabre named Darling Dottie, Serial No. 52-2852, when his second section of four aircraft turned for base because of low fuel. Bolt spotted four MiGs and despite diminishing fuel attacked, with his wingman, the enemy head-on and repeatedly engaged the MiGs. He became the first U.S. naval aviator to attain five victories in jet aerial combat and the only Marine ace of the Korean War. Bolt received the Navy Cross for this action. 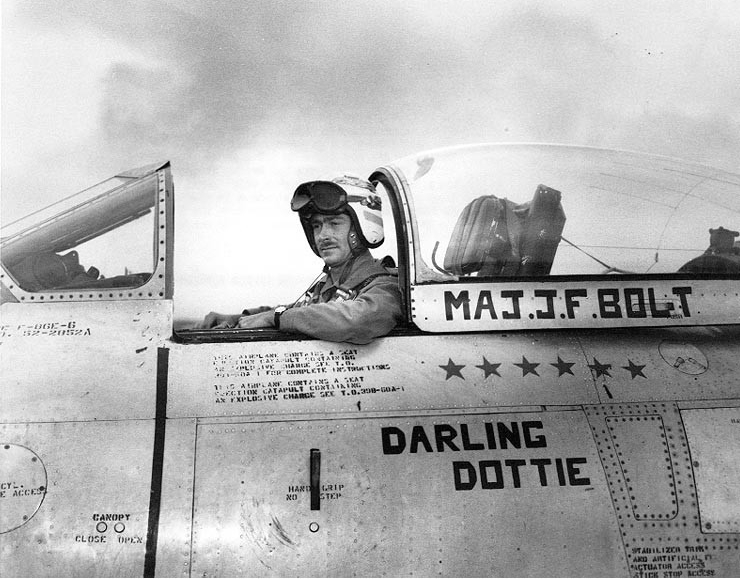 Major John F. Bolt, USMC, seated in a US Air Force F-86E Sabre jet fighter. This plane is an F-86E-6, serial # 52-2852. Note pilot's name painted on the canopy frame, with victory stars and nickname Darling Dottie painted below. Photo is dated 13 July 1953, two days after Major Bolt shot down his fifth and sixth MiG-15s to become the only US Marine Corps air Ace of the Korean War. He achieved the aerial victories while flying with the 5th Air Force as an exchange pilot. The original caption states, "Major Bolt, who shot down six Japanese planes during World War II, has flown 89 jet fighter-bomber missions with the 1st Marine Aircraft Wing, which has been assigned only close support and interdiction missions in Korea. He has flown 37 Saberjet sweeps with the 5th Air Force, which is carrying the air war to the MiGs." (Photographed by TSgt. Tom Donalds, US Marine Corps photograph, USMC A348324)

27 July 1953—United Nations and communist representatives signed an armistice at Panmunjom, Korea, which ended the major fighting of the Korean War. Isolated outbreaks occurred for years, however, because of North Korean violations of the agreement.

List of Patrol Squadron Deployments to Korea during the War 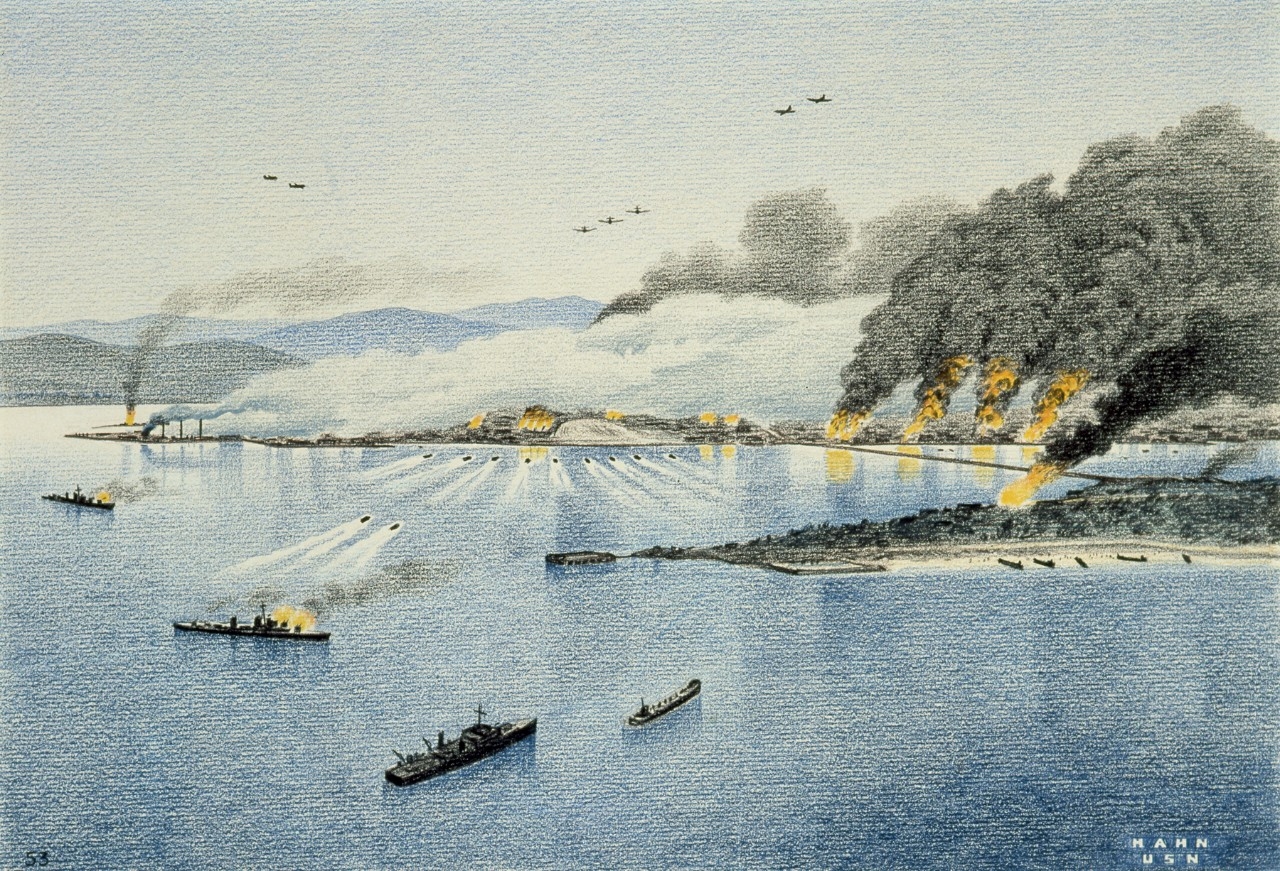 Inchon, South Korea. Because Inchon harbor was so shallow and muddy, the timing of the invasion had to be synchronized precisely with the autumn high tides so landing craft could make it to the shore without running aground on the mud flats. In addition, Wolmi-do (Wolmi Island) provided defenders with a strong garrison flanking the harbor. In spite of intelligence warning of the attack, the overextended North Korean army was unable to maintain a strong defense. The city fell with Allied losses of only 20 dead and 179 wounded. (Drawing, colored pencil on paper, by Herbert C. Hahn; circa 1951. (88-191-BB)