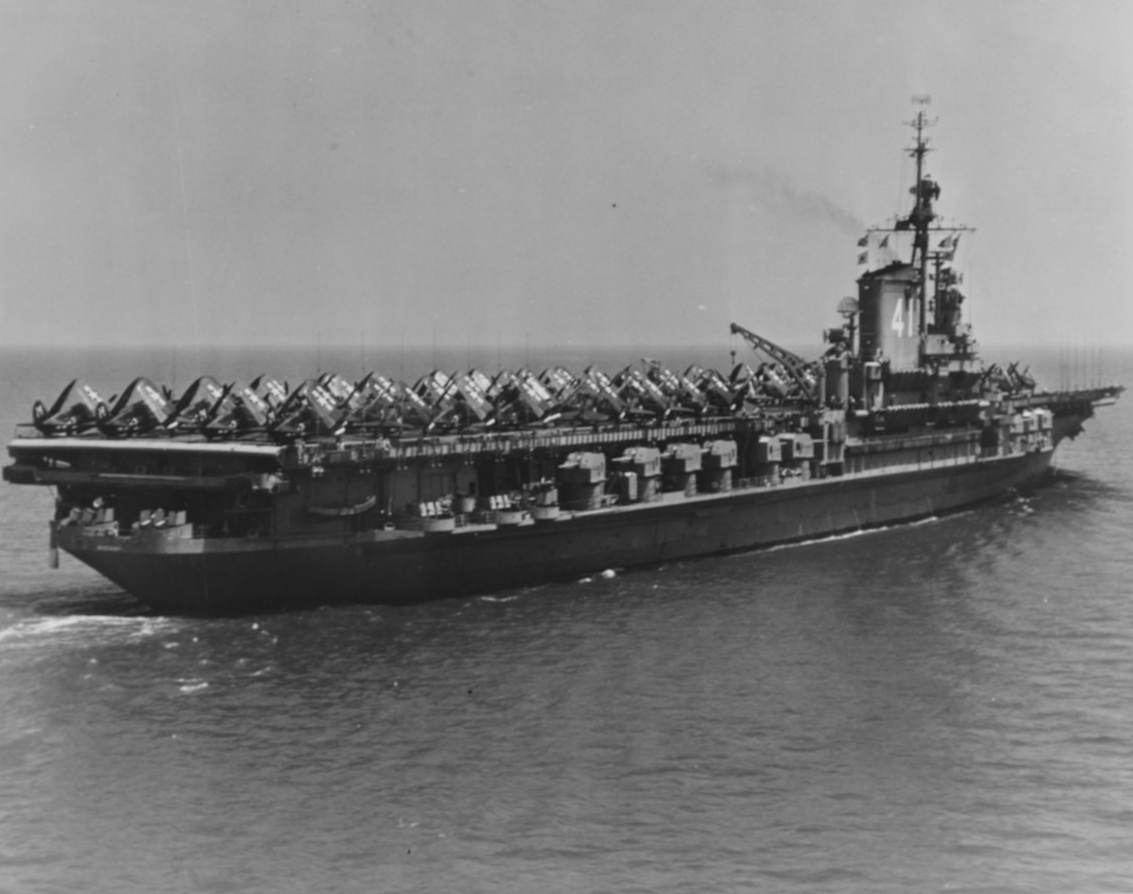 The problems of demobilization, organizational readjustment, and the tense beginning of the Cold War highlighted the years following World War II. Six years of war had exhausted the warring powers and brought the wartime alliance system to collapse. Two superpowers emerged into the ensuing void, the United States – led Western alliance and the Soviet-dominated Eastern Bloc, and their struggle for world mastery overshadowed the second half of the century.

American demobilization proceeded rapidly. Within a year after the end of hostilities, the on-board figures for the men and women who comprised naval aviation fell to a quarter of the wartime peak. Only a skeleton of the force remained to carry out the new operational demands. A task force built around one or two carriers sailed into the Mediterranean, and as the years passed, it became a fixture there. A similar force in the western Pacific provided the same tangible symbol of U.S. might and determination to support the free peoples of the world.

The introduction of jet aircraft posed special problems for carrier operations, and their employment renewed the dilemma that as navies developed increased-capability aircraft, they encountered the additional challenge of finding the means of taking them to sea. Technological and scientific advances built rapidly upon each other. New concepts included guided missiles, which had been introduced during World War II but were still in their embryonic development.

A constant readjustment in planning, the continual adaptation of force organization, and the repeated revision of tactical doctrine characterized this period. Some leaders clamored for a separate air force and for a merger of the services, which occurred by unifying them first, in 1947, and then, in 1949, under the Department of Defense. The armed forces also disputed their respective roles as they sought shares of a decreasing budget, and their chiefs raised old charges of duplication.

Critics of naval power renewed their declaration of navies as obsolete in the atomic era and shifted their derision from battleships to aircraft carriers by citing the ships’ expense and vulnerabilities. During the height of this controversy, the carrier United States (CVA-58), designed to carry Navy long-range attack planes, was canceled while under construction and the Secretary of the Navy resigned in protest, dubbed “the Revolt of the Admirals.” The Air Force publicly attempted to tell the Navy how to carry out its mission and what tools the sea service needed to accomplish its tasks. Congressional hearings ended the dispute. The outbreak of the Korean War in June 1950 generated more immediate problems but provided a greater national appreciation of the necessity for adequate military forces in face of the communist threat.

25 March 1946—The first twin-engine XHJD-1 helicopter, BuNo 43318, made a hovering flight. McDonnell Aircraft Corporation designed the helicopter for experimental use in a flight development program, and for tactical use in utility and air-sea rescue operations.

21 July 1946—In the first U.S. test of the adaptability of jet aircraft to shipboard operation, Lt. Cmdr. James J. Davidson made successful landings and takeoffs (non-catapulted deck launches) in an XFD-1 Phantom on board Franklin D. Roosevelt (CVB-42). 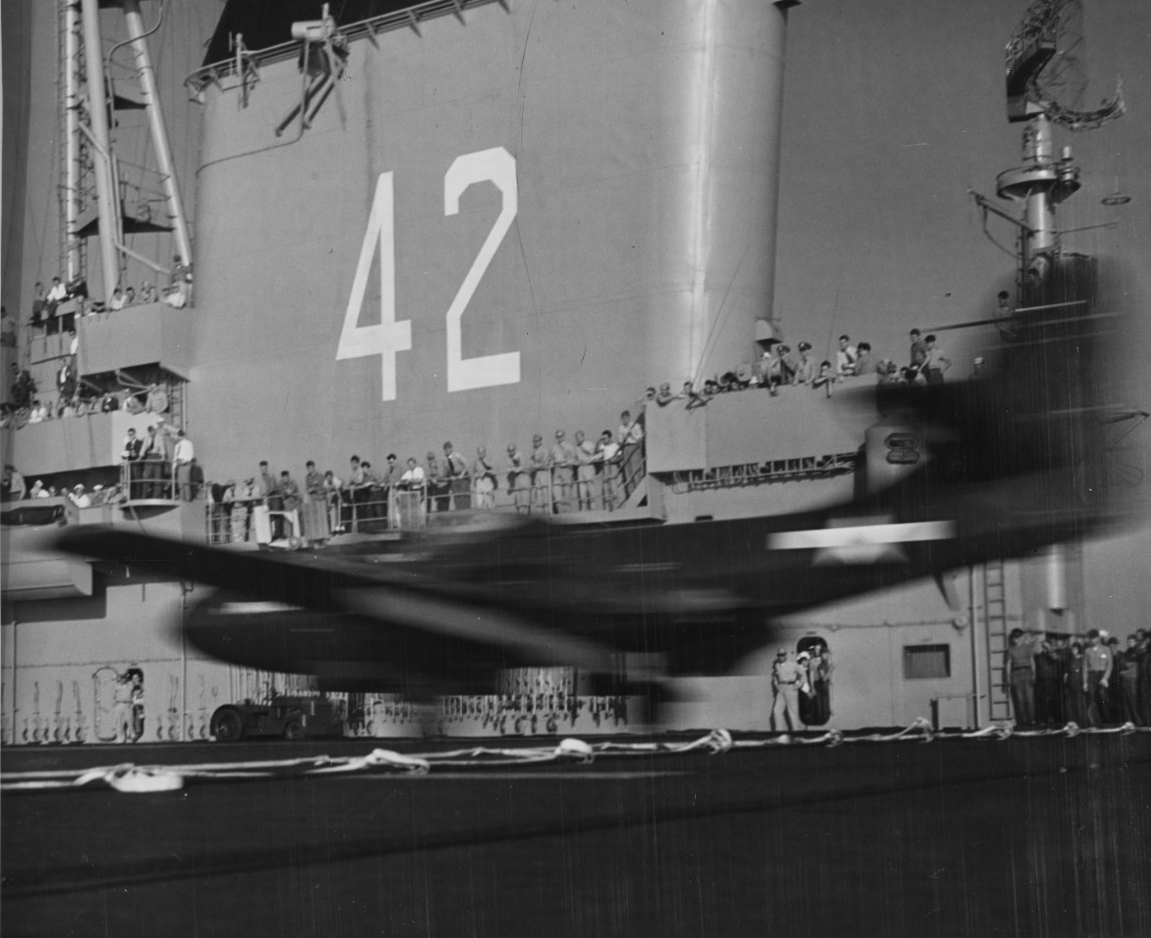 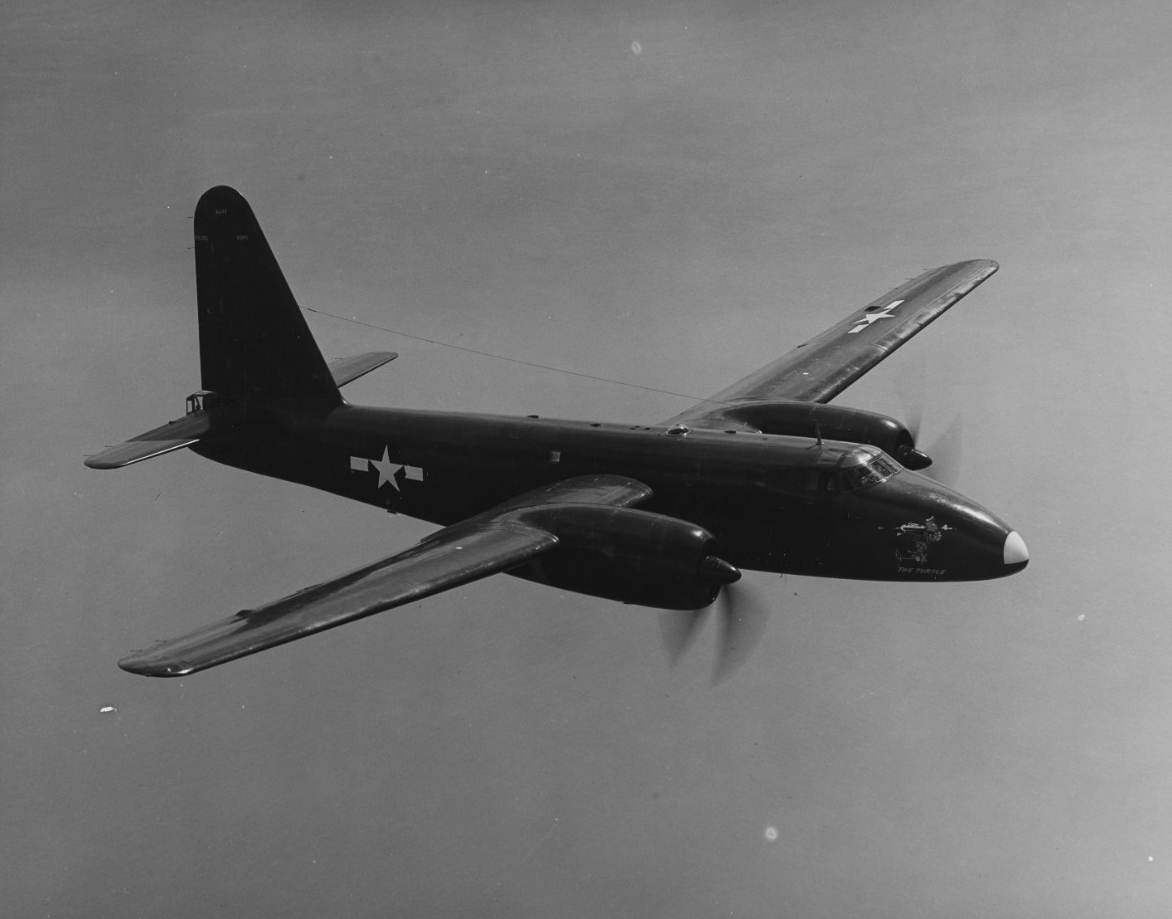 26 July 1947—President Harry S. Truman signed the National Security Act of 1947 into law. The measure provided the most basic reorganization of defense activities affecting the Navy Department since its creation in 1798. It established the National Security Council, Central Intelligence Agency, National Security Resources Board, and the National Military Establishment headed by the Secretary of Defense. Within the National Military Establishment, the Act redesignated the War Department as the Department of the Army and established a third service, the Air Force, along with the Joint Chiefs of Staff, Research and Development Board, and Munitions Board. In addition, the Act defined the Navy as “including such aviation as may be organic therein.”

10 March 1948—The carrier suitability of the FJ-1 Fury jet fighter was tested on board Boxer off San Diego, with a number of landings and takeoffs by Commander Evan P. Aurand and Lieutenant Commander Robert M. Elder of VF-5A. 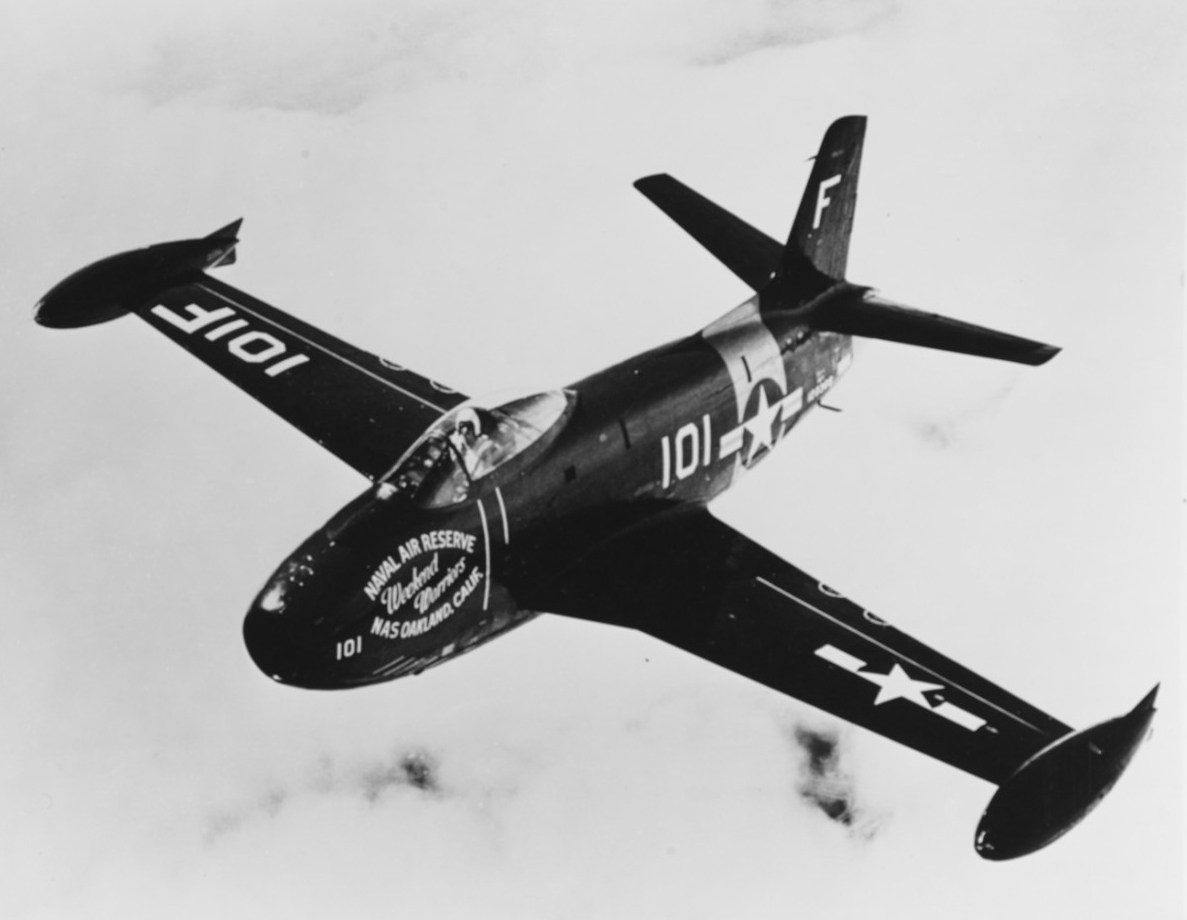 Conflict and Cooperation: The U.S. and Soviet Navies in the Cold War 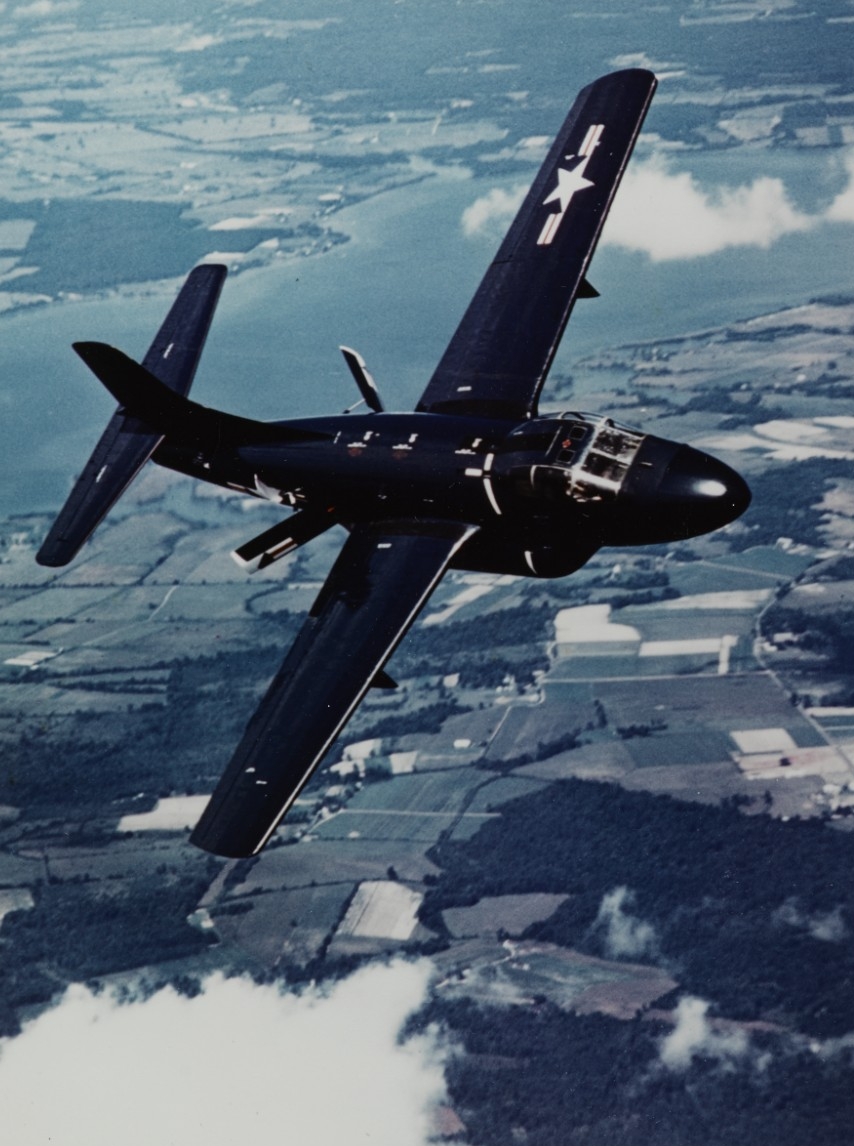