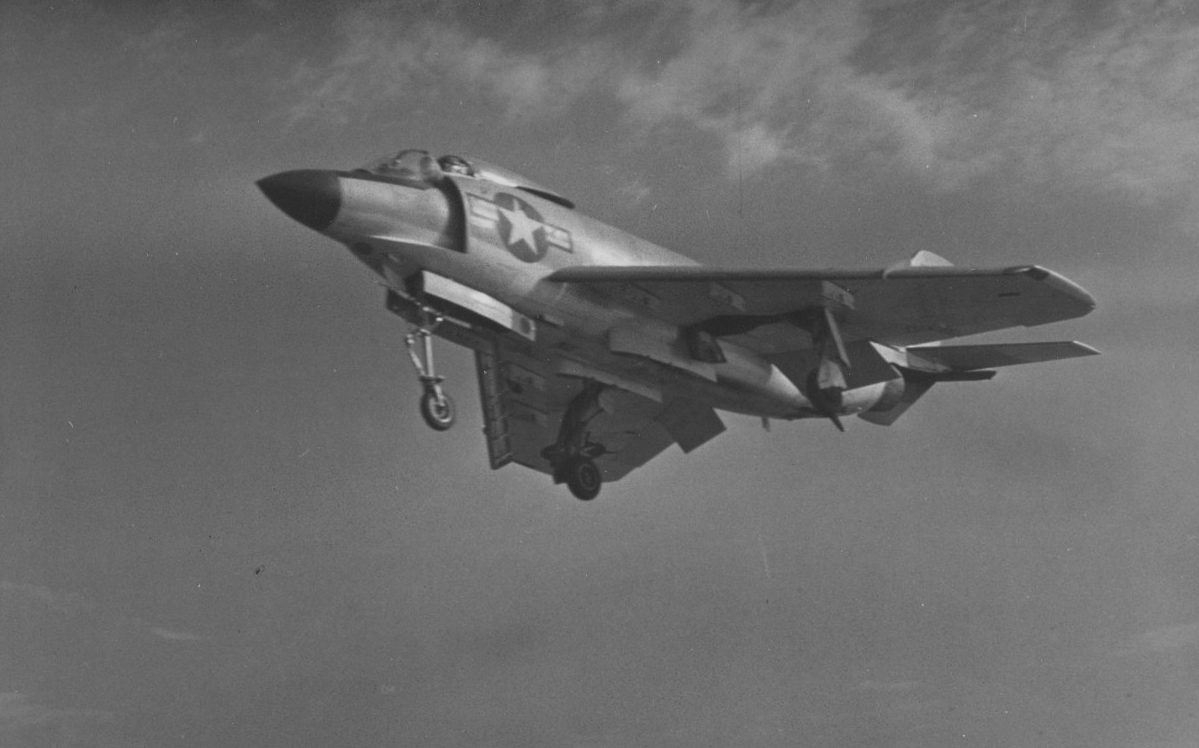 Despite the truce that ended large-scale fighting in the Korean War, global peace remained on unsteady footing. The two great superpowers, the United States and the Soviet Union, embraced divergent ideologies that led to repeated confrontations in the Cold War. The rivals expanded their nuclear arsenals, but the specter of global thermonuclear war compelled the adversaries to wage their struggle for supremacy through proxies.

The worsening situation in the Far East and a series of crises in the Middle East gave new importance to the traditional practice of deploying naval forces to trouble spots. On different occasions, these forces evacuated refugees, patrolled troubled waters, provided support to menaced nations, and presented a physical symbol of the free world.

Technological and scientific advances also marked the period. Guided missiles began to replace guns on board ships, the fleet increased capabilities to deliver nuclear weapons, aircraft speeds jumped from subsonic to supersonic, the adaptation of nuclear power to aircraft proceeded under investigation, and an increased knowledge of space affected naval operations.

Meanwhile Soviet achievements in space generated United States investigations regarding the state of the nation’s scientific advances, education, and progress in missilery. Successful orbiting of Explorer I, Vanguard, and other satellites, together with tests that demonstrated the feasibility of retrieving objects from orbit, prompted the launch of an astronaut training program in quest of putting a man in space.

1 June 1954—Cmdr. Henry J. Jackson launched in an S2F-1 Tracker from Hancock (CVA-19) in the initial operational test of the C-11 steam catapult. The tests continued throughout the month with the ship recording a total of 254 launches by Trackers, F2H-3/4 Banshees, F3D-2 Sky Knights, F7U-3 Cutlasses, FJ-2 Furies, and AD-5 Skyraiders. 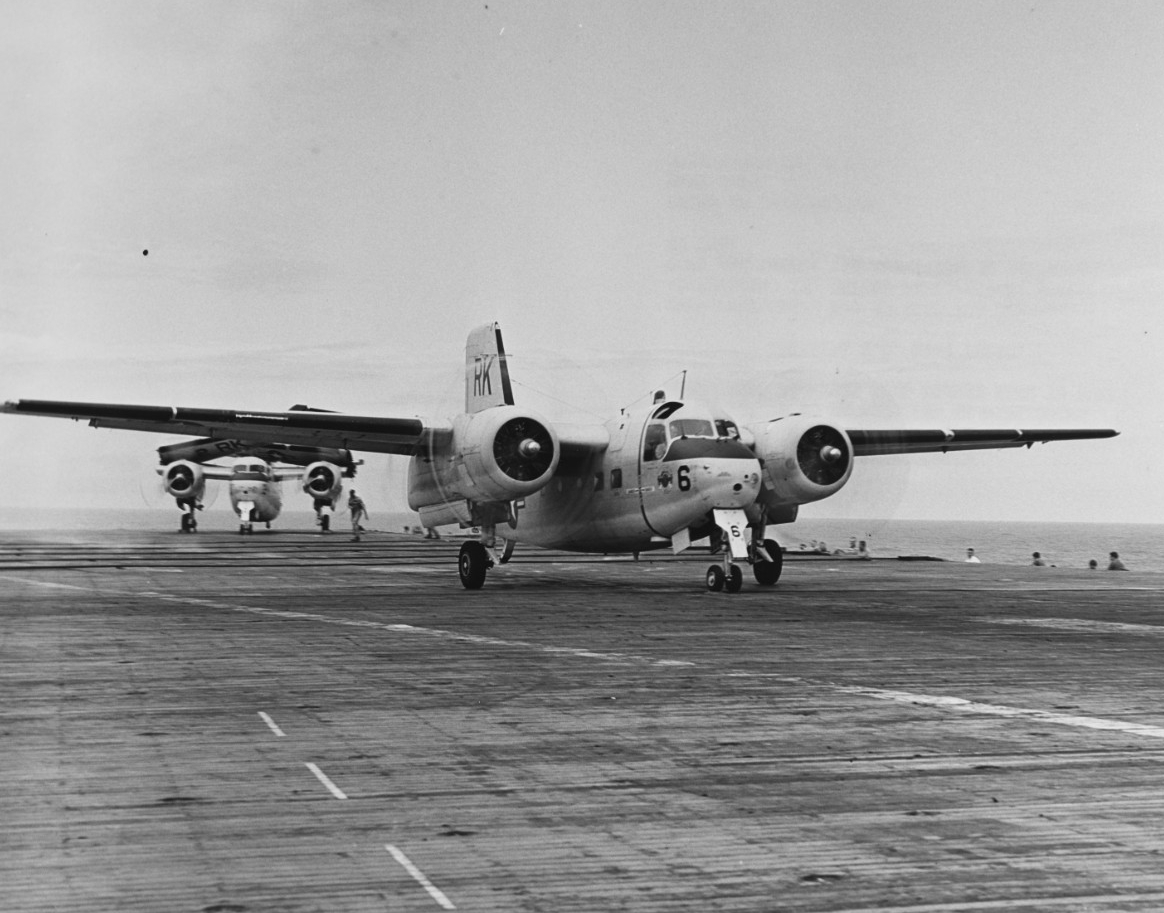 25 March 1955—An XF8U-1 Crusader exceeded the speed of sound during its first flight at Edwards AFB, California.

12 September 1955—The Navy announced the fitting of all the fighters in production with in-flight refueling gear, thus establishing the technique as a standard operational procedure.

21 August 1956—Cmdr. Robert W. Windsor Jr. captured the Thompson Trophy with a new national speed record of 1,015.428 miles per hour in an F8U-1 over a 15-kilometer course at NOTS China Lake, California. This production model Crusader carried its normal armament of 20mm cannon and dummy ammunition during the record performance, making it the first operationally equipped U.S. aircraft to fly faster than 1,000 miles per hour. 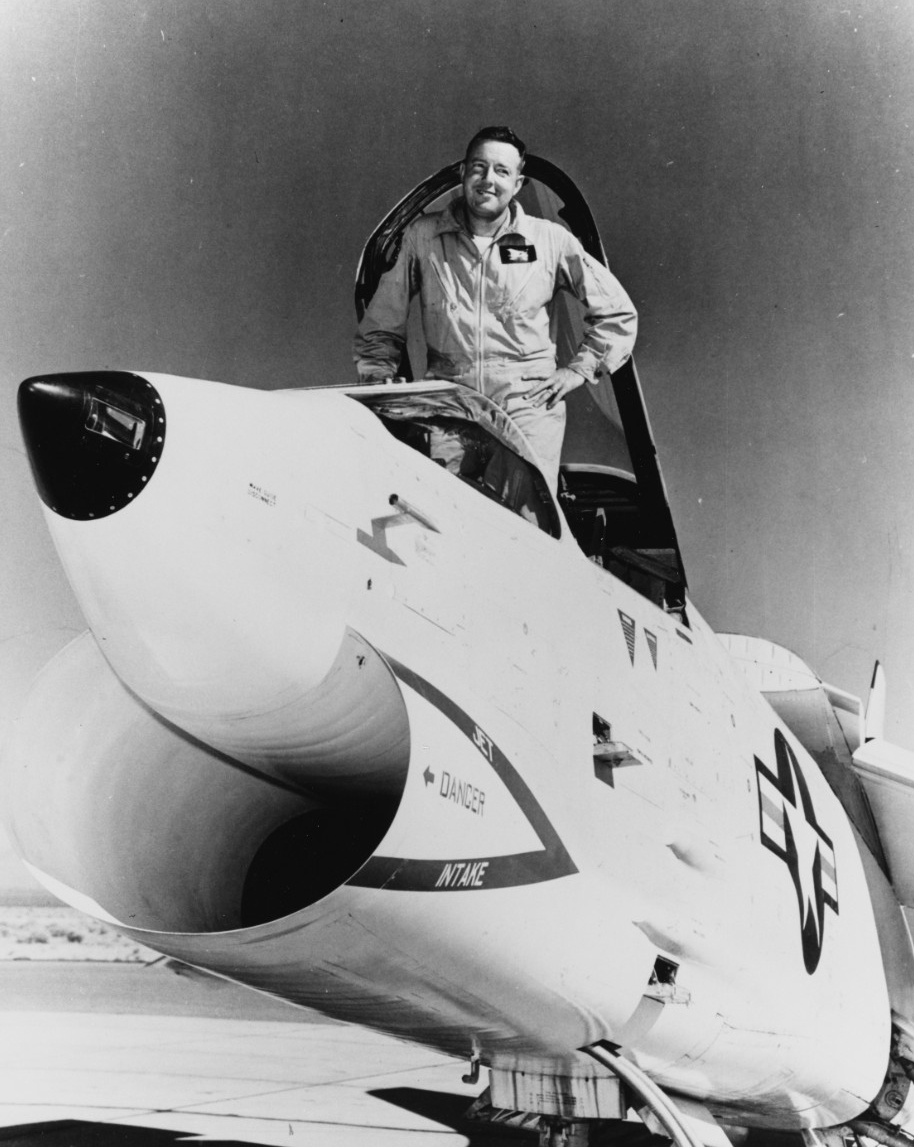 8 November 1956—Lt. Cmdrs. M. Lee Lewis and Malcolm D. Ross bettered the existing world altitude record by soaring to 76,000 feet in a Navy Stratolab balloon over the Black Hills of South Dakota. The duo received the 1957 Harmon International Trophy for Aeronauts for this record ascent, which was intended to gather meteorological, cosmic ray, and other scientific data necessary to improve safety at high altitudes. 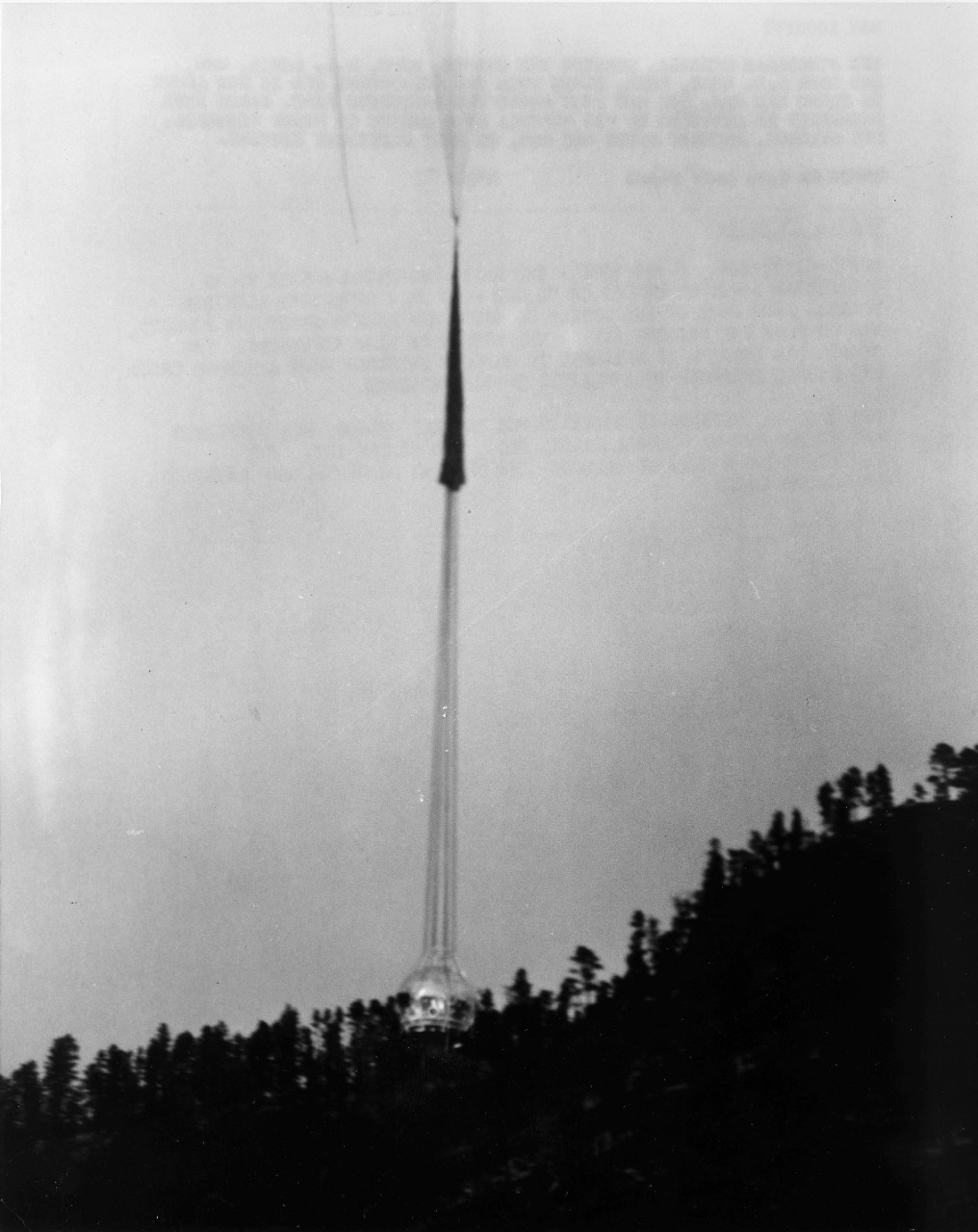 Strato-Lab Gondola's parachute Rapid City, South Dakota, 8 November 1956. The Strato-Lab Gondola rises from the Stratobowl and is now about to clear the rim, some 400 feet above the launch site. The balloon, already above the rim, is only partially visible. On this date, two naval observers soared to an unofficial altitude record of 76,000 feet in a spherical aluminum gondola from part of the Office of Naval Research's Strato-Lab Project, was to test the feasibility of the system at high altitudes. The Strato-Lab program was designed to conduct research from a manned space laboratory attached to a plastic skyhook balloon. The Gondola, originally designed for Project Helios, was completed and fitted out by General Mills, Inc. (USN 1000148)

4 March 1957—Cmdr. Jack R. Hunt commanded a ZPG-2 blimp during a flight from NAS South Weymouth, Massachusetts, that circled over the Atlantic Ocean toward Portugal and the African coast and landed on 15 March at NAS Key West, Florida. This set a new world record in distance and endurance by covering 9,448 statute miles and remaining airborne without refueling for 264 hours, 12 minutes. Hunt received the 1958 Harmon International Trophy for Aeronauts. 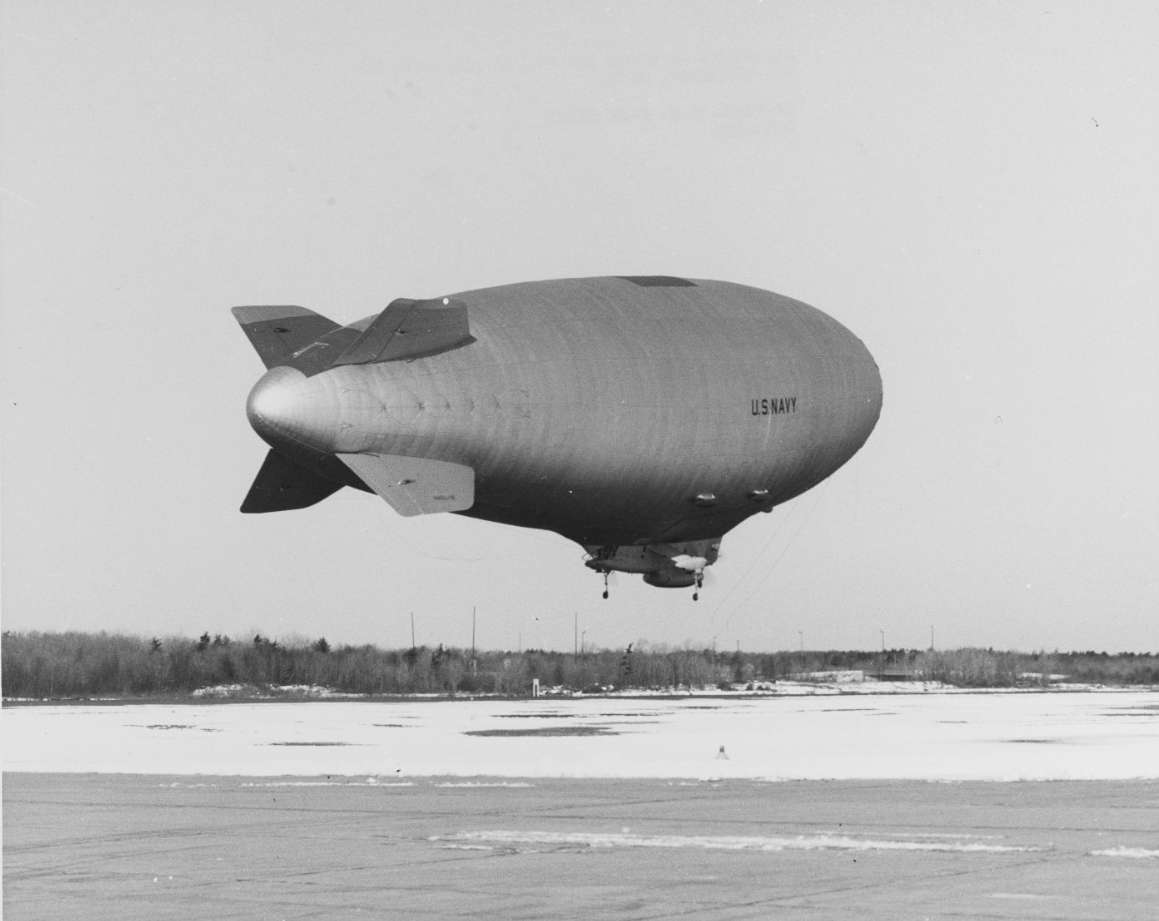 1 May 1957—A two-stage rocket consisting of the first stage of a Viking and a prototype of the Vanguard third stage launched in the second successful test of components of the Vanguard earth satellite launching vehicle from Cape Canaveral, Florida. 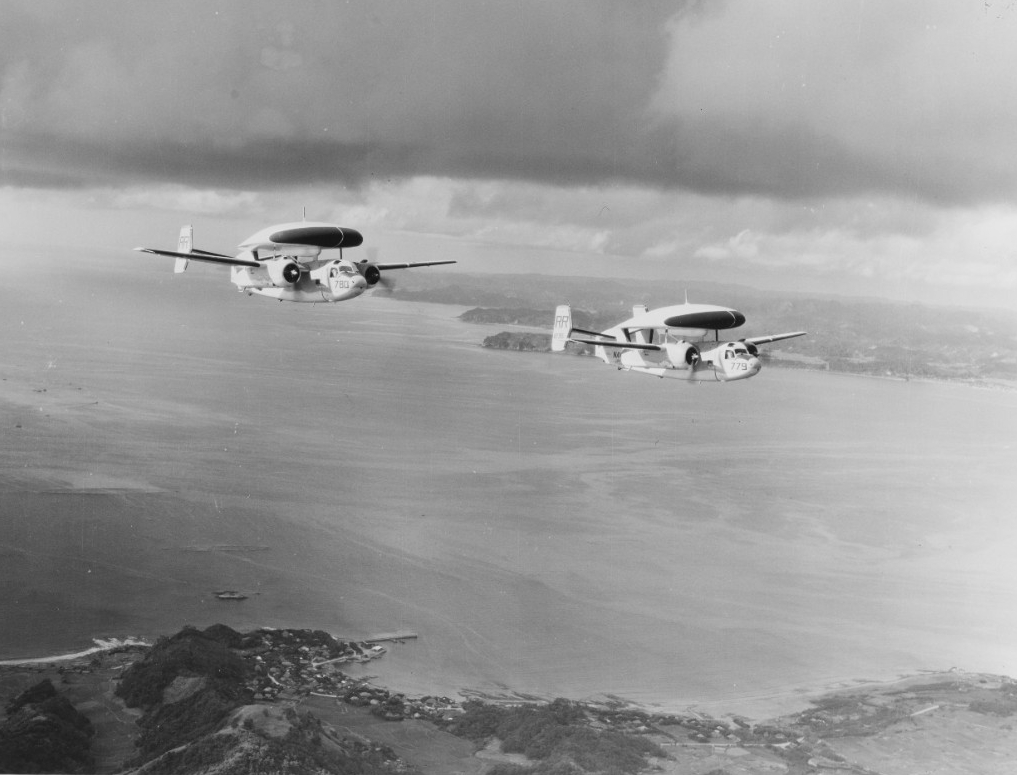