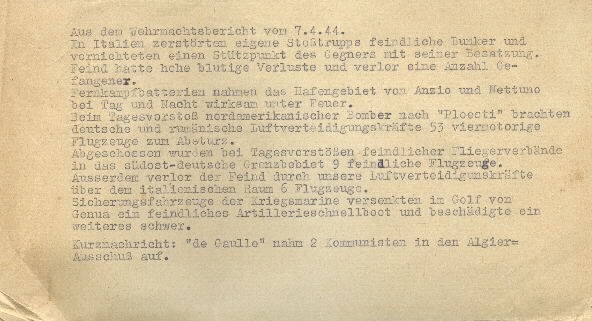 Excerpt from the Wehrmacht report on 7 April 1944

In Italy, enemy bunkers were destroyed by our own raiding parties and an enemy’s base including its crew was annihilated. Enemy had a high blood count and lost a number of POWs.
Artillery batteries successfully took the port areas of Anzio and Nettuno under fire during the day and the night.
At the daylight advance of North American bombing aircraft to “Ploesti,” German and Romanian air defense forces caused 53 four-engine aircraft to crash.
Nine enemy planes were shot down during the daytime advances of enemy aircraft formations in the southeast German border area.
Furthermore, the enemy lost 6 planes through our air defense forces in the Italian area.
Escort vessels of the Kriegsmarine [German Navy] sunk a fast enemy artillery vessel in the Gulf of Genoa and severely damaged another one. 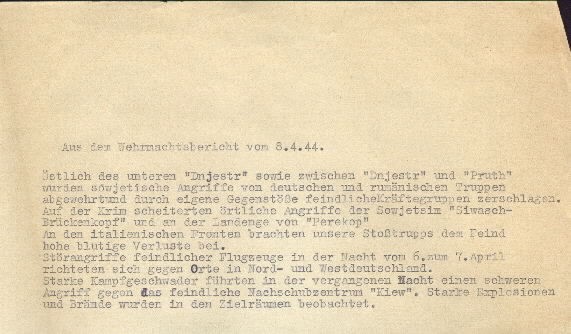 Excerpt from the Wehrmacht report on 8 April 1944

East of the lower “Dnjestr” as well as between “Dnjestr” and “Pruth,” Soviet attacks were warded off by German and Romanian troops and pockets of enemy forces were broken up by our counter attacks.
On the Crimea Peninsula, local attacks of Sowjetsim [possibly a Russian Armed Forces battalion] “Siwasch bridgehead” and on the bottle neck of “Perekop” failed.
On the Italian fronts, our own raiding parties caused the enemy to have a high blood count.
Disruptive attacks of enemy planes were directed towards cities in Northern and Western Germany in the night from 6 April to 7 April.
Heavy fighting squadrons lead a strong assault on the enemy supply center of “Kiev.” Heavy explosions and fires were observed in the target areas.

Excerpt from the Wehrmacht report on 9 April 1944

On the “Narwa front,” strong enemy forces were encapsulated and destroyed in the course of eliminating an older breach.
Continuation of heavy fighting northwest of “Odessa.” Romanian security forces are in the middle of the fight in the eastern “Bokuwina,” facing a slowly advancing front.
Heavy air battles took place on noon of 8 April during the attack of USA bomber airplanes on central German territory.
Eighty-seven planes, including 65 four-engine bomber planes, were shot down by fighter planes and flak.
At Tarnopol, intense battles in the streets are still going on. The defenders are in a heavy defensive fight against the enemy which entered the city.
Yesterday, in the eastern “Bukowina,” German-Romanian troops once more performed successful defensive action against the broad advance of the enemy. 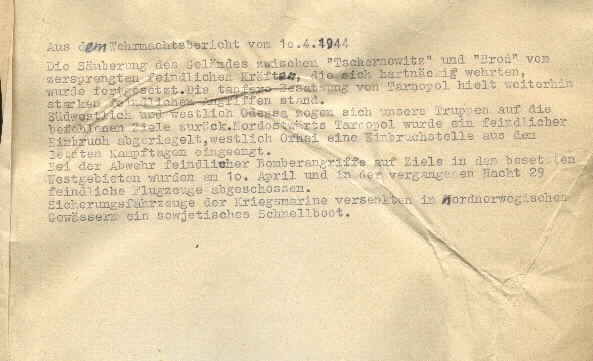 Excerpt from the Wehrmacht report on 10 April 1944

Vicious fighting continued during the clearing of enemy pockets between “Tschernowitz” and “Brod.” The brave defenders of Tarnopol continued to repell strong enemy attacks.
Southwest and west of Odessa, our own troops regrouped near their targets as ordered. Northeast of Tarnopol an enemy intrusion was sealed, west of Orhei an intrusion dating back to earlier battle days was closed in on.
During attacks of enemy bombers on targets in the occupied Western areas, 29 enemy aircraft were shot down on 10 April and last night.
Escort vessels of the German Navy sunk a Soviet fast patrol boat in North Norwegian waters. 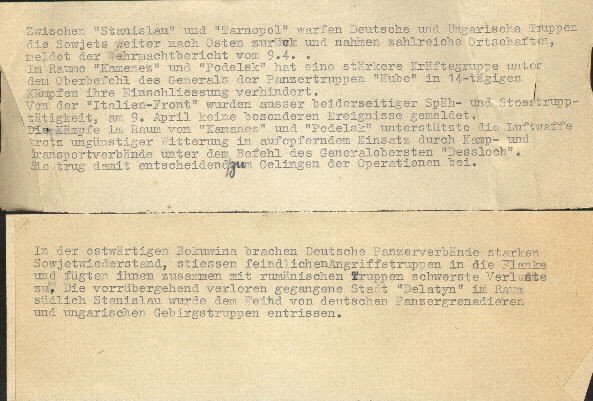 Between “Stanislau” and “Tarnopol,” German and Hungarian troops continued to throw back Soviet troops into the East and took over numerous towns, reported the Wehrmacht on 9 April.
In the area of “Kamenez” and “Podelsk,” a stronger force group under the command of the general of armored forces [Hans] “Hube” avoided encirclement during 14 days of battle.
On the Italian front, aside from reconnaissance and raiding parties by both sides, on 9 April no events were reported.
The battles in the area of “Kamanez” [notice the difference in the spelling] and “Podelsk” were supported by German Air Force fighting and transport aircraft in a dedicated effort, despite unfortunate weather, under the command of [Generaloberst] “Dessloch”.
It contributed greatly to the decisive success of the operations.

In the eastern Bokuwina, German tank forces broke through strong Soviet opposition, and advanced into the flank of enemy forces in joint action with Romanian troops, and were responsible for grave losses [to the enemy]. The city of “Delatyn” south of Stanislau, temporary lost to the enemy, was wrested from the enemy’s hands by German armored infantry and Hungarian mountain troops.

Excerpt from the Wehrmacht report on 21 April 1944

Repeated attacks of the Bolsheviks were countered by destroying a larger number of tanks northeast of “Sevastopol.”
36 enemy aircraft were destroyed during air battles, 20 enemy airplanes were annihilated on the ground. The squadron leader in one battle group, Lieutenant-Colonel “Smola”, excelled during this mission.

Excerpt from the Wehrmacht [German Army] report on 22 April 1944

The Reichsmarshall [Hermann Göring?] announced, among other things, in a daily order to the Wehrmacht: “The fate of the German people is in our hands alone. Our gift to the Führer is our utmost and decisive effort so that the future of the Reich is secure.”

It was officially announced that the War’s Winter Help Association [Winterhilfswerk], during the winter of 1942/1943, received donations amounting to more than 1.5 billion Reichsmark. This is the 10th [annual campaign] of its kind since the composition of this self-help action of the German people. 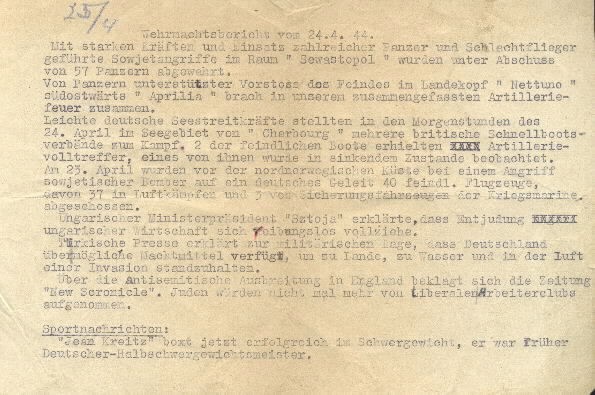 Soviet attacks by heavy forces and the use of numerous tanks and battle aircraft in the area of “Sevastopol” were repelled [by Axis Forces] which destroyed 57 tanks.
Tank-supported advances by the enemy on the bridgehead of “Nettuno” southeast of “Aprillia” broke apart under our own massive artillery fire.
In the morning hours of 24 April, light German Navy vessels encountered several British fast-patrol boat squadrons and engaged them in a battle near the area of “Cherbourg.” Two of the enemy vessels received direct artillery hits, one of which was seen sinking.
On 23 April, during an assault of Soviet bombers on a German convoy in northern Norwegian waters, 40 enemy aircraft were shot down, 37 in air combat and 3 by German Navy escort vessels.
Hungarian Prime Minister “Sztoja” announced that the de-jewification of the Hungarian economy is running smoothly.
Turkish press announced due to German military readiness, Germany would have the means to withstand an invasion on the ground, at sea and in the air.
The [British] newspaper News Chronicle complains about the spread of anti-Semitics in England. Jews would not even be permitted in liberal working class clubs.

Excerpt from the Wehrmacht report on 27 April 1944

The enemy continues his assaults near the lower “Dnjestr.” Attempts to intrude were repelled at a high cost to the enemy. North of “Jassy,” Soviet forces moved to attack. They failed due to the German-Romanian defense. Local intrusions were sealed off. In the area of Sevastopol, only failed Soviet attacks. South Italy’s bridgehead Nettuno is leading own local assaults to improve the front. Counter-attacks by the enemy unsuccessful. Southern front: use of expeditionary forces on both side.

Twenty-one enemy aircraft were destroyed in the skies of the Western areas last night. German fast-patrol boat groups sunk three ships with 9.100 tons on the morning of the 28th off the coast of Southern England. Torpedoes were launched against one destroyer and another vessel of 200 tons which must be assumed sunk. In the aftermath of a meeting with the Führer [Adolf Hitler], the Duce [Benito Mussolini] visited one of the newly formed Italian divisions. Under German supervision, these divisions will be equipped taking into account the most recent experiences.
In the far North, several strong artillery advancements by the enemy were thrown back with high losses for the Soviets.

Our own attacks won further ground on 29 April between the upper "Dnjnestr" and the Carpathian mountains despite strong resistance by the Soviets. Heavy enemy attacks were countered by Hungarian divisions.
During a large attack against “Plymouth” and concentrations of ships off the British south-western coast, heavy German battle groups produced a strong effect on the enenmy.