Translation of these engineering reports from U-138 are courtesy of Stephen Paul Revai, a graduate of the Language Specialists International, Berlin.

Document Captured on U-505

[The War Diary of U-138 from 8 October 1940 to 14 November 1940. During this patrol, the U-138 was commanded by Wolfgang Luth, one of the most successful and highly decorated U-boat commanders of the war.] 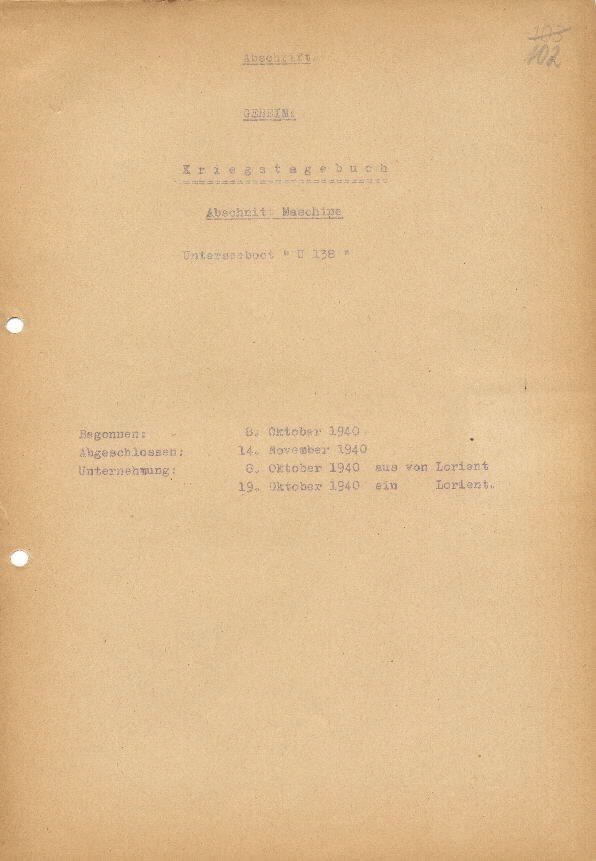 A. Obstructions, Method and Repairs:
1.) Jammed port side rudder 5
2.) Failure in cylinder on the starboard motor.
3.) Leaking in the stem tube bushing and exhaust gas valve.

Additionally 1.) On 9 October Port side rudder 5 jammed during underwater travel. This established as coming from the cable protector coming out from the operational rudder itself. Also, the transfer chain of the rudder wheel was sprung and loosened, and the electrical connecting plug fell out. The plug was secured with a spring.

Additionally 2.) While leading the way on a war cruise on 16 October a cylinder in the starboard engine failed following contamination of the diesel oil pumps. The diesel oil pump block was removed and completely cleaned.

Additionally 3.) On 13 October the boat gradually descended to a depth of T= 45 meters as the result of severe leaking in the exhaust gas valve and the starboard stem tube bushing. In spite of careful maintenance of the main exhaust gas valve in the following days there was no adequate sealing. The stern tube bushing can no longer be placed in a post positive position, and it must be removed before beginning further patrols. Maximum attainable depth = 45 meters.

B. Experiences a) Personnel, b) Mechanical- and diving system:

a) No Special Experiences.
b)
C. Auxiliary and special data (see installation) 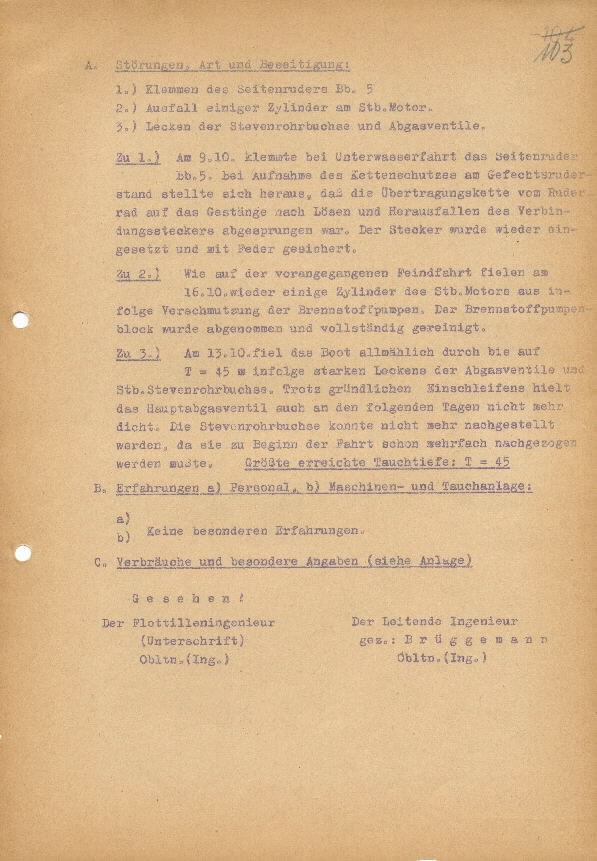 A. Obstructions, Methods and Removal.
1.) Crack in the cooling water jacket of the exhaust gas collecting pipe.
2.) Leak in pressure reducer in the control room.
3.) Clamp in the blow valve of cylinder no.2 port.
4.) Pressure gauge stage II in the compressor unclear.
5.) Overheating in the port thrust bearing.
6.) Packing in cylinder head (starboard)
7.) Break in the securing valve on cylinder 6 starboard.
8.) Fouling of the starboard air filter.
9.) Air whistle valve loose.
10.) Final limit switch in forward periscope not functioning.
11.) Overheating in the starboard thrust bearings.
12.) Crack in the cooling jacket of the exhaust gas collecting casing.

Additionally 1.) On 7 November. Crack in the welded joint of the cooling water jacket for the exhaust gas collecting pipe of the port diesel engine. With help from a rubber clamp and wood filling the flushed water volume can be reduced. No further use is made of the welded joint.

Additionally 2.) On 10 November. Discovered considerable leaking in the pressurized cool water pressure reducer in the control room. It produces a loud sound. It will be disassembled, and a new membrane will be placed next to the leak using a glycerin compound.

Additionally 3.) On 11 November. Discovered the port diesel engine has lost air pressure. The air cooling valve of cylinder 2 is cracked. The motor for the E-machine was annealed and later the valve was replaced.

Additionally 4.) On 11 November. Observed the pressure gauge on the compressor for stage 2 indicated pressure as high as level 5, without rupturing the security valve. The check valve of stage III was ruptured. That check valve was replaced.

Additionally 5.) Due to underwater attack on 17 November both E- motors running G, F. [Slow, Full ?] After 11 min. running time the port thrust bearing became warm. It was cooled with moistened linen. In spite of this the temperature began to climb. Next, air filters were ordered for the port E-motors. The bearing temperature returned to 85°C. After the attack the port E-motor was shutdown. The thrust bearings went through 2 consecutive oil changes. During investigation of the air filter the temperature continued to climb 70°. The motor was shutdown. The thrust bearing was removed to see how bad it was, and it was determined that the corrections were insufficient. The only available socket wrench for dismantling the bushing cracked four more of its six sides. The steel pins could not be used because of their pliability. With help from the short shaft of the heavy end of the socket wrench and pins of chromium vanadium, and using torpedo instruments, the bolts for the bearing box could be disengaged. The eye positions for the new pins were reversed opposite the exchanged ones. As the thrust washer was easily damaged, the port side could only operate at slow drive speed. The bearing temperature can therefore not be allowed to rise higher than 40°C. At the beginning of Sept. the port thrust bearing was prepared once more for removal at German works Kiel. Since then the temperature stands at 10-15°C. higher than the starboard bearings, but remains constant.

Additionally 6.) On 20 November the packing on cylinder 6 starboard blows hard. The cylinder head is removed and the copper seal replaced.

Additionally 7.) On 20 November The relief valve for cylinder 6 starboard handle breaks. After the removal of the air valve a new one is installed. 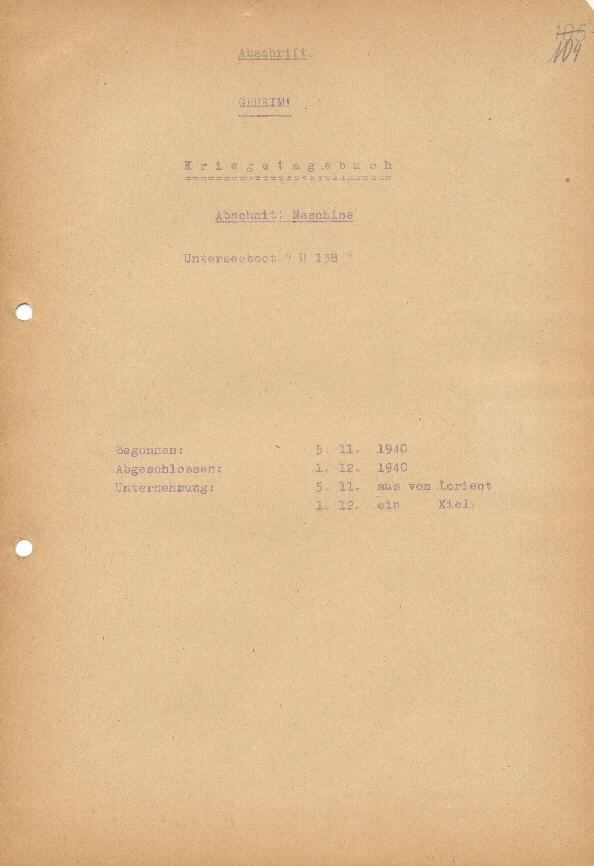 Additionally 8.) On 21 November. A seemingly large loss of oil from the starboard diesel occurred. The air intake filter was contaminated, thereby causing the crankcase to draw in partial amounts of air. This resulted in lower than normal pressure in the crank case when the engine was running, and this hindered the flow of motor oil to the accumulator tank. The air filter was cleansed.

Additionally 10.) On 28 November. The forward periscope was found to be inadequately extendable. Cause: in the limit switch the camshaft was displaced, so that the contact hammer could not make a connection. The cam was rotated further into the correct position.

Additionally 11.) On 1 December. After a (4 hour) “AK.- Cruise” in Kaisers Yard Canal the starboard thrust bearing warmed. It was cooled with sea water and after being repaired in Kiel the oil was changed for the transfer cruise.

B. Experiences a) Personnel, b) Mechanical and Diving systems:
a) During the first operation the technical personnel had proven themselves very good.
In spite of the constant presence of bad weather, steps to repair damage were quickly taken. Special emphasis must be paid to the dismantling of the shaft section between the shaft brakes and the clutch, port side. This was done exclusively by onboard crewmen, without the help of Yard personnel in Bergen.
b) With the installation of the port thrust bearings at sea, it became apparent which
additional problems also existed. When one must work with unsuitable tools it is possible that the stress load increases. It was suggested on the boat, that for each thrust bearing 20 replacement fixtures be delivered, so that it may be possible to fall back on replacements when they are needed. Exhaust gas valves and stem bushings show no leaking from the last patrol.
The consumption of the last of the combustion fuel taken on in Lorient was unduly high, over a long time span the metered values given:
1 Machine L.F. = 40 liters above the normal 25 liters .
Both machine G.F. = 185 liters above the normal 110 liters.

A test run for investigation of the fuel consumption problem was performed. In strong waves at the start of the operation much water came over the tower. The tower drainage was continuously obstructed. It was found that the plug of the stop valve sea cock was colored with spots of rust. It was possible for the greatest cross section of the command to miss this earlier.