Share
Connect
Library
»
Exhibits
»
Anti-slavery Operations of the US Navy

Anti-slavery Operations of the US Navy

Images from Publications in the Navy Department Library

Plate from: Stokes, Robert. Regulated Slave Trade: From the Evidence of Robert Stokes, Esq., Given Before the Select Committee of the House of Lords, in 1849: With a Plate Showing the Stowage of a British Slave Ship, During the Regulated Slave Trade. 2nd ed. London: J. Ridgway, 1851. 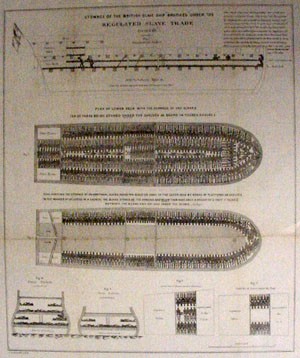 Stowage of the British Slave Ship "Brookes" Under the Regulated Slave Trade Act of 1788.

Note: The "Brookes" after the Regulation Act of 1788, was allowed to carry 454 Slaves, She could stow this number by following the rule adopted in this plate. Namely of allowing a space of 6 ft. by 1 ft. 4 in. to each man; 5 ft. 10 in. by 1 ft. 4 in. to each woman, & 5 ft. by 1 ft. 2 in. to each boy, but so much space as this was seldom allowed even after the Regulation Act. It was proved by the confession of the Slave Merchant that before the above Act the Brookes had at one time carried as many as 609 Slaves. This was done by taking some out of Irons & locking them spoonwise (to use the technical term) that is by stowing one within the distended legs of the other.

Fig. 2: Plan of lower deck with the stowage of 292 slaves, 130 of these being stowed under the shelves as shewn in figure B & Figure 3.

Fig. 3: Plan shewing the stowage of 130 additional slaves round the wings or sides of the lower deck by means of platforms or shelves (in the manner of galleries in a church) the slaves stowed on the shelves and below them have only a height of 2 feet 7 inches between the beams and far less under the beams. See fig. 1.

Fig. 4: Cross section at the poop.

Fig. 6 Lower tier of slaves under the poop.

Fig. 7: Shelf tier of slaves under the poop. 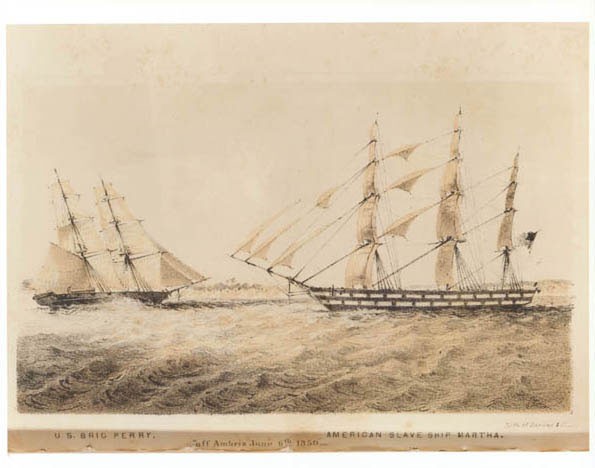 "Lieut. Foote commanded the U.S. brig Perry, 1850-51, on the coast of Africa, with orders to break up the slave trade carried on in vessels flying the American flag . . . The last half of the book is practically a copy of the log of the ship during the cruise to capture slavers. The narrative is clear, concise, and includes many thrilling incidents." -Larned. Foote was "zealous in putting down the slave trade, a goal he made almost a crusade with subsequent public lectures and his book Africa and the American Flag, 1854." - Webster.

Note: Long illegal, the infamous slave trade was declared by Congress in 1819 to be piracy, and as such, punishable by death. The Navy's African Slave Trade Patrol was established to search for and bring to justice the dealers in human misery. Never exceeding a few ships in number, the Patrol, which from time to time included USS Constitution, USS Constellation, USS Saratoga and USS Yorktown, relentlessly plied the waters off West Africa, South America, and the Cuban coast, a principle area for slave disembarkation. By the start of the Civil War more than 100 suspected slavers had been captured.

Britain attempted to stop slavery by legislation in 1807, and enacted stronger measures in 1827, declaring that participation in the slave trade was piracy and punishable by death; slavery was made illegal in the British Empire in 1833.