Translation of these radio documents from U-505 are courtesy of Stephen Paul Revai, a graduate from Language Specialists International, Berlin.

The documents below come from a folder captured on German submarine U-505. The folder contains loosely arranged, typed documents, concerning radio frequencies and radio equipment used by the German Navy (Kriegsmarine). The documents are marked with the letters FT in pencil, which means, Funken-Telegraphie, Wireless Telegraphy, or WT (radio). Many of the documents are on small strips and pieces of paper originally attached to the folder. 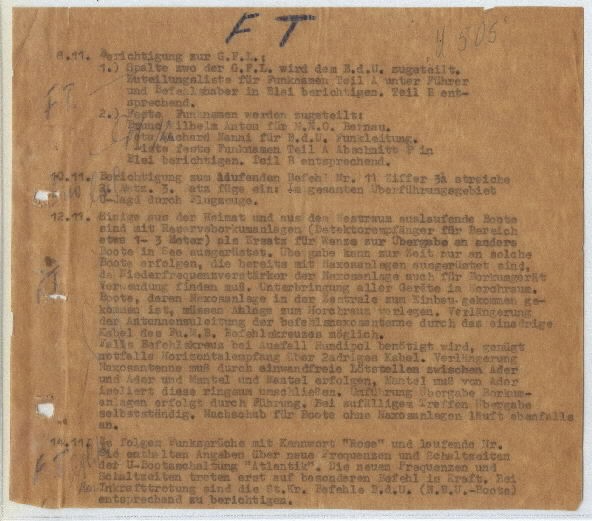 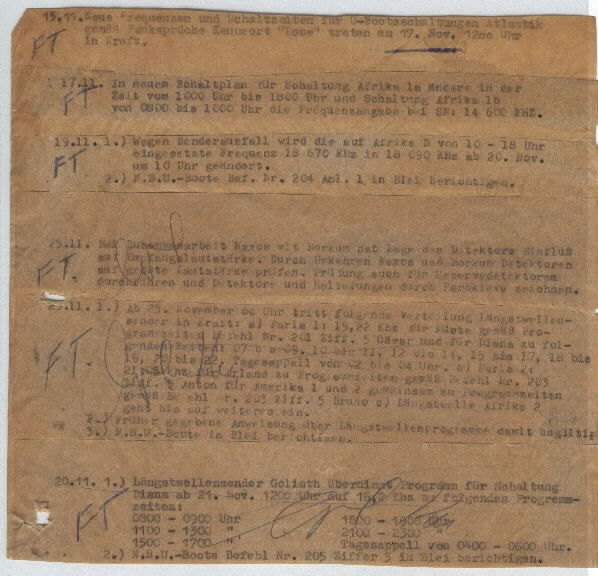 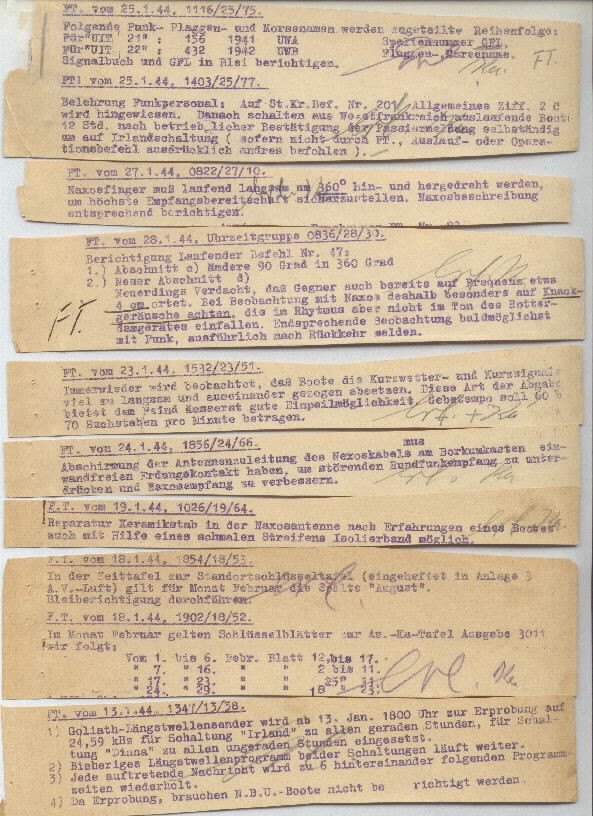 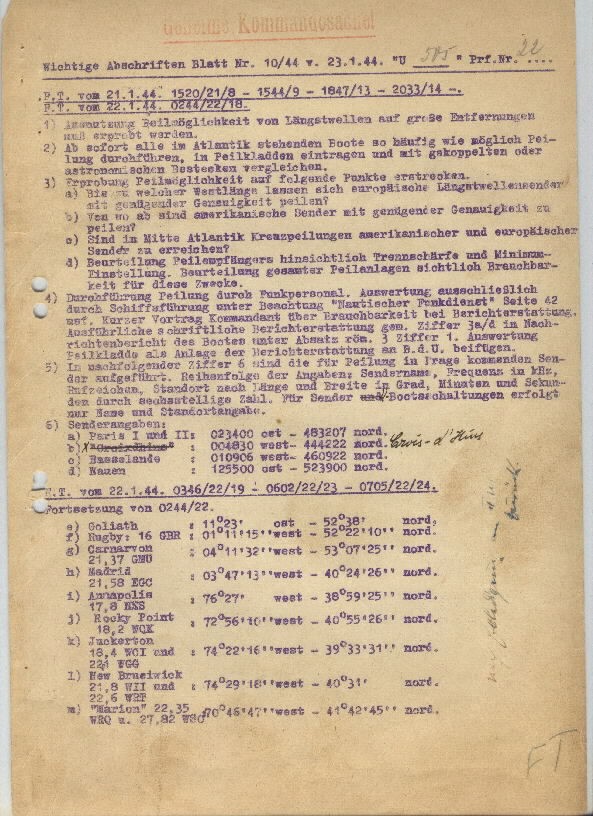 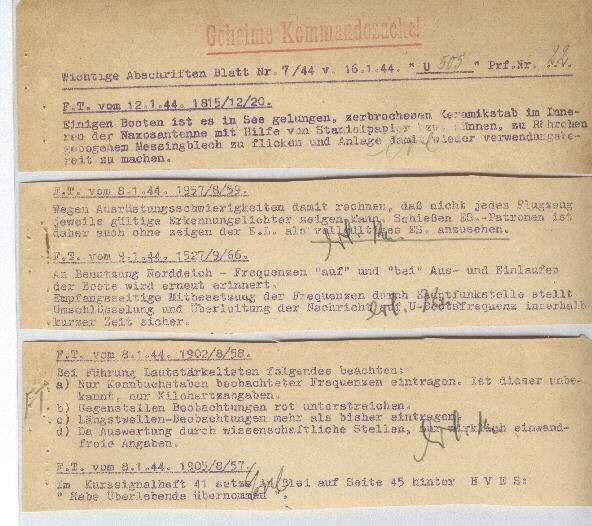 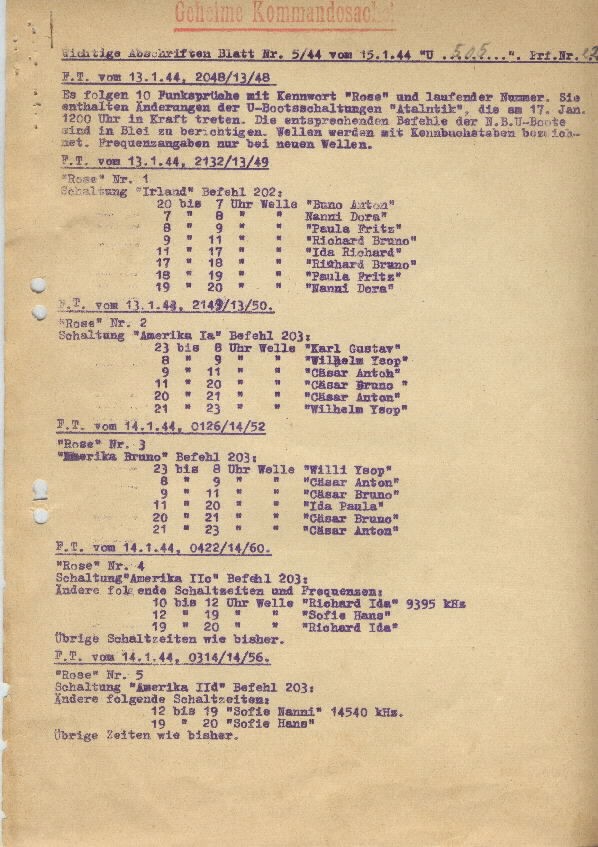 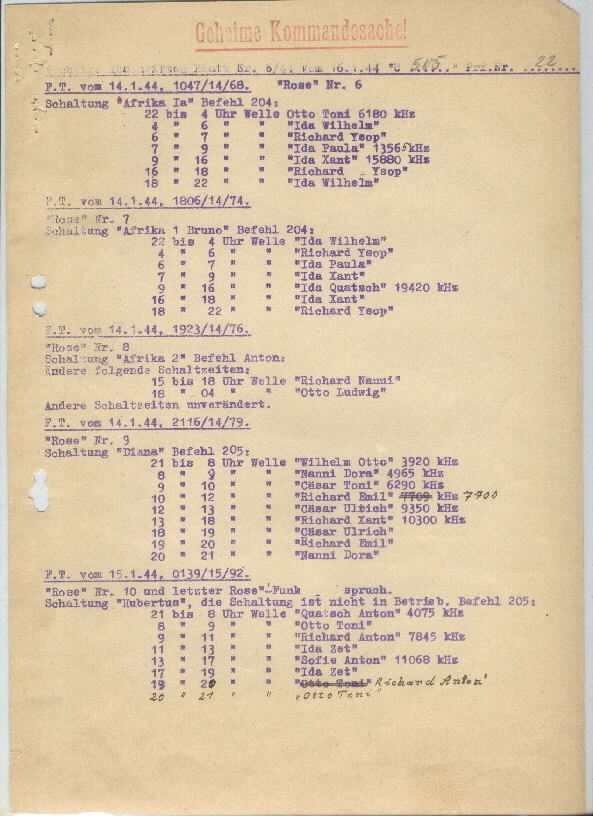 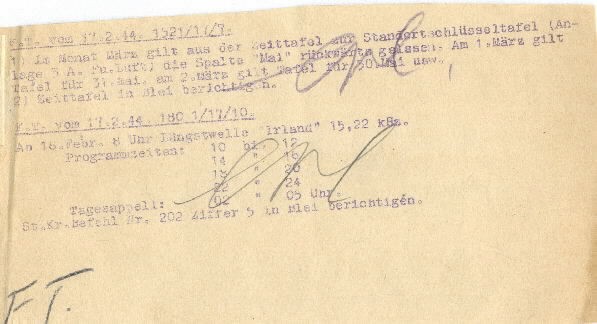 W.T. from 18.2.44. 1832/18/21.
Radio communication for Diana longest wave is at present returning to the initial 3rd successive series program times, then it will jump a program time and a further time again for 3 program times.
Regulations effectively countermanded.

“Cordes” was the only Atlantic boat with the new and efficient Radar Position Locator “Hohentwiel” platform, and received instruction over the range of the apparatus while on war cruise. The special features for air threats during the island and Biscay passages were not installed in the apparatus, and so as not to be betrayed by our emissions, special precautions were taken to improve security with the Naxos antenna and the Aphrodite assembly. Conclusion: For three days aircraft attack. This conduct was sharply disapproved of:
1. With the radar I not only was able to fix aircraft at a minimum 12000 meters, but can also observe bearings and position.
2. The enemy can perhaps verify with position locator emissions, by aircraft, but likely unreliable. As long as the boat can make use of surprise we should be able to remain undetected, it is nevertheless better, that through emissions every air crafts true time can be confirmed, as without radar emissions, we would perhaps be more vulnerable to surprise attack.
3. Only many war cruises can qualify us, then the head start for the enemy in radar location may be eliminated.
4. Navy Order Nr. 252 noted.

W.T. from the 11.2.44. 1138/?/?.
Long wave rotating radiofire “electra sonne Nr. 6” on 9. Febr. 12 hours on account of reorganization which continued after removal from service. Future operational activation is assured.

W.T from the 28.1.44. 1014/28/31.
Shocked Naxos System.
Contact angle detector and high pass must often be maintained against light oxidation.

W.T. from the 3.2.44. 0431/3/48.
From the standing War Order (NLB) Nr. 200 cipher 38 B observe.
Main Radio Position
Supplement to the Flotilla: Cipher 38 B reads: Short signal and short weather not successively placed one behind the other. No “sk”! Several times a short signal is delivered in short space contrary to the desired procedure. 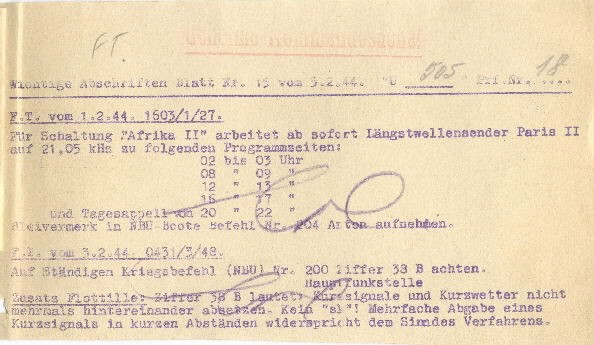