Sebastian Bruns, a student at the University of Bonn, Germany, translated these documents during a summer 2005 internship in the Contemporary History Branch and the Navy Department Library. 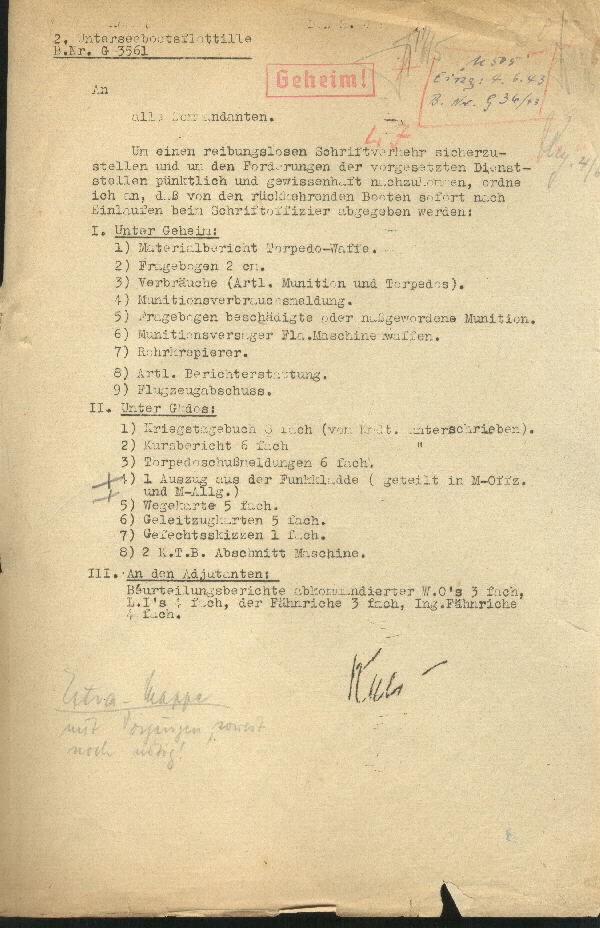 To all [Submarine] Commanders,

In order to guarantee smooth written exchanges and to follow orders of superior officers on time and conscientiously, I hereby order that all boats returning to port immediately surrender the following material to the [responsible officer]:

III. To the officer’s aide: 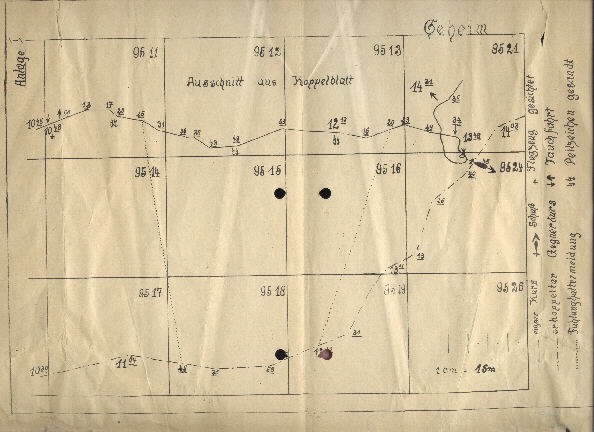 [The chart above depicts the course of movement during an attack by the submarine. The upper line shows the U-boat’s course, starting at 10:45 in the morning to 14.31 (2:31 p.m.). The lower line shows an opponent’s course. Direction reports were given twice and are shown by the spotted lines. The cross (at 10:48) shows that an airplane had been sighted; accordingly, the vessel submerged and returned to the surface a little later (indicated by the arrows). Moving across different quadrants, at approximately 13:48 (1:48 p.m.), a torpedo was fired against the enemy. The continuing line of the enemy vessel’s course indicates that this may have been a miss, forcing the submarine to change course in a clockwise movement towards the north.] 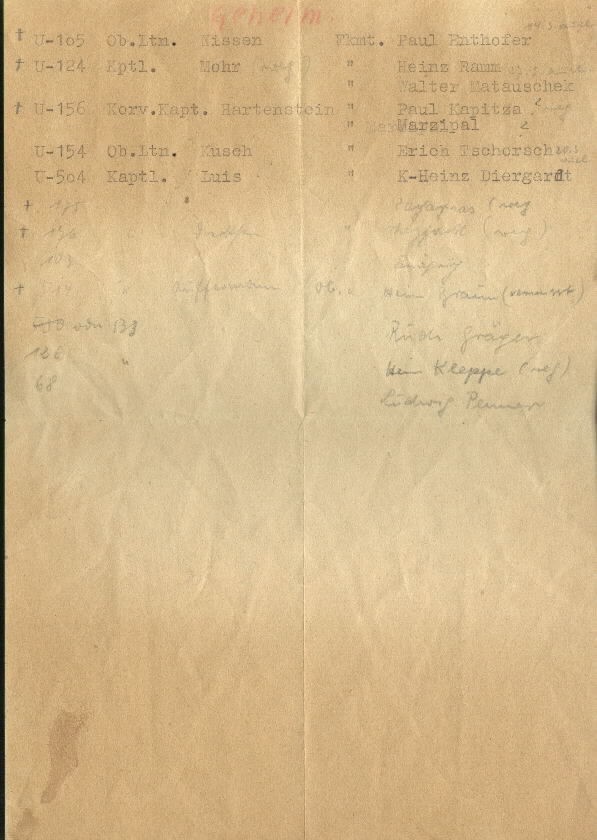 [The document transcribed below is a list of other German submarines and their respective commanders and radio men. Some of the boats have been marked as obviously lost at sea. U-105 through U-504 are typed, the rest and what is written in brackets is handwriting (pencil)] 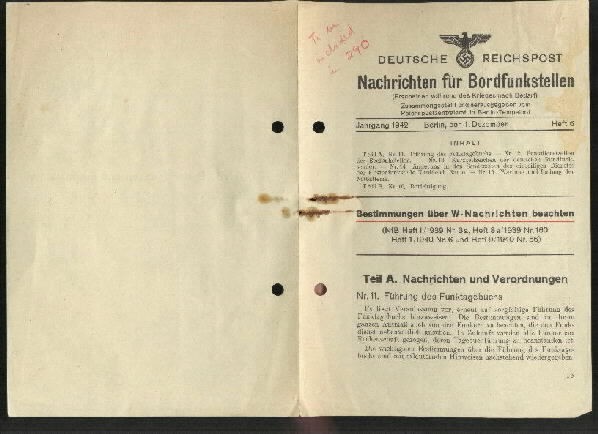 Edited and published by the Central Reichspost Agency, Berlin-Tempelhof

Part A. News and Orders

No. 11. Usage of radio journal

The most important rules of procedure, supplemented by explanatory text, are noted in the following: 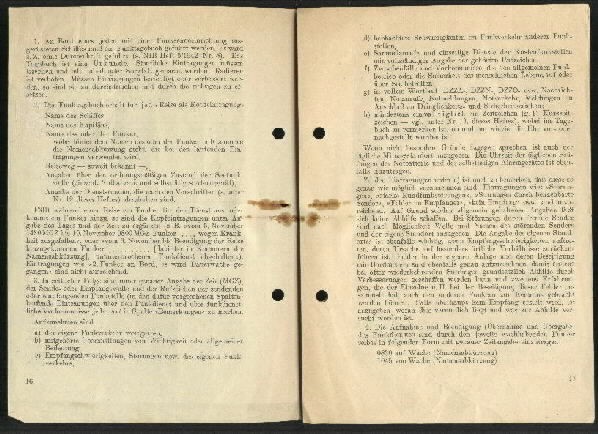 1. On board any vessel carrying a radio, a radio journal has to be used. It is currently written without a copy (cf. No. 5/1942 8). The radio journal is an official document. All entries must be written legibly and with strict care. Erasing is forbidden. If entries have to be corrected, they are to be crossed out and replaced by the correct entry.

2. The title paragraph of the radio journal must include for every campaign:

a. Name of the vessel,
b. Name of the Captain,
c. Name of the radioman or men (which will in brackets include the initials to be used for the journal entries),
d. Course of vessel – if known,
e. Remarks about the correct condition of the radio (including emergency battery and automatic emergency radio),
f. Remarks on the working hours that have to comply with the orders (see No. 12 in this issue).

If a radioman has to quit service during the campaign, or if a new radioman is starting service, this must be included in the title paragraph, with day and time (for example, “from 5 November 1430 MGZ [?] to 10 November 0800 MGZ radioman … out of work due to illness,” or “from 6 November until end of journey, additional radioman … (with initials in brackets), uninterrupted radio service”).
Entries such as “Second radioman on board, uninterrupted watch is being held” are not sufficient.

3. Using the exact time (MGZ), transmitting wavelengths and the calling signatures of the sending or receiving broadcast station, the radio journal has to include:

d. overheard problems in radio conversations between other broadcasting stations,
e. collective calls and one-line orders of coastal broadcasting stations, including the transmitted signatures,
f. incidents concerning the general broadcasting or the security of human life on or [in aircraft] above the sea,
g. in full coverage: DZZA-, DZZN-, DZZO- [illegible abbrivations] et al. broadcasts, emergency calls, emergency conversations, broadcasts in the aftermath of emergency or security callings,
h. at least once a day a time signal, and it must be included in the journal if and when the clock was set forward or backward.

Special reasons not withstanding, the position at noon shall be transmitted. The time of day of the daily check on the emergency battery and the automatic emergency radio must also be included.

It must be noted regarding (c) that they have to be as precise as possible. Entries such as “problems”, “strong disturbance”, “disturbance by foreign broadcasting”, “error in receiver”, “no reception” et al. are insufficient. Based on those general entries, no help can be supplied. Disruption by foreign broadcasts shall include the other station’s name, wavelength, and their position where possible. Including the own position is also important when experiencing difficulties caused by local factors. Errors in the radio and their elimination with the help of on-board tools must also be documented in order to avoid returning errors and also to be able to spread the word of how to repair the specific problem to other radiomen. In case that no reception is received, it shall be presumed what the cause may be and what could be done about it.

4. Beginning and ending of radio duty must be entered into the journal by the radioman on duty in the following form, including exact time: 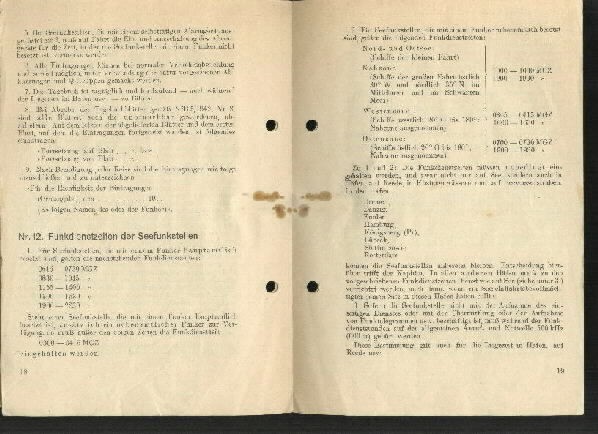 5. Broadcasting stations using an automatic emergency radio must include the times when this appliance was switched on and off for the time when no radio man was on duty.

6. All entries shall be made under regular conditions and, if possible, using the designated abbreviations.

7. The journal must be used daily and coherently, even during times in port.

8. Upon turning in the pages of the journal according to No. 5/1942 8, all pages have to be submitted, including the ones the became useless. On the last of the pages turned in, and on the first where entries continued, the following is to be included:

9. At the end of each campaign, the entries have to be concluded in the following fashion:

“For the right correctness of the entries: (indication of place), day and month, year (followed by the names of the radioman or men)”

1. For radio broadcasting stations with a radio man on watch all the time, the following radio times are valid:

2. For radio broadcasting stations with a part-time radioman, the following times are valid:

To 1 and 2: The radio service times must be observed at any time; not only at sea, but also in ports, at anchor, in coastal waters and sea straits. In the ports of

the broadcasting stations may remain unmanned. The decision on this matter is to be made by the Captain. In all other ports, service as if on sea (see 3) must be on duty in any case.

3. If the broadcasting station is not busy receiving one-way communication or transmitting telegrams et al., during the operational hours, the general wave length of 500 kHz (600 m) must be received. 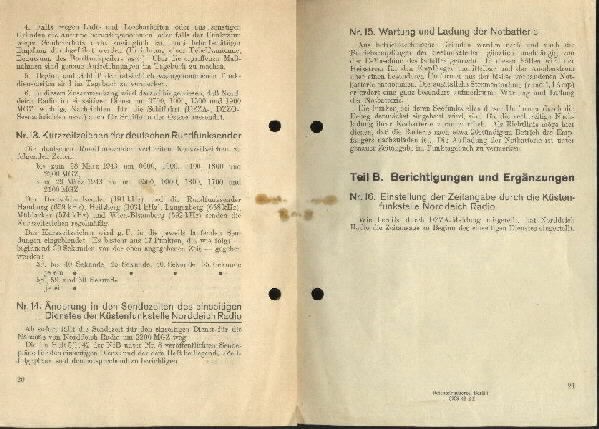 4. If the antenna has to be taken down due to loading or unloading, or if the radio room is not accessible due to prohibition of radio transmitting, a temporary reception must be set up. Whichever method is chosen, it must be noted in the journal.

5. Start and end of the actual transmitting sequences must be noted in the journal.

6. Related to this matter, it shall be noted that Norddeich Radio broadcasts important messages in one-way transmission at 0700, 1000, 1500, and 1900 MGZ for sea-going vessels (DZZA-, DZZO-, sea news et al) even for vessels in the Baltic.

The short message signature may be included in the broadcasts already in progress. It is made up of 17 signals that will be given 30 seconds prior to the time given above:

No. 14. Change in times of broadcast by radio station

The Short Zone [cf. p. 5] broadcast for one-way transmissions by Norddeich Radio at 2200 MGZ is ceased immediately.
The schedules included in No. 5/1942 under Chapter Eight are to be corrected.

No. 15. Maintenance and charge of emergency battery.

Due to technical reasons, the receiver of the on-board radio transmitting station will be made independent from the vessel’s electric power turbine. In these cases, the heating power for the receiver and the anode’s power will be drawn from the emergency battery already in place. The additional use of power (ca. 1.4 Amp) makes a very thorough care and charge of the battery a necessity.

The radiomen, whose radio rooms will receive these measures in the near future, are responsible for the recharging of the emergency battery. The guiding principle shall be the need to recharge the battery after 20 hours of use. Recharging the emergency battery must be noted in the radio journal, using the exact time.

No. 16. Suspension of broadcasting of the exact time by the

As noted in the DZZA report, Norddeich Radio suspended this service. 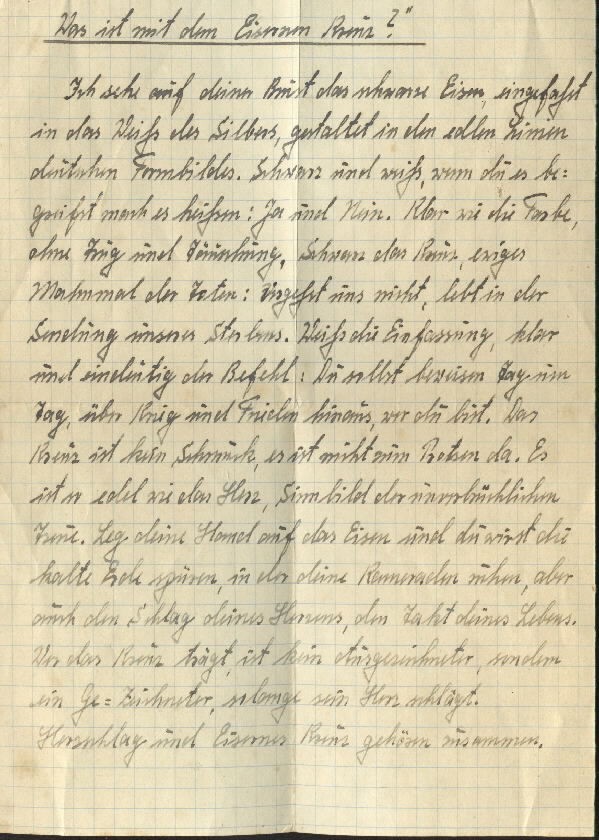 [The following is a letter that reflects the meaning of the Iron Cross. On the backside, it bears a postal address from Seebad Ahlbeck, a coastal resort town on the German Baltic Coast.]

I see on your chest the black steel, framed by the whitish silver, fashioned in the finest lines of the German formal philosophy. Black and white, if you realize this, should mean: Yes and No. Clear as the color, without deceit and [illegible]; Black is the Cross, eternal memorial for the dead: Do not forget us, live in the [illegible] of our death. White is the framing, clear and unequivocal the order: You shall put forward proof day after day, beyond war and peace, who you are. The Cross is not jewelry; it is not to show off. It is as noble as the heart, image of the unbreakable loyalty. Put your hand on the steel and you will feel the cold earth that your comrades forever rest in, but also feel the beat of your heart, the rhythm of your life. He who bears the Iron Cross is not decorated, but bears a strong burden [the German says … kein Ausgezeichneter, sondern ein Ge=zeichneter, which is a play of words] as long as his heart is beating. Heartbeat and Iron Cross belong together.