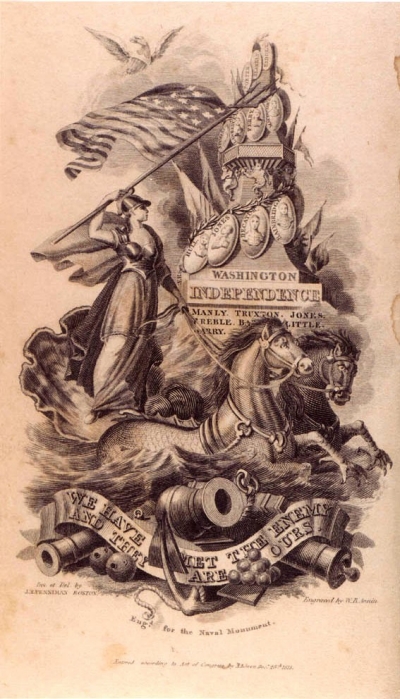 Plate showing the Naval Monument - "We Have Met the Enemy and They Are Ours," drawn by J.R. Penniman (frontispiece). Navy Department Library rare Book Collection.

The Naval Monument, Containing Official and Other Accounts of All Battles Fought between the Navies of the United States and Great Britain during the Late War; and an Account of the War with Algiers, with Twenty-five Engravings. To Which Is Annexed a Naval Register of the United States. Boston: A. Bowen, and sold by Cummings and Hilliard, 1816. [18], 316 [error for 320], [2], errata slip, 26 plates, 22 cm.

The plates illustrating this work, are primarily woodblocks engraved by Abel Bowen after original drawings by M. Corne. Constituting an early iconography of American naval warfare, they include "Constitution's Escape from the British Squadron after a chase of sixty hours," "The Constitution Bearing Down for the Guerriere," "The Constitution in Close Action with the Guerriere," "The Wasp Boarding the Frolic," "The United States and Macedonian," "The Java Surrendering to the Constitution," "The Hornet Blockading the Bonne Citoyenne," "The Hornet Sinking the Peacock," "The Chesapeake & Shannon," "The Enterprize and Boxer," "First View of Com. Perry's Victory," "Plan of the First View of the Battle on Lake Erie," "Second View of Com. Perry's Victory," "Plan of the Second View of the Battle on Lake Erie," "Capture of the Essex," "The Peacock and the Epervier," "The Wasp and the Reindeer," "The Wasp and Avon," "Com. Macdonough's Victory on Lake Champlain Sept. 11th. 1814," "The President Engaging the Endymion, While Pursued by the British Squadron," "The Constitution Taking the Cyane and Levant," "The Hornet and Penguin," and "The Hornet's Escape from a British Seventy-Four." This is the first printing. It was followed by issues 1830, 1836, 1837, 1838, and 1840. The 1836 printing was revised and includes additional material. 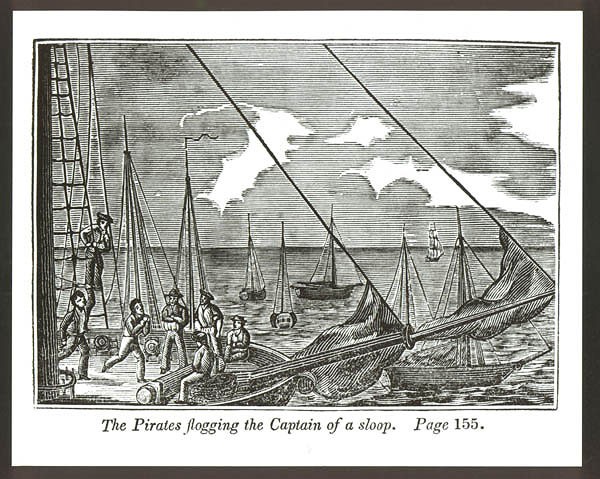 The Lives and Bloody Exploits of the Most Noted Pirates, Their Trials and Executions, Including Correct Accounts of the Late Piracies, Committed in the West Indias, and the Expedition of Commodore Porter; Also Those Committed on the Brig Mexican, Who Were Executed at Boston, in 1835. Embellished with Numerous Plates from Original Designs. Hartford, Conn.: E. Strong, 1836. [2], [5]-298 p., illus., plates, 19 cm.

Pages 253-83 are "A Correct Account of the Late Piracies Committed in the West Indies; and the Expedition of Commodore Porter." The foregoing appears on the front of the initiating half title. The back of the half title notes: "The public mind has been much agitated by the depredations of these enemies of all laws, human and divine. . . . Our government has taken a forward step to arrest these free-booters in their blood-thirsty projects, and no doubt the expedition which was under the command of that gallant officer, Commodore Porter, has done much towards putting down this nefarious practice in the West-India seas." The entire work carries many handsome engravings. Earlier editions (1825, 1827, 1829, and 1834) have appeared under the title The History of the Pirates.