Japanese propaganda leaflet recovered during the Battle of Okinawa 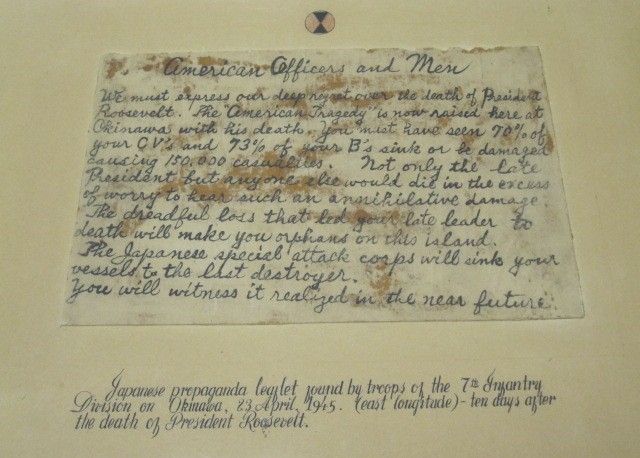 One 7x5 inch framed Japanese propaganda leaflet found by troops of the Seventh Infantry Division during the Battle of Okinawa, 23 April 1945. The paper is stained and discolored. Text in handwritten black ink reads:

We must express our deep regret over the death of President Roosevelt. The "American Tragedy" is now raised here at Okinawa with his death. You must have seen 70% of your CV's and 73% of your B's sink or be damaged causing 150,000 casualties. Not only the late President but anyone else would die in the excess of worry to hear such an annihilative damage. The dreadful loss that led your late leader to death will make you orphans on this island. The Japanese special attack corps will sink your vessels to the last destroyer. You will witness it realized in the near future.

Below the leaflet, on the mat board is written in cursive "Japanese propaganda leaflet found by troops of the 7th Infantry Division on Okinawa, 23 April 1945. (east longitude)-ten days after the death of President Roosevelt.” Above the leaflet is a hand drawn insignia of Seventh Infantry Division, US Army.

The leaflet references the death of President Franklin Roosevelt on 12 April 1945. The reverse of the leaflet has a letter attached to addressed to Admiral Nimitz from the Seventh Infantry Division Headquarters, dated 10 May 1945. “Admiral Nimitz / thought you might be interested in the fate of your fleet. / Best wishes from the Seventh…”