Souvenir Cards from COMSUBRON 20 for the Japanese Surrender Ceremony, 2 September 1945 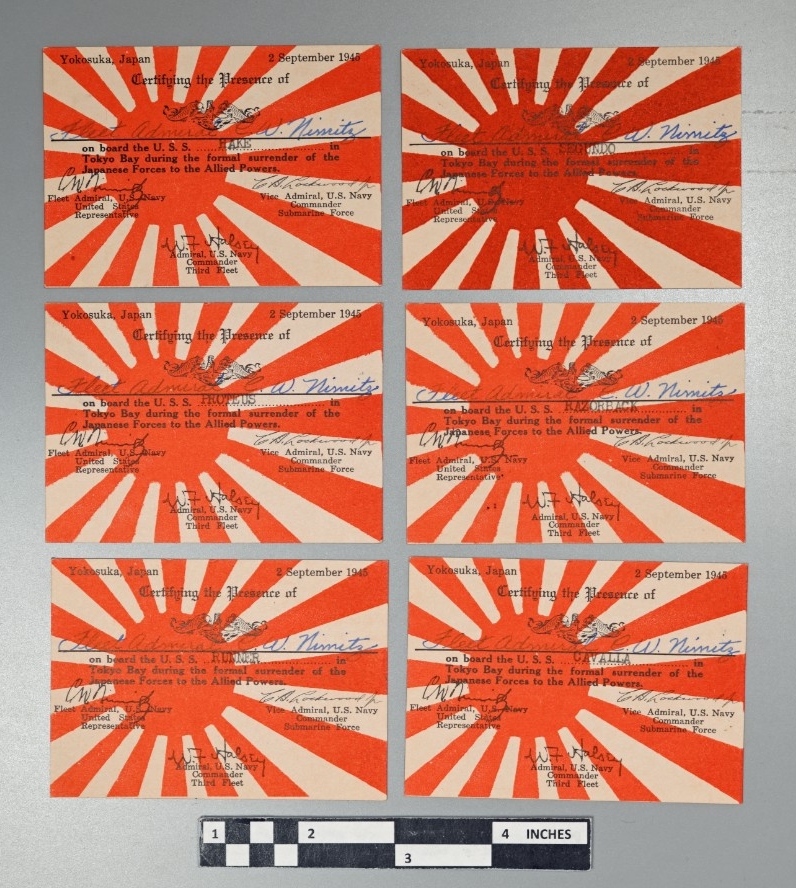 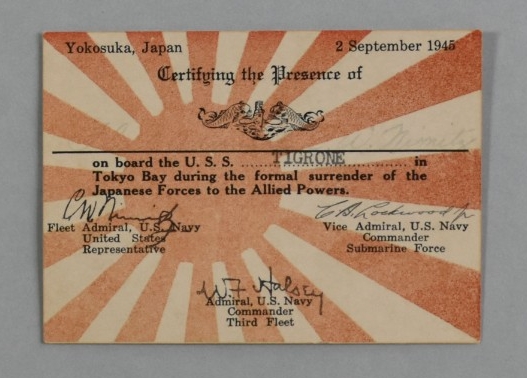 A group of seven small, 2.55” x 3.54” rectangular cards of white cardstock. The background of the obverse has a representation of the Imperial Japanese Navy ensign printed in red consisting of a disc offset to the left with rays radiating out from the disc. Overprinted in black ink in the upper half of the obverse is the following: Yokosuka, Japan / 2 September 1945 / Certifying the Presence of / (US submarine qualification badge) / _________ / on board the U.S.S. ………… in / Tokyo Bay during the formal surrender of the / Japanese Forces to the Allied Powers. Overprinted in black in the lower half of the obverse are three facsimile signatures with titles as follows: C.W. Nimitz / Fleet Admiral, U.S. Navy / United States / Representative // C.A. Lockwood Jr. / Vice Admiral, U.S. Navy / Commander / Submarine Force // W.F Halsey / Admiral, U.S. Navy / Commander / Third Fleet. Hand-written signatures in very faded ink are visible above the solid black line with “C.A.Lockwood” to the left and “C.W.Nimitz” to the right. Each card is marked in typewritten black ink on the dashed line with the name of a different vessel in capital letters. Identical cards are marked in a similar manner for USS Proteus (AS-19), USS Cavalla (SS-244), USS Hake (SS-256), USS Razorback (SS-394), USS Segundo (SS-398), USS Tigrone (SS-419) and USS Runner (SS-476). 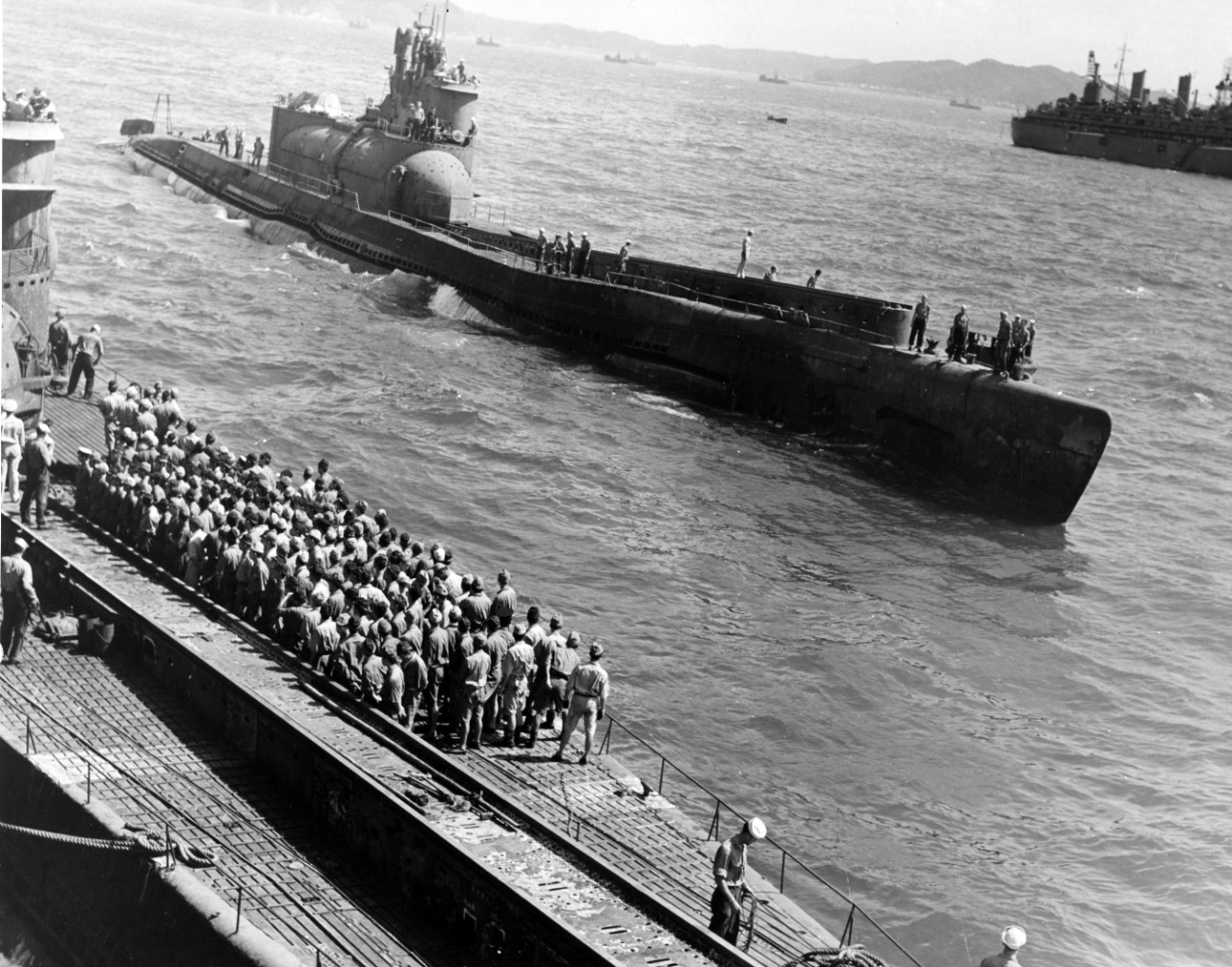 On 15 August 1945, the date when Japan accepted allied surrender terms, Vice Admiral Charles A. Lockwood, Jr., Commander Submarine Force, Pacific Fleet, ordered USS Proteus (AS-19), a Fulton-class submarine tender, and Commander Submarine Squadron (COMSUBRON) 20 to proceed to Japan. Proteus departed Guam the next morning with all available submarine force personnel aboard to form prize crews in order to seize surrendered Japanese submarines. After rendezvousing with the Third Fleet southeast of Japan, Proteus dispatched two prize crews on 27 August to take possession of the Japanese submarines I-400 and I-14, which both surrendered at sea. Proteus arrived off Honshu on 28 August and proceeded to her assigned anchorage in Sagami-wan (Sagami Bay). The ship, joined by the surrendered Japanese subs, anchored in Tokyo Bay on 30 August. Personnel were immediately dispatched from Proteus to Yokosuka submarine base to begin demilitarizing Japanese forces, gathering intelligence information and preparing to establish a new US submarine base. 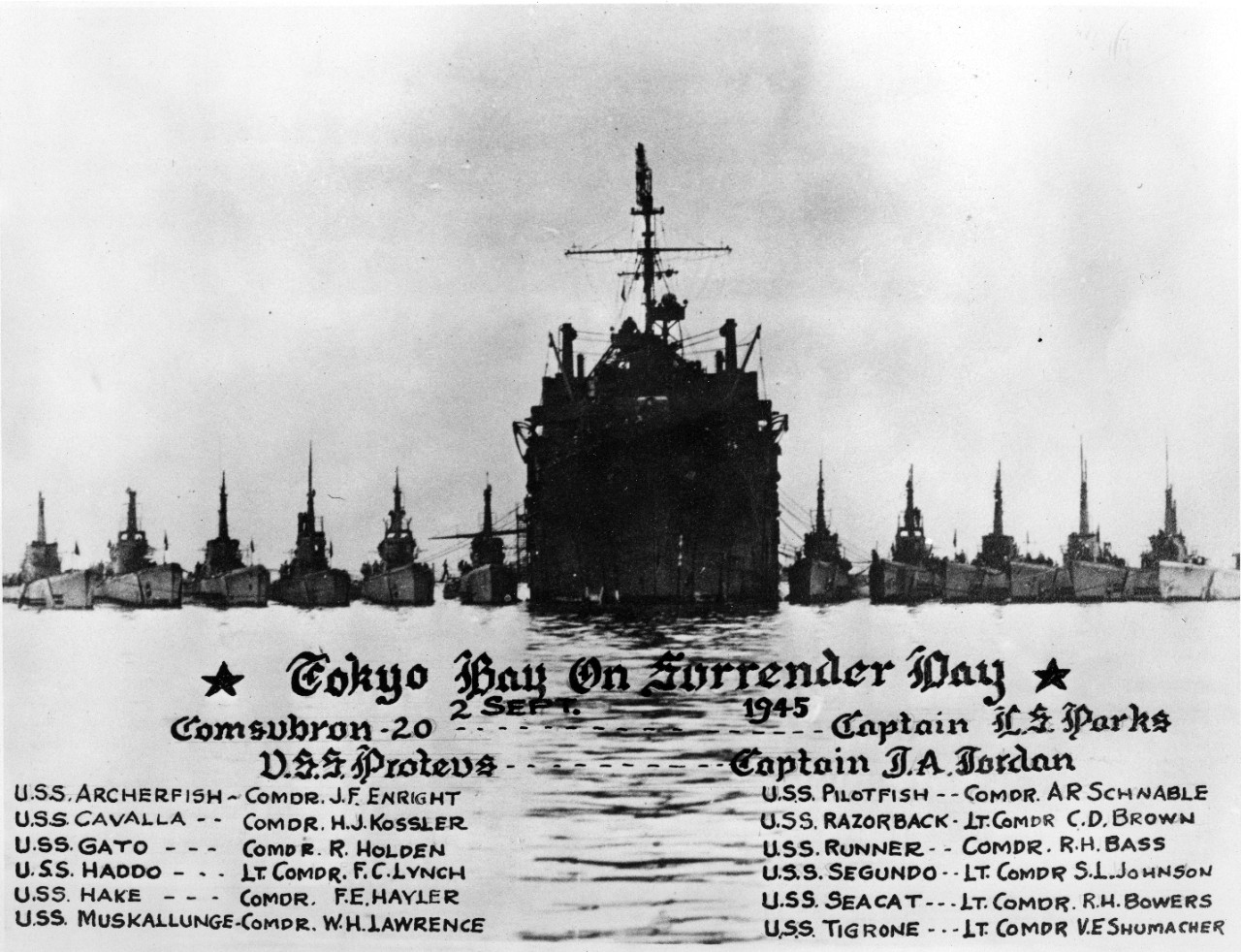 Description: With submarines of Submarine Squadron 20 alongside in Tokyo Bay, on VJ-Day, 2 September 1945. Names of the submarines present, their commanding officers and the commanding officers of SubRon20 and USS Proteus are printed at the bottom of the image. Courtesy of Captain Joseph F. Enright, USN(Retired), 1979. U.S. Naval History and Heritage Command Photograph.

Vice Admiral Lockwood took quarters aboard Proteus upon her anchoring and remained aboard until 3 September. After shifting her anchorage to Yokosuka Naval Base on 31 August, Proteus was joined by twelve US submarines and a third captured Japanese sub, the I-401. The American submarines were moored alongside the Proteus in Yokosuka Lagoon for the official Japanese surrender ceremony aboard USS Missouri (BB-63) on 2 September 1945. After the ceremony, Fleet Admiral Chester W. Nimitz came aboard to inspect the captured Japanese subs and visit the American submariners. The following day, 3 September, all twelve of the American submarines departed Yokosuka and sailed toward home. All three Japanese subs, along with several others, were later sailed by American crews back to Pearl Harbor for study before being sunk as targets. 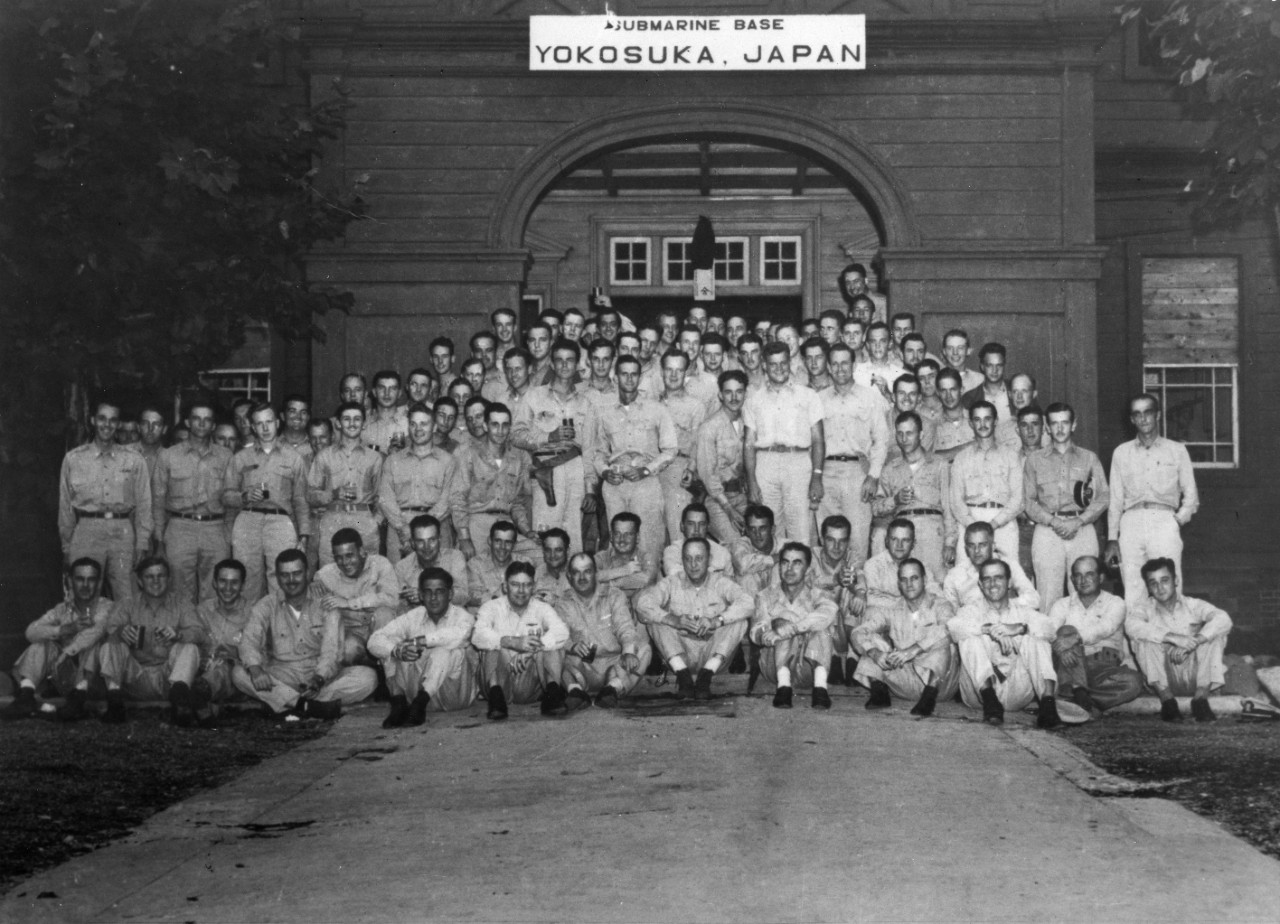