Safe Conduct Pass for Vietnamese Defectors from the Vietnam War

One safe conduct pass from the Vietnam War. The obverse of the paper pass has a large South Vietnam flag in the center and is flanked by smaller flags of the United States of America, Australia, Thailand, South Korea, New Zealand, and the Philippines. The reverse has an official stamp, is signed, and contains Vietnamese text explaining the assistance they will receive if they surrender. Both sides contain English text reading "Safe-conduct pass to be honored by all Vietnamese government agencis and allied forces." The obverse contains a similar phrase in both Thai and Korean.

Safe conduct passes allow enemy aliens safe passage through an occupying force’s territory. The three languages on the obverse are to ensure that whichever Allied force recovers the defector, they will know that that individual is not to be harmed. These passes, issued by American forces, were airdropped in Vietnam to encourage defection of North Vietnamese and Viet Cong forces. The seven flag version was first produced in 1967. 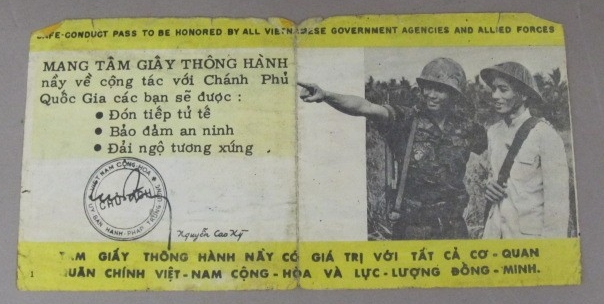