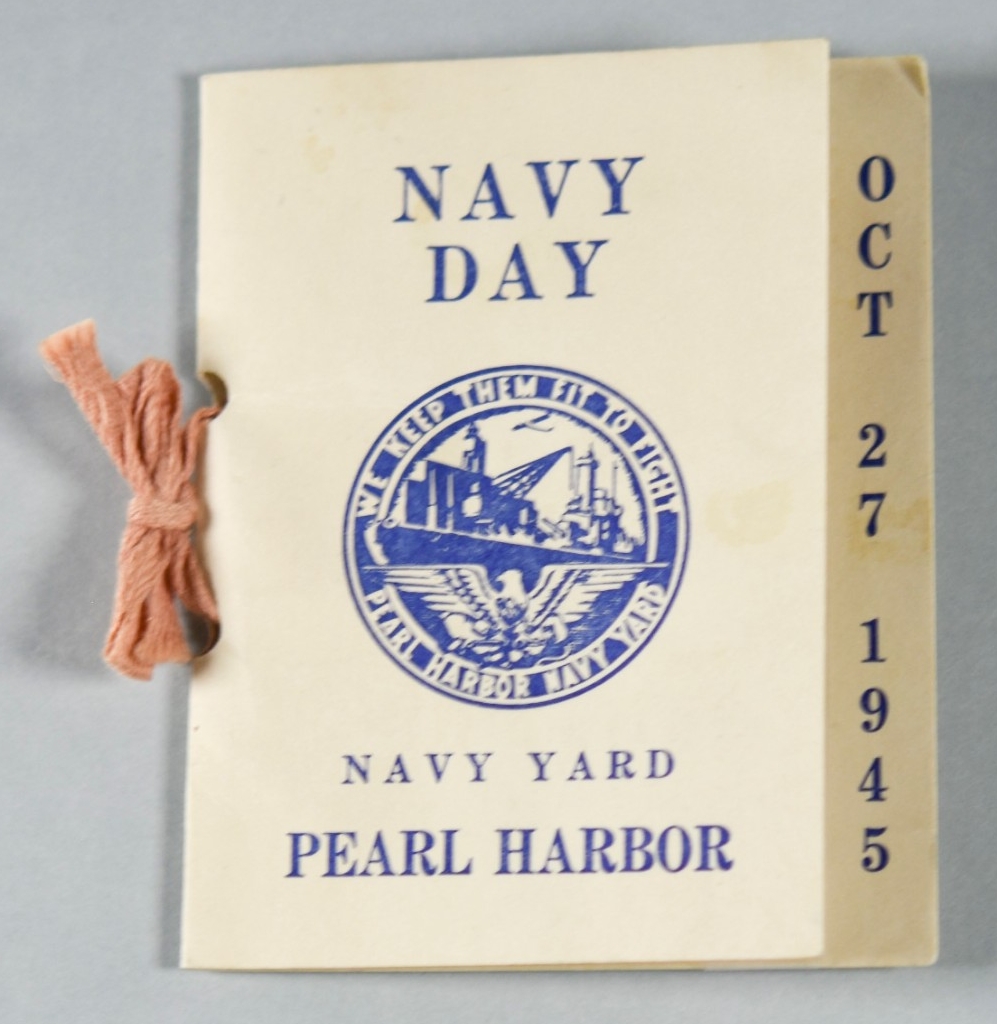 A 3.5” x 4” rectangle of white cardstock folded over to form a small souvenir card. The card has blue printing on the obverse and both sides of the interior. There are two holes punched in the spine with a short length of light brown woven tape tied through the holes. Inside the card is a small square of brown teakwood with a hole drilled through it for the tape to pass through. The obverse reads: NAVY / DAY / NAVY YARD / PEARL HARBOR. A circular logo at the center of the obverse has lettering around the rim which reads: WE KEEP THEM FIT TO FIGHT / PEARL HARBOR NAVY YARD. The interior, left reads: SHOPS / 63-68 / JOINERS / MILLMEN / SHIPWRIGHTS / BOAT BUILDERS. The interior, right reads: A SOUVENIR of the / Signing of the Surrender / Aboard The / USS MISSOURI / In Tokyo Bay / September 2, 1945 / This piece of teak was taken / from the quarter deck upon / which the representatives of The / UNITED NATIONS met on that / memorable Day. Along the right edge of the right interior, running vertically, and visible when the card is closed, is the lettering: OCT 27 1945. 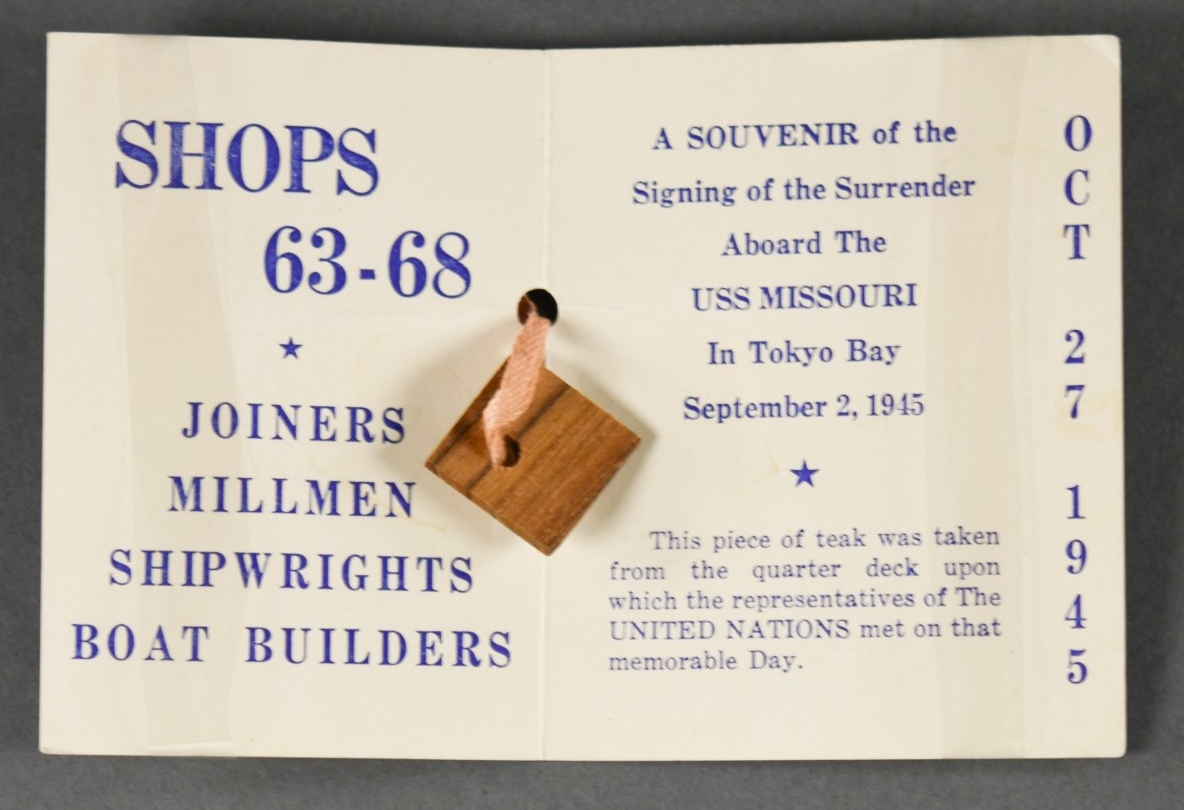 USS Missouri (BB-63), an Iowa-class battleship commissioned on 11 June 1944, participated in the battles of Iwo Jima and Okinawa, as well as the bombardment of the Japanese home islands. Missouri entered Tokyo Bay on 29 August 1945 and hosted the official Japanese surrender ceremony ending World War II on 2 September. The ship departed Japan on 6 September, stopped at Guam to pick up returning service members as part of Operation Magic Carpet and returned to Pearl Harbor on 20 September. Departing Pearl Harbor on 29 September, Missouri arrived off New York City on 23 October and welcomed aboard President Harry S. Truman with a 21-gun salute on 27 October 1945, to commemorate the first Navy Day since the end of World War II. 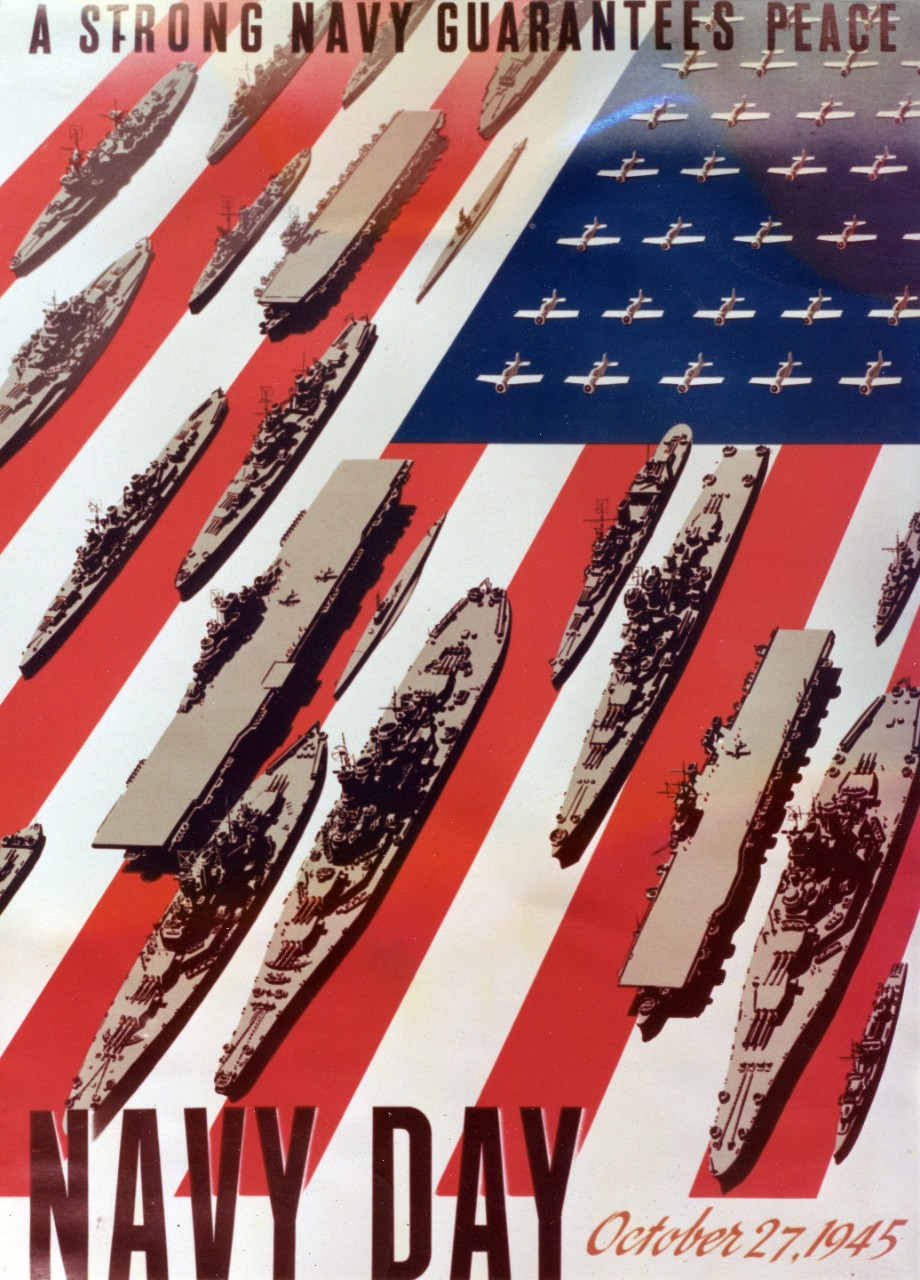 Navy Day was established by the Navy League of the United States in 1922 on 27 October, the birthday of former Assistant Secretary of the Navy and 26th President of the United States, Theodore Roosevelt, Jr. Sometime during the Missouri’s stopover in Hawaii, teakwood was removed from her quarterdeck by the civilian workers at the Pearl Harbor Navy Yard to provide souvenirs such as the example shown to commemorate Navy Day and the end of the war.