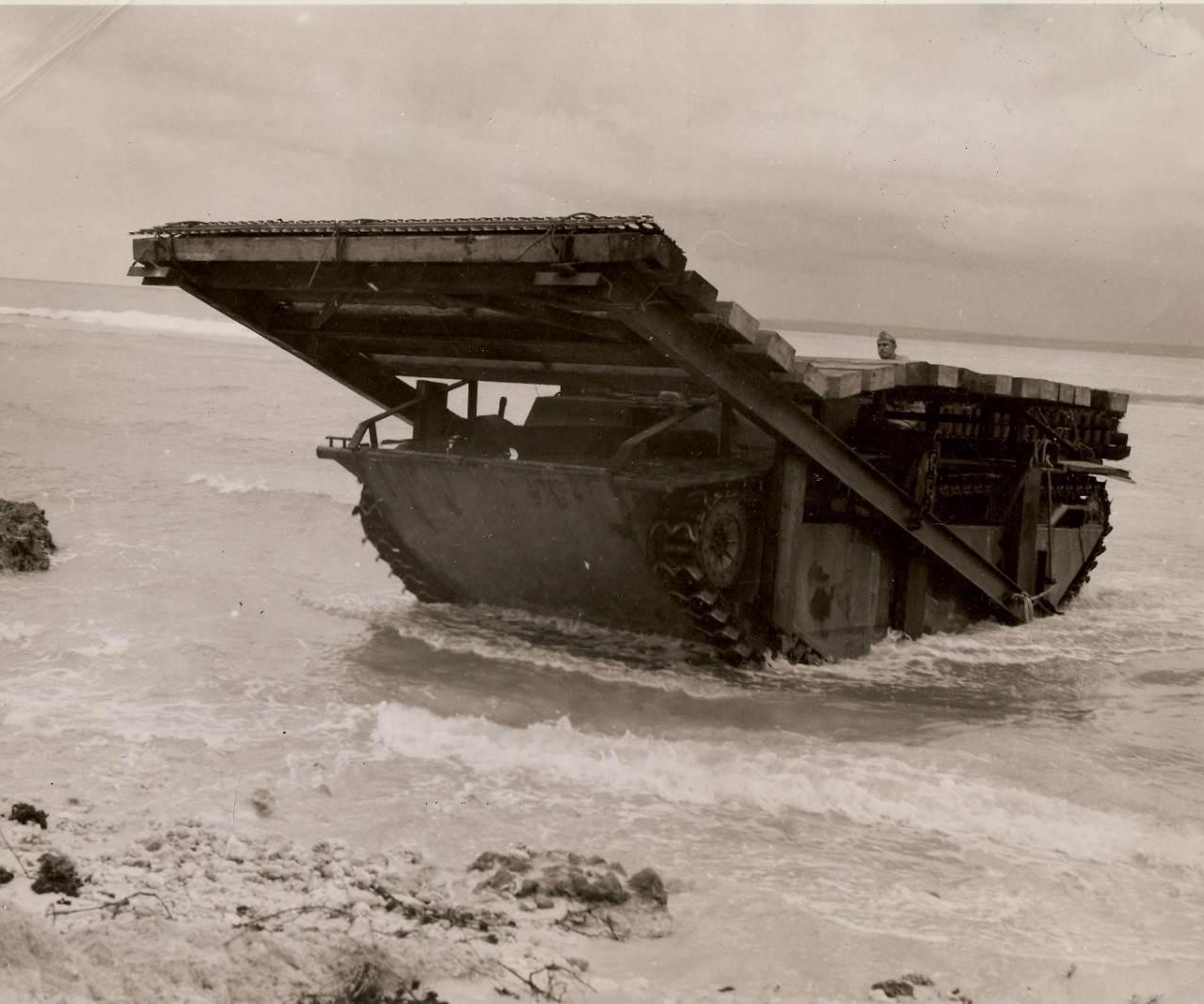 Demonstration of portable ramp for LVT-2 approaching the bluff and beach at Saipan, 12 July 1944.

In preparation for the landing at Tinian, the issue of how to attack from the northern shore became an issue. There were two small, narrow strips of beach on the northern end that were almost certainly guarded by the Japanese forces. The rest of the shoreline was marked by jagged coral cliffs up to 15 feet high, forming a perfect barrier to landing heavy equipment, motorized armament and tanks. 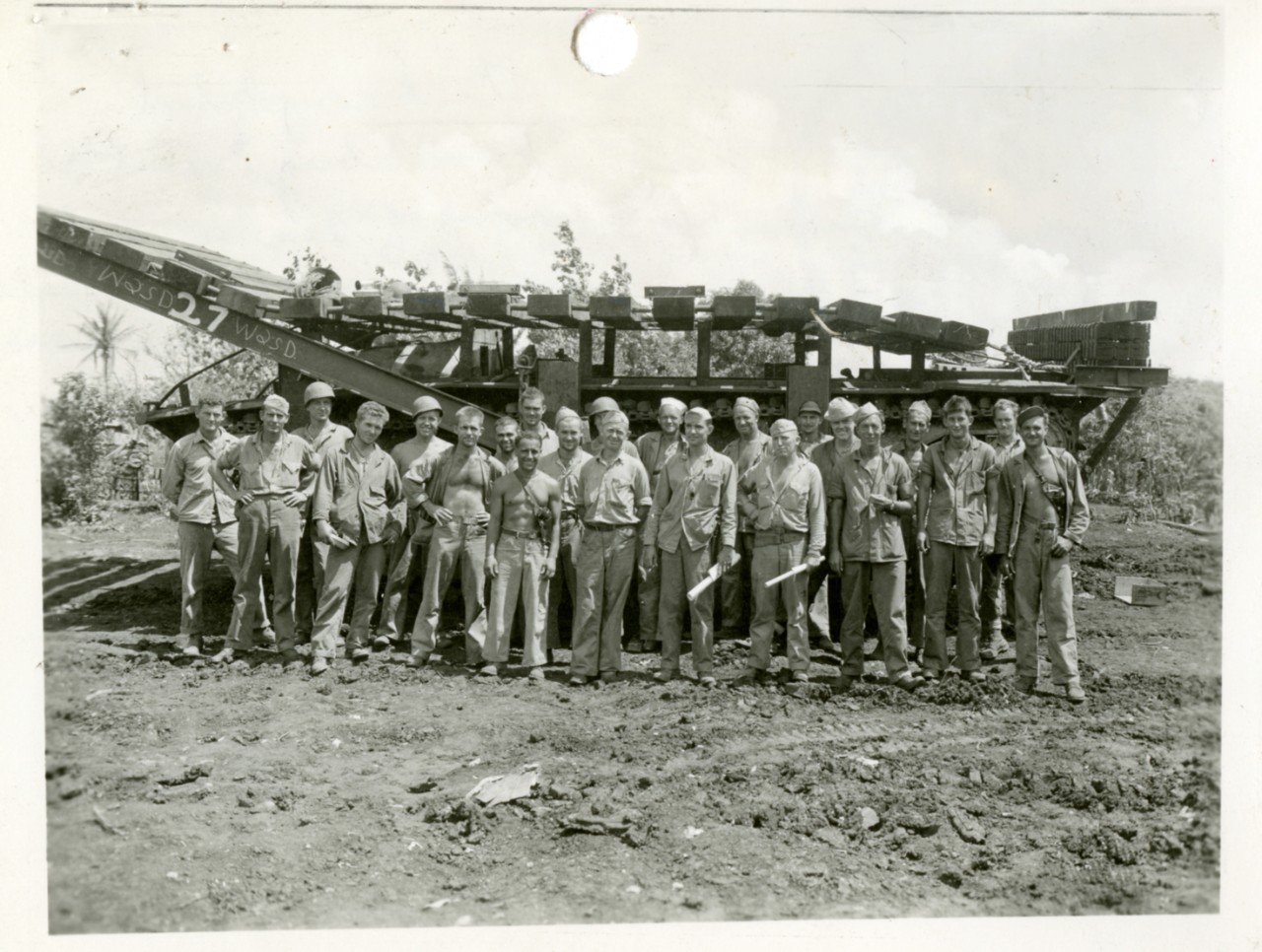 First completed Doodlebug with some of the Seabee and Marine personnel who built her. The 18th and 121st Naval Construction Battalions were attached to the 2nd and 4th Marine Divisions respectively at the time.

Commodore Paul J. Halloran, CEC, USN, commander of all Seabee units assigned in the area, was confronted with the problem of overcoming the cliff obstacle. He drew rough sketches of what he had in mind and described it to mechanics with two Seabee battalions on Saipan who created the Doodlebug. The Seabee used materials found at an abandoned Japanese sugar mill and an LVT (landing vehicle, tracked) to supply the flotation and mobility to put the ramp in place. 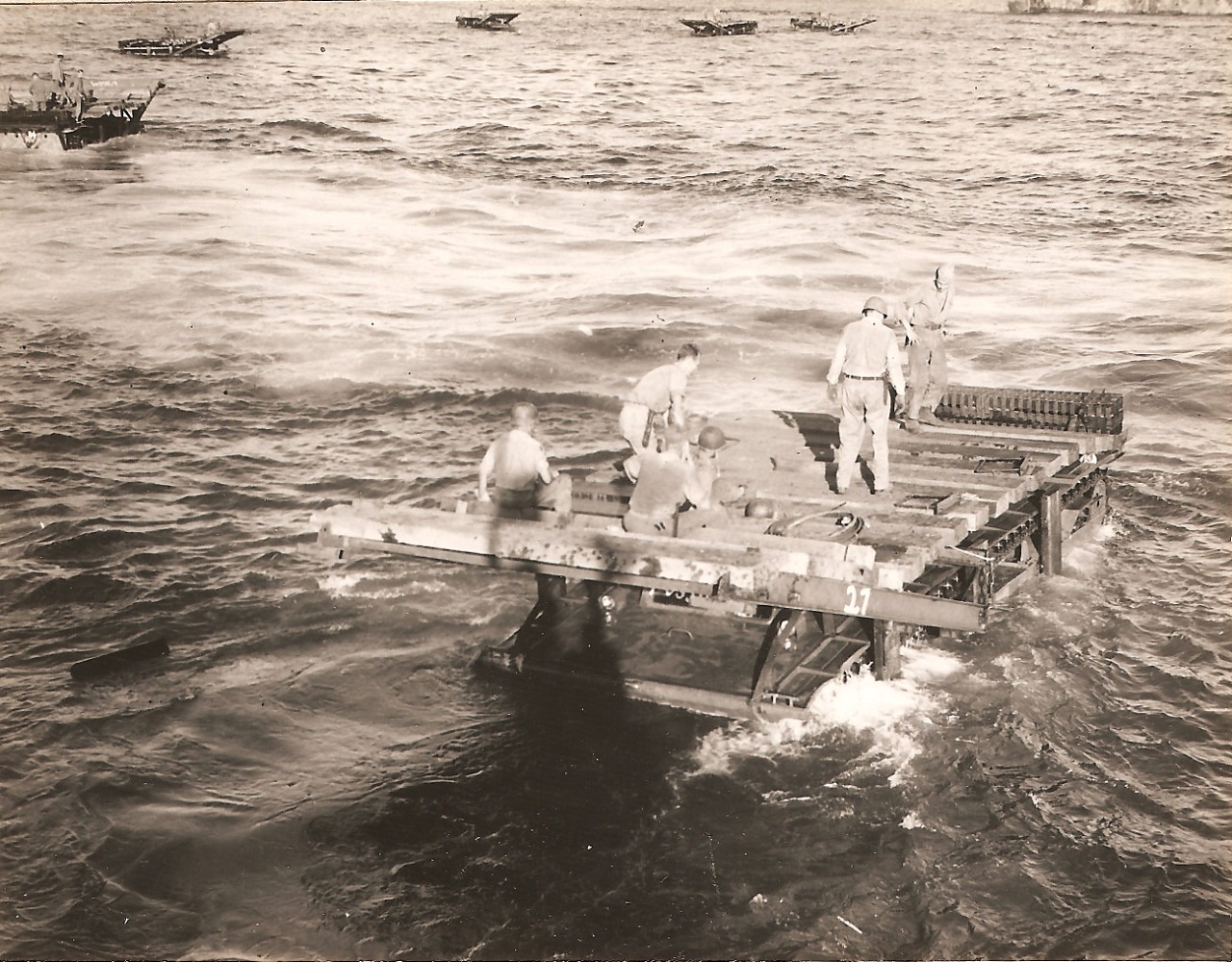 The result was an LVT carrying its own ladder with which to scale the cliffs. Four Civil Engineer Corps officers and 30 Seabees went in with the assault waves on Tinian, scouted the shoreline then the Doodlebugs moved in. Hooks attached to the end firmly caught on the cliffs tops and the Doodlebugs were reversed, backed out from under the ramps and let one end fall into the water to rest on the coral bottoms. Ramp crews leaped out, determined the ramps were firmly anchored then the Doodlebugs rumbled up out of the water and over the cliffs. Seabees remained to maintain the ramps and to assist in building the access roads to them. 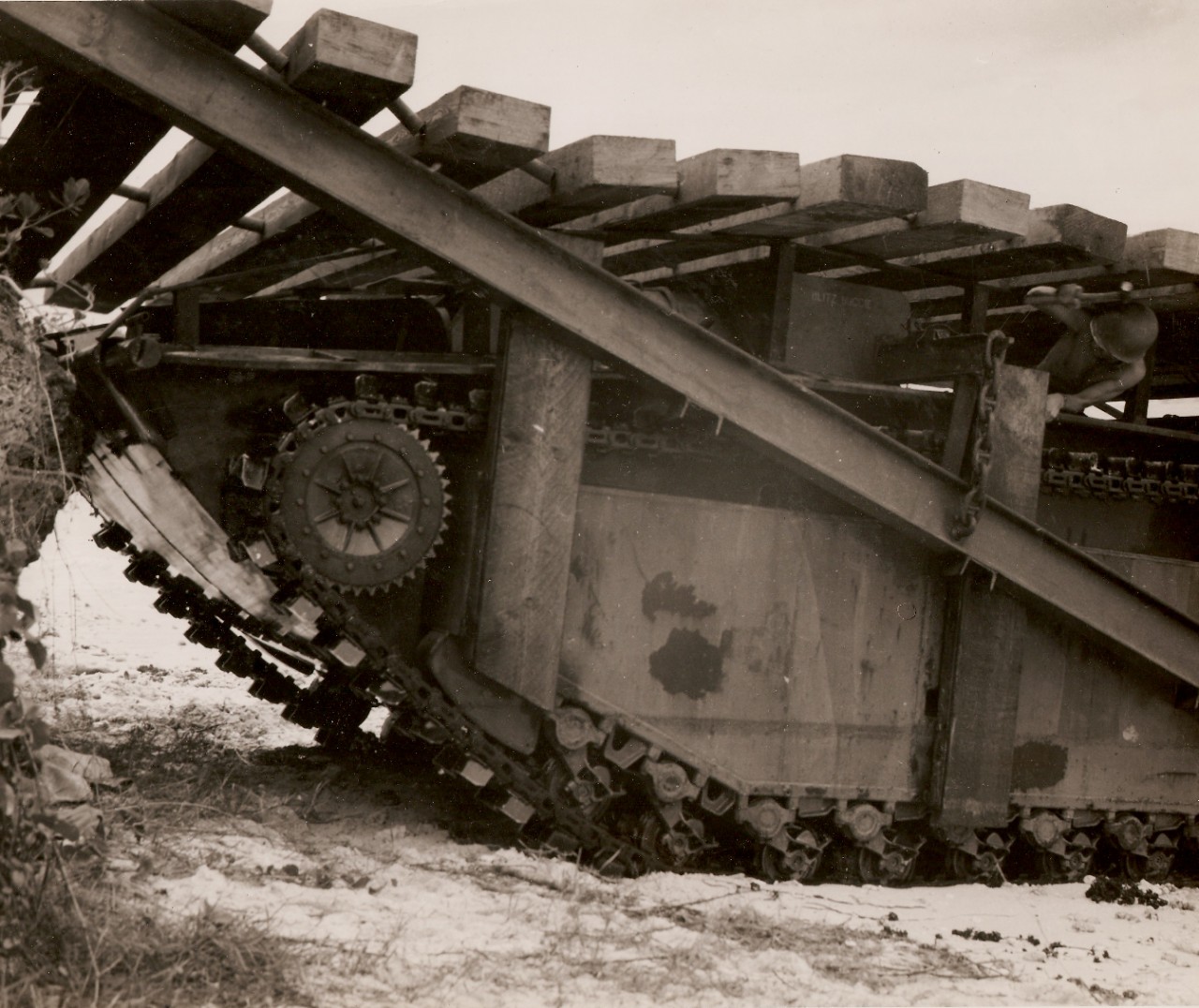 Hooking ramp to cliff during test on Saipan.

As the ramps were put into place and made ready, a flow of amphibious equipment “walked” up the coral barriers behind them. Soon a steady stream of American motorized might was pouring into the island spreading out and driving the already frustrated Japanese defenders back from their beach positions. This tactical advantage helped the Marines capture the beachhead and soon Tinian was under American control. 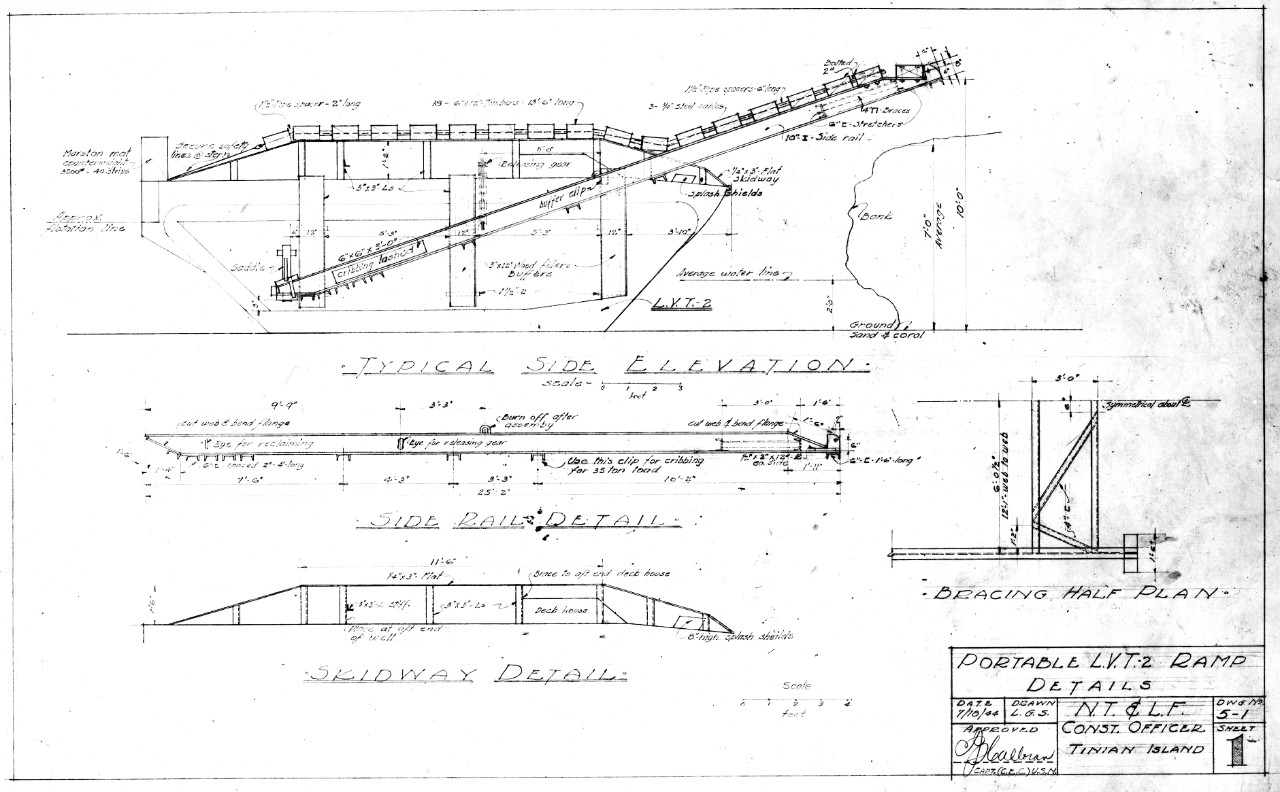 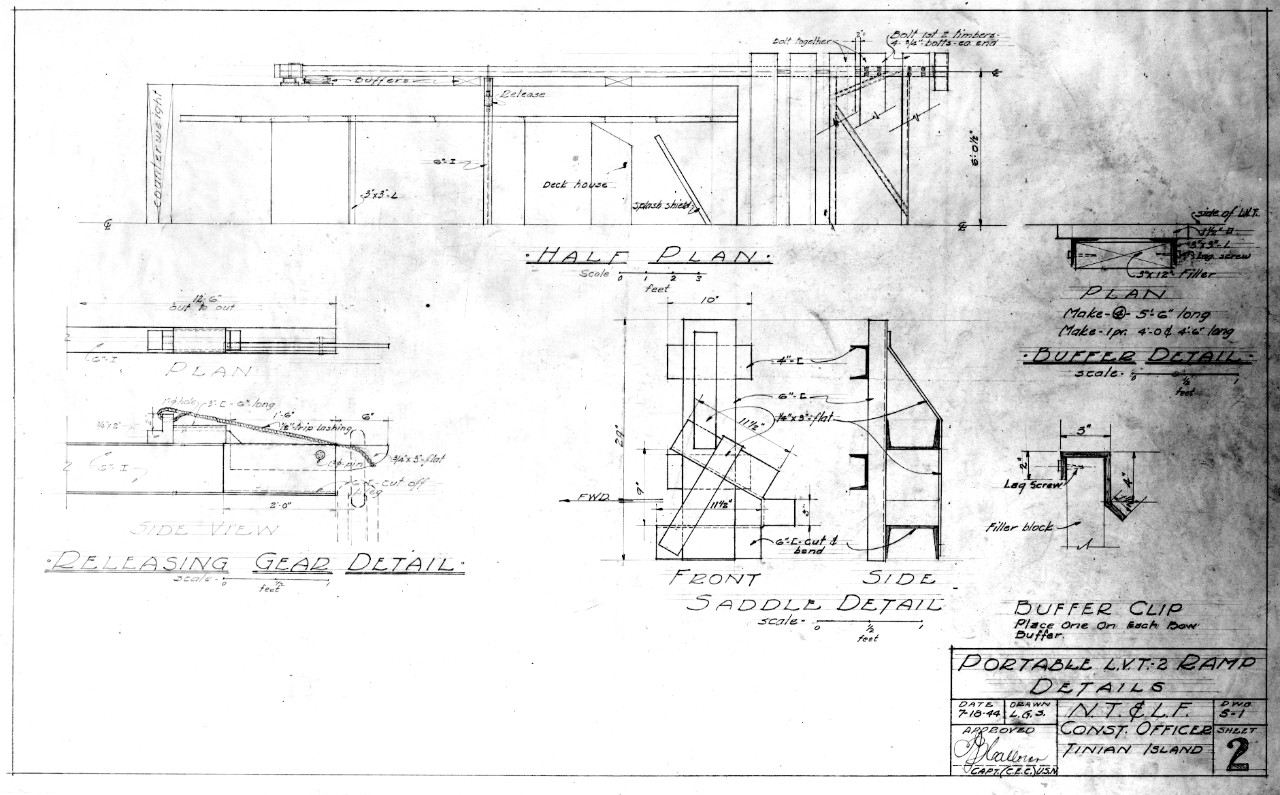 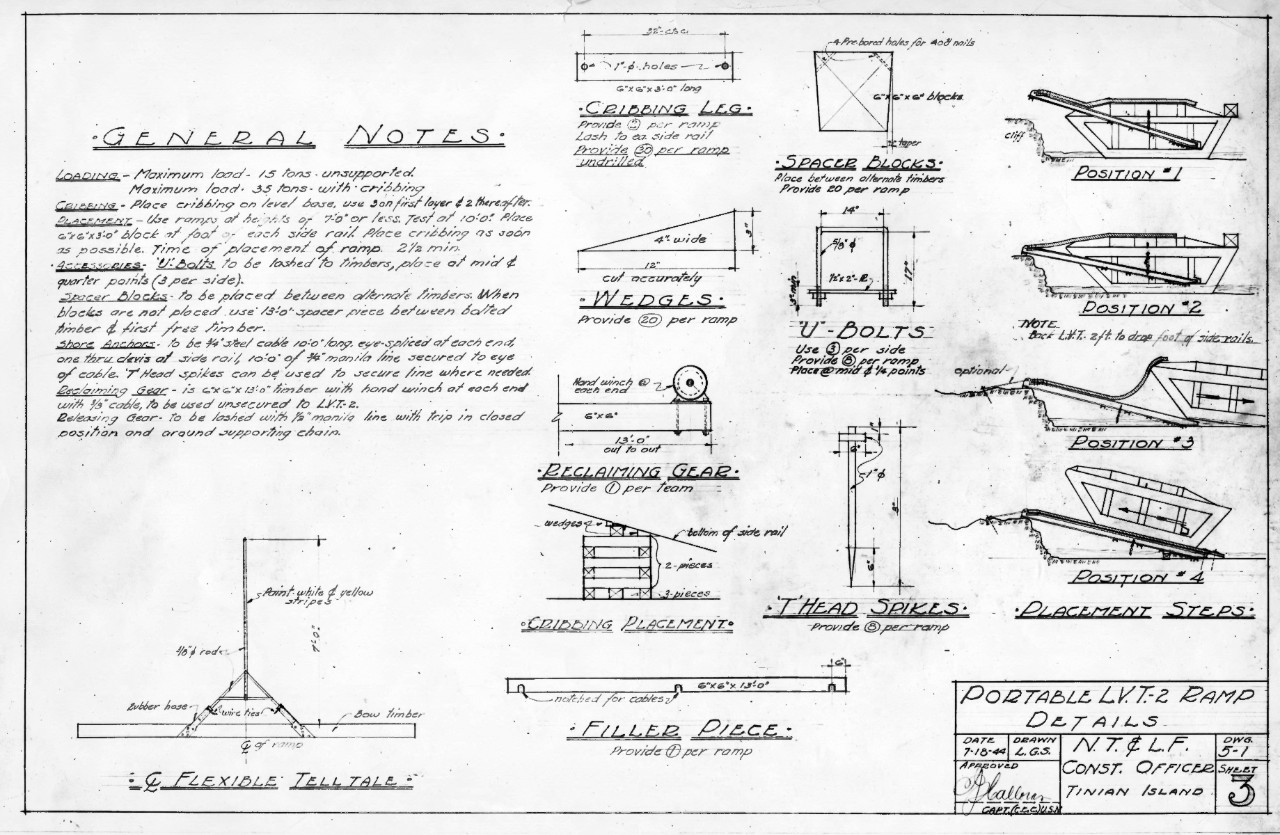