The Korean War: The Inchon landing , the "Great Train Robbery," and airfield construction 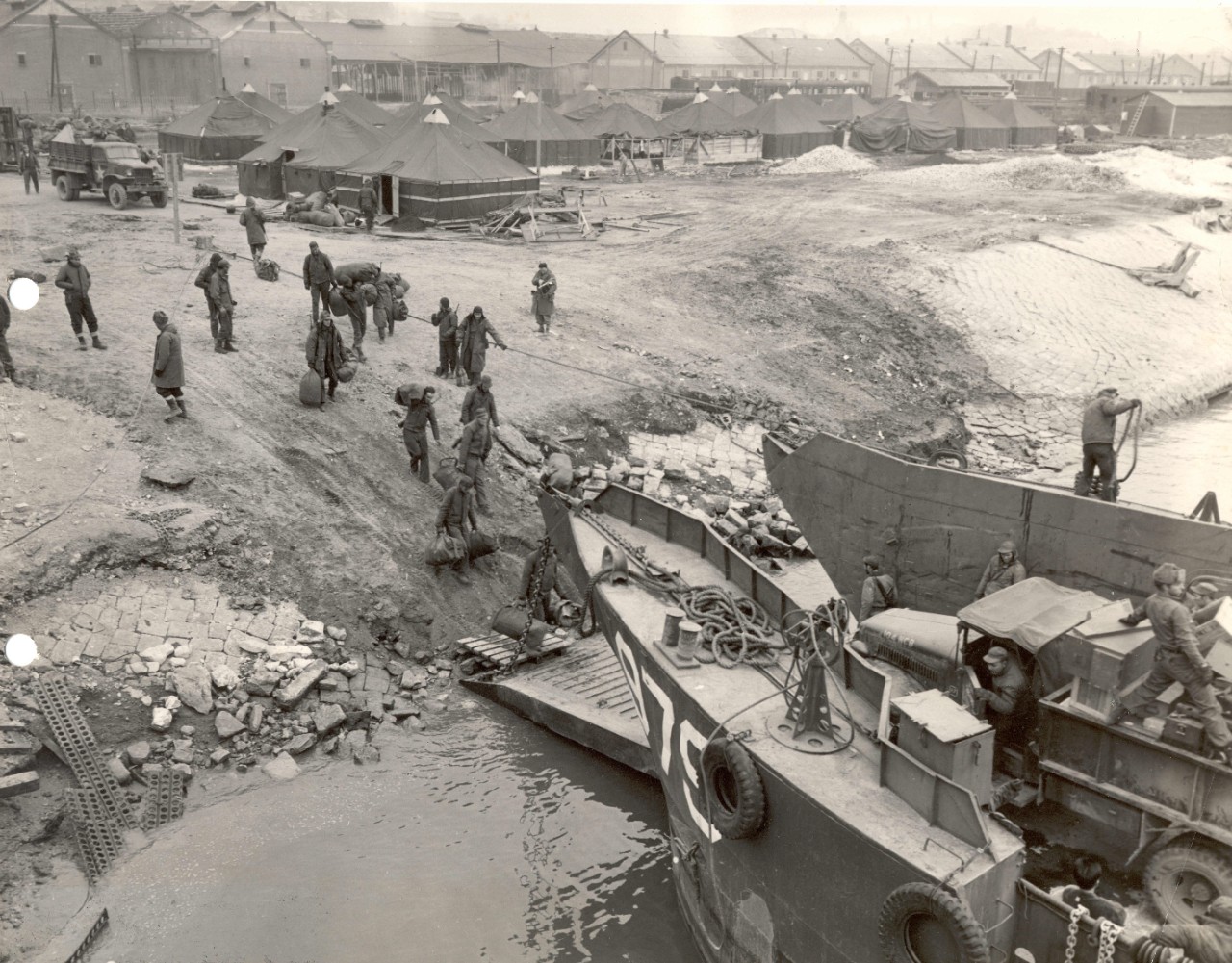 Originally established as a wartime expedient, the Seabees more than proved their worth during World War II, and were made a permanent part of the Navy in 1947. As a result, the Civil Engineer Corps was permanently transformed from a staff corps of essentially noncombatant specialists with no right of command into a corps of officers who exercised command over Navy units in both noncombat and combat situations. The first test of the new regular Navy Seabees proved to be the Korean War.

On 25 June 1950 the armed forces of the communist People's Democratic Republic of Korea invaded the non-communist Republic of Korea to the south. Thus, the war between North and South Korea began, and both U.S., United Nations and Chinese communist forces would be drawn into the conflict before it ended in 1953. After the initial success of the North Koreans, General of the Army Douglas MacArthur determined to carry out an amphibious landing at Inchon, behind the North Korean lines, to disrupt the enemy's logistic support. The Seabees played a pivotal role in this landing.

During the summer of 1950, Naval Construction Battalion 104 engaged in amphibious exercises and training which culminated in practice landings at Coronado. The battalion had been reestablished on 6 March 1947 with the mission of assembling and placing pontoon structures, beach rehabilitation, harbor development, salvage, material handling, and the training of reservists in all these operations. The new battalion's first commanding officer was CDR Alexander C. Husband, CEC, USN, who would later be the Commander of the Naval Facilities Engineering Command (the new name of the Bureau of Yards and Docks from 1966) during the Vietnam War. During the three years following its reestablishment, NCB-104 developed proficiency in its specialized mission through intensive training and participation in landing exercises with the Marines and Army in California, Hawaii, and Alaska. Given its amphibious landing specialty, NCB-104 was ordered to Korea to support the Marines during the Inchon landing.

NCB-104 sailed for Yokosoka, Japan, in three echelons on 26 July, 7 August, and 14 August 1950.    At Yokosoka the pontoon equipment was combat loaded in record time and the battalion sailed aboard two LSTs for Korea and Inchon. During the first phase of the assault on 15 September, NCB-104 helped take Wolmi Do, an island connected by a causeway to shore and which formed part of the Inchon harbor breakwater. After this, the Seabees moved against the two targeted landing areas, “Red Beach” and “Blue Beach,” which were located just to the north and south of Inchon proper. The landing was very difficult because the beaches were such in name only. At “Red Beach” there was only a seawall, and the tide ran to 30 feet. The landing craft had to come in at high tide because that was the only way they could reach the beaches.

The Seabees came ashore with the Marines and quickly assembled long pontoons causeways so that unloading of equipment, supplies, and reinforcements could proceed across the huge mud flats left in the wake of the outgoing tide. On D-day plus one, the battalion emplaced a dock section for tide-level landings and General MacArthur came ashore across it the following day. The high tides, the seawalls, and enemy resistance made the Inchon landing a. very hazardous operation. Nevertheless, although a high-risk operation, it was a brilliant success. U.S. forces cut the North Korean supply lines and the communist offensive collapsed.

By 1 October NCB-104 had started loading ships for an amphibious landing at Wonsan, located on the upper east coast. The battalion subsequently participated in the landing and later evacuated casualties. On 30 October 1950 NCB-104 got a new name; it was redesignated Amphibious Construction Battalion 1, the title that it still bears today. On 1 November all elements of ACB-1 were reassembling at Yokosoka; their role in the war was over. For their performance during the Inchon landing, the men of ACB-1 earned three bronze stars, eight commendations with Combat “V”, the Presidential Unit Citation, and the Korean Presidential Unit Citation.

A few days after the Inchon landing one of those events so characteristic of the Seabees took place.  Air reconnaissance reported that eight switcher locomotives were trapped by cut rail lines in a rail yard at Yong Dong Po, which was on the American line of advance.  A Seabee chief   petty officer, who was a former railroad man, volunteered to go forward, seize the locomotives, and bring them back to the U.S. lines. The chief and eight fellow volunteers crossed the enemy lines, made their way to Yong Dong Po, and found the locomotives standing in the switching  yard of the Kirin Brewery. The Seabees, taking advantage of their good fortune, loaded 15 cases of beer and sake aboard the locomotives, got up steam, and left. On the way back they were first fired upon by North Korean infantry and later by advancing U.S. Marines. The Marines thought that the North Koreans were using the locomotives to mount an attack, and opened fire on the locomotives until they finally recognized that the occupants were wearing U.S. uniforms. The Seabee chief subsequently admitted that sampling the beer and sake back at the brewery may have encouraged the Seabees to greater effort in getting the trains back to the U.S. lines.

In addition to the amphibious operations, Seabee detachments from ACB-1, NMCB-2, and a new unit, Construction Battalion Maintenance Unit 1, provided support at Marine Air Group airfields at Pohang, Kimpo, Seoul, Taegu and other locations. When the battle lines of the U.N. and communist forces stabilized at the 38th parallel, the need arose for an emergency landing field for damaged aircraft returning from raids in the north and unable to reach their airfields or   carriers. The project was given the code name “Crippled Chick” and Yo Do, an island in Wonsan Bay, was selected as the site. Yo Do and other islands in the bay had been captured by South Korean forces two years earlier. The South Koreans were currently using the islands as positions from which to maintain the siege of Wonsan. Three officers and seventy-five men from ACB-1 were sent to Yo Do with orders to have an emergency airstrip operational in 35 days. They completed it in only 16 days while under constant enemy artillery bombardment!

Thus, the new Seabees of the regular Navy displayed that same “Can Do” spirit made famous during World War II.

General Information on Seabees in Korea

Press Release, Background on the Seabees in Korea [PDF, 383 KB]

Seabees Between the Dragon and the Deep Blue Sea [PDF, 652 KB]

With the First Marine Aircraft Wing in Korea [PDF,  116 KB]