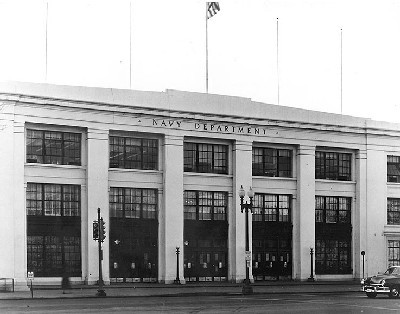 As inconceivable as it might now appear, the entire State, War (now Army), and Navy Departments were once housed in the present-day Executive Office Building, immediately to the west of the White House. Its style, “Second Empire,” might be better described as “early stone wedding cake.”

Although the grotesque structure was still occupied by senior military officials until the outbreak of World War I, the majority of staff offices had long been dispersed throughout the District of Columbia. Entry into World War I made physical consolidation of these office an urgent necessity. The first site combining War and Navy Department needs proved unsatisfactory and an additional site for the Navy and an overflow building for War Department use was sought by the Bureau of Yards and Docks.

The project became the World War I equivalent of the Pentagon and years later, when that massive structure was under construction, the similarities became even more apparent.   The importance of the work demanded top-level administration, a job which fell to the then Assistant Chief of the Bureau of Yards and Docks, CDR Archibald L. Parsons, CEC, USN (who would later as a rear admiral be Chief of the Bureau from 1929 to 1933). Parsons envisioned a three story building with 60-foot parallel wings extending to a depth of 500 feet and connected with a frontal building of executive offices. The War Department having found its new quarters short of space requested that the Navy expand the plans to include an additional structure to accommodate War Department personnel. The Bureau went back to the drawing boards and produced designs for two similar structures which were subsequently presented to Congress for approval. In essence, the structures were identical except that the Navy Headquarters would have nine wings and the Army Headquarters (later known as the “Munitions Building “) would have eight. The buildings would be separated by a 100-foot roadway, but connected above by a bridge corridor. When built, the new building complex would be termed the world's largest office building, boasting 1,800,000 square feet, or 41 acres of floor space.

But where to put the new building complex? Time was of the greatest importance because the U.S. had now become a full participant in the war and was rapidly expanding the size of its  armed forces which meant a rapid increase in headquarters personnel who needed office space. The exigencies of war allowed circumvention of the Fine Arts Commission which normally controlled the placement of new edifices within the boundaries of the District of Columbia. And although Congress only authorized the complex as a 11 temporary construction,11 the reinforced concrete called for in the design placed it in the “intermediate” or “semi-permanent” category.

Informal site surveys were undertaken “afoot and by motor” and several choice sites were selected. Preliminary plans were actually drawn for occupancy of the Ellipse. Others favored the northwest corner of the Washington Monument grounds. As it was, the site selected was the lesser blow to Pierre L'Enfant's aesthetics, at least for the moment. The site picked was the corner of “B” Street (Constitution Avenue) and 17th Street, which was known as “Potomac Park.” Assistant Secretary of the Navy Franklin D. Roosevelt, is given credit for obtaining Presidential approval of for this site.

However, the nation was at war and -- not withstanding later criticism of the site -- credit must be given to the Bureau of Yards and Docks and its Civil Engineer Corps officers for making the project a reality. The Navy awarded the contract to the Turner Construction Company of New York and work began on 25 February 1918. For the first time in the Navy's history, the preliminary plans included automobile parking, consisting of a macadamized area to accommodate 500 vehicles placed at the rear of the building.

The general contractor employed as many as 3,400 employees during the peak months of construction. The contractor's main problem was the transience of the common labor gangs which accounted for a total number of 7,500 laborers employed on the project. even months after ground breaking, the first Navy and War Department occupants moved in; full occupation of the complex was achieved in early October 1918. The Bureau reported with pride the modern conveniences included in this "temporary" structure: ice water fountains, linoleum floor covering, and concerning the structure itself, “enduring materials and permanent footings.” A month after full occupancy was reached, the 15,000 employees assigned there cheered the end of the war on Armistice Day, 11 November 1918.

Like so many other “temporary structures” in the government, the wartime emergency building, known as “Main Navy,” was to remain in use for decades, in spite of the complaints of the Fine Arts Commission and thousands of Washingtonians who objected to its squalid appearance near one of the nation's most hallowed shrines. Finally, President Richard M. Nixon gave orders to “get rid of that monstrosity.” Nevertheless, monstrosity or not, “Main Navy” remains a major engineering achievement of the First World War era.