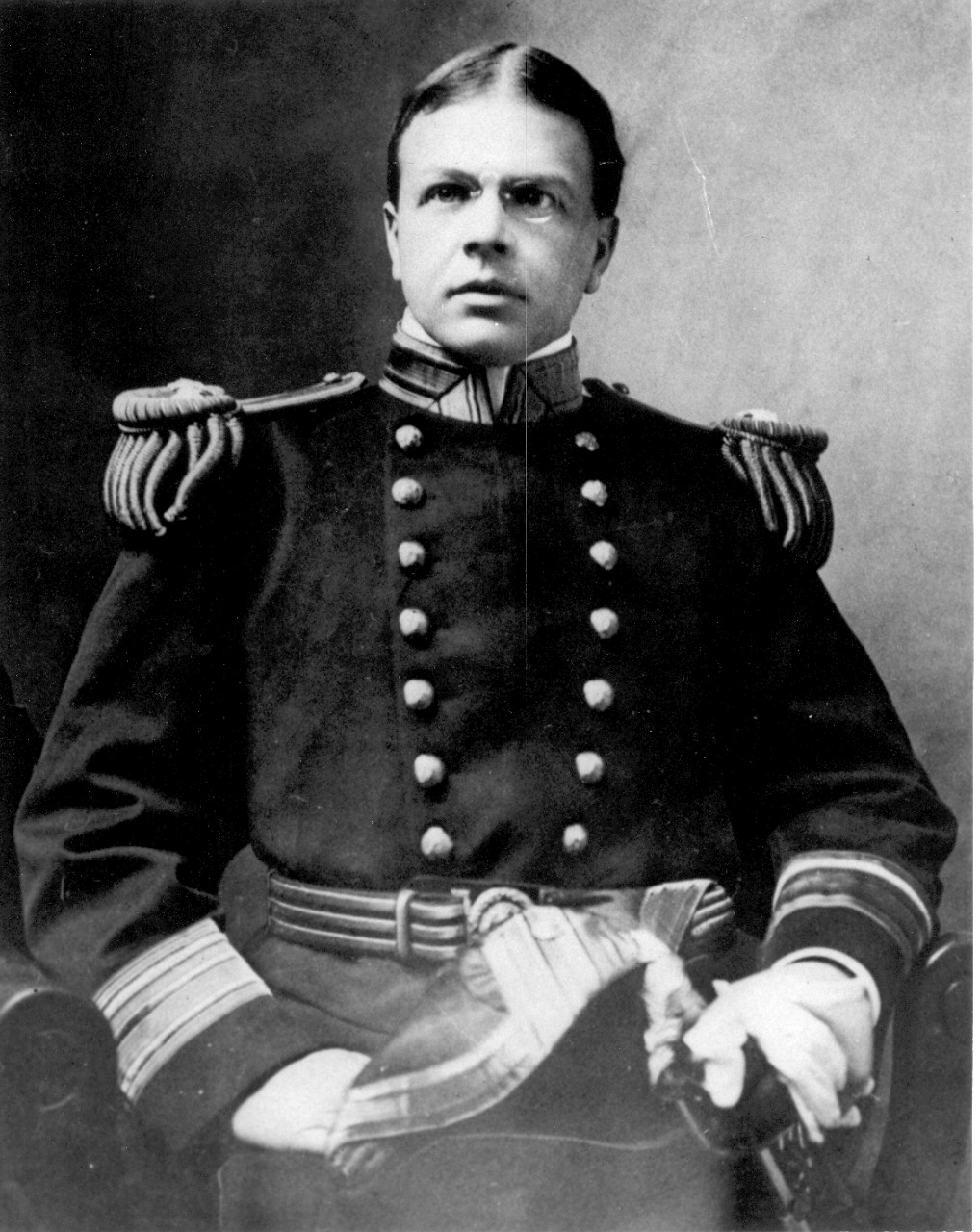 Like Aniceto Menocal, Harry Rousseau was another Civil Engineer Corps officer who was intimately involved with the trans-isthmian canal project. Rousseau, however, played an essential role in the actual completion of the project. He spent a good part of his career participating in the construction of the Panama Canal.

Rousseau was born on 19 April 1870 in Troy, New York. After being educated in the local public schools, he went to Rensselaer Polytechnic Institute and graduated in 1891 with a degree in civil engineering. Rousseau had excelled during his years at Rensselaer, becoming both a brilliant engineer and an expert mathematician. After a few years' work in the private sector, he was, on 29 September 1898, appointed a Civil Engineer Corps officer with the relative rank of lieutenant, junior grade. Thus, began a most unusual naval career.

While serving at Bureau of Yards and Docks headquarters from 1899 to 1903, Rousseau came to the attention of President Theodore Roosevelt who subsequently selected him as Chief of the Bureau to succeed the retiring Mordecai Endicott. Rousseau was only the second Civil Engineer Corps officer to hold this position. LT Rousseau was selected over five other lieutenants, two lieutenant commanders, two commanders, and two captains. Rousseau returned to Washington from his current posting at the Mare Island Navy Yard, took the oath of office as chief on 5 January 1907, and was advanced to the temporary rank of rear admiral. At the time he was 36 years old and, to this day, remains the youngest officer in the Navy's history to be promoted to rear admiral, as well as the youngest officer to have ever been Chief of the Bureau of Yards and Docks. One final distinction, however, is that he remains the chief with the shortest tenure in office, for forces were at work that would propel him to the site of his greatest  challenge -- the Panama Canal.

In 1903 the United States acquired a concession from the newly-established Republic of Panama to build the canal, established the Isthmian Canal Commission to oversee the work, bought the defunct French canal company's equipment, and commenced construction. By 1907, however, work on the canal was stalled. Only 4 percent of the necessary excavation had been completed and, in March, the civilian head of what was now the third Isthmian Canal Commission   resigned. Roosevelt, nearing the end of his second term, justifiably feared that the U.S. canal project might share the fate of the earlier French effort, if significant progress were not made. To expedite the project, Roosevelt appointed a fourth commission composed of military men and chaired by Lieutenant Colonel George W. Goethals of the Army Corps of Engineers. Harry Rousseau was among the officers appointed to this commission.

Arriving at the canal site, LT Rousseau was placed in charge of the Department of Building Construction, Motive Power and Machinery, and Municipal Engineering, which comprised some 10,000 employees.  The department provided support to the three divisions responsible for excavation, lock construction, and sanitation. As department head, Rousseau was responsible for meeting the building construction requirements of these divisions. He had to provide housing, hospitals, schools, messing and recreational facilities for the approximately 40,000 Canal Commission employees; maintain all existing and newly constructed facilities; install and maintain all canal construction machinery, including air compressor plants and electrical installations; and provide water and sewage systems, and road paving throughout the Canal Zone.

By 1908, Rousseau's department had accomplished most of the above, mainly due to his talent for managing a greatly diversified organization. In July 1908 the canal project was completely reorganized on geographic lines. Rousseau's department was abolished, and the canal project was divided into the Atlantic, Central and Pacific Districts, each under a district engineer. Each district engineer was responsible for the total effort in his district, not only canal construction, but also all support activities.

Colonel Goethals, as Chief Engineer, divided his staff into three divisions, each headed by an Assistant Chief Engineer. The First Division was responsible for all civil engineering problems, the Second Division for mechanical questions, expenditure oversight, estimate preparation, and cost accounting, and the Third Division for hydrographical and meteorological work, general surveys not included in the purview of the construction divisions, and special investigations assigned by the Chief Engineer. Goethals placed Rousseau in charge of the Second Division

Although he got his half stripe in 1909, LCDR Rousseau still had far to go to recoup the rank held two years before. It also became apparent in 1909 that the canal would be finished. The main concern now became economy: to complete the canal at the least cost. This required the highest degree of funding management and it fell to Rousseau's Second Division to provide it. The division established a series of management methodologies to increase efficiency and better utilize resources. Shops were standardized, personnel strength reduced, and surplus equipment returned for storage and redistribution. Standardization became the watchword throughout the Canal Zone. The effort resulted in annual increases in efficiency-- as much as 25 percent over each preceding year. In 1911 Goethals gave Rousseau an additional assignment: the construction of adequate terminal facilities at Cristobal and Balboa. Since these facilities called for the construction of dry docks, breakwaters, coaling plants and similar facilities, it was only natural that Rousseau, a Navy Civil Engineer Corps officer, should be selected.

The Panama Canal was officially completed in 1914 and Rousseau's position as Assistant Chief Engineer was terminated along with the Canal Commission on 1 April 1914. Secretary of the Navy Meyer requested Rousseau's release because he was contemplating his reappointment as Chief of the Bureau of Yards and Docks. However, Goethals, who had meantime been appointed Governor of the Canal Zone, advised Meyer that Rousseau was indispensable and requested that he remain in the zone as head of the still ongoing terminal construction. Rousseau successfully completed the terminal construction a few months later and returned to the U.S.

By an Act of 4 March 1915, Congress extended its thanks LCDR Rousseau and authorized the President to advance him to rank of rear admiral, which was done effective on that date. The act also allowed Rousseau to retire at 75 percent of his pay should he so choose; however, the 45- year old rear admiral elected to remain on active duty.

On 29 August 1916 RADM Rousseau was named to a commission charged with investigating and reporting on the establishment of additional Navy yards and stations. During World War I he also served as Assistant General Manager and Head of the Shipyards Plant Division of the Emergency Fleet Corporation, Associate Director of the United States Housing Corporation, Manager in Charge of the expenditure of Navy funds for improvement of shipyards having contracts for Navy vessels, and as a member of the Government Munitions Board. His World War I service earned him the Navy Cross.

Since 1914 RADM Rousseau, in addition to his other duties, had been a director of the Panama Railroad Company and the Panama Railroad Steamship Company. In this capacity, he was on his way to the Canal Zone aboard the SS CRISTOBAL on an inspection trip when he died of a cerebral hemorrhage on 24 July 1930 at the age of 60. RADM Rousseau was buried in Arlington Cemetery with full military honors.

RADM Rousseau's important contribution to the construction of the Panama Canal, one of the most difficult projects in the history of engineering, was further recognized in 1932 when a postage stamp was issued with his portrait on it. He remains the only Civil Engineer Corps officer to have his likeness on a postage stamp as a personal tribute.