The mission of the U.S. Navy Seabee Museum (USNSM), a Department of the Navy museum, is to ensure that the construction and engineering accomplishments of the Seabees and the Civil Engineer Corps to the Navy and the nation are not forgotten, remain relevant, and inspire as many people as possible.

The United States Navy Seabee Museum was established in 1947 and is the second oldest Navy museum in the Naval History and Heritage Command (NHHC) system.  The Museum is supported by the CEC/Seabee Historical Foundation, which also supports the Seabee Heritage Center in Gulfport, Mississippi.

The Museum is located outside the perimeter fence of the Naval Base Ventura County in Port Hueneme, California. A new 38,338 square foot museum facility was built in 2010, moving the museum outside the naval base to allow the general public access.

The United States Navy Seabee Museum collects, preserves, and exhibits artifacts related to the history of the Civil Engineer Corps and the Naval Construction Force, better known as the Seabees. The Naval Construction Force builds and maintains the United States naval shore establishments around the globe and supports amphibious operations of the Navy’s expeditionary force. Seabees also perform global humanitarian missions such as well-drilling and disaster relief. Established in 1941, they served as the construction force for the Navy during World War II. The Seabees’ “Can Do” attitude made them legendary within the Armed Forces, and their character epitomized the resilience of that generation. Postwar, the Seabees and Civil Engineer Corps officers played critical roles in supporting the Navy’s implementation of American foreign policy. The “Can Do” attitude still drives today’s Seabees: “the difficult we do immediately, the impossible takes a little longer.”

The United States Navy Seabee Museum is part of the Naval History and Heritage Command (NHHC).  The Naval History and Heritage Command traces its lineage to 1800, when President John Adams asked Benjamin Stoddert, the first Secretary of the Navy, to prepare a catalog of professional books for the secretary’s office. The NHHC is the central resource for today’s operational Navy and acts as the service's institutional memory. 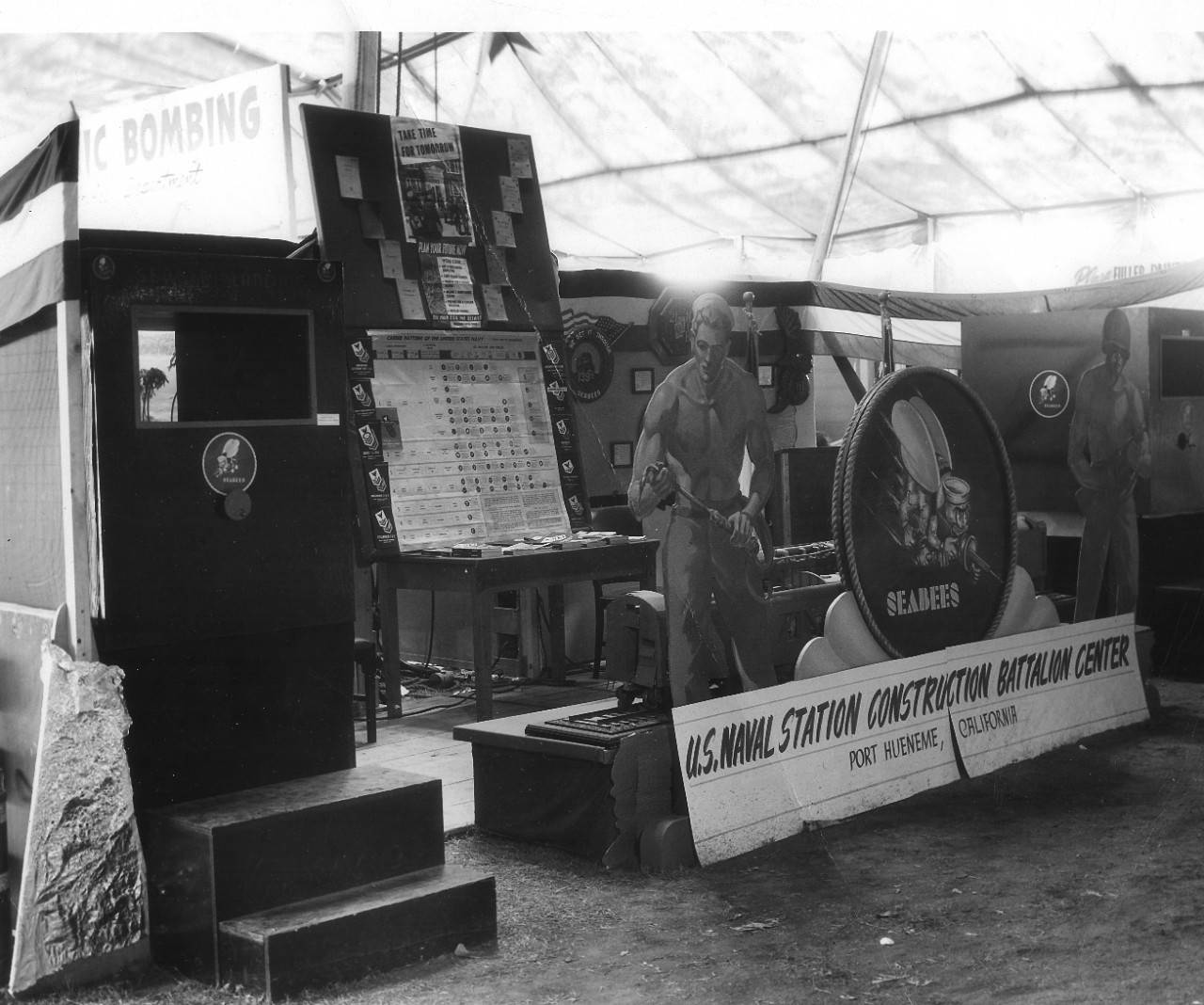 During World War II, approximately 250,000 Seabees passed through Naval Construction Battalion Center (NCBC), Port Hueneme, on their way to or from the Pacific Theater. Anxious to get home after extended duty overseas, the Seabees left vast quantities of memorabilia and "war trophies" in Port Hueneme rather than dealing with the lengthy government paperwork required to ship them home. By 1946, the building known as "Theater C" was overflowing with abandoned war souvenirs. The Navy often publicly displayed these artifacts as local public events such as the Ventura County Fair. 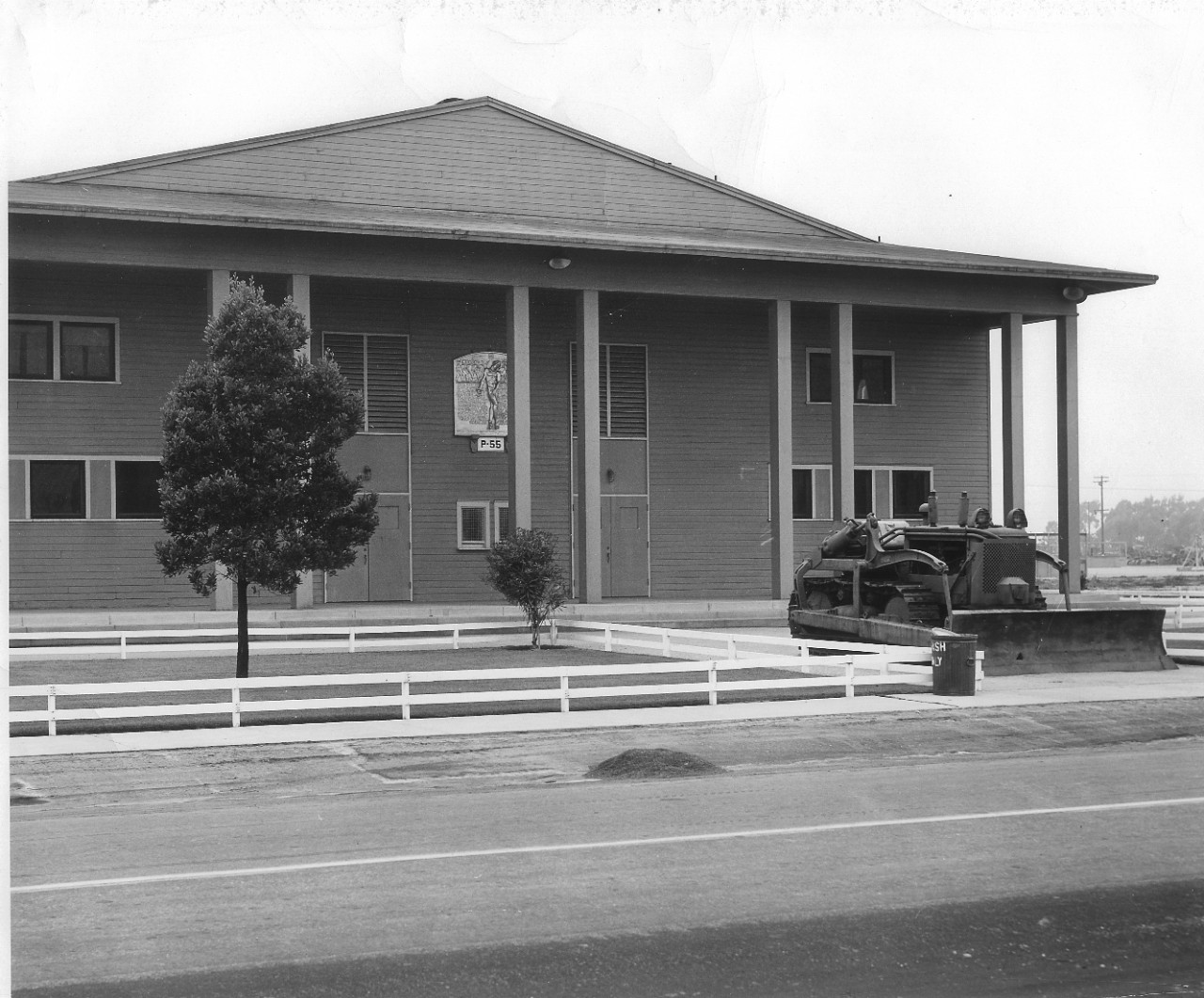 Commander Neil Kingsley, the Officer in Charge of the Training and Distribution Center, considered establishing a museum to stimulate interest in and preserve the history of the Seabees. Commodore Beauford W. Fink, senior officer at NCBC, Port Hueneme, strongly supported the idea. After sifting through the collection of war artifacts, Kingsley initiated a campaign to obtain more Seabee related memorabilia to balance the collections. Photographs, cruise books, uniforms, unit flags, newspapers, and other Seabee items were added to tell a more complete story of their accomplishments during the war. 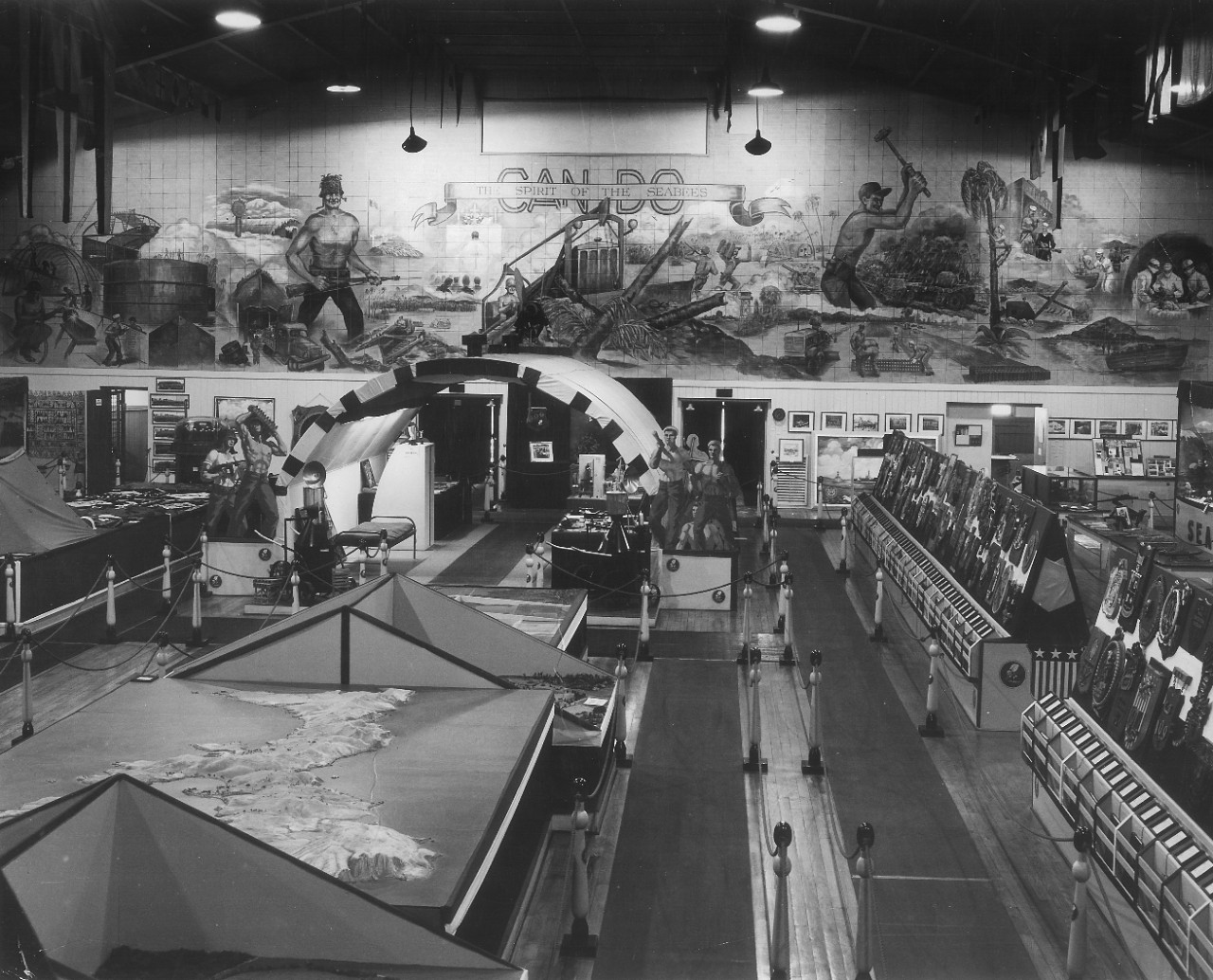 Rear Admiral John J. Manning, Chief of the Bureau of Yards and Docks, dedicated the first Seabee Museum in "Theater C" in October 1947 (today "Theater C" is known as the Beehive Gym). Despite limitations of staffing, display equipment, and funding, the museum was buoyed up by the enthusiasm of Seabees, Civil Engineer Corps officers, and veterans for their history 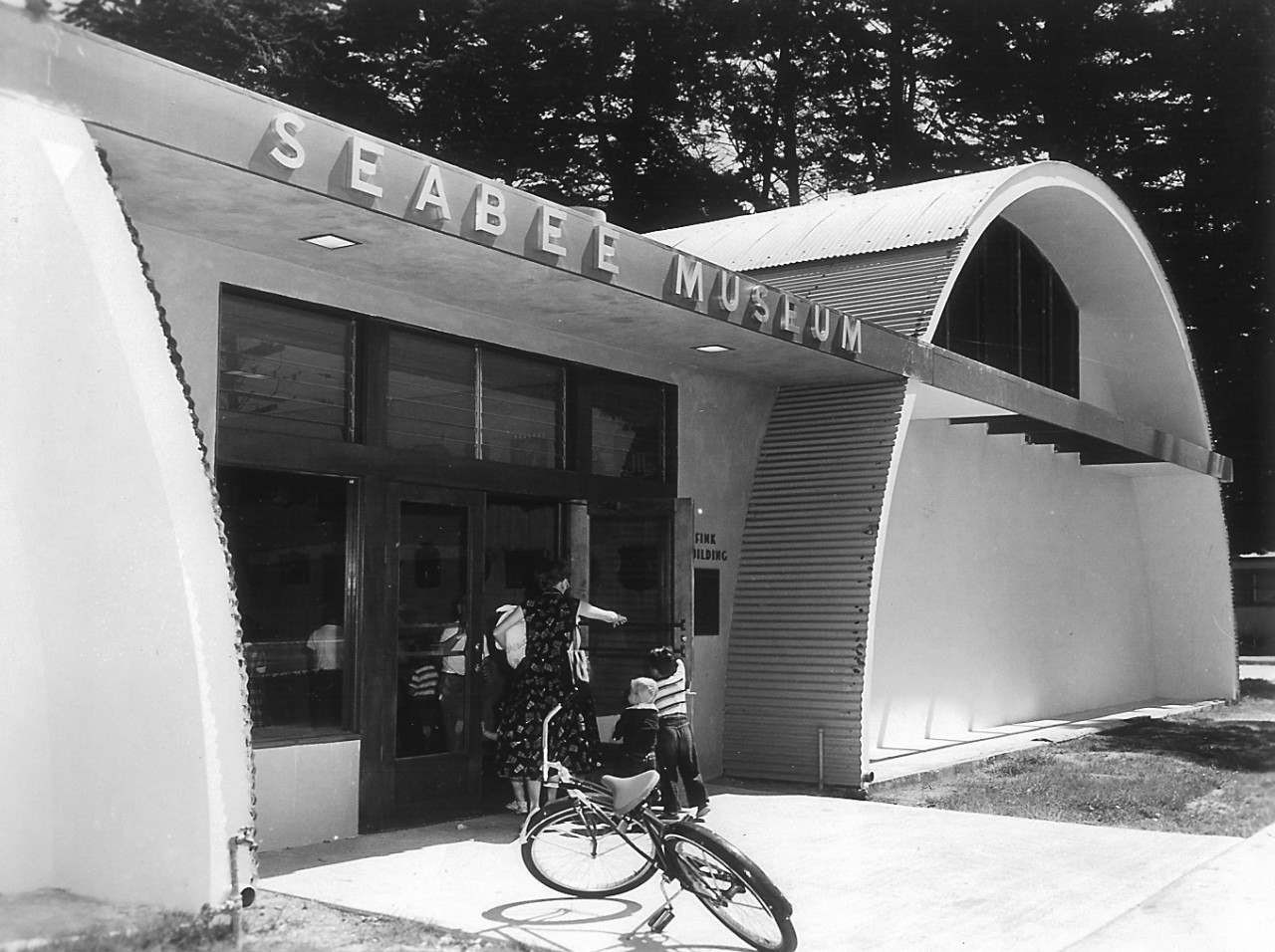 By the early 1950s, the museum in "Theater C"had become more of a warehouse than a display area. Not only was the collection outgrowing the facility, but the location of the building on the base limited the access to the museum and attendance was down. In 1954, Captain William Church, Commanding Officer of NCBC, Port Hueneme, and Miss Helen Fairbanks, historian for the Bureau of Yards and Docks, pushed for the reorganization and relocation of the museum into a larger, more centrally located facility. The present facility comprised of two large Quonset huts known as "Elephant Huts," and remodeled between 1955 and 1956. The museum was rededicated in October of 1956 by the new base CO, Captain Eugene Peltier. 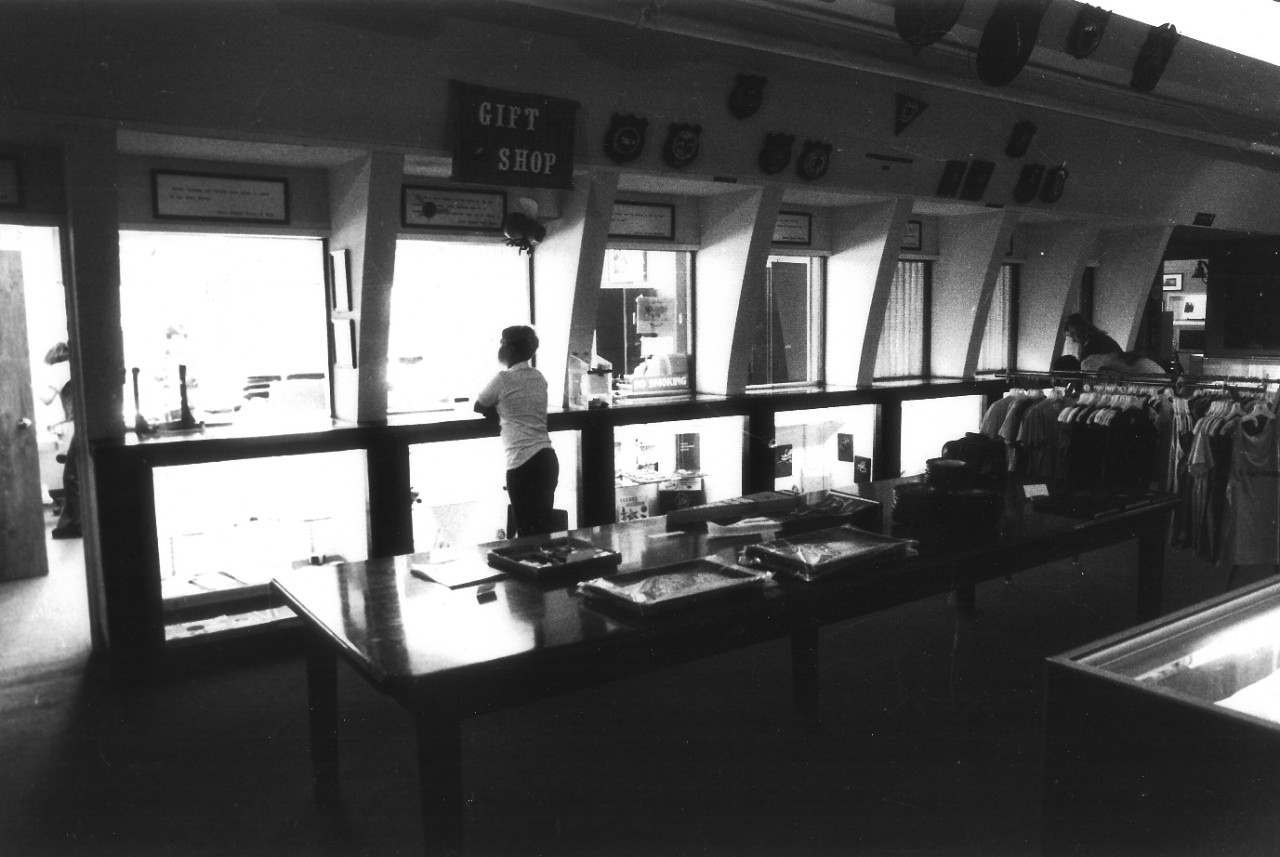 The collection continued to expand, and by 1965, it once again faced outgrowing its facility. Discussions began on whether to relocate or expand the museum. The decision to expand the facility off the West Quonset Hut was made when ADM Ben Moreell (ret) decided to donate his complete collection, using modular facility construction that Seabees already used around the world. Construction materials were paid for from the profits of Museum Gift Shop. Seabees did the work! 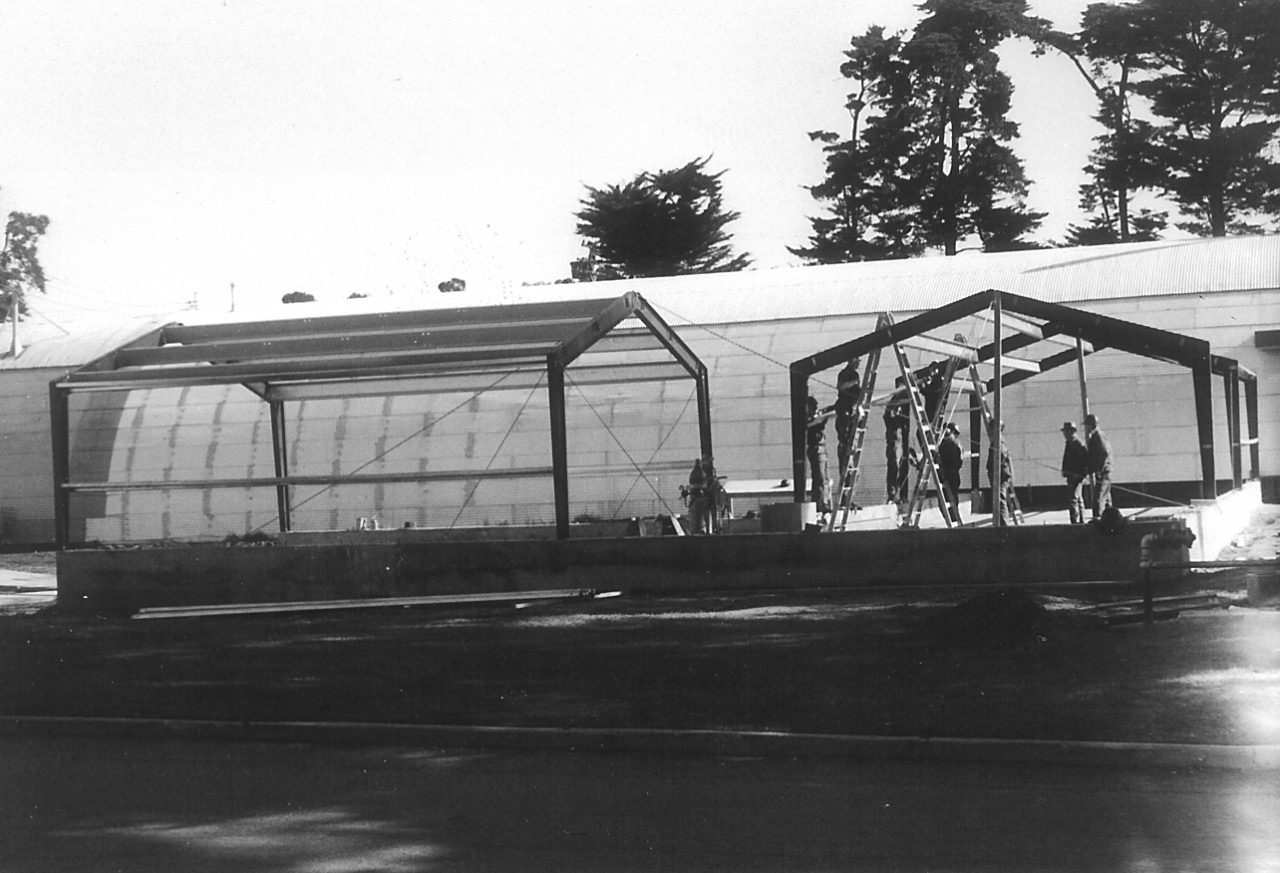 The wing extension was dedicated in 1967 to honor Admiral Ben Moreell, known as the father of the Seabees, and is now called "The Moreell Wing". Admiral and Mrs. Moreell attended the official ribbon cutting with Felix DeWeldon, sculptor of the Marine Corps Memorial and the Seabee Memorial. A major portion of the new 4,500 square foot wing was dedicated to the Moreell Collection, which the admiral donated to the museum before the ribbon cutting. 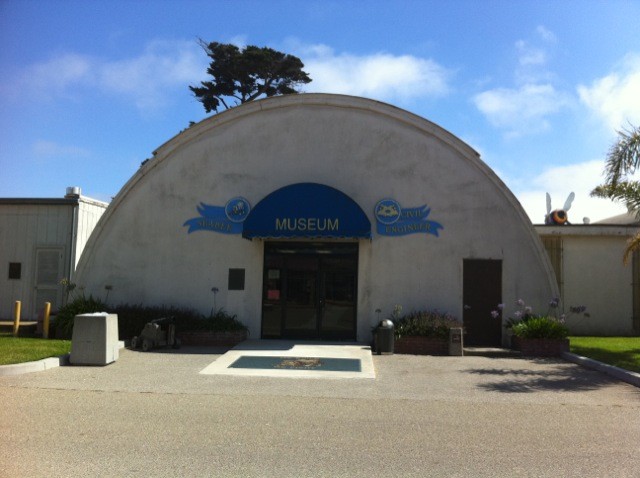 By 1984, the museum again needed more space for an ever-increasing collection that reflected the ongoing involvement of Seabees in world events. New offices for staff, an expanded Museum Store, as well as new artifact and archival storage spaces were created along with the CEC Gallery.

The gallery was dedicated to highlighting the accomplishments of CEC and its officers in the 1990s. The CEC Gallery tells the story of the Navy's Civil Engineer Corps, the officer arm of Seabee units. The CEC's old and proud tradition has its historical roots in the Civil War. Officers have served in every major US conflict since that time, and numbered over 10,000 during World War II. 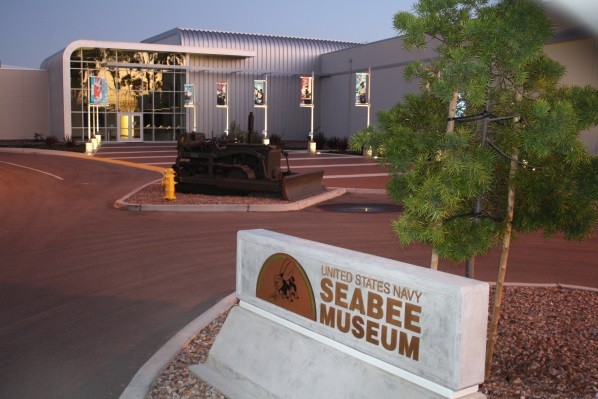 The U.S. Navy Seabee Museum moved into its new state-of-the-art facility in 2011 and the staff is currently working to install new exhibits. With temperature and humidity controls, the complete collection will be preserved and maintained by the museum's professional staff. Best of all, the museum is more easily accessible to the general public, with no restrictions, for their education and enjoyment.