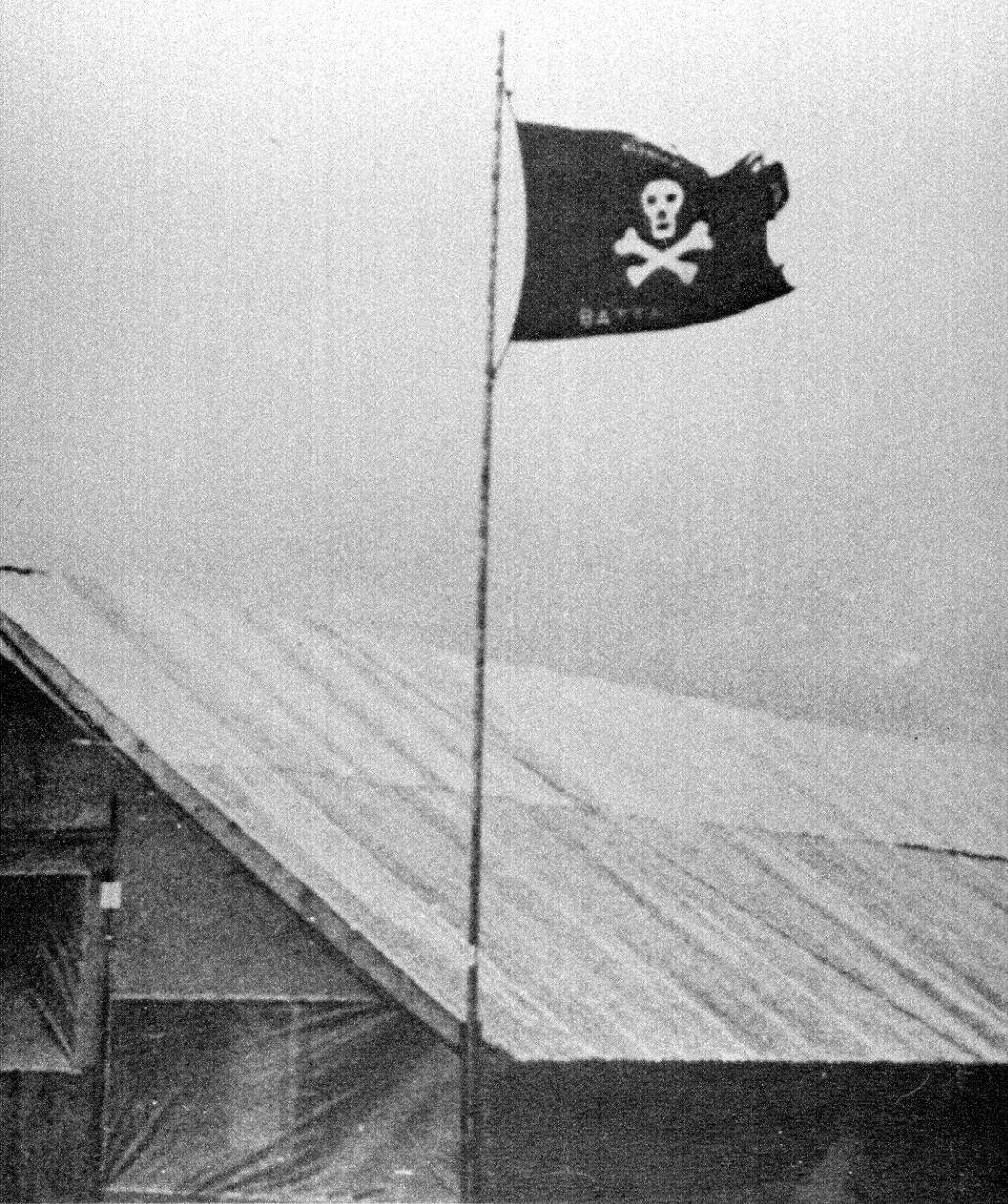 In addition to the regular Seabee battalions that served in Vietnam there was one other rather ephemeral unit, aptly known as the “Ghost Battalion,” whose personnel proudly flew the Jolly Roger as their flag.

During the summer of 1967 an urgent need for an airfield at Quang Tri materialized because North Vietnamese guns were within range of the airstrip at Dong Ha and were routinely subjecting the facilities there to heavy bombardment. It was decided to construct a new airfield just north of the city of Quang Tri, 10 miles south of Dong Ha and outside the range of North Vietnamese guns. The airfield was to be 3,500 feet long and capable of handling C-130 transport planes. A 90,000 square yard helicopter pad and a cantonment for 500 men were also planned. The project was top secret and the location was simply identified as site “X.” This was a top-priority mission with a lot of high-level interest. The Navy was tasked with completing the assignment in no more than 45 days and it naturally fell to the Seabees to see that this was done. No single battalion, however, would be assigned to the project. Instead Quang Tri construction was placed under the operational control of the 32nd Naval Construction Regiment and detachments of officers, men, and equipment from Naval Mobile Construction Battalions (NMCBs) 1, 3, 4, 7, 10, 11, 74, 121, and 133 worked together to carry out the project. CDR Richard L. Foley, CEC, USN, the Commanding Officer of NMCB-3, was designated the Officer in Charge of Construction and LCDR William N. Ahrens, CEC, USN, the Executive Officer of NMCB-121, served as Assistant Officer in Charge of Construction.

When the first detachments gathered together at site “X” on 15 September 1967, they dubbed themselves the "Ghost Battalion" and shortly thereafter began flying as their ensign a black flag with a white skull and crossbones and the words “Ghost Battalion.” When the "Ghost Battalion" Seabees arrived, site “X” consisted only of open meadows. This, however, soon changed; work commenced immediately even though driving monsoon rains lashed the area. By 17 September the Seabees had 90 percent of the temporary helicopter pad finished and the first helicopters landed, one of which carried CAPT James M. Hill, Jr., CEC, USN, the commander of the 32nd Regiment.

A major problem was the necessity to remove 11,000 graves from the airfield site. Two U.S. Army and one Royal Australian Army officer were flown in to assist with the problem. The grave removal effort involved the use of hundreds of Vietnamese laborers and only one week was allowed for it.

Two days after project start-up, the Seabees had already cleared 2,500 feet of airstrip, located the main drainage, and began cutting ditches and installing culverts. It was about this time that the “Skull and Crossbones” flag was first run up. The galley was laid out and barrack construction also began. Despite the rain and having only C-rations to eat, the Seabees remained in high spirits.

The Seabees' efforts did not go unopposed by the North Vietnamese and Viet Cong. Snipers began firing as soon as the Seabees arrived and the Marines that were sent along to provide security were kept busy. By 22 September cement began arriving in quantity and the first 2,500 feet of the runway was nearly to finish grade. Soil cementing could commence as soon as Pulva- mixers, piping, and pumps arrived.

On 23 September General Westmoreland dropped in for a visit, an indication of the high priority placed on the new air facility. On the following day the first 1,000 feet of runway was ready for soil cementing and 50 percent of the permanent helicopter pad was cleared. On the next day a mortar tower was delivered by a flying-crane helicopter. The Viet Cong hit site “X” that night with a mortar attack, probably because they saw what the crane helicopter was delivering. Site “X” received between fifty and sixty 60 mm and 81 mm mortar rounds. Ten Marines were wounded; however, there were no Seabee casualties. The mortar tower was erected the following day.

By 27 September the base was beginning to take shape and the enemy, obviously concerned, made a second mortar attack.The thirty incoming rounds hit around the messing area wounding 30 Marines and 2 Seabees. By this point the runway had been graded and soil cementing began the next day. Construction continued on the new base until, by 20 October, the whole 3,500 foot runway was complete. One-third of the taxiway and one-half of the parking apron, however, remained to be completed.

On 23 October the first C-130 transport landed on the field and the pilot reported that the runway was the smoothest expeditionary runway he had ever landed on. Finally, on 30 October the helicopter pad was completed and Squadron HMM 163 landed in full strength. The mission was completed in 38 days, 9 days earlier than scheduled, and the men of the "Ghost Battalion" returned to their parent units. Future construction at site "X" became the responsibility of NMCB-10.

The airfield at Quang Tri was later expanded into a much larger installation and three years later was used by the South Vietnamese armed forces as the principal staging area for attacking North Vietnamese forces along the Ho Chi Minh Trail.