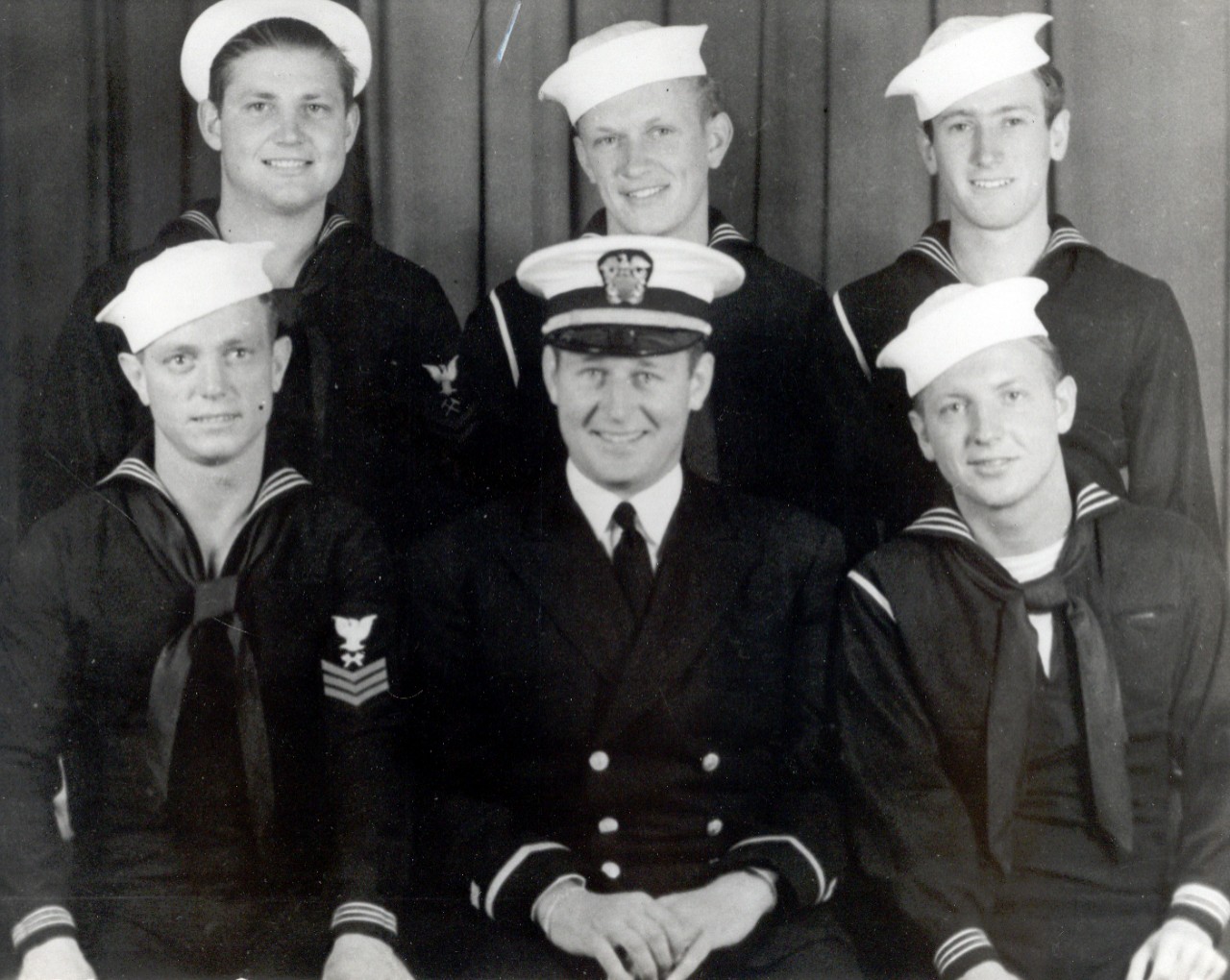 It is not widely known, but there were Civil Engineer Corps officers among the very first men to go ashore at Normandy on D-Day, 6 June 1944. These officers commanded Naval Combat Demolition Units which had the extremely hazardous mission of going ashore before the assault troops and blowing gaps in enemy beach obstacles. Failure to neutralize these beach obstacles would have turned the Normandy invasion into a disaster. The demolition units did their work under heavy enemy artillery, mortar, and small arms fire and consequently they suffered very heavy casualties. One of the Civil Engineer Corps officers who went ashore on that cold, wet morning of 6 June was ENS Lawrence S. Karnowski, the Officer in Charge of Naval Combat Demolition Unit 45. His performance that day went far beyond anything that could be expected of a man in combat and earned him the Navy's second highest award, the Navy Cross, “for extraordinary heroism.” This is his story.

Lawrence Karnowski was born on 1 October 1916 in Tampa, Kansas. After graduating from high school, he attended the University of Kansas where he graduated with a degree in civil engineering. He subsequently worked for the Army Corps of Engineers as a civilian engineer.

Karnowski joined the Navy in June 1943 and received a commission in the Civil Engineer Corps Reserve. After completing orientation and training at Camp Peary, Virginia, he volunteered for the naval demolition units being formed to go in ahead of landing troops and destroy beach obstacles. On 2 November 1943 ENS Karnowski left Camp Peary to begin demolition unit training at Fort Pierce, Florida.

The mission of the demolition units that operated in the Atlantic Theater was unique because these units performed assault demolition in contrast to the Pacific Theater units which performed reconnaissance and pre-assault demolition. The training facility was established at Fort Pierce, Florida in June 1943 and the first class arrived and assembled for training at the beginning of July. The personnel were drawn from the Naval Construction Battalions, and the bomb and mine disposal schools, because it was felt that such personnel would already be familiar with explosives and basic demolition. The site chosen for training offered natural swimming beaches and temperatures that allowed year-round swimming. However, the physical conditions in which the men lived and the training itself were very arduous.

After his arrival at Fort Pierce, ENS Karnowski was made Officer in Charge of newly-formed Naval Combat Demolition Unit 45.  The unit consisted of Karnowski and five enlisted men: two Seabees, a Carpenter's Mate 1st Class and a Metalsmith 2nd Class, and three Seamen 2nd Class.

Following demolition training, NCDU-45 shipped over to England and was attached to the 6th Beach Battalion of the 11th Amphibious Force to prepare for the Allied invasion of France, planned for the summer of 1944. Further intensive training followed at the Assault Training Center, Willacombe, England. During this period Allied reconnaissance ascertained that the enemy had greatly increased the number of obstacles on the target beaches. It was clear that additional numbers of trained men would be needed to reinforce the NCDUs, if the beaches were to be cleared. Therefore, on 26 April a corporal and four privates from the Army combat engineers were assigned to NCDU-45 and trained to perform the demolition mission. On 5 May an additional five sailors from a general personnel pool were also assigned to NCDU-45, bringing it to a total strength of one officer and seventeen men.     NCDU-45 was subsequently assigned to Force “0” which would assault "Omaha" beach during the Normandy landings.

On 1 June 1944 NCDU-45, an Army demolition unit of 26 men, and three M4 "General Sherman" tanks (one with a dozer blade), all boarded LCT(A) 2425. The Army and Navy demolitions teams were known collectively as Boat Team #10 because they would go ashore aboard LCM 10 which was being towed by LCT(A) 2425. The LCM was loaded with the boat team's explosives and equipment. The tanks were placed forward on reinforced ramps on the LCT so that their 75-mm guns could provide covering fire as it approached the beach. On that same date, ENS Karnowski and his fellow officers in charge were taken aboard the USS ANSON for their first and only briefing before the attack. The briefing was conducted by LCDR Joseph H. Gibbons, USNR, the commanding officer of Group 2, Force “0,” and RADM John L. Hall, Jr., USN. The latter assured the assembled officers that the pre-invasion bombardment would be so intense that "not a living soul" would be left on the beach.

The assault plan called for the NCDUs and Army demolition units to land at H-hour plus 3 minutes and each clear an initial 50 yard gap in the beach obstacles. As a preliminary, an air and sea bombardment would begin 24 hours before the assault and continue right up to H-hour at 0630. At H-hour plus 15 minutes, the 32 tanks on the LCTs would land and provide fire against specific obstacles. The tide was to be at low ebb and just beginning to rise. The plan would have worked well; however, it made no provision for bad weather.

Upon return to the LCTs, the officers in charge briefed their men; however, no one was led to believe that the operation would be easy. In light of subsequent events, this proved a wise decision. On 4 June the LCTs with the loaded LCMs in tow and the NCDUs and Army units aboard started across the channel. However, the good weather of the previous 24 hours deteriorated so rapidly that, at midnight on 5 June, the Supreme Commander ordered the operation postponed for 24 hours. All vessels had to return through the rough seas to their starting points and await further orders. This forced the personnel aboard the LCTs to suffer an extremely wet and cold ride many hours long. The men crowded aboard the LCTs were forced to sleep on decks which were frequently awash and they had insufficient rations. Conditions were  so bad aboard LCT(A) 2425 that the personnel had to drink contaminated water purified with chloride tablets. When the LCT reached Portsmouth on the afternoon of 5 June, the men were informed that D-day had been moved to 0620 on 6 June, and that they would remain aboard the LCT until it sailed for France again.

Things went little better during the second passage to France. The sea was still extremely rough and conditions aboard the LCTs remain severe. In some instances, the towed LCMs broke loose from the LCTs and were lost, while in other instances, the LCTs broke down and the demolition units had to board the LCMs which proceeded under their own power. This was done without food or protection from the spray and sea which rendered the personnel cold, wet, and seasick -- not in the best condition to carry out their mission. Nevertheless, despite these difficulties, the demolition units made an orderly departure from the transport area and the first wave went ashore from 0633 to 0635.

Joint Army-Navy Boat Team #10 transferred from LCT(A) 2425 to LCM 10 at 0230 hours. LCM 10 then joined with LCM 15 and 16 and proceeded toward shore. At 0545 the men sighted "Omaha" beach and at 0610 beach sector "Easy Red" and the unit's assigned gap-area. The LCM touched shore and dropped its ramp at exactly 0625 and Boat Team #10 disembarked and unloaded two rubber boats, one of which was allowed to drift down the beach and the other was moored to a piling. Unfortunately for demolition personnel, the naval gun fire, rocket barrages, and aerial saturation bombardment had not destroyed the German defensive positions above   the beach line. Although the Germans did not fire during the approach of the LCM, as soon as its ramp dropped they opened a withering fire. Enemy fire was constant and heavy, consisting of machine guns and 88mm cannons. The three tanks disembarked at 0640, shelling the hills as they came ashore, and the LCM pulled out to sea and safety. The tanks took positions to the left and right of where the gap would be blown in the obstacles and continued shelling and using their machine guns in an attempt to set off German teller mines. Despite the heavy enemy fire, the Army and Navy demolition teams proceeded toward their objectives. The demolition personnel had to blow gaps in three bands of obstacles with three rows of obstacles in each band to open the beach for the landing troops waiting offshore. Under constant, severe enemy fire  they succeeded in destroying the obstacles. Charges were placed and the first was detonated at 0650, the second at 0700, and the third at 0710. A fourth charge was set but not detonated because assault infantry was already landing and taking cover behind the targeted beach obstacles.

Constantly exposed to heavy artillery and small arms fire, ENS Karnowski coolly and skillfully directed the clearing of the fifty-yard gap in the beach obstacles. In the process, he saw a wounded member of his unit about to drown in the rising tide and, at great personal risk to himself, rescued the man. ENS Karnowski returned alone to the demolition work, repeatedly placing charges to widen the gap in the obstacles. The tide was rapidly rising and the surviving demolition personnel found themselves swimming rapidly in the deepening water to place charges on obstacles not yet cleared. These were finally cleared up to the dune line, but the gap was not widened until the next day when the remaining men of NCBU-45 cleared mines and obstacles on the left flank. When hazardous tidal conditions prevented further demolition, ENS Karnowski remained on the beach in complete disregard for his personal safety to aid the wounded and evacuate casualties. The citation in which the President later awarded him the Navy Cross, describes Karnowski as "a bold and resolute leader, [who) by his indomitable aggressiveness, self-sacrificing conduct, and unfailing devotion to duty, upheld the highest traditions of the United States Naval Service." Karnowski was the first of only two Civil Engineer Corps officers to win the Navy Cross in World War II. He was not, however, the only hero that day, one of his petty officers, a Seabee Metalsmith 1st Class, named Lester J. Meyers, won the Silver Star for similar acts of heroism.

Following the war, Karnowski returned to civilian employment with the Corps of Engineers, after a brief time with a private engineering firm. He also remained active in the Civil Engineer Corps Reserve and was called to active duty from 1951 to 1953 for the Korean War. After leaving active service, he went to work for the Deputy Public Works Officer, Eleventh Naval District, and subsequently found himself an employee of the Bureau of Yards and Docks, at the Southwest Division. He continued his employment with the Bureau of Yards and Docks and the Naval Facilities Engineering Command and was awarded the Southeast Asia Civilian Service Award for on-site work in Thailand during the Vietnam conflict. He also continued his service in the Civil Engineer Corps Reserve, rising to the rank of commander.

Nevertheless, no matter what followed, his actions on that awful morning of 6 June 1944 on “Omaha” beach should never be forgotten by the Civil Engineer Corps -- for Lawrence S. Karnowski is truly one of the heroes of the corps.