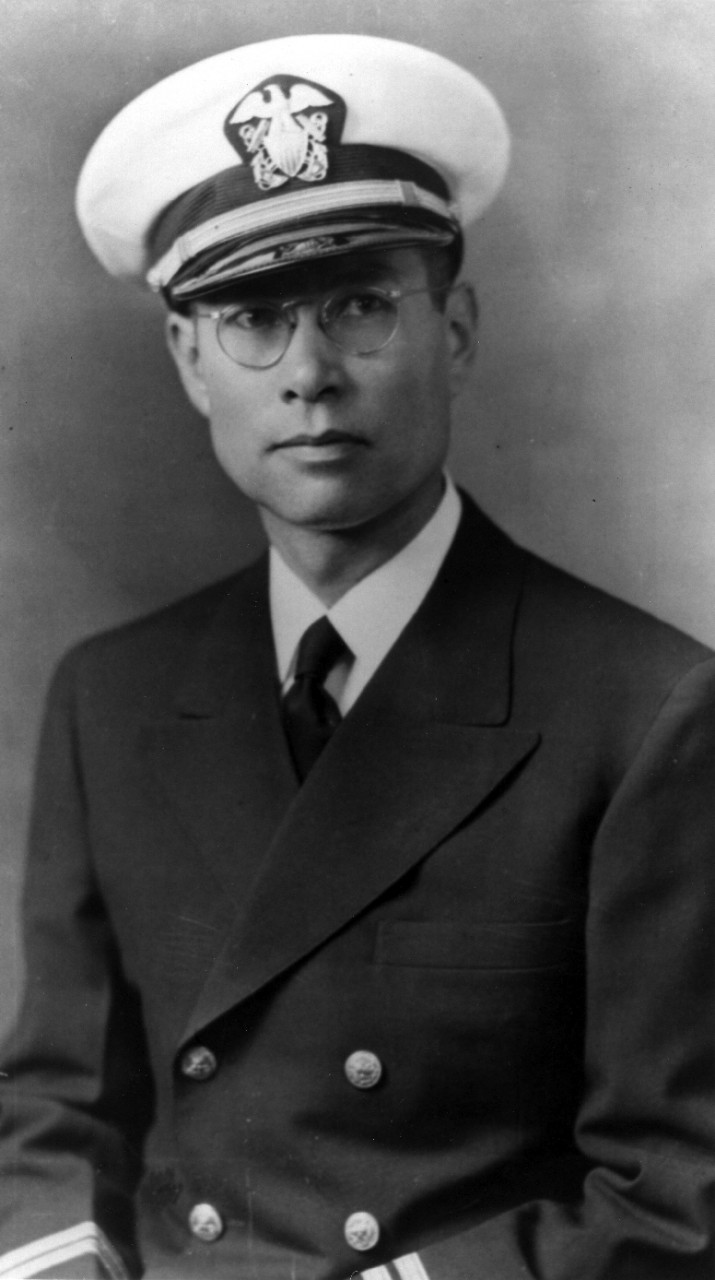 Although black enlisted personnel served in the U.S. Navy, often in integrated units, during every major war in American history, the Navy had no black commissioned officers until World War II. At the beginning of that conflict, the U.S. War Commission encouraged the armed services to provide equal career opportunities to black Americans. One logical step in implementing this goal was the commissioning of black officers.

In 1943 the Navy began training qualified blacks for officer positions; and in March 1944 the first group of blacks, the "Golden Thirteen,'' graduated from Officer Candidate School at Great Lakes, Illinois, and received commissions as line officers. A few months later the Navy initiated a program for the selection of black staff corps officers. One of the first to be chosen was Dr. Edward Swain Hope, who was commissioned a Lieutenant in the Civil Engineer Corps Reserve in May 1944.   Dr. Hope was not only the first black Civil Engineer Corps officer, but, upon promotion to Lieutenant Commander, also became the highest ranking black naval officer to serve in World War II.

Edward Swain Hope was born the son of Dr. John Hope and Lugenia Burns Hope on 28 August 1901 in Atlanta, Georgia. After completing his early education, he received an A.B. in science from Morehouse College in Atlanta in 1923, and a B.S. and M.S. in civil engineering from the Massachusetts Institute of Technology in 1925 and 1927. During summer vacations Hope gained practical experience working as a carpenter's apprentice and mechanic's helper, finally ending up as a journeyman mechanic. During the summer before undertaking his master's project, he carried out a survey for a water power project for the Grenfell Medical Mission in  Newfoundland. This survey formed the basis of his M.S. project. Following graduation from the Massachusetts Institute of Technology, Hope worked on highway construction for a year on  Long Island, New York, and then spent three years in Brazil working on hydroelectric development for the American Foreign Power Company. In 1930 the depression ended this employment and Hope returned to the U.S. and became Superintendent of Buildings and Grounds at Howard University in 1932. From 1939 to 1942 he attended the Teachers College of Columbia University where he earned a Ed.D. in personnel administration.

In 1944 Dr. Hope, his wife and two children, were living comfortably at Howard University. At 42, he was already over the draft age, had a good job, and, because of it, had been declared essential to the national health and welfare. Nevertheless, one night he read that the Navy planned to give staff officer commissions to blacks, two of which would be in the Civil Engineer Corps. In his youth, Hope had been entranced by the thought of naval service. He had attended  a lecture given by a Navy lieutenant on the cruise of President Theodore Roosevelt's Great White Fleet and still remembered a visit, in the company of an uncle, to a CAPT Small in Beaufort, South Carolina, during which he had held the medal that Small had won for taking the CSS PLANTER during the Civil War.

Inspired by such thoughts and realizing that the Navy would probably have trouble finding qualified black civil engineers, Dr. Hope volunteered for naval service. After passing the physical with flying colors, Hope was sworn in as a lieutenant, the lowest grade that a man his age could hold.

Following training at Camp Endicott in Davisville, Rhode Island, LT Hope was assigned to the Manana Barracks at Pearl Harbor, Hawaii, as Public Works Officer. Manana Barracks primarily housed black sailors who served as stevedores on the Navy docks, although both black and white sailors were assigned to LT Hope in the Public Works division. LT Hope's duties as Public Works Officer were not much different than those he had performed at Howard University so he quickly adjusted to his new job.

In December 1945 LT Hope flew to Okinawa where he was the first black naval officer to serve as a member of a general court-martial board.  During this trip he had an opportunity to see areas that had only recently been forward battle areas. In January 1946 LT Hope was transferred from Manana Barracks to the Navy Pacific University where he was offered a promotion and transportation of his family to Hawaii, if he would stay in the Navy for at least another six months. He accepted the offer and soon became Director of Instruction at the university. His family joined him and he was promoted to lieutenant commander. Some months later, the Navy closed the university and LCDR Hope was reassigned as Assistant Public Works Officer at Pearl Harbor, and was subsequently returned to the continental U.S. with his family for separation.

Just as LDCR Hope was about to sign his separation papers in Anacostia, Maryland, he was ordered to report to Secretary of the Navy James Forrestal, who asked him whether he might like to remain in the Navy. LCDR Hope, however, was determined to return to civilian life, feeling that 47 years of age was rather late to begin a career in the regular Navy. Nevertheless, Hope informed Secretary Forrestal that he hoped younger blacks would seek careers as Navy officers and that he would be willing to do whatever he could to encourage this. As a result of this offer, LDCR Hope was sent on a speaking tour of black colleges to "show the uniform" and make own the benefits of a career as a Navy officer.

LCDR Hope was finally released from active duty in February 1947. He returned to Howard University where he was appointed professor of civil engineering. He remained active in the Naval Reserve until the late 1950s when he was appointed Chairman of the Civil Engineering Department of the American University of Beirut in Lebanon.