Vietnam: The Civil Engineer Corps puts the construction in!! 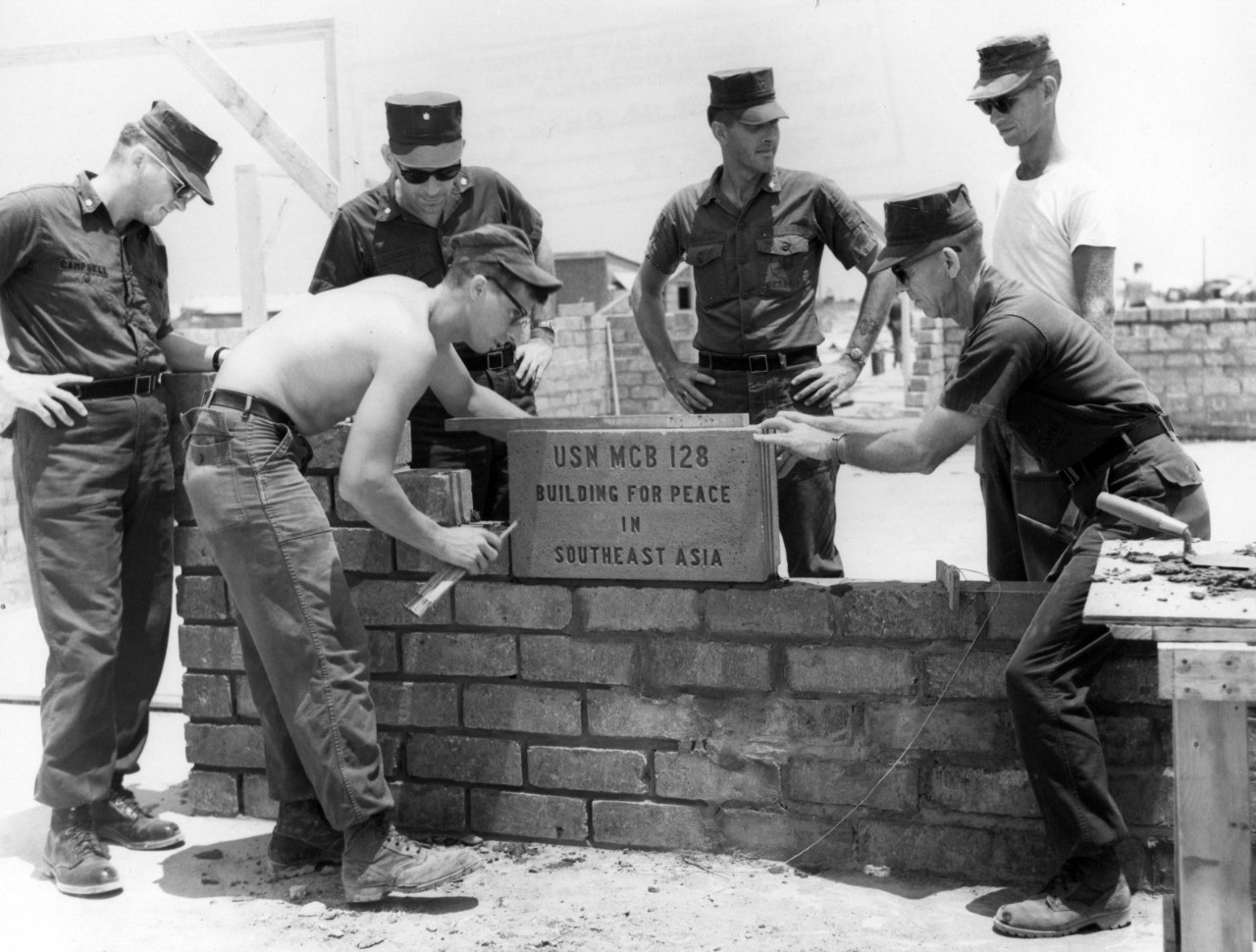 The Bureau of Yards and Docks (redesignated the Naval Facilities Engineering Command on 1 May 1966) played a major role in the Vietnam War. One reason for this was a Defense Department memorandum of 27 February 1956 which assigned the Navy total responsibility for all defense construction in Thailand, Cambodia, Laos, Vietnam, and the Philippines. As a result, in 1962 the Bureau of Yards and Docks was designated the sole construction agent for contract construction in Southeast Asia. In addition to its own Navy construction, the Bureau was responsible for that of the Army and Air Force as well.

In the early 1960s Officer in Charge of Construction offices were opened in Thailand and Vietnam and the first program, involving the construction of military airfields, began. The initial construction was done by contractors under the auspices of the Military Assistance Program and was for Vietnamese armed forces facilities.   During 1964 the construction rate averaged $1 million per month. The following year saw a dramatic increase in U.S. participation in the war which led to an increase in the construction of facilities to support the combatants in the widening conflict. Adequate infrastructure and communications facilities were lacking in Vietnam. However, the monsoons and other climatic extremes, and the long lead times necessary for the procurement of equipment and materials made construction very difficult in Vietnam.

A large contractor consortium, RMK-BRJ, and many smaller contractors, working under fixed price, cost plus fixed fee, and finally cost plus award fee contracts, carried out most of the construction for the U.S. and Vietnamese armed forces. The tremendous increase in  construction requirements that began in 1965 caused major management problems which led to the development of a management tool known as Level of Effort. Under the Level of Effort system, a work effort was mounted which at its peak involved 50,000 men, $150 million of equipment, and $200 million of material.

Between 1962 and 1972, RMK-BRJ built 15 jet-capable airfields (8 of which became major bases), and numerous smaller airstrips, 7 deep-draft ports, hundreds of lesser ports, thousands of feet of small craft berthing facilities, more than 3 million barrels of petroleum, oil and lubricant storage facilities, cantonments for more than 350,000 troops, hospitals with a total capacity of 8,000 beds, 56 million square feet of covered and opened storage areas, 2.5 million cubic feet of cold storage areas, over 1,000 kilometers of improved streets, roads and highways, 8,300 lineal meters of new bridges, and over fifty miles of railroad lines. During the lifetime of the single massive construction contract, $1.9 billion of work was completed. The Naval Facilities Engineering Command finally closed out the contract in July 1972, only three months before it closed down the office of the Officer in Charge of Construction, Vietnam. .It was through the unceasing labor of dedicated Civil Engineer Corps officers that this huge construction effort was carried out.   Still, to this day, it represents a prodigious achievement.

As we saw at Dong Xoai, Civil Engineer Corps officers were present in Southeast Asia in other than a contract management capacity. Although most of the construction in Vietnam was done by civilian contractors, a significant portion was done by military engineer force personnel.

Although the volume of work was less great, the conditions under which it was accomplished and its importance make the military construction effort noteworthy. These construction units comprised Marine, Army, and Air Force engineer units, and, of course, the Navy's Seabees.

The Seabees were among the earliest military engineers involved in Vietnam. They built refugee camps in the 1950s and sent in Seabee Teams, like the ill-fated 1104, in the early 1960s. In 1965 the steadily increasing insurgency of the Viet Cong made the large-scale commitment of U.S. troops a necessity, if the Republic of Vietnam were to survive. Although Seabee teams had been active in Vietnam since 1963, it was only in 1965 that battalion-size units arrived. The first Seabee battalion arrived in Vietnam on 7 May 1965 to build an expeditionary airfield for the Marines at Chu Lai. Others quickly followed. The Naval Construction Force rapidly expanded from 10 under-strength battalions to 21 full-strength battalions. During the war, the total Seabee community grew from 9,400 in mid-1965 to more than 25,000 in 1968 and 1969. Seabee strength in Vietnam peaked in 1968 when there were 12 battalions in country, organized in two regiments and one brigade. The Seabees were concentrated in the north where most of the hostilities were taking place. All the battalions had their headquarters and most of their personnel in the north; and nearly half the battalions were located in the northern part of the I Corps Area, near the border with North Vietnam.

Seabee accomplishments in Vietnam were impressive; they built roads, airfields, cantonments, hospitals, storage facilities, bunkers, and other facilities critically needed to support the combatant forces. The mobile "search and destroy" strategy adopted by the U.S. during the first years of the conflict shaped the twofold mission of the Seabees: Seabee Teams and detachments built facilities in remote locations while whole battalions built large coastal strongholds in the I Corps Tactical Zone.

Important to the effectiveness of the Seabee operations in Vietnam was the harmonious relationship, based upon mutual respect, that existed between Seabees and Marines. This relationship continued a World War II tradition and was extremely important because the Seabees in Vietnam carried on much of their construction effort in direct support of Marine combat forces.

Seabee strength in Vietnam peaked at around 12,000 shortly after the beginning of the Tet Offensive. While continuing to labor in the north, building city-like cantonments and upgrading previously-built facilities, the Seabees more and more turned their efforts to the south. After responsibility for conducting the war was turned over to the South Vietnamese, U.S. military operations in the north were significantly reduced and the Seabees began working to prepare the South Vietnamese for the ultimate withdrawal of all U.S. forces.

In 1970 Seabee involvement in Vietnam drew to a close and the withdrawal of the remaining  units began. The Seabees had made a lasting contribution to the people of South Vietnam. In a war where winning the hearts and minds of the people was an important part of the total effort, Seabees construction skills and medical assistance proved powerful weapons in the "civic action" war. The recitation of events and quoting of statistics fail to reveal the true nature of the  Seabees' contribution during the Vietnam war years. While it is true they supported the Marines at Chu Lai, Khe Sanh and Hue, and struggled with the logistics problems of the Mekong Delta, it is also true that the Seabees built roads to provide access to markets, supplied fresh water to countless villages and towns, provided medical treatment to thousands of villagers, and opened new opportunities and hope through Seabee-built schools, hospitals, utility systems, and other community-support facilities. In Vietnam, Seabees worked alongside the Vietnamese and taught them construction skills, helping them to help themselves and proving that the Seabees were really "builders for peace."