The Birth of the Civil Engineer Corps 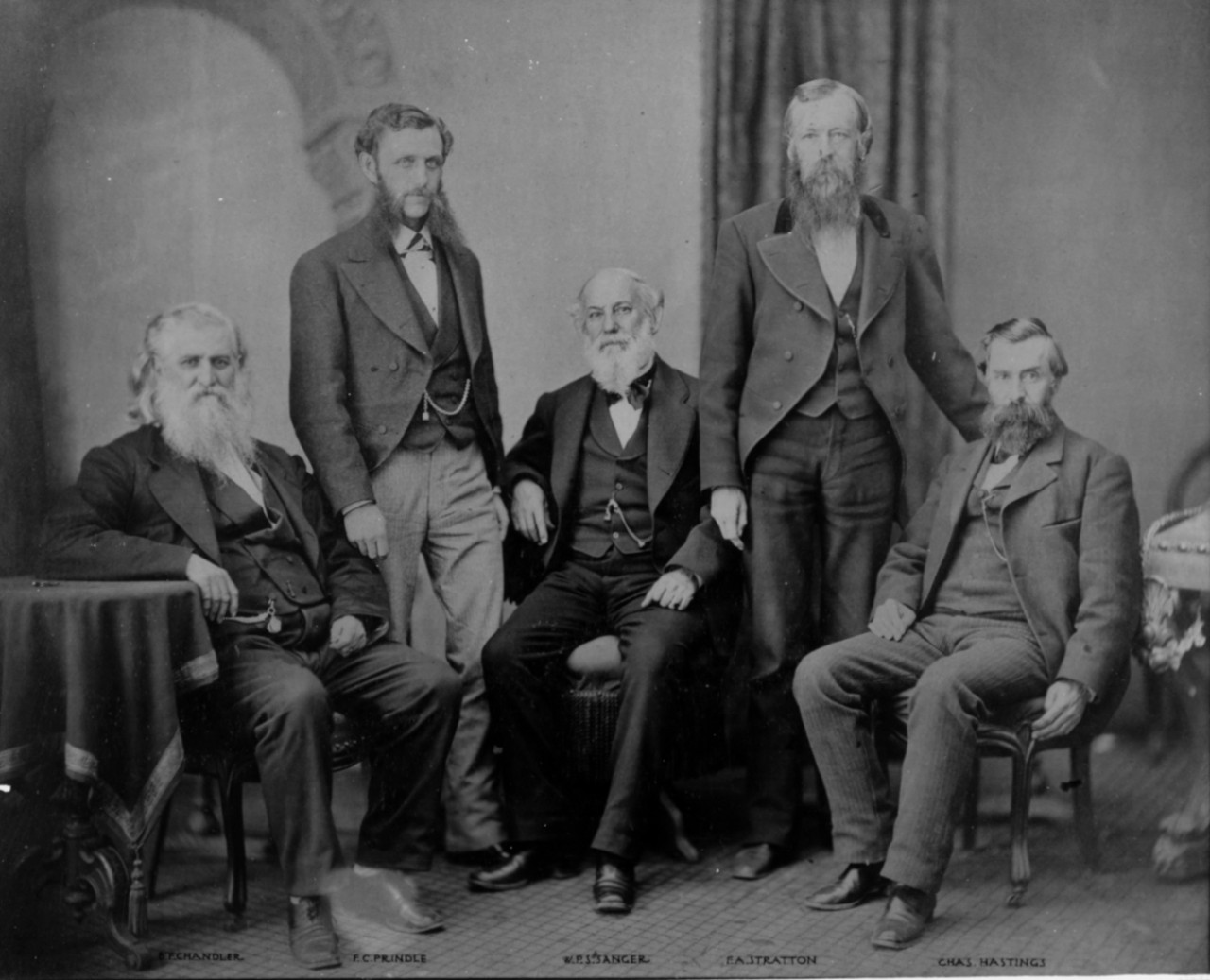 Whatever the significance of 2 March 1867, there is no doubt that prior to that date Navy civil engineers were not commissioned officers and did not comprise a staff corps. They were simply civil servants employed at the Bureau of Yards and Docks and at the various navy yards under its cognizance. Instead of "civil servant," the contemporary term “civil officer” was most often used to describe such civilian employees during this epoch. Nevertheless, this term is ambiguous to some degree. In the 1860s and 1870s, it was synonymous with the term “civil servant;” however, during much of the 19th century, the Navy also used the term “civil officer” to mean a commissioned officer of a staff corps. This usage was perfectly consistent, since line officers during this period considered staff officers to be nothing more than noncombatant civilian specialists in uniform, despite the fact that staff officers held Presidential commissions just as line officers did. The first Navy civil engineers were few in number; there were only seven on 7 March 1867. Premier among them was William P. S. Sanger, whom, as we learned earlier, the Board of Navy Commissioners originally hired as a staff civil engineer in 1836.

The first indication that the Navy was considering making its civil engineers into commissioned officers appeared in the Secretary of the Navy's report of 5 December 1855. In it, Secretary of the Navy James C. Dobbin said, "After much reflection and attentive observation of the practical workings of the present system, I am very favorably inclined to the plan suggested by a predecessor, of establishing a distinct corps in the Navy, whose duty shall be confined to hydrography, ordnance, civil engineering, and other scientific duties."

Despite Secretary Dobbin's being “favorably inclined,” there was no change in the status of civil engineers until 1867.

On 2 March 1867 -- the date that would one day be celebrated as the birth-date of the Civil Engineer Corps -- the Thirty-Ninth Congress devoted exactly thirty-one words to civil engineers (and naval storekeepers) in an appropriations act: “Provided that civil engineers and Naval storekeepers, when required at any of the Navy yards, shall be appointed by the President by and with the advice and consent of the Senate,....” These few words do not make it clear that the Civil Engineer Corps carne into being on the date of the 1867 act. The act says nothing about civil engineers being commissioned nor does it mention the establishment of a new staff corps.

Did Congress intend to give civil engineers commissioned status by making their position a presidential appointment? Unfortunately, Congress' intent is not clear -- the act is simply too brief and vague for this conclusion to be drawn. Can the status of naval storekeepers, who are included in the act, provide a clue to Congress' intent? Unfortunately, no. Depending upon the situation, both civilian employees and commissioned officers could hold the appointment of naval storekeeper.

For almost two years after the passage of the act of 2 March 1867, there was nothing to indicate that the status of civil engineers had changed. The Navy Register of 1 January 1868, a publication which lists all commissioned and warrant officers, did not list civil engineers. The Navy also continued to pay civil engineers from funds appropriated for its civil establishment.

The following year, however, brought a change. The Navy Register of 1 January 1869, listed five civil engineers in a section entitled “Naval Constructors and Civil Engineers” (naval constructors had been commissioned officers since 13 March 1863 and constituted a staff corps).

Inexplicably, the register does not list William Sanger among the civil engineers, although he was most certainly a Navy civil engineer in 1869. Sanger first appears in the Register of 1 January 1873, and 3 March 1867, is given as his date of commission.

The "commission" referred to in the register must be a military commission and not simply a civilian appointment because only military officers are supposed to appear in the registers and  the same terminology is used in the section dealing with line officers. Congress changed the pay status of civil engineers the following year. The third section of the act of 15 July 1870 (Section 1556, Revised Statutes), which fixed the pay of Navy officers on the active list, included civil engineers in its provisions. Henceforth, the Navy paid civil engineers out of the military personnel appropriation. Both the Navy and Treasury Departments clearly recognized civil engineers to be commissioned officers. Their pay was fixed on the longevity system like that of other officers and deductions were made for the benefit of the Navy Hospital Fund. Under the Law of 1799 only "the officers, seamen, and marines of the Navy of the United States" were liable for this levy.

The Register of 1 January 1871 reflected this change in status; there was now a listing for civil engineers in the officers' pay table. Thus, civil engineers were appointed by the President, listed in the Navy Register, and paid as commissioned officers. The only thing that civil engineers lacked was rank.

Congress in an act of 27 February 1877 further clarified the status of civil engineers. In Sections 1473 through 1479 of the Revised Statutes, Congress discusses the relative rank assigned to officers of the Medical Corps, Pay Corps, Engineer Corps, Naval Constructors, Civil Engineers, and Chaplains. (Section 1478 dealing with civil engineers merely repeats the words of the act of 1 January 1871.) Next follows an emendation to Section 1480 which states: “The grades established in the six preceding sections for the staff corps of the Navy shall be filled by appointment from the highest members in each staff corps.” Since one of these ''six preceding sections" is devoted to civil engineers, Congress clearly indicated that it considered civil engineers to be commissioned officers comprising a staff corps.

In 1878, however, the position of Navy civil engineers was completely reversed as a result of a dispute over the dismissal of one of their number. Attorney General Charles Devens in an opinion of 18 November 1878 ruled, “The appointment [of civil engineers] is local in its character. And although under the act of 3 March 1871, the President was given discretionary power to confer relative rank upon civil engineers, this power has never been exercised, and they have no rank by which their relation to the officers or men in the Navy can be determined: Held, accordingly; (1) that civil engineers (in the absence of any action by the President conferring  upon them relative rank) are not to be considered Naval officers, but civil officers....”

This ruling, drastic as it might seem, did not appear to affect the status of civil engineers in the Navy.  Civil engineers appear in the Navy Registers of 1 July 1878, 1 January 1879, and 1 January 1880 without any indication that their status as officers was altered.

On 12 April 1881 Attorney General MacVeagh, taking into account the relevant acts and amended statutes, reversed the decision of his predecessor and further stated, “...I am led to the conclusion that the civil engineers in the Naval service must be regarded as a staff corps of the Navy -- that they are officers in the Navy' possessing...defined relative rank as such with other officers in the Navy, and are not merely 'civil officers' connected with the Navy.”

The petitioning civil engineers further asked whether they were entitled to full retirement rights as naval officers. Once again, the Attorney General answered in the affirmative. Taking advantage of this second decision, William P. S. Sanger retired from the Navy on 15 October 1881 with the relative rank of captain. He had completed fifty-one years of service to the Navy, first as a civilian employee with Loammi Baldwin and later with the Navy Department and, finally, as a commissioned naval officer. Three other long-serving Navy civil engineers, Benjamin Chandler, Norman Stratton, and Calvin Brown, also chose to retire in October 1881

Whatever the initial status of civil engineers, the Navy did not grant them a uniform until 1881. Six months after the President fixed the relative rank of civil engineers, a uniform circular of 24 August 1881, specified that civil engineers were to wear a regulation staff officer's uniform with the rank stripes placed on a background of light-blue velvet cloth. In addition, the letters "C.E." were to be embroidered in silver old-English script on the shoulder straps and epaulets.

Why did the first Civil Engineer Corps officers have to suffer so many vicissitudes in order to win recognition for their new status? Part of the problem undoubtedly resulted from the line officer view of staff officers during the 19th century. As Charles O. Paullin in his History of Naval Administration says, "The line naturally resisted the assignment of rank to the staff. An institution that has developed traditions and a corporate life, and that enjoys a monopoly of rights and privileges, is wont to resist strenuously its being cheapened or made common either by undue additions to its membership or by extension of its privileges to others."

Nevertheless, the Navy and the line seem to have accepted civil engineers as commissioned officers fairly early on -- witness their appearance in the Navy Register of 1869.What probably contributed most to the difficulties experienced by Navy civil engineers in winning recognition   as commissioned officers was simply their small number and their widely scattered geographical distribution. Of the seven civil engineers in 1867, only Sanger was at the Bureau of Yard and Docks in Washington, DC; the rest were located, one each at various navy yards. Such a small, widely dispersed group did not command much influence in the Navy Department or Congress. Given these very real disadvantages, it is a tribute to the ability and professionalism of these first Navy civil engineers that it did not take them much longer to win recognition for themselves as regular commissioned officers of the Navy.

The struggle to achieve equality with officers of the line and other staff corps was by no means over in 1881. For though recognized as commissioned officers, Civil Engineer Corps officers still could not aspire to the office of Chief of the Bureau of Yards and Docks. Another seventeen years would pass before a Civil Engineer Corps officer became chief, in spite of the fact that the senior officers of the other staff corps were already chiefs of their respective bureaus.