Cubi Point: They Moved a Mountain 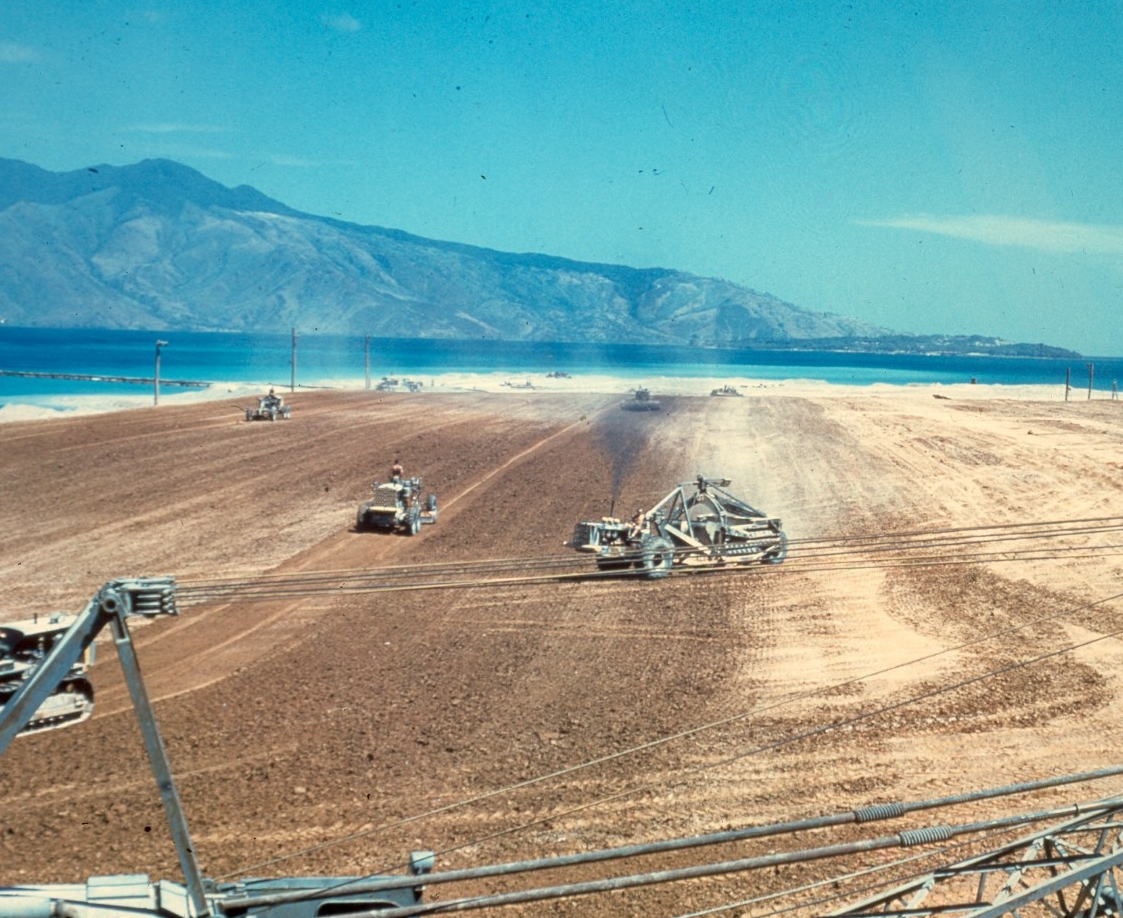 One of the most ambitious construction projects in the history of both the Civil Engineer Corps and Seabees came along four years after the latter had achieved regular Navy status: the construction of the Naval Air Station at Cubi Point, Subic Bay, in the Philippines. Even today, this tasking remains the single largest earth-moving project ever undertaken by the U.S. Navy.

The Korean War emphasized the need for a Naval Air Station located close to the trouble spots   of southwest Asia. ADM Arthur W. Radford, USN, then Commander in Chief of the Pacific Fleet and later Chief of Naval Operations, conceived the Cubi Point project. Cubi Point was originally a rugged, jungle-covered finger of land jutting out in a seaward direction from the eastern part of Subic Bay, located across the bay from the U.S. Naval Station, Subic Bay, about 50 miles north of Manila. It was selected as the most strategic and typhoon-sheltered location for the required combination of seaplane, land plane, and carrier operations that were deemed essential to the proposed Naval Air Station's mission. Cubi Point seemed a natural choice and subsequent history has affirmed the selection of this location. Although the location was excellent for operational reasons, constructing the air station involved enormous difficulties because of the jungle-covered, mountainous terrain of the site.

Despite the anticipated difficulties, the Cubi Point project was approved in 1951 and it was decided that Navy Seabees would carry out the project. During the summer of 1951 LCDR Frank C. Randall, CEC, USNR, Officer in Charge of Construction Battalion Detachment 1802 made an initial survey of the site. In September CDR James Douglas, CEC, USN, stepped ashore at Cubi Point; he was Commanding Officer of the Philippine Construction Regiment which was later redesignated the 30th Naval Construction Regiment. He was there to carry out the order to move a mountain and build an airstrip. Less than a month later, CDR Douglas was joined by LCDR Edwin I. Mosher, CEC, USNR, and the men of Naval Mobile Construction Battalion 3. Within a month of the arrival of NMCB-3, LCDR Herbert W. Whitney, CEC, USNR, and the Seabees of NMCB-5 arrived. Both battalions had only recently been established because of the Korean War emergency. Eventually, Seabees from NMCB-2, 5, 9, and 11, Det ABLE, and Construction Battalion Detachments 1802 and 1803 would join the men of NMCB-3. Together these units would carry out one of the largest earth-moving projects in the world.

The Seabees met problems peculiar to the climate and location as they arose. Before living quarters could be built or airstrip construction begun, the Seabees had to fight off monkeys, pythons, wild pigs, and carabaos. Soon after landing, the Seabees were told of the presence in the area of roving bands of Huks, Philippine communists. The natives told the Seabees that the Huks constantly raided and pillaged communities in the region and that the Americans were welcome as protection against the Huk depredations. Although Huks were known to be in the area until the latter part of 1953, there were no clashes with U.S. personnel.

Seabees from NMCB-3 and NMCB-5 surveyed the area which consisted of rocky, rolling terrain, covered by nearly impenetrable jungle, sloping down from the adjacent mountains. This was seemingly the last place in the world to build an air base. The first problem encountered involved moving the native fishing village of Banicain and its nearby cemetery to the community of Olongapo, five miles distant. Today, the site of the village lies under 45 feet of earth. During the initial start-up of the project, the Seabees of NMCB-3 began to clear roads and build a 600- man camp on a hill overlooking the proposed airstrip site.  They also began construction of a dam and reservoir to assure a water supply for both men and machines. Thereafter, both NMCB-3 and NMCB-5 worked on the airstrip, although NMCB-3 had overall supervision of that

aspect of the project. In the meantime, completion of the tent camp allowed the men to move ashore from a floating barracks where they had been temporarily berthed. This was soon followed by the assembly of a rock crusher by NMCB-5 and the beginning of quarry operations at Mancha Bluff. During the following months, the crusher and quarry would produce thousands of yards of crushed stone and riprap, the basic materials for the huge construction program.

During the rest of 1952, the Seabees worked at top speed to enlarge the camp facilities and arrange the disposition of ten thousands of cubic yards of coral spewed forth by the dredge NORFOLK. The coral was used for base course, hydraulic fill, and miscellaneous projects. Basically, the construction problem was one of creating land where none existed and leveling off the ragged foot of a jungle covered mountain. Hydraulic fill was taken directly from the floor of the ocean by a special machine from which extended a long hose containing a basket-shaped muzzle with rows of teeth that ground into the coral and rock bottom of the sea. This material was piled close to the beach and formed the foundation of the airstrip. By 10 May 1952 the Seabees had built and graded enough of the airstrip to enable the first small airplane to land on the subgrade.

In June 1952 NMCB-2 arrived from Port Hueneme and took over the Mount Maritan project, which required the removal of approximately 85 feet, totaling 212,000 cubic yards of rock, from the top of the mountain which obstructed the glide path approach to the airstrip. Next, the battalion had to dry-fill a swamp and erect a temporary petroleum tank farm there. Meanwhile the Seabees of NMCB-5 earned the sobriquet “Waterfront Gang” for their construction of piers, sheet-pile wharves, and bridges at Cubi Point.

After a year of work, the airstrip was a red scar across land once covered by jungle. The second dry, or construction, season marked the arrival of the Seabees of NMCB-9.After building their own tent area, the newcomers were assigned projects which included construction of a permanent water supply system for the Naval Station, Subic Bay, and the construction of the first three permanent buildings at Cubi Point: two enlisted barracks and a subsistence building. In addition, NMCB-9 erected a concrete block plant. In January 1953, NMCB-3 completed the asphaltic concrete mixing plant and, within a month, Seabees began paving the airstrip with hot mix from this plant. On 22 April 1953 ADM Radford had the distinction of being a passenger in the first aircraft to land on the paved airstrip.

NMCB-2 started another phase of the project during the first part of 1953 when it began construction of an ammunition area at Camayan Point. Additional Seabee units arrived, including Construction Battalion Detachment 1802, and contributed to the surveys of this ten- square mile area of rough terrain, heavily overgrown with jungle. Meanwhile a portion of NMCB-5's “Waterfront Gang” moved out to Camayan Point and began building an ammunition pier.

When the rainy season arrived, all the battalions returned to their home ports, except for NMCB-9 which remained to work on the most urgent projects. In October 1953 CAPT Madison Nichols, CEC, USN, became Commander of the 30th Regiment and NMCB-2, 3, 5, and 11 returned from homeport, and NMCB-9 returned to the U.S. During the following dry season, NMCB-2 built a road through the jungle between Cubi and Camayan Points and began construction of permanent water reservoirs and pipelines.  NMCB-11 continued work on the permanent buildings and NMCB-3 continued work on the runway, including grading, paving, runway drainage, and taxiway and parking area construction. NMCB-5 began work on another important project, the carrier wharf.

In June 1954 CAPT Stanley P. Zola, CEC, USN, relieved CAPT Nichols as regimental commander and was in turn relieved by CAPT Neil E. Kingsley, CEC, USN, in September. That October, NMCB-2 returned and relieved NMCB-5 and shortly thereafter NMCB-3 relieved NMCB-11. In January 1955 NMCB-5 and NMCB-9 returned simultaneously and the fourth construction  season began in earnest as work continued on existing projects. Work on the Cubi Point facilities continued into a fifth season and the Naval Air Station was finally officially commissioned on 25 July 1956. The Seabees witnessed the ceremony in which ADM Radford and Philippine    President Ramon Magsaysay were honored guests.

The five years of construction represented a tremendous man-hour and material investment on the part of the Civil Engineer Corps and Seabees. By May 1953, 3,000 Seabees were involved in the construction effort, each man averaging a 48-hour work week. The first two years of the project were the toughest; the Seabees lived in tents and fought heavy rains, insects, dust, mud, and a water shortage while they filled in sections of the bay up to 98 feet deep and excavated 23 million cubic yards of earth to build the airstrip. In the process, they built 15.3 miles of roads through the jungle, laid 36,000 tons of asphaltic concrete, used 1 million pounds of dynamite to quarry 1 million cubic yards of rock, and moved 15 million cubic yards of hydraulic fill. More than 1 million sacks of cement were used on the project before it was over. During the course of the project, cement, steel, heavy equipment, personnel and supplies had to be transported 7,000 miles from the U.S. to the Philippines. More than 1,000 pieces of equipment were shipped to the site during the five year construction period.An additional problem was the need for keeping on hand a spare parts supply worth approximately $1 million. The Seabees overcame this problem by building a warehouse, comparable in size to a six-story commercial retail store, which housed 75,000 different items.

The Cubi Point project represented a bold experiment in training and construction. The main problem was moving a mountain and building up land from the sea using only three modes of excavation: shovels and trucks, self-propelled scrapers, and tractor-drawn scrapers. The project cost $80 million not including the hidden costs such as housing and feeding personnel and taking care of their medical needs. The five-years of carving a Naval Air Station from the difficult Cubi Point site was very satisfying for the participants, not least because some civilian contractors described the job as “impossible to accomplish.” Each working day provided new challenges and headaches, but the Seabees doggedly pushed on, resolving the problems as they emerged and demonstrating anew the "Can Do" spirit.