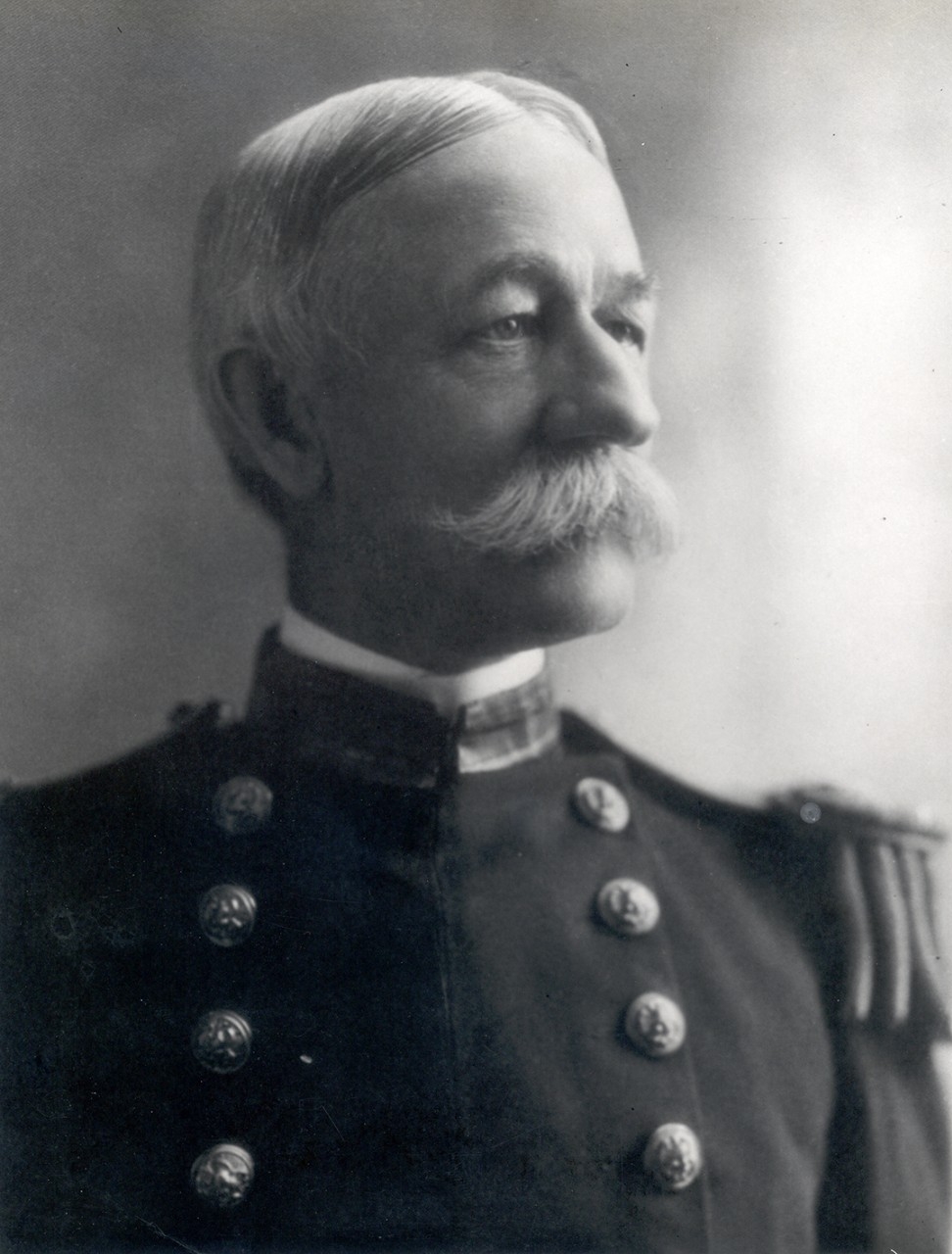 RADM Mordecai T. Endicott was not only the first Civil Engineer Corps officer to be appointed Chief of the Bureau of Yards and Docks, but as such presided over the transformation of the Navy's shore establishment from one designed to support a small wooden-hulled Navy into that capable of supporting the modern steel navy of the 20th century. He also fashioned the means to achieve this end by transforming and enlarging the Civil Engineer Corps.

Mordecai Endicott was born at Mays Landing, New Jersey, on 26 November 1844, the son of Thomas and Ann Endicott and direct descendant of John Endicott, the first governor of the Massachusetts Bay Colony in 1629. Having completed his primary education in Mays Landing, he entered Rensselaer Polytechnic Institute and graduated as a civil engineer in 1868. After four years in the private sector, he was hired in 1872 as a civilian assistant civil engineer at the newly- established League Island Naval Station, Philadelphia, Pennsylvania. Eight months later he was placed in charge of the Civil Engineering Department of the Philadelphia Navy Yard. He remained in that position until 13 July 1874 when he was appointed a Navy Civil Engineer and sent to the Naval Station, New London, Connecticut.

From 1874 to 1890 Endicott served at various navy yards, moving up in relative rank to commander. In April 1890 he became the Consulting Engineer of the Bureau of Yards and Docks in Washington, which placed him in charge of all civil engineering work under the bureau's cognizance. The Consulting Engineer advised the Chief of the Bureau, a line officer, on technical matters. This assignment placed Endicott in a position of extreme responsibility because the shore establishment was in great need of modernization.

Although the construction of modern steel-hulled, steam-driven naval vessels had already begun, the Navy yards were operated and equipped in a fashion reminiscent of a bygone era. Ox- drawn carts still provided transportation in the yards and electric installations for light and power had yet to be introduced. Buildings were built of brick and lumber and dry docks of wood. The day of the steel and concrete navy yard was still to arrive. It fell to Endicott to begin the much-needed modernization. The final decade of the 19th century saw tremendous progress made in all avenues of engineering and industrial endeavor. It was Endicott's task to provide the modern Navy with a modern shore establishment which made use of the latest techniques available in the private sector. Because of the superb engineering and managerial talents that he had displayed during eighteen years of service at the principal Atlantic coast navy yards, Endicott was admirably suited to the task.

During Endicott's eight years as Consulting Engineer, the bureau entered into 110 construction contracts. Among the most outstanding projects, were timber dry docks with stone and concrete entrances for the shipyards at Puget Sound, Washington; New York, New York; and Port Royal, South Carolina; and the design of 40-ton locomotive job-cranes capable of handling the armor plating of the battleships then under construction.

Like other Civil Engineer Corps officers before and after him, Endicott became involved in one of the major engineering projects of the century: the building of an interoceanic canal. On 26 April 1895 President Cleveland appointed Endicott the Navy member of the Nicaragua Canal Commission of 1895.  This commission examined the canal route proposed by the Maritime Canal Company on the basis of feasibility, cost, and permanence. The commission's report led Congress to delay taking action on bills furthering the Nicaragua canal project which was eventually abandoned in favor of the Panama route.

On 19 July 1897 Congress forbade the Navy from paying more than $300 per ton for battleship armor. If armor could not be purchased within this limit, the Secretary of the Navy was authorized to establish a government factory to produce the armor in the quantities needed.

Endicott was appointed to a three member Armor Factory Board which proceeded to investigate the design and construction of such a factory. The board's detailed report when presented to Congress so impressed armor manufacturers that lower bids were swiftly forthcoming.

In early 1898, the term of RADM Edmund O. Matthews, USN, Chief of the Bureau of Yards and Docks, was expiring and President McKinley, on the recommendation of the Secretary of the Navy, determined to break with a 56-year precedent by appointing a Civil Engineer Corps officer instead of a line officer to the position. The nation stood on the brink of war with Spain and it was felt that a civil engineer should at last head that Navy bureau most intimately concerned  with civil engineering. As mentioned earlier, Civil Engineer Peter C. Asserson, USN, the senior Civil Engineer Corps officer was first offered the position which he declined by reason of age.

Mordecai Endicott, the next in seniority with eight years of accomplishment behind him as Consulting Civil Engineer, was clearly the man for the job. On 21 March 1898 Civil Engineer Endicott was promoted to the relative rank of captain and thus became eligible for appointment as chief. On 4 April 1898 Endicott was appointed Chief of the Bureau of Yards and Docks and advanced to the temporary relative rank of commodore. As we learned earlier, he subsequently also became the first Civil Engineer Corps officer to attain the rank of rear admiral.

After serving his first four-year tour as chief, Endicott was reappointed in 1902 for a second tour; and President Theodore Roosevelt reappointed him to a third tour in 1906. Reaching the mandatory retirement age of 62 on 26 November 1906, he continued as chief until 5 January 1907 at the request of the Secretary of the Navy. When Endicott became chief, the Civil Engineer Corps comprised only thirteen officers, a clearly inadequate number to meet the rapidly expanding requirements of the Navy. By the end of his tenure, Endicott had been able to get Congress to fix the number of Civil Engineer Corps officers at 40. Endicott was also instrumental in securing passage of a law in 1906 that required Chiefs of the Bureau of Yards and Docks to be selected only from among Civil Engineer Corps officers.

Mordecai Endicott achieved additional prominence in the engineering profession when he took steps to change the standard design of naval dry docks from timber to concrete and stone. He clearly foresaw that wooden dry docks would not meet the requirements of the modern battleship. Moreover, the higher maintenance costs of wooden dry docks made them less cost effective than those of concrete and stone. Endicott, however, faced formidable opposition from those who wished wood to remain the primary material for dry dock construction.

In the face of this opposition, Endicott convinced Congress to change the design of four dry docks which were about to be constructed from wood to concrete and stone. Eleven dry docks were constructed under Endicott's supervision, two of which were steel floating structures. Of the latter, the DEWEY is the most famous. It far surpassed in size any floating dry dock hitherto constructed and could dock a 20,000 ton vessel.

Once again Endicott was destined to be intimately involved in the interoceanic canal project. In 1905 President Roosevelt appointed Endicott the Navy member of the third Panama Canal Commission, which was overseeing the execution of that vast project. The commission was headquartered in Washington, DC, so Endicott could perform his duties as chief as well as work on the commission. The fourth commission which would, in 1907, replace the third commission was headquartered in the Canal Zone itself, but it, and Endicott's successor on it, is another story.

During his tenure as Chief of the Bureau of Yards and Docks, Mordecai Endicott always worked to secure the greatest possible economy in the expenditure of public funds. He advocated and finally obtained approval from Congress for the consolidation of all power plants at each of the larger Navy yards into a central station. This resulted in significant savings to the government. He also originated a design for large floating cranes, with a lifting capacity of 100 gross tons, which were capable of handling guns, turrets, boilers, and other extremely heavy objects.

As mentioned above, Mordecai Endicott finally resigned his office on 5 January 1907. However, he remained on active duty in the Navy Department until March 1907, when he was detailed to the Department of Justice as Technical Advisor to the attorney general on suits being prosecuted against the Navy Department. On 30 June 1909, having completed this work, he was relieved of active duty.

Following his retirement, RADM Endicott continued to make his home in Washington, DC; and in 1914 and 1917 he was again called to active duty with the Justice Department in connection with suits against the Navy Department. On 12 October 1917 he was recalled to active duty, this time with the Bureau of Yards and Docks. In addition to various technical duties, he acted at different times as president of four Navy examining boards for appointment of candidates to the Civil Engineer Corps. RADM Endicott's final assignment, as a member of a board which judged individuals worthy for various Navy decorations, ended on 30 June 1920.

RADM Endicott lived in retirement until 5 March 1926 when he died of pneumonia. He was buried with full military honors at Arlington Cemetery.