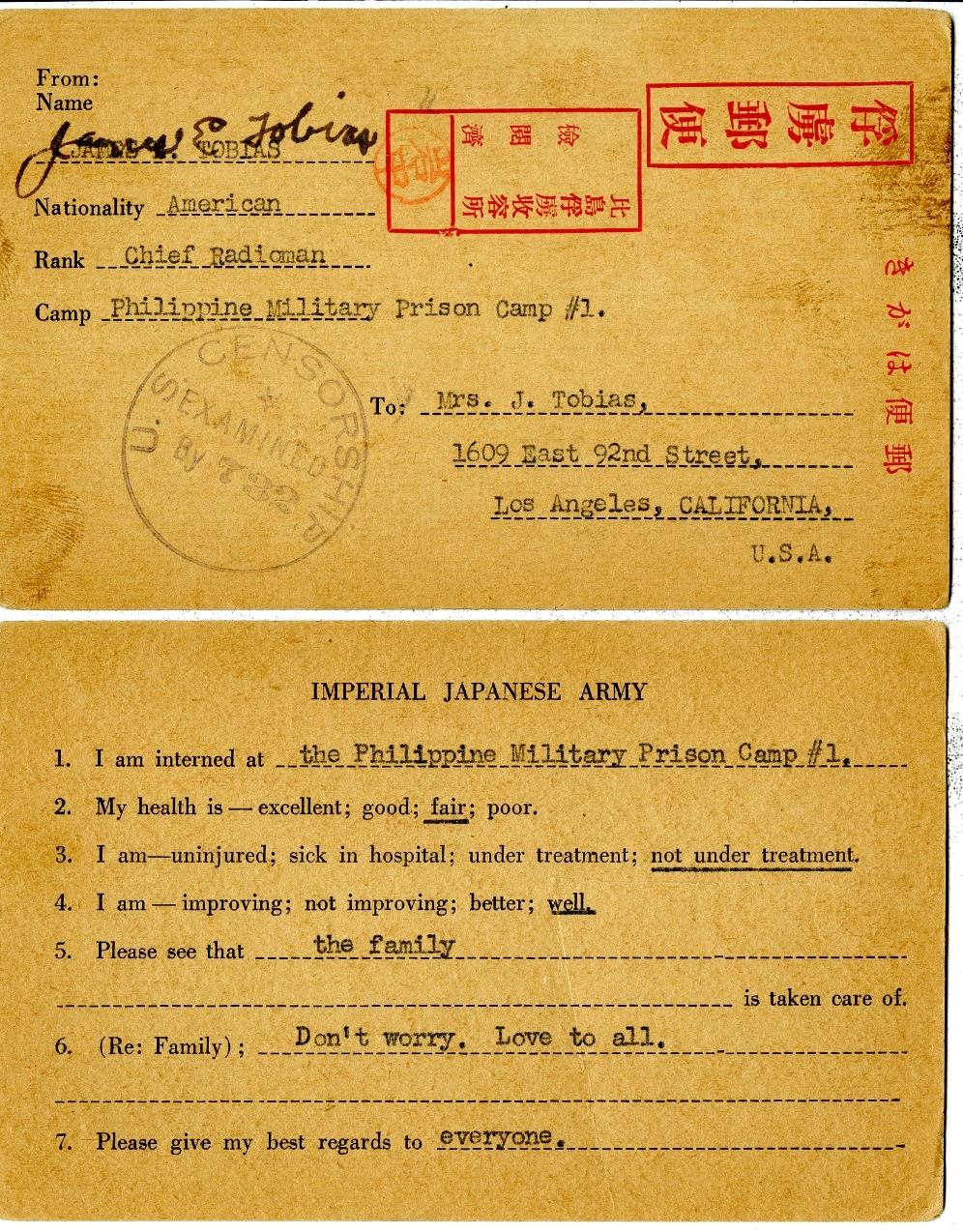 For fifteen Civil Engineer Corps officers World War II meant the grueling ordeal of the prisoner of war, an ordeal that six of the fifteen did not survive. With one exception, at the outbreak of the war, these officers were on duty in the Philippines, and on Guam and Wake Island; all were captured by the Japanese and became prisoners of war.

Another man, LCDR Charles B. Snead, CEC, USNR, was sworn into the Civil Engineer Corps on 2 May 1942 on Corregidor; he had previously been the Assistant Cavite Project Manager for Pacific Naval Air Bases, the civilian contractor consortium which was building bases throughout the Pacific area at the time.Following the collapse of U.S. resistance in the Philippines, he too was taken prisoner.

Finally, there was LCDR Allan T. Sylvester, CEC, USNR, who was residing with his wife in Manila when the Japanese attacked. At 56 years of age, he was in an inactive status and was never called to active duty. As a U.S. national he was imprisoned at a civilian camp in the Philippines until the islands were liberated. Unlike the above officers, he was not technically a prisoner of war because he was not on active duty when interned.

The fifteen active-duty officers taken prisoner underwent a variety of experiences during their captivity. LCDR Snead, LT Davis, LT Espy, LT Gilbert, LT Goodier, LT Greenwood, LT Steward, and ENS Yankey were imprisoned in POW camps in the Philippines. In September 1942, LT Gilbert was captured while trying to escape and executed. LT Steward and ENS Yankey spent the entire war imprisoned in the Philippines and were liberated by U.S. forces in January 1945. However, LCDR Snead and LT Davis were sent to camps in Japan in October 1942.

In January 1943 LCDR Snead died at Ofuna Prison on Kyushu of paralysis caused by diphtheria, having already been ill of malaria and beriberi since October 1942. LT Davis was imprisoned at the Shimogawa Prison Hospital, and was subsequently liberated by U.S. forces in September 1945. The remaining three Civil Engineer Corps officers captured in the Philippines, LT Espy, LT Goodier, and LT Greenwood, were placed aboard ship for transfer from the Philippines to Japan in December 1944. U.S. aircraft sank the ship before it could leave the Philippines. The surviving POWs, including the three Civil Engineer Corps officers, were transferred to another ship which made it as far as Formosa before it too was sunk. LT Greenwood was killed during this second attack. The surviving POWs were transferred to yet a third ship and completed the voyage to Japan. LT Goodier, however, who had spent time in the water during the earlier sinking and who had lost all his clothing, died of exposure and exhaustion shortly before reaching Japan. LT  Espy was sent to a camp near Mogi, where he died of pneumonia shortly after arriving.

In January 1942 LT Schwartz, ENS Carney and ENS Wolfsheimer were sent from Guam to the Zentsuji Prison on Shokaku Island, Japan. They were moved to several other camps in Japan and, in July 1945, ENS Carney was killed along with several other POWs when their air raid shelter was hit by a bomb during an air raid. The other two Civil Engineer Corps officers were liberated by U.S. forces in September 1945.

In early 1942 LCDR Greey, LTJG Robinson, ENS Walish, and ENS Williams were shipped from Wake Island to camps near Shanghai, China. Their place of incarceration changed several times during the war, moving to the Peking area, Korea, and finally Japan. They were liberated in September 1945 by U.S. forces.

Although not a Civil Engineer Corps officer, ENS Arthur G. Beale, USN, also deserves mention. ENS Beale arrived at Cavite, the Philippines, in November 1941 and was assigned to the Public Works Department. In December 1941 he and some of his Civil Engineer Corps comrades moved to Corregidor and were later taken prisoner when that bastion of resistance surrendered.

Although not a member of the corps, ENS Beale worked and later suffered alongside the Civil Engineer Corps officers assigned to the Cavite Public Works Department; and, at the end of the war, provided information about their fate.

While the Pacific War was bad enough for active combatants, it was especially bad for U.S. prisoners. Malnutrition, insufficient clothing and shelter, physical and mental abuse, prolonged separation from loved ones, lack of information, and the uncertainty of serving what amounted to an indeterminate sentence took a terrible toll. Added to this was the hazard that prisoners faced from Allied bombers and submarines when at sea or in the camps. In the end, the death rate for Civil Engineer Corps POWs was a flat 40 percent!

World War II gave the Civil Engineer Corps one final prisoner of war: CDR Charles Curione, CEC, USN.  CDR Curione, however, was not a member of the corps at the time he was made a prisoner of war. While a member of the U.S. Army Eighth Air Force and a navigator aboard a B- 17 "Flying Fortress," Curione was shot down over Hamburg, Germany, in June 1944, and spent the remainder of the war in a German POW camp. In .June 1947 he entered the Civil Engineer Corps as an Ensign and subsequently retired with the rank of commander.

The nine Civil Engineer Corps officers who survived their imprisonment all had one thing in common: they chose either to make the Navy their career or remain active in the Naval Reserve. LT James Davis, the only regular officer in the group, retired as a rear admiral. Four of the reserve officers made the Navy a career and retired as regular officers. They were LCDR Greey and ENS Yankey, both of whom retired as captains; and LTJG Schwartz and LTJG Robinson, both of whom retired as commanders. LT Jerry Steward, who won the Navy Cross and other decorations for his actions during the initial Japanese attack on Cavite and who was the most decorated Civil Engineer Corps officer of World War II, retired in the reserve as a rear admiral. ENS Walish, ENS Williams, and ENS Wolfsheimer all retired as commanders in the reserve.

LCDR Sylvester, who spent the war as a civilian internee, received an honorary retirement from the Naval Reserve in 1951 in the rank he held at the beginning of the war.

Those Civil Engineer Corps officers who spent the war as prisoners of the enemy bore a great burden. Nevertheless, it is clear from their subsequent service that the ordeal endured so bravely by these men did not dampen -- and perhaps even strengthened -- their desire to serve their country.