The Civil Engineer Corps at the Other Pole: Operation Deepfreeze Construction 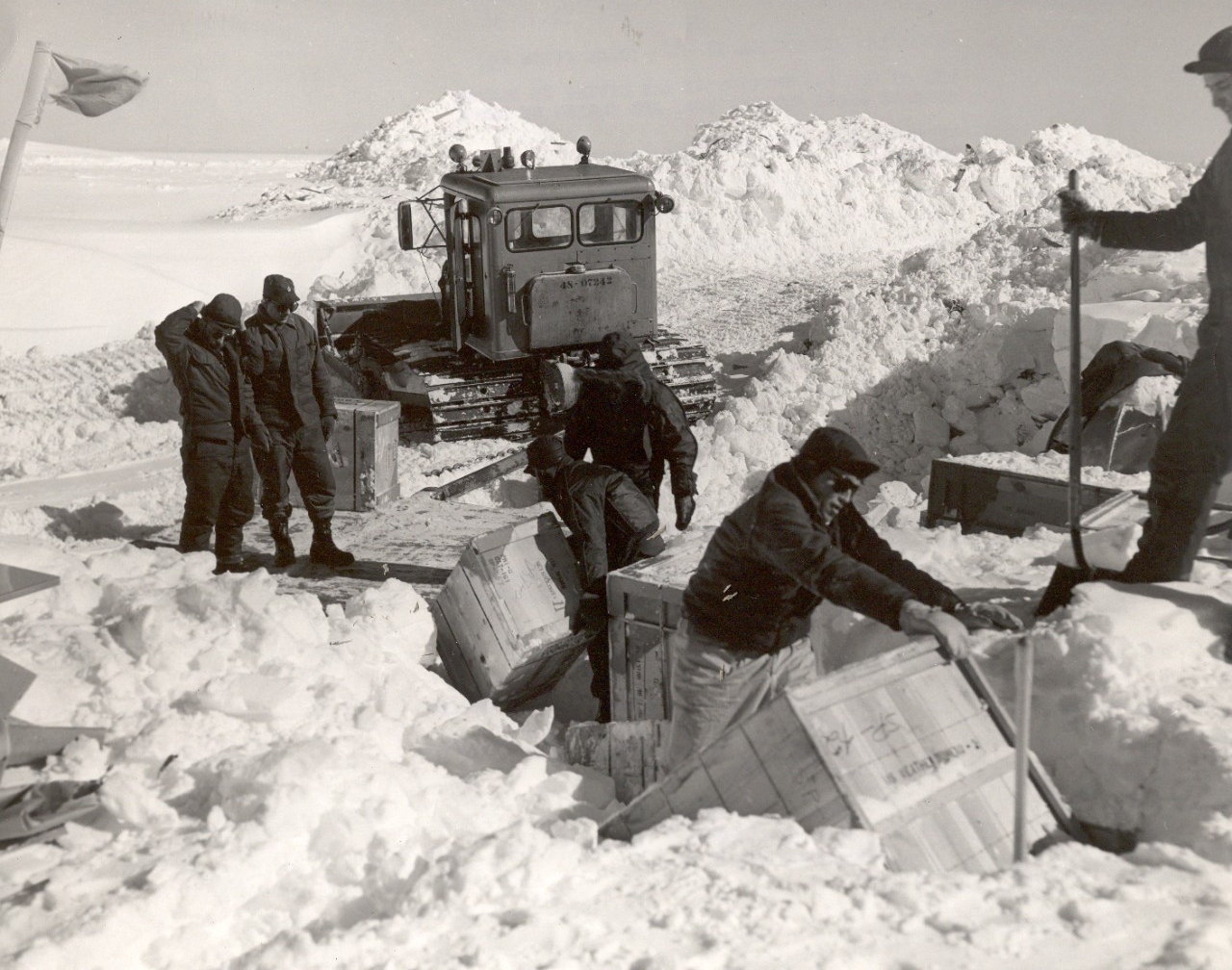 Seabees and CEC at Antarctica, 1956

In the tradition of RADM Robert E. Peary, other Civil Engineer Corps officers, this time accompanied by Seabees, headed for freezing cold climes in the mid-1950s. This time, however, the destination was the Antarctic rather than the Arctic.

In 1954, the Department of Defense agreed to furnish logistic support for Antarctic research planned for the International Geophysical Year, which was to begin on 1 July 1957. The Navy was designated to carry out this mission and in September 1954, Navy Task Force 43 set out for Antarctica to begin building the necessary research and support facilities. The task of construction fell naturally enough to the Bureau of Yards and Docks and to the Seabees. In February 1955 Mobile Construction Battalion (Special) was formed at the Naval Construction Battalion Center, Davisville, Rhode Island, and with technical assistance from the Bureau of Yards and Docks, plans were made for the construction and maintenance of the Antarctic stations.

The first deployment of Mobile Construction Battalion (Special) in 1955, known as “Deepfreeze I,” called for the establishment of two stations, one at Kainan Bay (Little America) and the other at McMurdo Island. The battalion wintered over at these two stations and built the Byrd and  Pole stations during Deepfreeze II (1956-57). All this construction was done under very severe conditions, some of the worst ever encountered by the Civil Engineer Corps and Seabees.

Temperatures could fall as low as 100 degrees below zero and the severe cold put great strains  on both men, material, and equipment. By the start of the International Geophysical Year in 1957, the necessary facilities were ready and the battalion's mission had become station maintenance.  Deepfreeze III and Deepfreeze IV were primarily resupply missions and the latter was supposed to mark the termination of the program and the closing of the bases.

Events, however, took a different course. The scientific community wanted to do further research in the Antarctic and, thus, the U.S. government decided to continue the program indefinitely, albeit at a reduced level. By 1959 Naval Mobile Construction Battalion (Special) had  been replaced by Antarctic Support Activities, still homeported out of Davisville. That same  year, Detachment ALFA of this unit was established at Davisville to serve as a wintering over force. The mission of Antarctic Support Activities was to operate and maintain station facilities and provide logistic support for the accomplishment of U.S. scientific programs in Antarctica. Antarctic Support Activities deployed annually to Antarctica in September and returned in March, leaving Det. ALFA to maintain the stations during the austral winter. During this period regular Naval Mobile Construction Battalions deployed to Antarctica to carry out needed construction. Beginning in 1960 Deepfreeze operations were named after the fiscal year.

During Deepfreeze 60 NMCB-6 built a new above-ground station on the Palmer Peninsula and the following year built the first highway in Antarctica. New docking facilities were built at McMurdo as well as a new dispensary, and generator and water distillation plants. The year 1962 saw the construction of the first nuclear power plant to operate in Antarctica. The facility was built at McMurdo Station and operated by the Naval Nuclear Power Unit, a subordinate organization of the Bureau of Yards and Docks. The PM-3A reactor supplied 60 million kilowatts hours of electricity and 13 million gallons of potable water (produced from seawater) to McMurdo Station between 1962 and 1974, when it was finally shut down.

During Deepfreeze 67 a newly established Seabee unit, Naval Construction Battalion Unit 201, joined the Naval Support Force, Antarctica (previously Antarctic Support Activities). Prior to 1967 regular battalions on a rotating basis had deployed to Antarctica; however, the Navy decided that a unit specialized solely for Antarctic construction would be more effective in the unusual and hostile environment that exists at the South Pole. During the following years, CBU- 201 completed numerous projects, including personnel housing, warehouses, and scientific research facilities. The major problem that plagued the Seabees of the unit was the lack of sufficient construction time for the projects planned. Adverse weather and material status worked to reduce the already limited time available, so that projects had to be completed over successive Deepfreeze deployments. In 1971, CBU-201 began construction of a new South Pole station, designed by the Naval Facilities Engineering Command, and several other projects were completed. Finally, after five straight years of Deepfreeze deployments, CBU-201 was disestablished at end of Deepfreeze 71.

During Deepfreeze 72, a regular Seabee battalion, Naval Mobile Construction Battalion 71 performed necessary construction and maintenance under the Deepfreeze program. Seabee participation in unit strength continued for two more years, finally ending in 1974. Beginning with Deepfreeze 75 all construction work for the Naval Support Activity and the National   Science Foundation was done by contract. Only a few Civil Engineer Corps officers and Seabees remained and they were assigned to public works activities. Despite the phase out of Seabee unit support, the Naval Facilities Engineering Command remained active in the Deepfreeze program. The 1975 mission reduction at the Naval Construction Battalion, Davisville, however, made necessary the transfer of the Command's support activities to the Naval Construction Battalion Center at Port Hueneme, California. The experimental air squadron assigned to the Deepfreeze force was transferred to the Naval Air Station at nearby Point Mugu, California. Thus, large- scale Civil Engineer Corps and Seabee participation in construction at the bottom of the world came   to an end after more than a quarter of a century of effort under some of the most hostile conditions imaginable.