The Civil Engineer Corps and the first Seabees: The mystery of the two “first battalions” 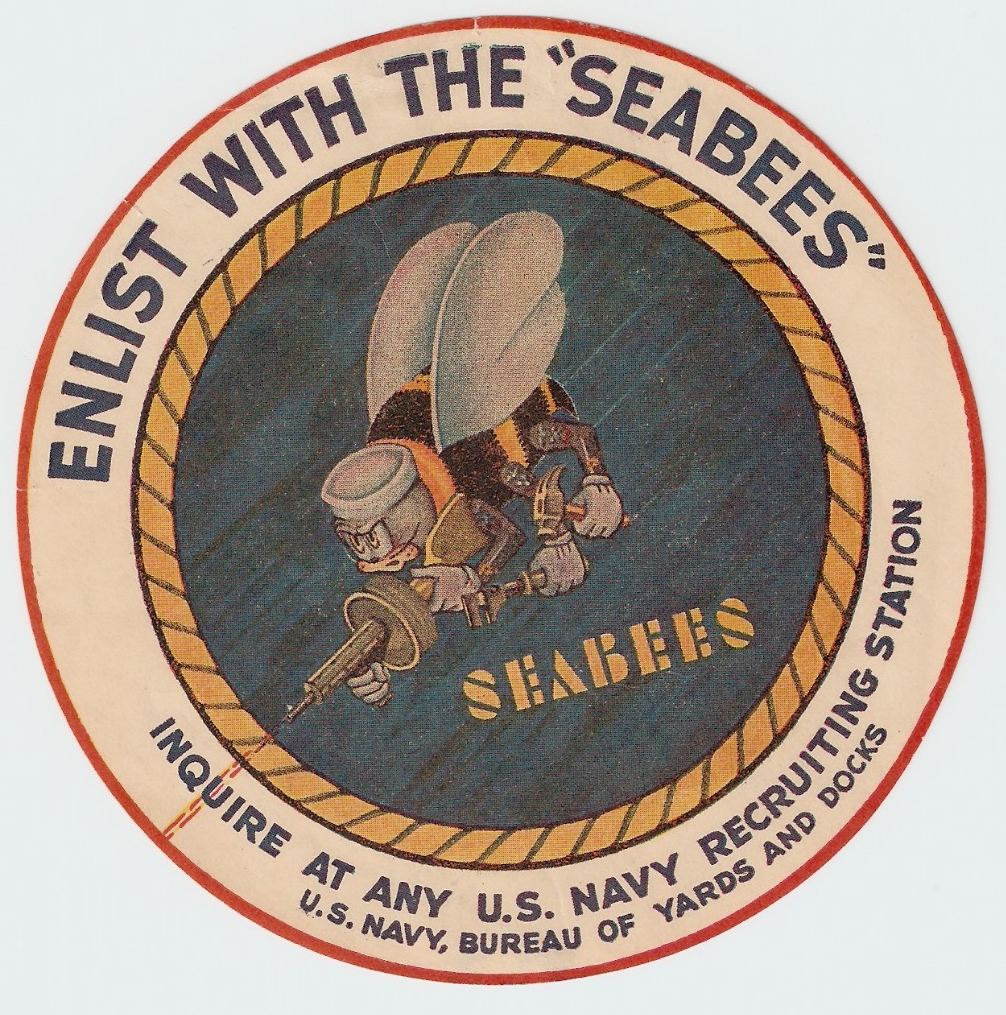 A question frequently heard is “Who were the first Seabees?” The answer is complicated by the fact that for a time during the early days of World War II there were two units which bore the designation “First Construction Battalion.”

The use of civilian construction workers was impractical in forward areas. Such workers could not defend what they built and if they attempted to do so could be executed as guerrillas under the terms of the Geneva Convention. In accordance with war plans formulated during the 1930s, RADM Ben Moreell, Chief of the Bureau of Yards and Docks, requested authority to raise Navy construction units on 28 December 1941. On 5 January 1942 the Bureau of Navigation granted him authority to recruit experienced construction workers and organize them into a construction regiment comprising three battalions. Events,  however, outran planning. The Navy immediately needed a fueling station built on Bora Bora in the French Society Islands to support ships and planes that were keeping open the sea lanes to Australia. There was no time to complete the organization and training of the newly authorized construction regiment; construction men were needed at once on Bora Bora!

To meet the demands of this critical situation, the Bureau of Yards and Docks proposed to organize a single construction battalion to be known as "Construction Battalion BOBCAT" after Bora Bora's code name. The battalion was to be formed around the First Headquarters Construction Company which had been trained and equipped for an assignment on Iceland but was still at Newport, Rhode Island.  As mentioned earlier, this unit had originally been authorized on 31 October 1941 to perform administrative duties and oversee the work of civilian contractors and was composed of draftsmen, engineering aids, and inspectors. To the 100 men of the First Headquarters Construction Company, many of whom were experienced construction men, was added a draft of 150 general service recruits from the Newport Basic Training Camp who had no construction experience. The new unit was to consist initially of eight officers and 250 enlisted men. Additional personnel drafts were subsequently to increase its size.

The Bureau of Yards and Docks approved the draft organization of Construction Battalion BOBCAT on 9 January 1942; and on 10 January, the bureau requested that the Bureau of Navigation also approve the new unit and issue orders for its establishment. The Bureau of Navigation did so and the personnel of the new battalion assembled at the Naval Air Station, Quonset Point, Rhode Island, for a brief familiarization course in construction equipment operation and Quonset hut erection. Following this training, the men were sent to Charleston, South Carolina, where the battalion was to be officially formed and then depart for Bora Bora.

On 14 January 1942 the Bureau of Navigation ordered LCDR Harold M. Sylvester, CEC, USN, to report to the Commandant, Sixth Naval District at Charleston “...for duty in the connection with the organization of the First Construction Battalion and as officer in charge of that battalion when organized.” On 21 January 1942 LCDR Sylvester informed the Bureau of Navigation that “The organization of the Battalion was completed and the Battalion was placed in service by the Commandant, Sixth Naval District [RADM William H. Alan, USN] at 11:00 a.m. this date.” Thus, the first Seabee battalion came into existence.

Although called a “battalion,” the new unit was only a reinforced company in terms of actual strength. Despite this, it was commanded by a lieutenant commander and was officially designated the "First Construction Battalion, USN." Only six days after its establishment, on 27 January, the battalion shipped out for Bora Bora.

While the unit might be the first construction battalion, its personnel did not call themselves Seabees. The term “Seabee" was not coined until a month after the battalion's departure and it was not approved by the Bureau of Navigation until 5 March 1942. Lacking a name, the construction men of the new unit called themselves “Bobcats” after their destination's code name. They did not know that they were Seabees until a 120-man draft for the unit arrived on Bora Bora in June 1942. The new men called themselves Seabees and the old Bobcats learned to respect the new name when they subsequently heard of Seabee exploits on Guadalcanal.

As it turned out, the two proposed detachments were not formed separately, but as a single battalion on 15 March 1942 at Camp Allen (named after CAPT Allen of 12th Regiment fame), Norfolk, Virginia. The new battalion was designated the First Construction Battalion! However, unlike the "battalion" formed at Charleston on 21 January, this first battalion had a normal table of organization: one Headquarters Company and four construction companies with a total complement of 1,080 men. On 1 April 1942 the new battalion was officially divided into two detachments (as originally anticipated in the planning). One half of the headquarters company and “A” and “B” companies became the Second Construction Detachment, commanded by LCDR Forrest E. Byrns, CEC, USNR. The remainder of the Headquarters Company and companies    “C” and “D” became the Third Construction Detachment, commanded by LT (later RADM) Harry N. Wallin, CEC, USN.

There now existed three construction detachments: the first was building fueling facilities on Bora Bora, while the second and third completed their training at Camp Allen. On 8 April 1942 the Second Construction Detachment departed for Tongatabu to build a fueling station and air base. Four days later, on 12 April, the Third Construction Detachment departed for Efate to build a forward air base.

The Third Construction Detachment completed many significant projects while in the New Hebrides Islands. The most important involved forward air base construction. Not only did the detachment build an airfield and facilities on Efate, but part of the detachment also built an extremely important airfield on Espiritu Santo (code name BUTTONS). This 6,000-foot coral- surfaced field, built in only 20 days, allowed U.S. aircraft to begin bombing the Japanese airfield on Guadalcanal before it could be completed and planes from it sent into action against U.S. forces.

Thus ends the strange tale of the two “first battalions.” The Bobcats were the first officially established "construction battalion," despite the fact that the unit's original strength was only 8 officers and 250 men. The unit was established as the First Construction Battalion because the Bureau of Yards and Docks planned to augment it with additional personnel and bring it up to battalion strength. The plan, however, was quickly abandoned as the situation in the Pacific evolved.

Less than two months after the Bobcats sailed for Bora Bora, the Navy established another First Construction Battalion. This full-strength battalion has the distinction of being the “first battalion” in reality as well as in name. One final point should be emphasized again: the First Construction Detachment (the Bobcats) had absolutely no connection -- either organizationally or as regards service -- with the Second and Third Detachments. While the latter were originally part of the same battalion and while they were reformed as such early in 1943, the First Detachment had an entirely separate existence.