Seabee Team 1104 and the Battle of Dong Xoai 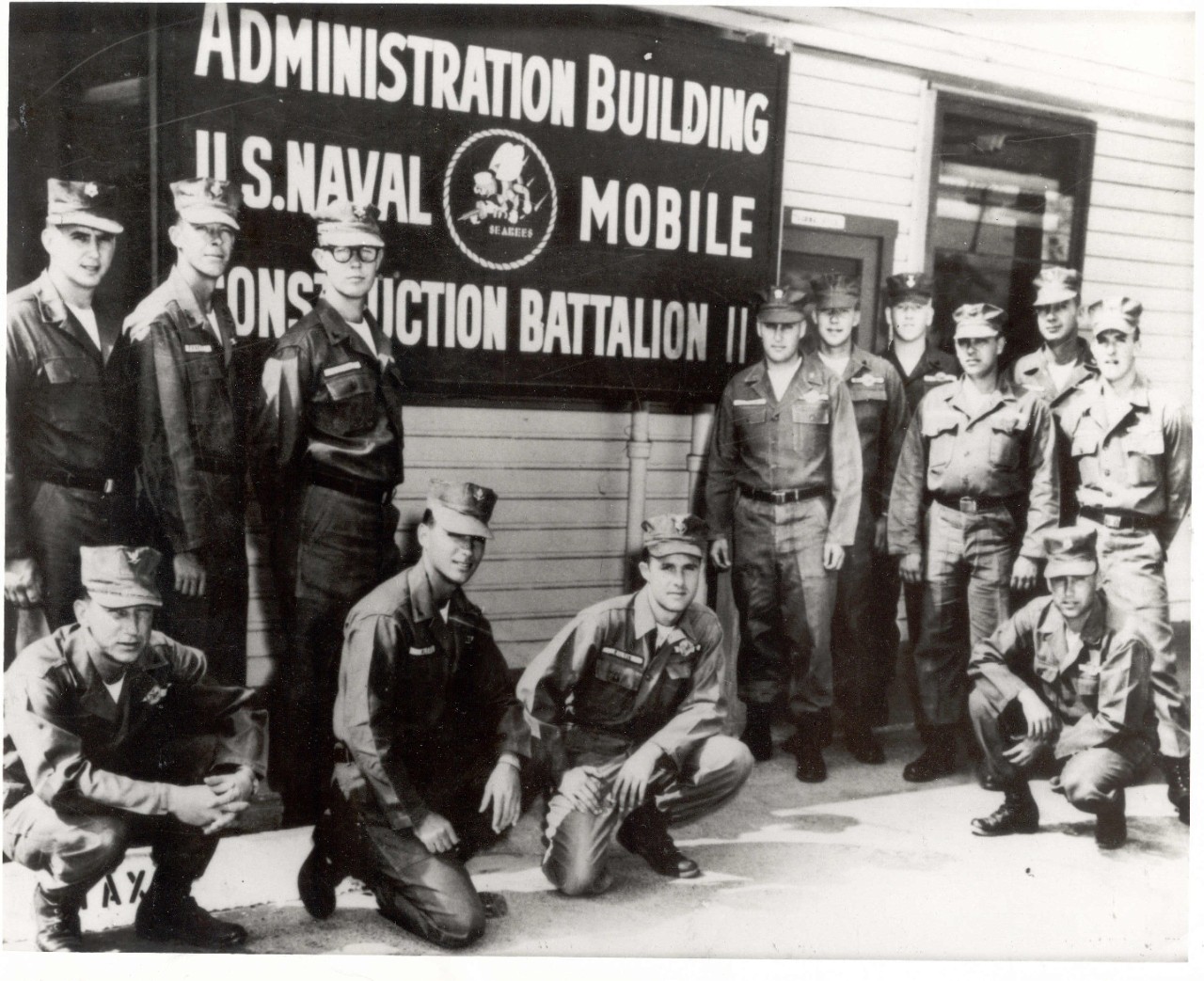 On 9 June 1965, LTJG Frank A. Peterlin, CEC, USNR, and his Seabee Technical Assistance Team 1104 were in the process of constructing and improving the facilities of a Civilian Irregular Defense Group Camp (CIDG) adjacent to the village of Dong Xoai, 55 miles north of Saigon, Republic of Vietnam. The camp housed two CIDG companies, a Regional Forces company, a Vietnamese Special Forces company, an armored car platoon, a 105 mm howitzer battery, and the District Headquarters.

On the faithful night of 9 June, 9 members of Seabee Team 1104, 11 members of U.S. Army Special Forces “A” Team 342, and a Vietnamese defense force of approximately 400 men were in the camp. Just before midnight elements of the Viet Cong 9th Division, later estimated to be a reinforced regiment of approximately 2,000 men, launched an attack on the camp. The attack was initiated by a mortar and recoilless rifle barrage which almost immediately hit the buildings housing the camp's communication equipment, aid station, and U.S. personnel; the radio was knocked out, medical supplies destroyed, and many of the Americans were killed outright or wounded. The U.S. and Vietnamese personnel, including ambulatory wounded, manned the defensive berms and returned fire. For the next three hours the enemy poured mortar, recoilless rifle, machine gun and small arms fire into the camp. During this period LTJG Peterlin, four of his Seabees, and five Special Forces men took up defensive positions at the north end of the camp.

During the first moments of the attack, Captain Stokes, the commander of the Special Forces unit, was severely wounded in both legs by a mortar round while trying to reach the communications shack and call for help. His second in command, Lieutenant Charles O . Williams, USA, located a small PRC-10 radio which was still workable and radioed Saigon for help. He then proceeded to organize the defense of the compound as best he could. At approximately 0100 a flare-dropping aircraft arrived to illuminate the area for the defenders;  and 45 minutes later armed helicopters began bombing and strafing north and west of the camp.

At approximately 0245 the Viet Cong, supported by artillery, rockets, machine guns and small arms, and using grenades and flame throwers, assaulted the northeast area of the “L”-shaped camp.  During this assault, LTJG Peterlin exposed himself to enemy fire and at close range shot  a Viet Cong armed with a flame thrower. The gallant defense was, however, to no avail. Greatly outnumbering the defenders, the enemy overran their positions. CMA3 Marvin G. Shields, USN, and UTP2 Lawrence W. Eyman, USN, successfully withdrew to the southeast area of the compound and joined the rest of the U.S. personnel there.

LTJG Peterlin, SWF2 William C. Hoover, USN, and Special Forces Staff Sergeant D. C. Dedman, USA, were cut off from the rest of the defenders and withdrew toward the east side of the camp as the Viet Cong were overrunning the north side. Both Hoover and Dedman had been previously wounded and now LTJG Peterlin was knocked down by an exploding shell and wounded in the right foot by a bullet.All three attempted to crawl through the concertina wire on the east side of the camp and in the process Peterlin became separated from the other two men. Both were later found dead.   Despite intense enemy fire, Peterlin managed to escape the camp, taking refuge in a foxhole several hundred feet away. LTJG Peterlin remained in the foxhole for rest of the night, and throughout the next day and night while Viet Cong on all sides of him fired on U.S. and Vietnamese aircraft attacking their positions. After the Viet Cong withdrew, LTJG Peterlin was helped to a helicopter by a Vietnamese soldier and rescued.

LTJG Peterlin's second in command had an equally harrowing time. EOC Johnny McCully, USN, the team's chief petty officer had also fought on the north berm alongside CIDG soldiers, manning both a machine gun and recoilless rifle. Although wounded by shrapnel and a machine gun bullet, McCully kept fighting until the Viet Cong overran the position. Then he, like Peterlin, had to withdraw. Accompanied by two Vietnamese soldiers, McCully made his way out of the compound and through the village of Dong Xoai. He took refuge in a small sawmill until the morning of 11 June when the Viet Cong withdrew and he was able to join LTJG Peterlin at the rescue helicopter.

At about the same time that Peterlin and McCully were successfully escaping from the northeast area, the remaining American and Vietnamese defenders were barricading themselves in the District Headquarters building in the southeast area. The Viet Cong had originally directed their main effort at this area, making an intense attack against it at approximately 0300 hours on 9 June. Shields and Eyman had already arrived, helping to carry in the wounded Captain Stokes. The remaining Vietnamese defenders, five Special Forces men, and the five Seabees of Seabee Team 1104 still in action valiantly defended themselves against the attacking Viet Cong. The defenders fought on till dawn against the attacking communist troops, while air attacks against the enemy continued. The Seabees distinguished themselves repeatedly, especially Marvin Shields, who although wounded several times continued to fight. Before the battle ended all of the American personnel involved, with only one exception, were wounded, some repeatedly. Shields was finally mortally wounded while helping Lieutenant Williams knock out an enemy machine gun with a rocket launcher.

Early in the afternoon of 10 June, after hearing that a 200-man Vietnamese force sent to their aid had been wiped out, the surviving Americans withdrew to a lOSmm gun pit near the District Headquarters building to make their last stand. They were informed by radio that another relief force, this time a battalion of Vietnamese Rangers, was on the way and that they, the defenders, would be helicoptered out after the relief force cleared the area. The helicopters, however, did not come and with their ammunition almost gone the Americans awaited the final Viet Cong assault. However, before the attack was launched, another air strike hit the Viet Cong and the embattled Americans finally heard the sound of approaching helicopters.

While the Vietnamese Rangers held the enemy at bay, the helicopters landed and rescued the surviving defenders. The helicopters, however, came too late for Marvin Shields who died of his wounds while being evacuated.

The ordeal of LTJG Peterlin and EOC McCulley continued for yet another day; however, they successfully evaded the enemy until until picked up by a rescue helicopter at approximately 0730 on 11 June. The battle of Dong Xoai was over. Of the nine members of Seabee Team 1104 present, two were killed in action and six were wounded. All acquitted themselves in the very best tradition of the U.S. Navy.

CMA3 Marvin G. Shields, USN, was posthumously awarded the Congressional Medal of Honor for his courageous actions on 9 and 10 June 1965. He became the first Seabee to be awarded the nation's highest decoration. LTJG Frank A. Peteilin and EOC Johnny McCully were awarded the Silver Star. SWF2 William C. Hoover, USN, was posthumously awarded the Bronze Star Medal with Combat “V”. The remaining five Seabees also received the Bronze Star with Combat “V” and the entire Seabee Team received the Navy Unit Commendation.

In what was then still a little known part of the world, LTJG Peterlin and his Seabees fought bravely side by side with the Army's finest, suffered wounds and deaths, and acquitted themselves proudly.

All Hands article - The Brave Men of Dong Xoai 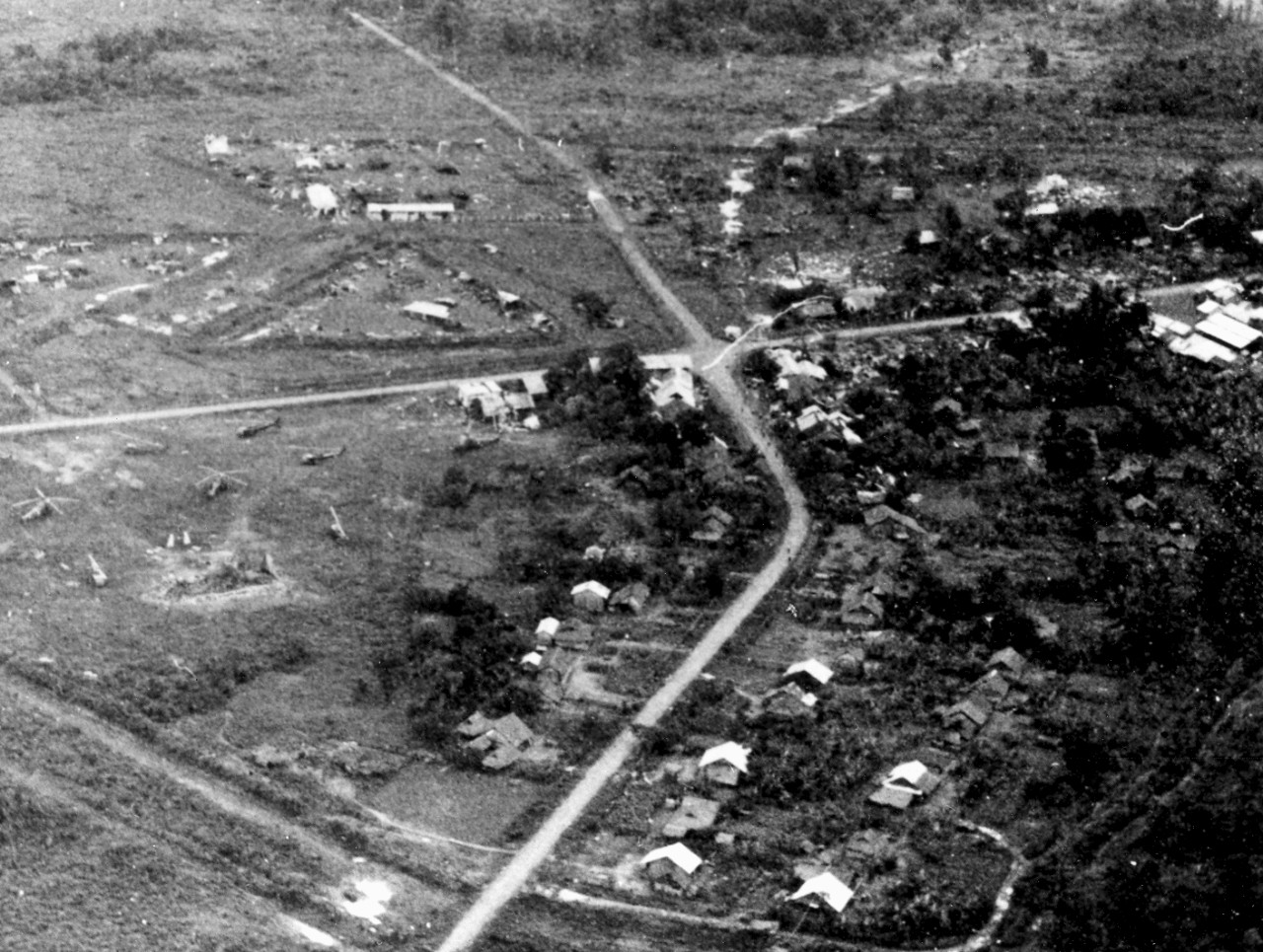 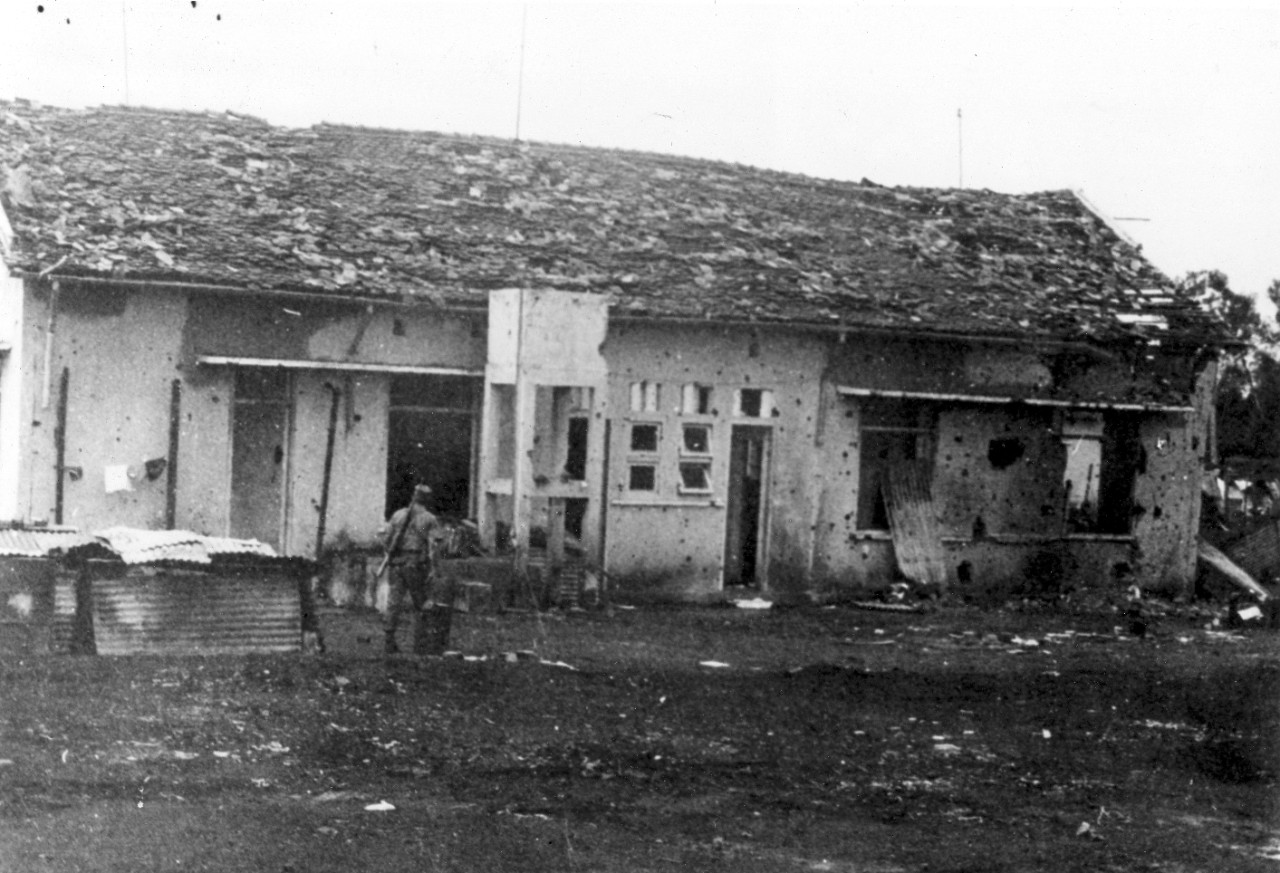 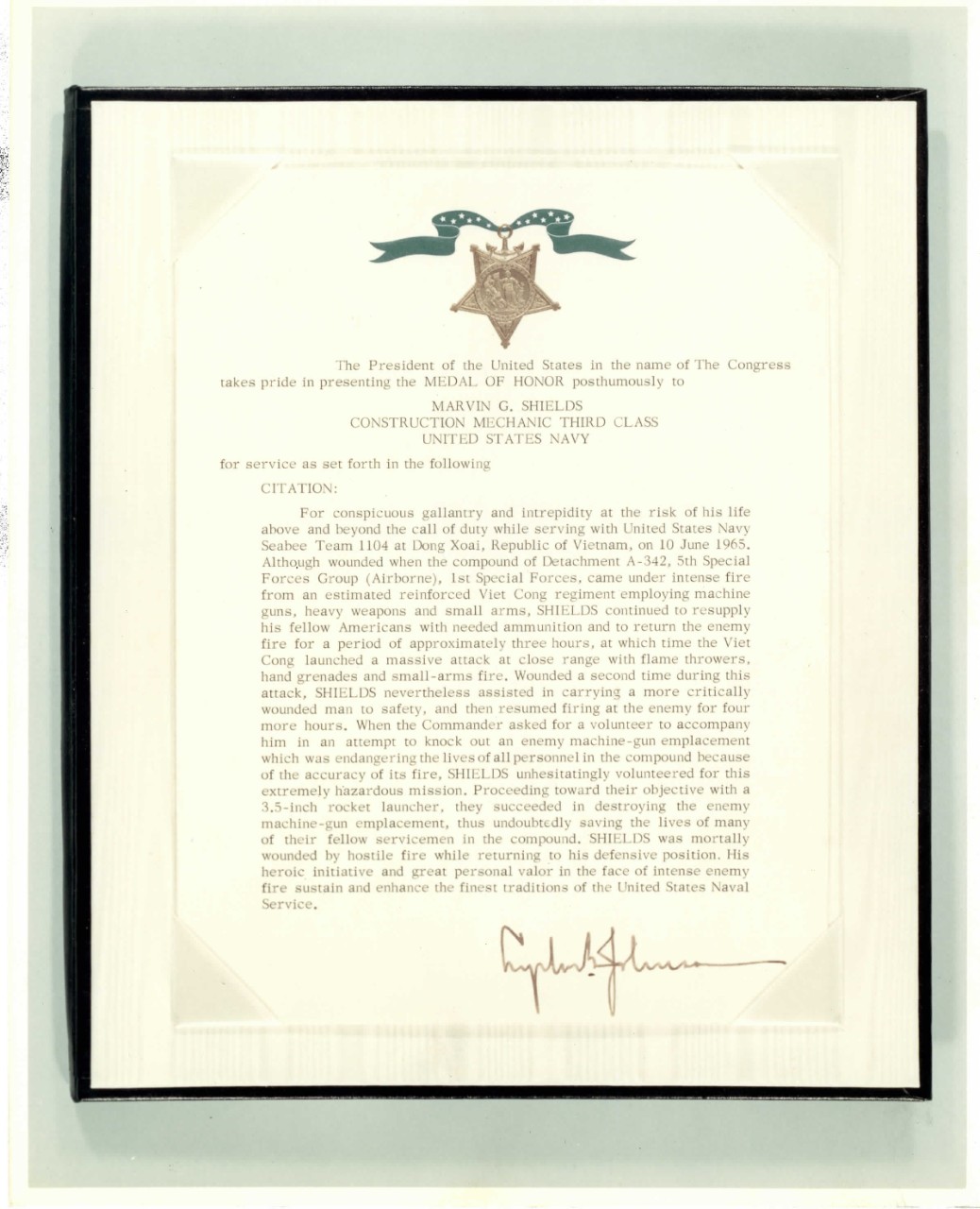 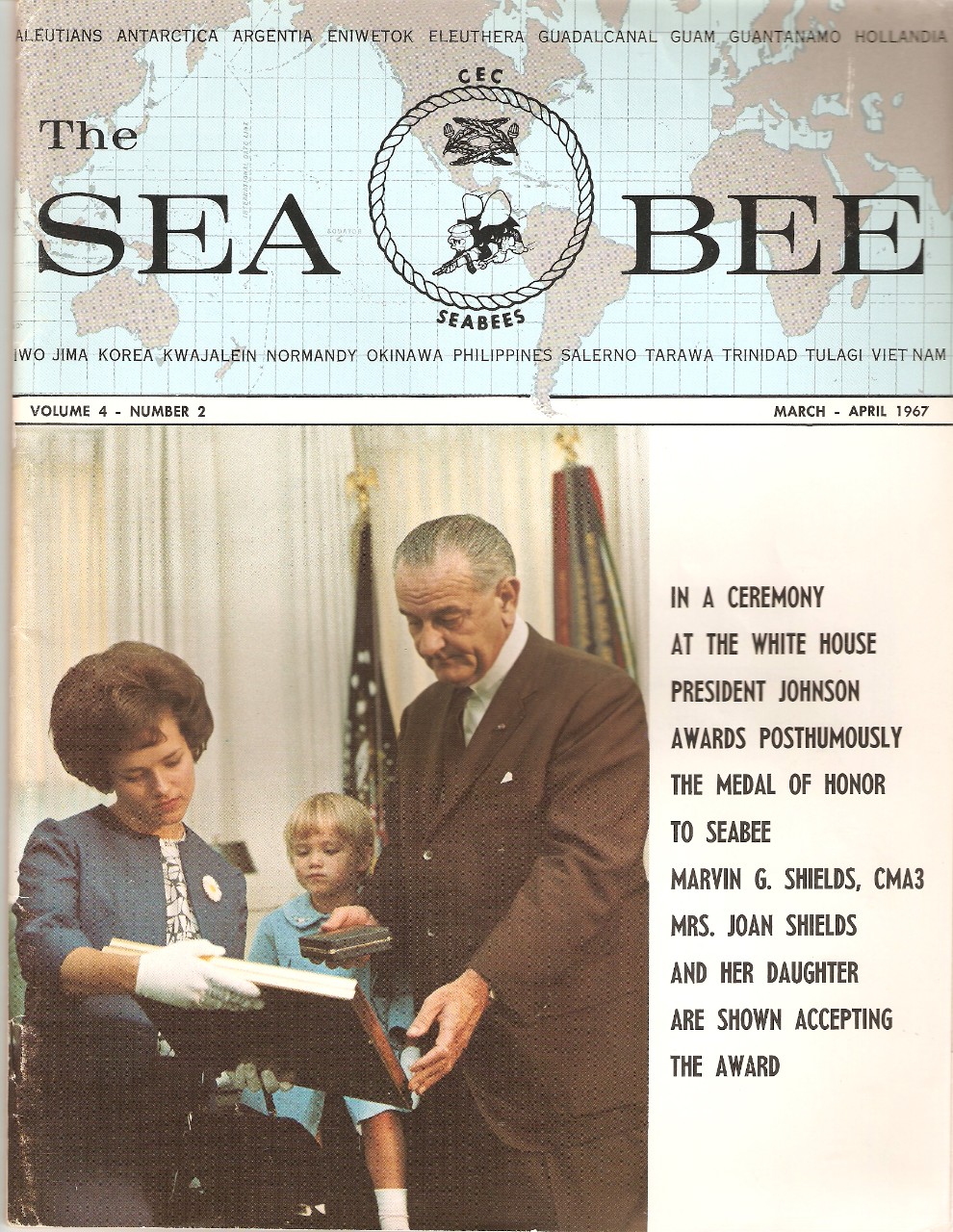 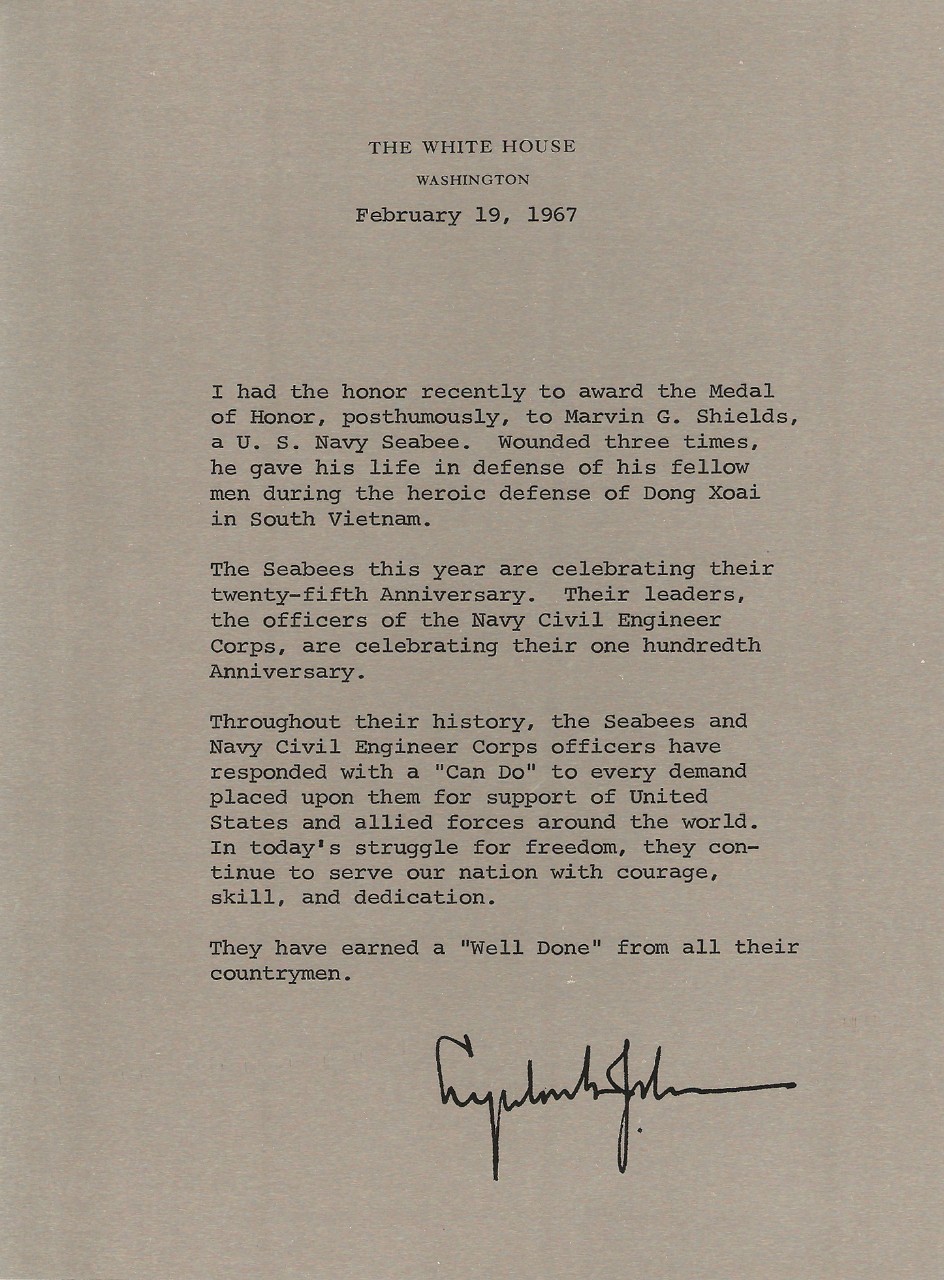 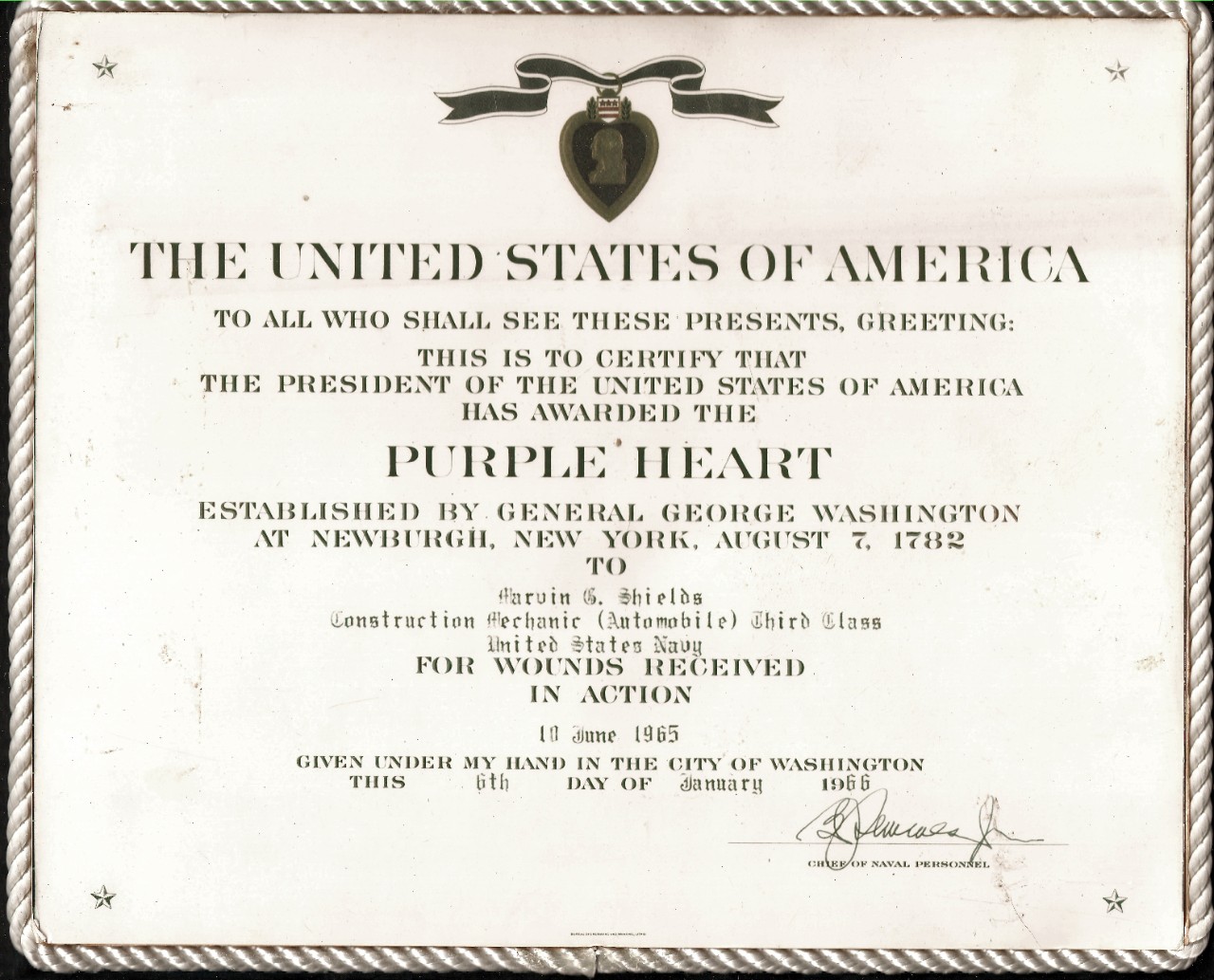 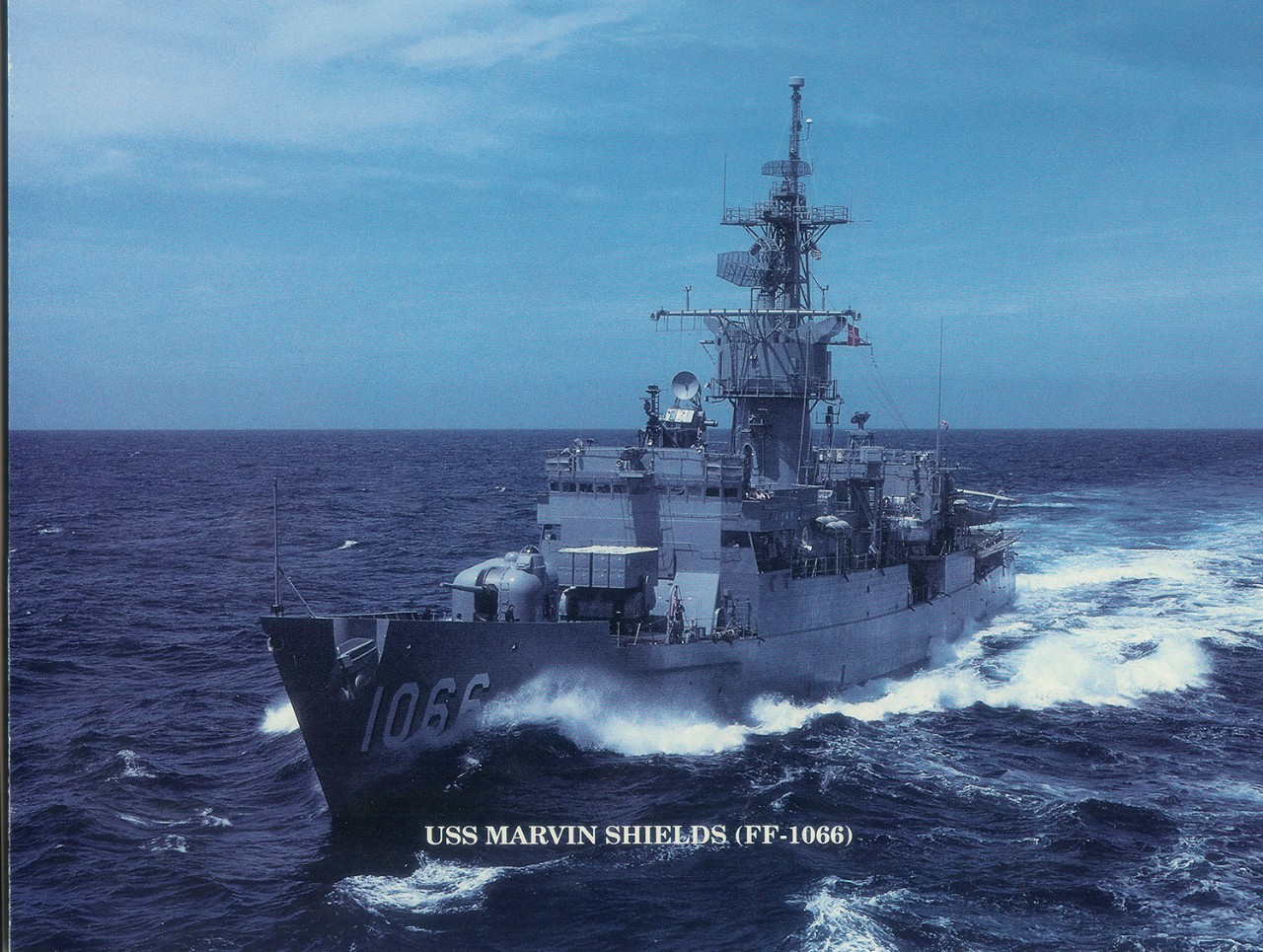