The Twelfth Regiment (Public Works) and the Origin of the Seabees 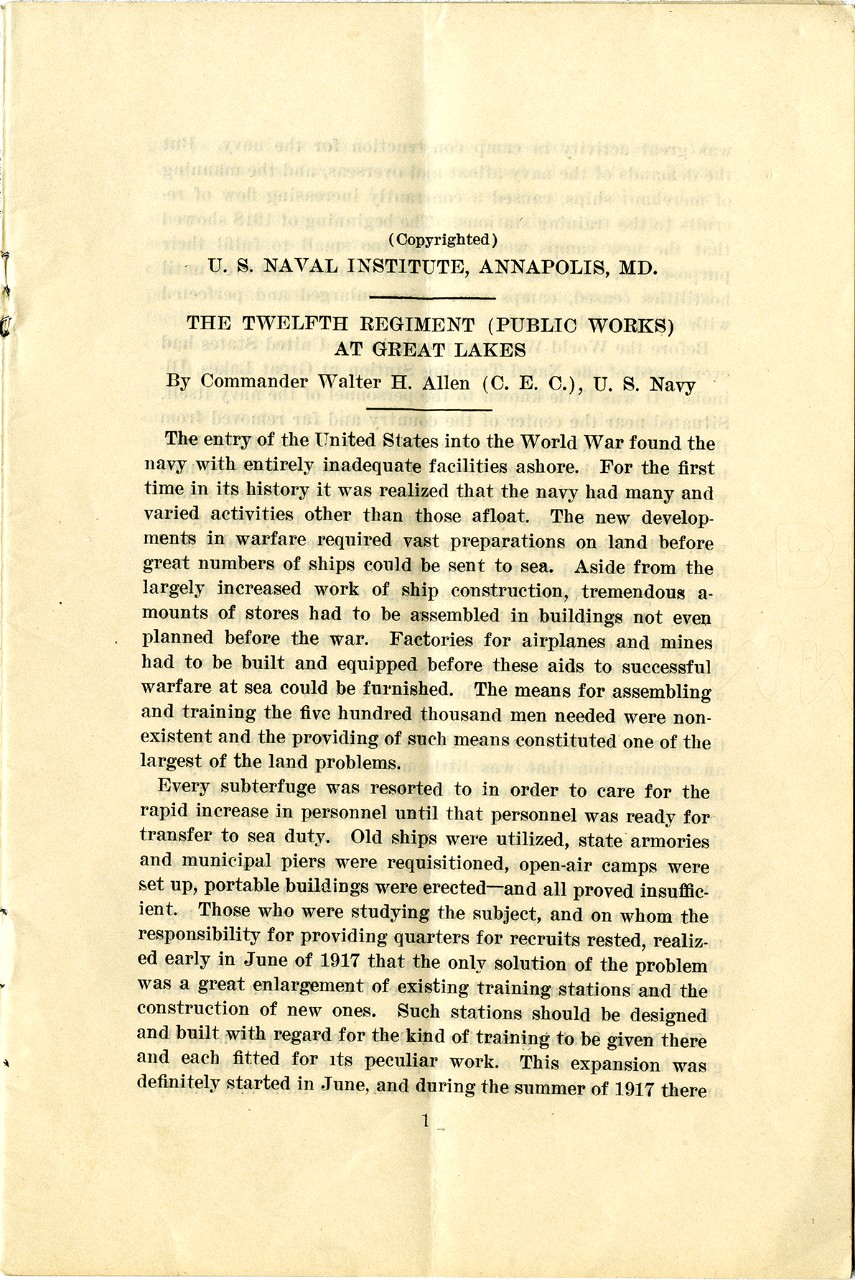 The “ancestral home” of today's Naval Construction Force is, oddly enough, located in the Midwest rather than at one of the coastal sites so long associated with the Seabee battalions.

The Naval Station at Great Lakes had originally been constructed during the period 1905-1911 and was the first major permanent inland Navy installation. It was designed to accommodate a station crew of 1,500 and was considered the ultimate in design and construction. During World War I, and particularly after the arrival of CAPT William A. Moffett, USN (later to become a rear admiral and Chief of the Bureau of Aeronautics), the station became the prime training facility for thousands of seaman. CAPT Moffett recognized the value of the location outside of Chicago, the hub of the nation, and its potential for rapid expansion. His proposal to expand the station's facilities to accommodate 15,000 men was approved by Secretary of the Navy and the Bureau of Navigation.

Events moved rapidly in the spring of 1917, but not rapidly enough for CAPT Moffett. Men poured into Great Lakes much faster than housing and training facilities could be built. In addition to the 11 training regiments already at Great Lakes, Moffett decided that a 12th training Regiment composed of skilled artisans would be useful for providing vitally needed facilities for his command. Moffett was fortunate in obtaining the professional services of three first-rate  Civil Engineer Corps officers as his public works officers whose combined efforts resulted in the unique organization of the 12th Regiment (Public Works).

Although the first of the three public works officers, CDR Norman M. Smith, CEC, USN, had technical control of the regiment, military command was in the hands of a line lieutenant, since Civil Engineer Corps officers were not permitted to exercise command at the time. Smith, who would later become a rear admiral and Chief of the Bureau of Yards and Docks (1933-1937), personally led a recruiting campaign in the greater Chicago area in order to fill the regiment with skilled craftsmen. As commandant, CAPT Moffett controlled the initial assignment of the thousands of recruits arriving at the station. Carpenters, electricians, boilermen, plumbers, surveyors and others possessing construction skills were assigned to the 12th Regiment.  Smith, meanwhile, contacted and interviewed professional engineers and journeymen for commissions or petty officer ratings. Several engineers selected by Smith made careers in the Civil Engineer Corps.

In mid-1917 CDR George A. McKay, CEC, USN, relieved CDR Smith as Public Works Officer. Smith became Public Works Officer of the Naval Station, Charleston, South Carolina, where he utilized the same recruiting methods developed at Great Lakes to augment his meager public works staff .CDR McKay proved an excellent choice for Smith’s replacement as he had been the engineer who oversaw the original construction of the Great Lakes naval station.

McKay added his own refinements to the 12th Regiment's organization. McKay would subsequently serve two tours as Assistant Chief of the Bureau of Yards and Docks (1923-1926 and 1930-1934).

During 1917, the 12th Regiment provided a needed military supplement to the numerous private contractors hired to accomplish the station's plant expansion. The newly commissioned Civil Engineer Corps officers, selected by CDR Smith, oversaw contractor performance and also directed the efforts of the 12th Regiment's skilled craftsmen. As the training center rapidly expanded, detachments from the 12th Regiment were sent to specified camp areas to serve as public works maintenance crews. The bond between Civil Engineer Corps officers and skilled construction workers that would serve so well in a later war was acknowledged by the Civil Engineer Corps emblem that enlisted personnel of the regiment wore on the lower left sleeve of their uniform. Nevertheless, the regiment was not a formally established construction unit, it was an ad hoc unit formed for a particular purpose at Great Lakes.

The 12th Regiment reached its fullest development under McKay's successor. In December 1917 CDR Walter H. Allen, CEC, USN, relieved CDR McKay as Public Works Officer at Great Lakes. CDR Allen, like his predecessors, realized the advantage of a Navy construction force. As mentioned above, Civil Engineer Corps officers did not exercise military command of the regiment, but only technical control during actual work periods. Discipline, administration, military training, and personnel support matters were handled by the unit's commanding officer who was a line officer.

Some naval officers were critical of the 12th Regiment, maintaining that the unit skimmed off valuable artisans for Great Lakes' use at the expense of fleet needs. This, however, was an unfair judgment. The 12th Regiment, like the other 11 regiments, was formed to furnish trained personnel for overall Navy use. However, unlike the other regiments, the 12th Regiment performed its public works mission during daylight working hours and engaged in military training late in the day and in the evenings. In short, the regiment's personnel forewent both leave and liberty to accomplish both operational public works assignments and training assignments.  Many of the regiments personnel had ratings required by the fleet and were used to fill ship-crew requirements in the same fashion as their counterparts in the other regiments.

But it was not just for ship-crews that the 12th Regiment provided skilled workmen. Having received a request for 200 men to construct air stations in France, CAPT Moffett responded with an offer of 500 men in an organized unit of officers, petty officers, and seamen. Later, the regiment supplied a force of steelworkers and electricians for constructing the tallest radio towers of the time (820 feet tall) on French soil.

During the war, the Naval Station at Great Lakes expanded to include nine satellite camps   named after naval heroes. These were independent facilities containing frame barracks, drill and recreation halls, steam plants, and administration and support facilities. One of these, Camp Paul Jones was unique in that it had been entirely built by its own occupants, the men of the 12th Regiment.

In August 1918 CAPT Moffett was able to report to the Navy Department that his station could now accommodate 50,000 men, and during the summer months an additional 10,000 could be housed in tent cities. In just 16 months obscure Great Lakes had become the nation's major naval training and processing center. The expansion had been carried out under 78 separate contracts at a cost of $17 million plus the not inconsiderable effort of the 12th Regiment.

Benefitting from his predecessors' work, CDR Allen perhaps best recognized the potential usefulness of a Navy construction force. Under his initiative, the regiment became involved in matters reminiscent of the later Seabees. CDR Allen sent an "expedition" to rehabilitate and construct barracks for a patrol force located on the St. Claire River Flats Canal in lower Michigan. The construction group camped on-site, completed its mission, and returned to its “homeport” at Great Lakes. Another special unit was created in anticipation of heavy Mississippi River flooding, much the same as the disaster relief teams of modern Seabees. CDR Allen also reported with pride that regimental personnel delivered 30 to 40 trucks from Michigan manufacturers to the Navy in New York, “a distance of 800 miles and completed in five days.” Finally, CDR Allen said that “...perhaps the best known of special drafts from the Twelfth Regiment was the railroad party that assembled and operated the trains for fourteen-inch naval guns that did such good work on the battle line in France.”

Nevertheless, the 12th Regiment (Public Works) remained an ad hoc unit formed to resolve a temporary problem. Following the armistice in 1918, the regiment was disestablished. CDR Allen, however, continued to praise the regiment and the value of its underlying concept -- that of a naval construction force. He wrote a detailed account of the regiment's activities which was published in U.S. Naval Institute's Proceedings in 1921. In this article, he particularly expressed the hope that similar units could be formed for future war emergencies and could be used both at home and overseas.

During the 1920s and 1930s the term "construction battalion" appeared in the war plans of the Bureau of Yards of Docks and probably originated with CDR McKay. Norman Smith became Chief of the Bureau in 1933 and probably, given his experience with 12th Regiment, favored the construction force concept as a mobilization contingency. Allen, now a captain, also served in Bureau headquarters in Washington during the 1930s and, in fact, both he and McKay were involved in formulating the Bureau's war plans. Allen was subsequently sent to oversee construction at the Naval Air Station, Sunnyvale, California, which was soon to named "Moffett Field" after RADM Moffett who died aboard the airship AKRON when it plunged into the Atlantic in 1933. Allen, himself, died of a heart attack in 1938. Thus, he did not live to see the creation of the Seabees in the opening days of World War II.

William A. Moffett, Norman M. Smith, George A. McKay, and Walter H. Allen individually and collectively conceived of and organized the 12th Regiment (Public Works) which was unquestionably the forerunner of the Seabees. These men were the prophets of the Naval Construction Force; however, it would take another man, ADM Ben Moreell, and another war, to make such a force a reality.