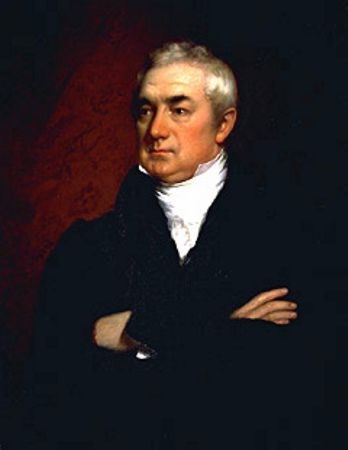 Although Latrobe produced development plans for navy yards at New York and Norfolk, none was built until years after his death. Finally, in 1826 Congress passed and President John Quincy Adams signed a resolution calling for the construction of two dry docks, one at Boston and the other at Norfolk. Loammi Baldwin, a noted Boston engineer, was selected to design and construct the dry docks.

Baldwin was born in North Woburn, Massachusetts, and was descended from Deacon Henry Baldwin, an original settler of the town. He was the third son of Loammi Baldwin (1744-1807} who had commanded the main guard of Washington's Army during the retreat from Delaware and the attack on Trenton.

Following his preparatory education at Westford Academy, the younger Baldwin attended Harvard and graduated from there in 1800. Baldwin demonstrated mechanical aptitude early on and in 1802 designed and built the first fire engine of Groton, Massachusetts; this engine remained in use for more than 80 years. In 1804 Baldwin was admitted to the bar and practiced law for the next three years. In 1807 he gave up law and went into public works construction, a career he followed for the rest of his life.

During this period he was referred to as the "Superintendent of dry-docks and inspector of navy yards." In an era when tools and equipment were relatively primitive (pile drivers were operated by men walking on treadmills), the construction of the new dry docks constituted large-scale projects of some difficulty. While construction went forward at Boston and Norfolk, Baldwin surveyed New York harbor for a third dry dock which was not built until after his death.

Following his work for the Navy, Baldwin prepared reports on the freshwater supply of Boston and the Brunswick canal and railroad system. He became a Presidential elector for Massachusetts in 1836 and died in 1838.

Although they built the Navy's first major shore facilities, neither Latrobe nor Baldwin were career Navy civilian employees; the concept hardly existed at that time. Both men were hired to carry out specific engineering projects for the Navy and when the projects were completed, both left the Navy's employ. During the first three decades of the Nineteenth Century the Navy Department did not have any full-time civil engineering support. Nevertheless, the man who would be the Navy's first full-time civilian civil engineer as well as, many years later, the first Civil Engineer Corps officer was already on the Navy payroll in 1829.