The U.S. Navy Seabee Museum is temporarily closed to the public until at least August 1. To prevent congregations of large groups of people, the closure is a precautionary measure to mitigate the spread of coronavirus, COVID-19. Museum staff will continue to report to work or telework and be available to assist researchers and the general public with questions at: SeabeeMuseumVisitor@navy.mil or call 805-982-5165. If you have a research question, please email SeabeeMuseumArchive@navy.mil. If you wish to make a donation, please email SeabeeMuseumCollections@navy.mil.
[X]
Share
Connect
Research
»
Civil Engineer Corps History
»
1898: The Civil Engineer Corps takes charge
Tags
Related Content
Topic
Document Type
Wars & Conflicts
Navy Communities
File Formats
Location of Archival Materials
Author Name
Place of Event
Recipient Name 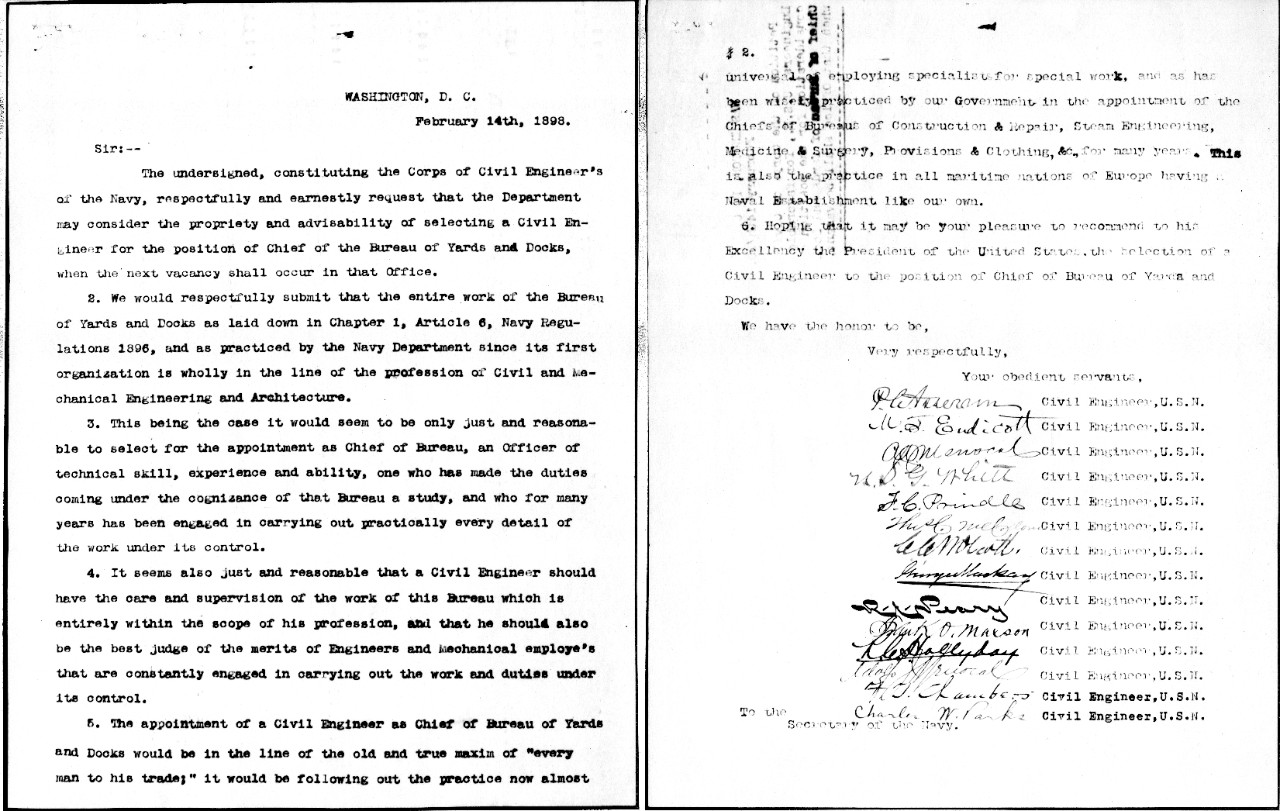 Letter to SECNAV requesting a Civil Engineer Corps officer be selected as Chief of the Bureau of Yards and Docks, 14 February 1898.

Although finally granted relative rank and a uniform in 1881, Civil Engineer Corps officers still reported to a line officer who was Chief of the Bureau of Yards and Docks. This remained the case even though Congress had ruled as early as 1871 that staff officers holding the relative rank of captain could be appointed bureau chiefs.

In June 1881, two months after the attorney general made his definitive ruling that Navy civil engineers comprised a staff corps and were Navy officers, COMO Richard L. Law, USN, completed his tour as Chief of the Bureau of Yards and Docks. However, the act of 1871 apparently had no effect on the choice of his replacement because another line officer, RADM Edward T. Nichols, USN, was selected to succeed him.

On 27 November 1882 the ten officers comprising the Civil Engineer Corps, in a highly unusual and unprecedented move, directly petitioned the Secretary of the Navy for redress. The lengthy petition made certain specific points: (1) Civil Engineer Corps officers were recognized Navy officers with relative rank and were fully eligible under the law for appointment as chief of their own bureau, (2) all other bureaus had a professional head appointed from the corresponding staff corps, and {3) because the Chief of the Bureau of Yards and Docks was not an engineer, he lacked the necessary qualifications "requisite for the proper and intelligent discharge of the important duties pertaining to the supervision and direction of the design, construction, repair and maintenance of all the important public work comprising the Navy Yards, which come under the cognizance of this Bureau, and is the legitimate work of this staff corps of the Navy."

The Office of the Secretary of the Navy received the petition on 1 December 1882 and later that month Secretary Chandler sent an official reply to Civil Engineer (CAPT) Peter Asserson, the senior Civil Engineer Corps officer, in which he said that the matter would be given due consideration. Unfortunately, RADM Nichols's reaction to this extraordinary petition went unrecorded.

The matter was duly considered; however, that consideration continued for the next fifteen years and four more line officers were successively appointed as Chief of the Bureau of Yards and Docks.  The senior Civil Engineer Corps officer simply served at Bureau Headquarters as "engineering consultant" to the Chief.

Finally, when RADM Edmund 0. Matthews, USN, completed his term as chief in March 1898, Civil Engineer Peter C. Asserson, USN, still the Navy's senior Civil Engineer Corps officer, was asked to become chief of the bureau. This was probably done because the increasing tensions between the U.S. and Spain made the government think that a professional engineer should be at the bureau's helm.

Asserson, however, declined the appointment because he was almost 60 and would have to retire before completing his term as chief. Next in line after Asserson was the very competent Civil Engineer Mordecai T. Endicott, USN, holding relative rank as a commander. Endicott was promoted to the relative rank of captain so that he would be eligible for the post, and on 4 April 1898 as appointed chief.  This was a satisfying moment for the ten officers then comprising the corps for eight of them, including Asserson and Endicott, had signed the petition of 1882. The Civil Engineer Corps had finally gained control of its own organization, the Bureau of Yards and Docks.

Upon becoming Chief, Endicott was given the relative rank of commodore, the rank held temporarily by captains who were bureau chiefs. He thus became not only the first Civil Engineer Corps officer to be chief but also the first to attain flag rank. On 3 March 1899, as part of a major Navy reorganization, Congress abolished the one-star grade of commodore and created two pay-grades within the rank of rear admiral. As a result, Endicott also became the first Civil Engineer Corps officer to hold that rank. The same act abolished relative rank so that henceforth Endicott held actual rank as a rear admiral, although he could not be addressed as such. This distinction was eliminated in 1918 when henceforth all officers, both line and staff, were to be addressed by their actual ranks.