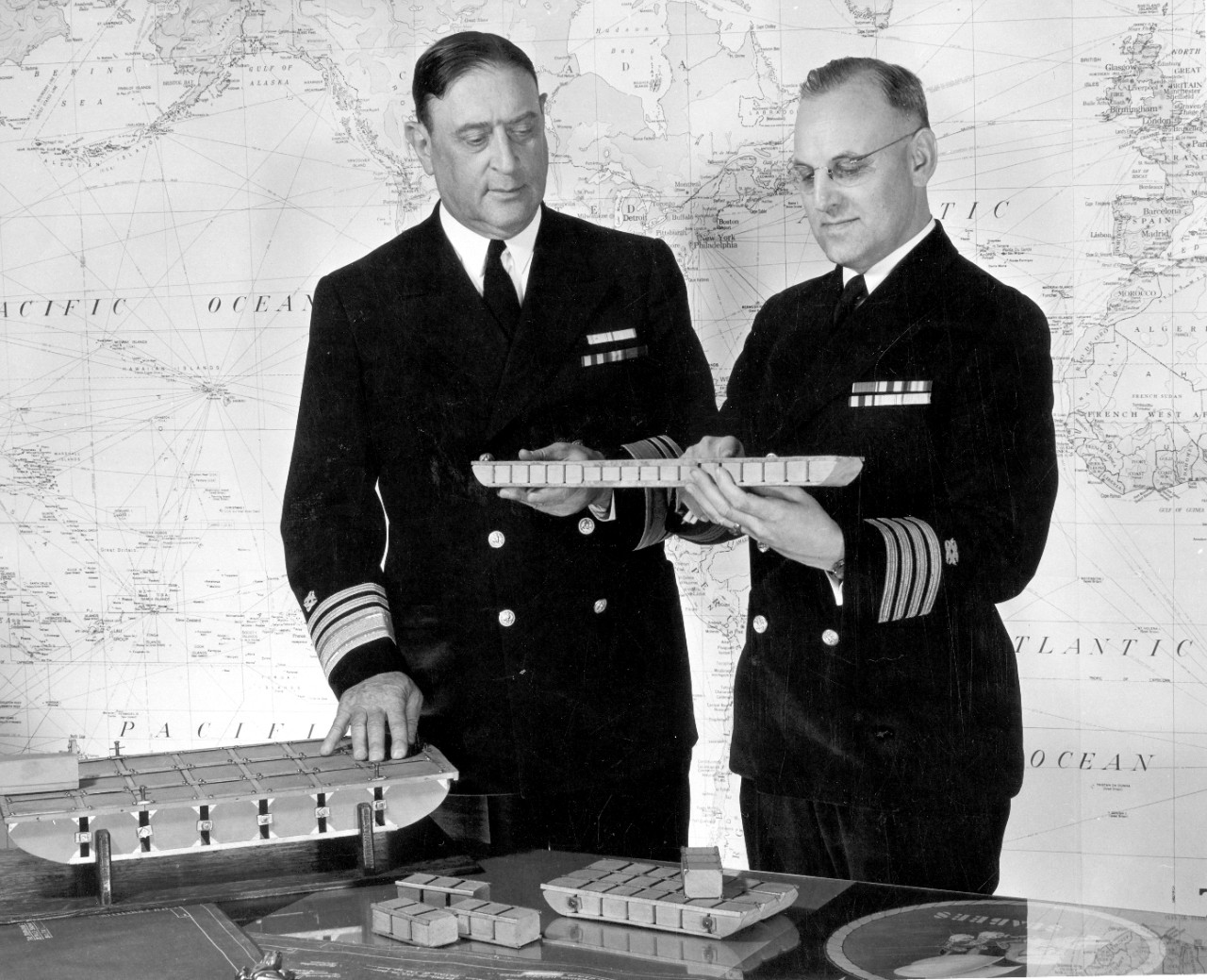 CAPT John Laycock was not a flamboyant officer like CAPT Painter; nevertheless, he made a contribution to the war effort that was of the greatest significance.

John N. Laycock was born in Methuen, Massachusetts on 18 May 1892; he attended primary and secondary school in that city and was subsequently appointed to the Naval Academy in  1910. He graduated in 1914 and then served aboard the battleship USS VIRGINIA. His ship was at Vera Cruz, Mexico, during the occupation of July-December 1914. Following his tour with the VIRGINIA, ENS Laycock began postgraduate work at Rensselaer Polytechnic Institute and received a bachelor of engineering degree in 1917. On 6 June 1917 he was promoted to lieutenant, junior grade, and transferred to the Civil Engineer Corps.

During the 1920s Laycock's career was much like that of his fellows; between 1917 and 1927 he performed public works functions at the Naval Air Station, Cape May, New Jersey; the Navy Yard, Charleston, South Carolina; the Fifteenth Naval District (Canal Zone); and the Naval Station, Newport, Rhode Island. In 1927, the President nominated Laycock, now a lieutenant commander, as Treaty Engineer of the Republic of Haiti and the President of Haiti appointed him as such. In this position, LCDR Laycock served as Director of Municipal Engineering from 1927 to 1928, and as Executive Officer of the Public Works Administration of the Republic of Haiti from 1928 to 1931. Laycock was the last such Treaty Engineer and was made a Commander of the Order of Honor and Merit by the Haitian government for his services.

From 1934 to 1937 Laycock served at the Boston Navy Yard and later became its Public Works Officer as well as that of the First Naval District. In 1934 he was promoted to Commander and in 1937 became Public Works Officer of the Portsmouth Navy Yard in New Hampshire. While in New Hampshire CDR Laycock was beset by health problems to such an extent that RADM Moreell decided to transfer him to Bureau of Yards and Docks headquarters in Washington, DC. Laycock was to become War Plans Officers, a position considered less strenuous, albeit one with less responsibility, than that of Public Works Officer at Portsmouth. It was in his new position that Laycock made his great contribution to Allied victory during World War II.

CDR Laycock reported to the Bureau of Yards and Docks in March 1939 after a period of recuperation from his health problems. As War Plans Officer, Laycock inherited a file full of material relating to the development of advance base facilities and amphibious equipment composed of pontoon sections. Laycock gave special attention to the material on pontoons  which dated back to 1933 and addressed the problems inherent in transporting them in amphibious operations. The concept of a uniform pontoon which could be configured in various assemblies was originally developed as early as 1933 and 1934 by the then War Plans Officer, CAPT Carl A. Carlson, CEC, USN, and his staff. This material was later supplemented by proposals received in 1935 and 1936 from a LCDR Paul W. Hains, CC, USN, an officer in the Bureau of Construction and Repair, which called for bolting steel pontoons together with fasteners through the pontoon walls. Hains's concept was based on a sectional steel barge which was under construction at the time for the Navy.

Laycock discarded the fastenings proposed by Hains, deciding that they were too slow and unsafe and did not provide necessary unit strength to the pontoons so joined. He wanted to develop a fastening system that provided strength, durability, and ease of assembly using simple tools. Laycock used cigar boxes to create model pontoon assemblies. He discovered that if he assembled the cigar boxes with kite sticks across the joints he could produce a rigid structure without putting excessive strain on the individual fastenings. Assisted by a civilian employee, he next developed a system of fastenings and long steel bars to be used on full-sized pontoons.

Having developed an effective fastening system, Laycock turned to the pontoons themselves. Calculating for maximum efficiency, he developed a standard five by five by seven foot steel pontoon and various pontoon assemblies that could be made from it. The pontoon so developed would become own as the NL or "Naval Landing" pontoon. On 18 February 1941 contracts were awarded to the Pittsburgh-Des Moines Steel Corporation for construction of three experimental assemblies: a 50-foot barge, a 100-ton dry dock, and a seaplane ramp. Following successful  tests of the completed assemblies, the Navy ordered 3,000 pontoon units. As pontoon development became a major effort, a Pontoon Experimental Area, was established at Quonset Point, Rhode Island, where assemblies could be tested under something approaching field conditions. The training of pontoon crews also commenced at Allens Harbor, adjacent to the Advanced Base Depot, Davisville, Rhode Island. This training took place under the direction of LCDR Harold T. Sylvester, CEC, USN, who would later command the "Bobcats," the first Seabee unit to actually deploy.

Laycock was promoted to Captain in January 1942 and, following the British getting wind of U.S. pontoon development, found himself in conference with Prime Minister Winston Churchill. Churchill was interested in the feasibility of building pontoon landing fields for use in the Indian Ocean. In fact, such a floating airfield was constructed as an experiment in Narragansett Bay; it was 1,800 feet long and 175 feet wide. During testing, planes were successfully landed on, and flown off it. Nevertheless, it was decided that air operations off it were not feasible in waters  more turbulent than those of Narragansett Bay. The experimental floating airfield was subsequently dismantled.

Meanwhile, pontoon assemblies of a more mundane nature were deployed to the operating forces. Certain Seabee units, notably Naval Construction Battalion 70 and its daughter detachments, became pontoon specialists who directly participated in amphibious landings. In addition, special Seabee Pontoon Assembly Detachments were formed to assemble and operate the different types of pontoon assemblies. After taking North Africa, the Allies moved on to Sicily, the assault of which presented special problems. Because of the shallowness of the waters off the selected landing sites, LSTs could approach no closer than 300 feet, yet existing pontoon causeway assemblies could only bridge a 175-foot gap. Working with Royal Navy Captain T. A. Hussey, CAPT Laycock hit upon the solution of using two such causeways slightly overlapped at the joining point, thus producing a causeway 350 feet in length -- enough to reach from the LSTs to the beach and make the landing in Sicily possible.

Following the Italian campaign landings, planning began for landings on the coast of Normandy. Because of tidal forces, it was inadvisable to beach the LSTs at the closest point of approach as was done in Sicily. It was necessary to develop a way to unload LSTs while they were still afloat. To meet this need, Laycock and his team developed the “rhino” ferry, a self-propelled pontoon barge which transported cargo from a moored LST to shore. CAPT Laycock and his fellow researchers also conceived the idea of using sunken ships as a breakwater to create an artificial harbor at Omaha Beach. In addition, they developed floating wharves attached to causeways running to shore at which ships could be unloaded, sunken causeways, and warping tugs made out of pontoon assemblies. The creative use of pontoon assemblies and artificial breakwaters made possible the Normandy invasion.

Unfortunately, CAPT Laycock's health problems recurred during the war and forced his retirement from active duty on 1 March 1945. He was, however, still employed as an advisor and, in that capacity, even traveled to the Pontoon Proving Grounds at Davisville to oversee testing.

For his contribution to the war effort, CAPT Laycock was awarded the Legion of Merit and a Gold Star in lieu of a second Legion of Merit. Although CAPT Laycock spent the war in a desk job that he was given for health reason, he managed to assure himself a place in military history. Starting with an old file folder of pontoon assembly concepts, CAPT Laycock oversaw and  directly participated in the development of whole systems of pontoon assemblies that were crucial for the success of the amphibious warfare that was so much a part of World War II. Without Laycock's managerial and inventive genius the course of the war may well have been different and certainly the number of casualties sustained by the Allies during amphibious operations would have been much higher, perhaps so high that many of the most critical of these operations would not have been undertaken at all. CAPT Laycock's accomplishment in taking an idea and making it into reality cannot be underrated.

CAPT John N. Laycock died in 1969, having lived long enough to see the pontoon assembly concepts that he perfected during the war employed throughout the world in numerous civilian applications.