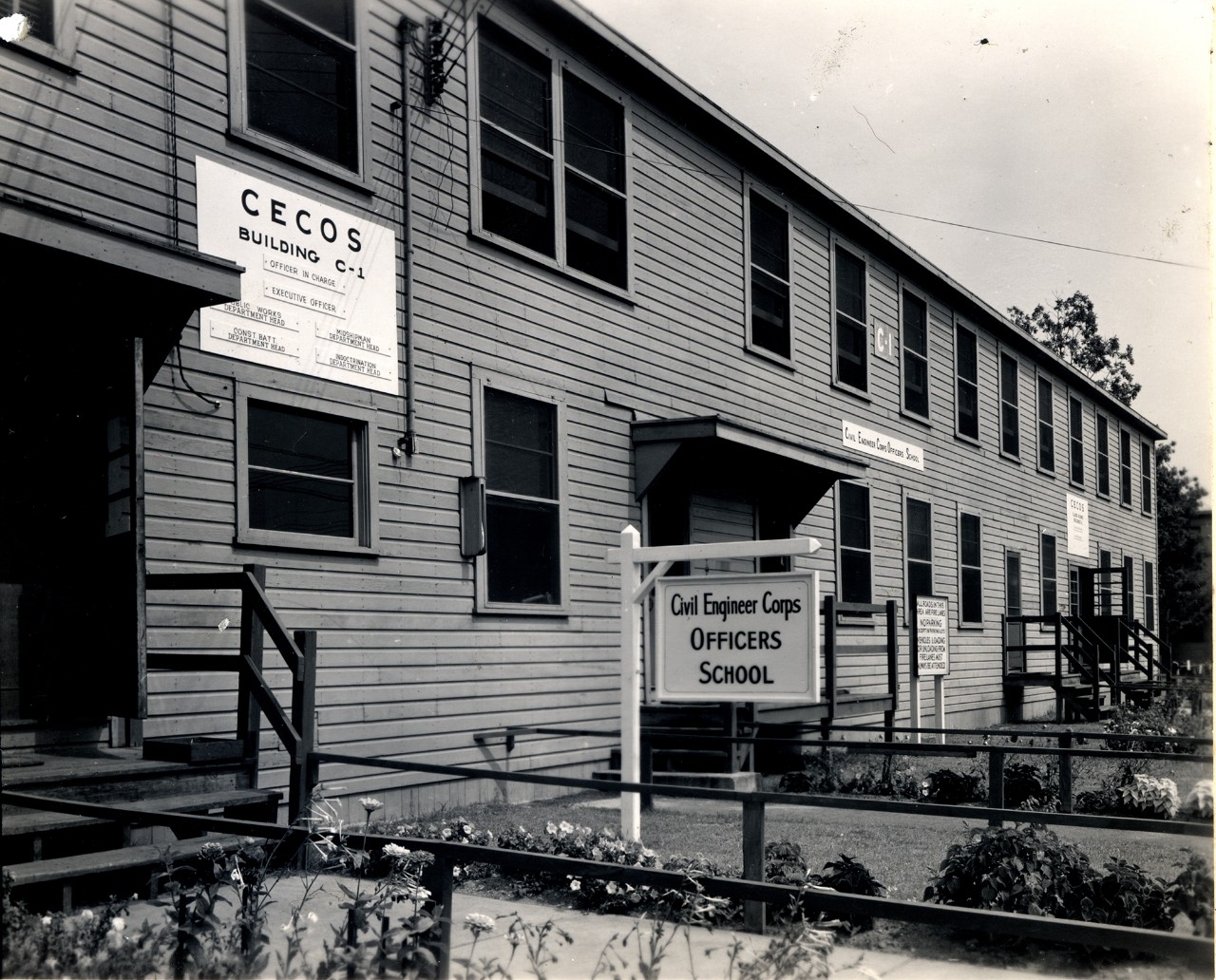 On May 1, 1945, the U.S. Naval Civil Engineer Corps Officers School, better known as CECOS was formally established in Davisville, Rhode Island.  The history of CECOS began early in 1942, when an officer’s indoctrination and training course was instituted as Camp Allen, Norfolk, Virginia to meet the demand for trained officers during World War II.  In February 1943, all Civil Engineer Corps (CEC) and Seabee training was moved to Camp Peary, Williamsburg, Virginia.  Shortly thereafter, in May 1943, a Navy Public Works training course was established for officers in Norfolk.

The expanding war demanded more and more officers, particularly CEC officers, to head the hundreds of Seabee units.  Consequently, in order to expand and consolidate the training program, the training school was moved to Camp Endicott, Davisville, Rhode Island in May 1944.  The officers Public Works training course transferred from Norfolk to Davisville in May 1945 and, for the first time, all CEC training was put in a single school, under one roof.  This consolidation marked the true founding of CECOS. 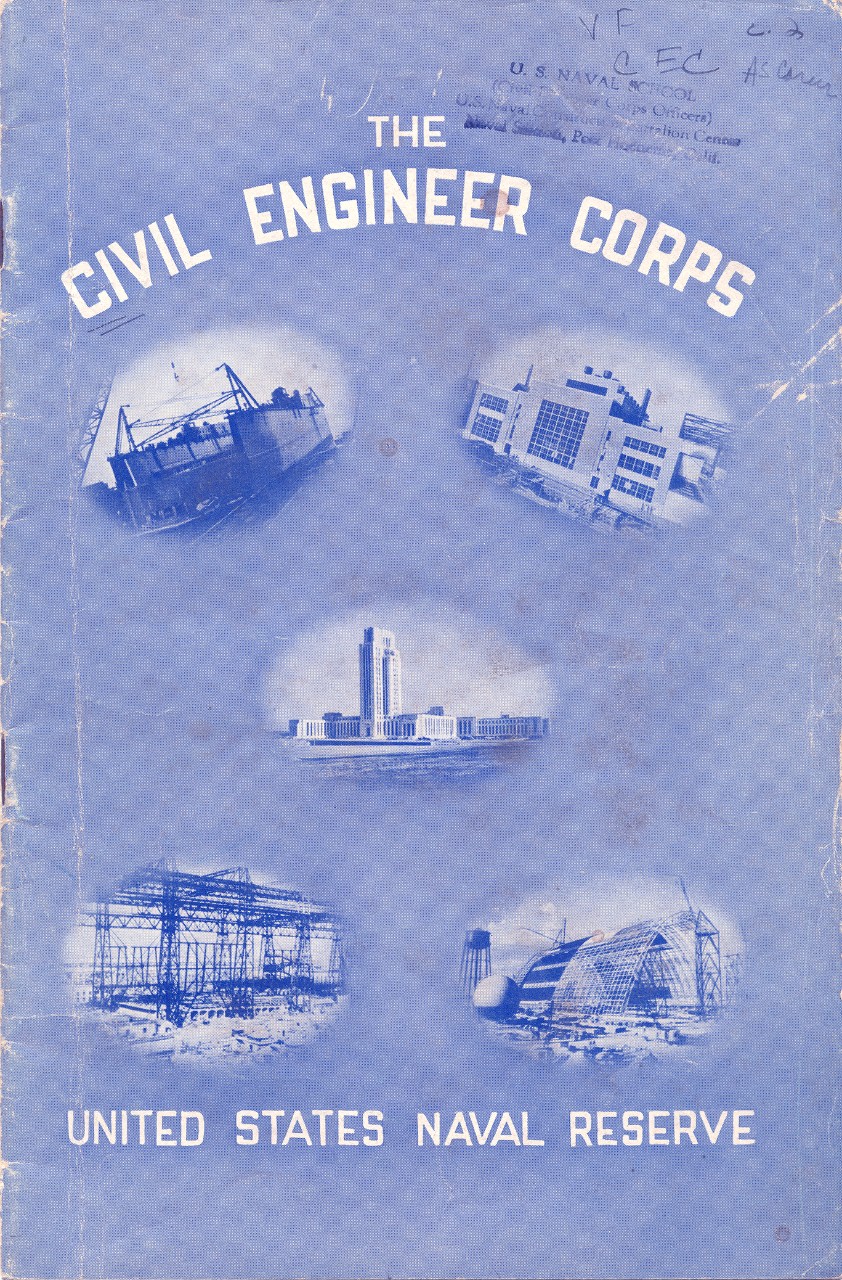 The catalog of information for CECOS, July 1958 to June 1959, which includes CO, staff and faculty bios, mission, basic base information and a description and schedule of each course.

CECOS opened under the Bureau of Naval Personnel with a staff complement of 105 officers and 207 enlisted personnel to assist in the administrative operations of the school.  Four instruction departments were created: public works, construction battalions, midshipmen, and indoctrination.

By mid-July 1945, the projected demands of Japanese conquest caused enrollment to peak with a steady flow of newly commissioned CEC officers, experienced officers rescheduled for refresher training in new duties and special courses in military government, transportation and logistics.  However, shortly after its establishment, just as CECOS reached its zenith, its staff and enrollment all but vanished following the rapid demobilization of the armed forces after the cataclysmic end of World War II. After the war, although CECOS maintained its training courses, the staff fell from 105 to 15 officers with only a handful of enlisted personnel and thirty civilian employees.

CECOS and its predecessor training units had reacted well with responsive, innovative and professional instruction.  The Civil Engineer Corps had grown from a mere 159 officers in 1941 to its peak of 10,186 at the close of World War II.  Of these numbers, an estimated 85% had attended a CEC training course.  The Civil Engineer Corps had become firmly established as a naval entity with command precedence and authority during the war, not just a technical staff, which had been its prior position.

The school relocated from Davisville to Port Hueneme, California, effective September 1, 1946, where it was formally established as United States Naval School, Civil Engineer Corps Officers.  The staff started to assemble at Port Hueneme in December 1946 and was all on board by February 1947.  The staff consisted of four CEC officers, four civilian instructors, a librarian, an illustrator and a clerical force of three civilians. 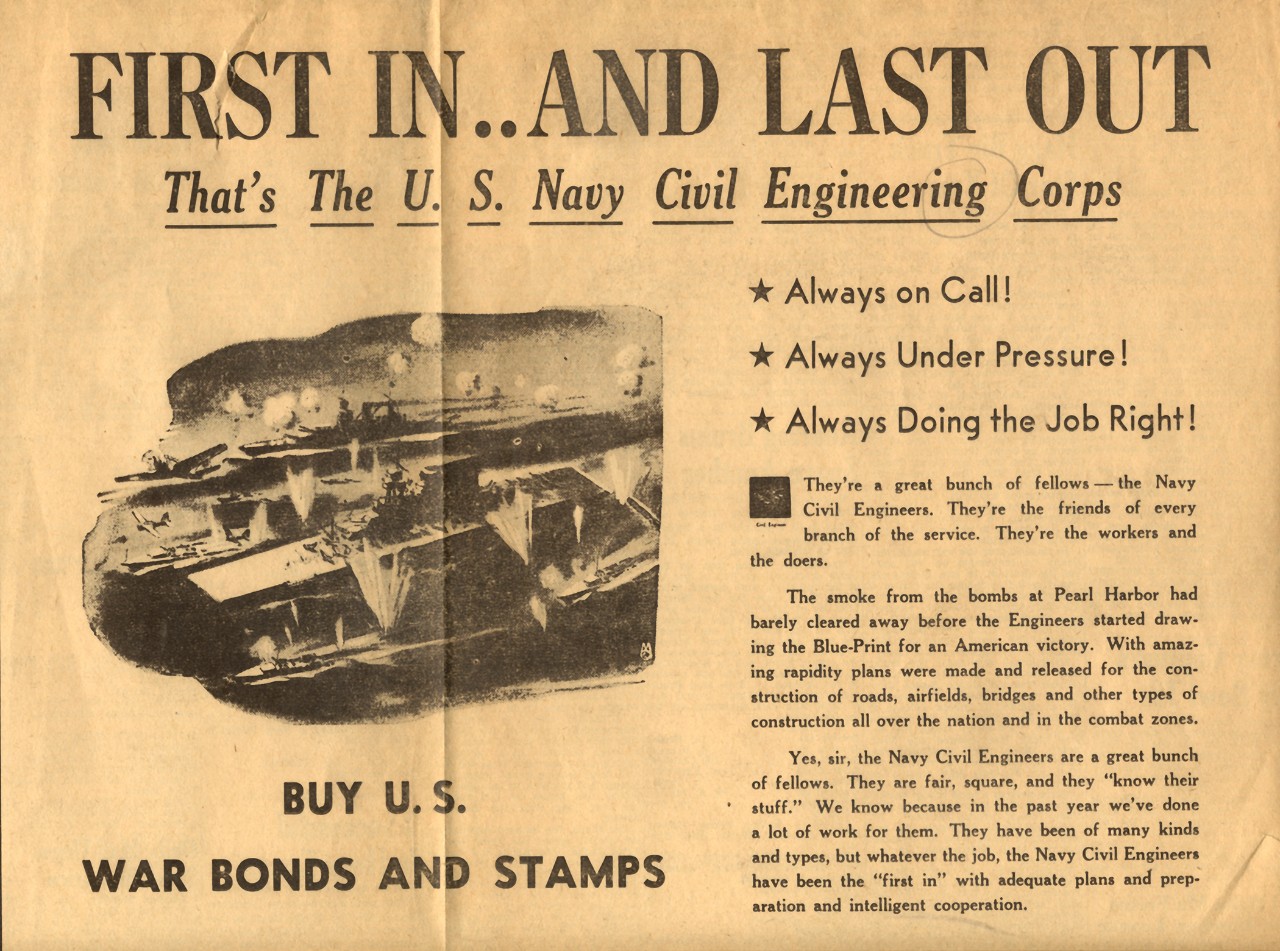 Since that time, the school has steadily updated and improved its curriculum. In 1949, a new course in disaster relief engineering emerged, which encompassed both thermonuclear and natural disasters.  CECOS expanded its scope in 1968, by introducing a six-week course of instruction for senior and master chief petty officers (E-8, E-9).  This course was designed to assist these senior enlisted men to fill the important middle management roles in naval construction administration.  The course was so well received by students that another course was added for middle echelon petty officers (E-6, E-7).

In the 1970’s, in response to contemporary domestic problems, CECOS designed a three-day course on energy management to provide the students with conservation techniques and efficient uses of energy sources.  Simultaneously, a course in environmental protection was created, which outlined policies and actions to prevent pollution and damage in areas either under or adjacent to Navy control. 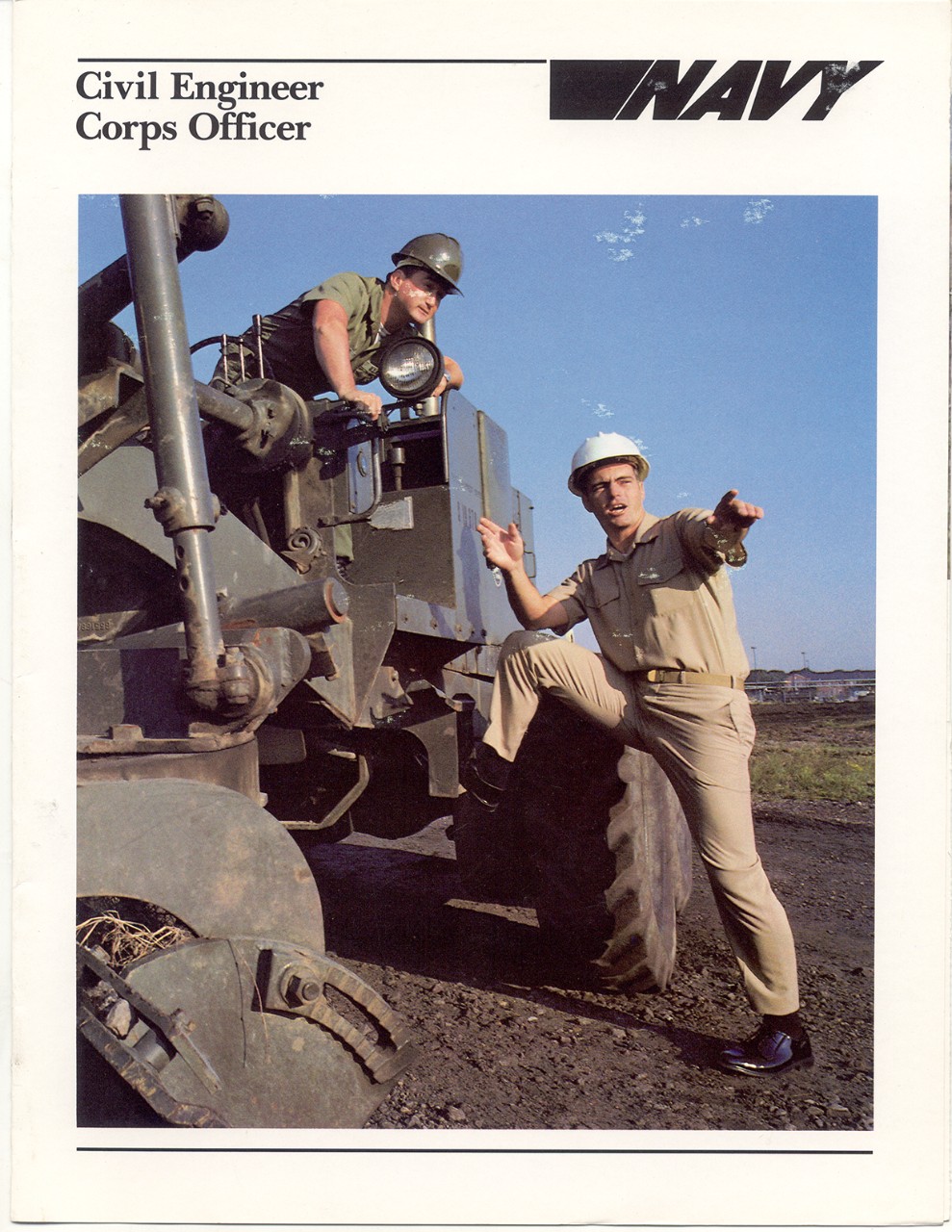 Bureau of Personnel recruiting brochure for the Civil Engineer Corps, circa 1970s.

Another facet of the school’s function is to train officers of allied nations.  The school began training officers of other nations under the Military Assistance Program (MAP) on August 23, 1959, when it accepted a handful of officers from the Republic of China, South Korea, Turkey, Japan and Great Britain.  The program was begun to help other nations develop their naval training programs and to work more closely with the U.S. Navy.  The course taught the men modern techniques of shore establishment maintenance.

In the 1980’s, foreign officers under the Mutual Defense Assistance Plan (MDAP), from Chinese, South Korean, Philippine, Iranian and Thai navies, underwent instruction and graduated from CECOS.  They were enrolled in both the Basic CEC Officer course and several select CECOS courses.

In addition to CEC officers and foreign military students, CECOS also enrolls other Navy and Armed Forces personnel, Department of Defense and other government civilians and contractors, as well as naval reserve personnel on active duty for training.  CECOS offers over 50 different courses with over 250 annual course offerings.  Many of these courses are taught via Mobile Training Teams that provide cost effective training by taking the instruction to the students vice the students coming to Port Hueneme.

Most CEC officers attend the school at some time in their careers, usually at the outset of their careers.  CECOS provides new officers with basic orientation and training for their first tours of duty.  These officers are newly graduated engineers and architects who are joining the Navy from engineering schools around the country through OCS, NROTC programs, Naval Academy graduates, direct appointments, or by transfer from various line communities in the Navy.

After more than 70 years of successful operation and thousands of students later, CECOS is going stronger than ever. In 1990, CECOS moved from their original World War II barracks-style facility into Moreell Hall, a 68,000 square foot state-of-the-art training facility. In 1995, CECOS began an online distance-training program, which has since grown to include 18 different training products now available through Navy E-Learning via the Navy Knowledge Online (NKO) portal. Several other computer based training products are slated for conversion to NKO over the next few years. These distance-learning programs are a cost effective, efficient way to deliver course materials to Naval and DoD military and civilian personnel worldwide. The CECOS programs continue to develop and grow as all aspects of civil engineering and military readiness evolve. CECOS remains an institute as relevant to the Navy today as it was back in its beginning during WWII.