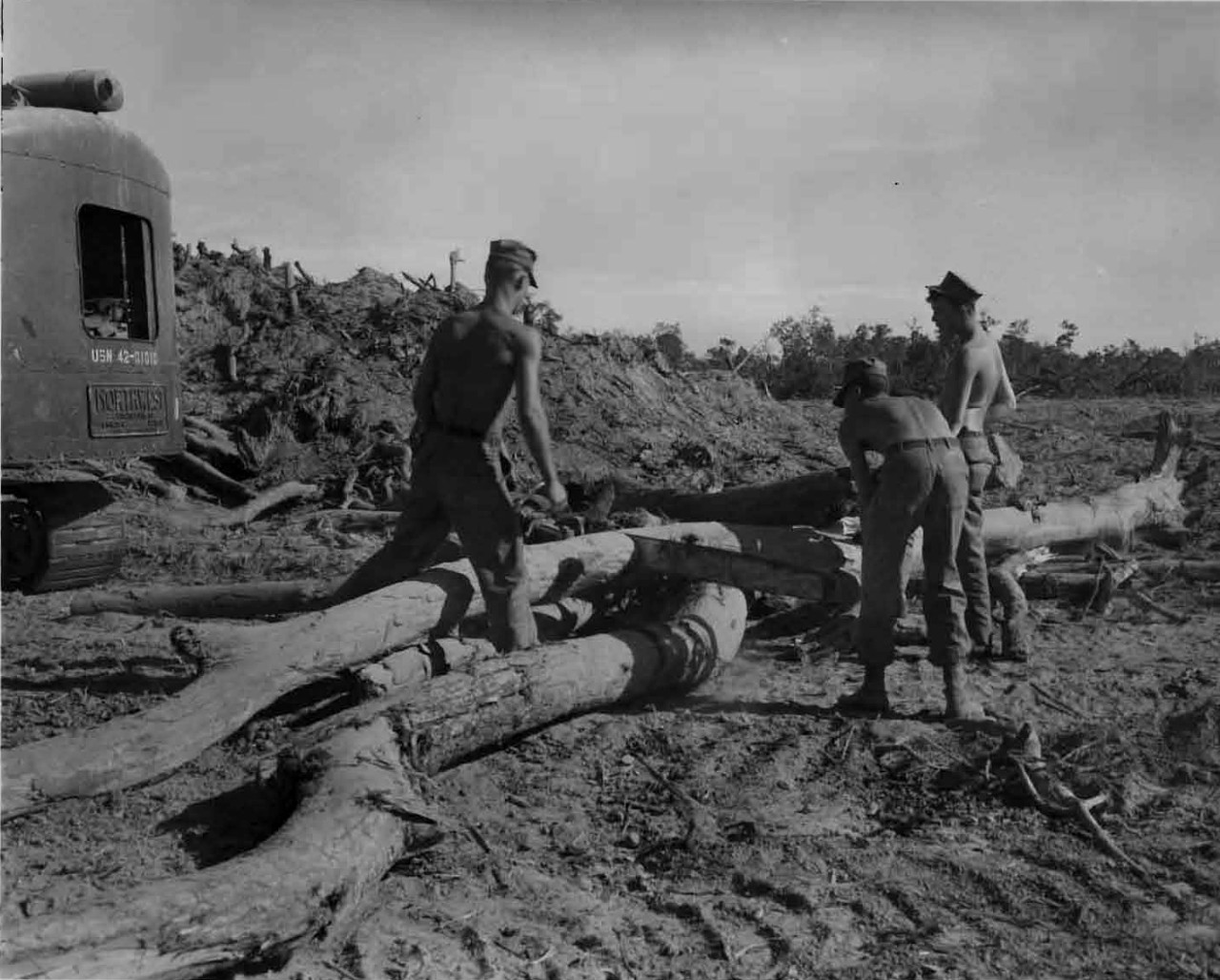 Caption: Seabees with NMCB-3 in Nakhon Phanom clearing trees before construction of airfield can begin.

In mid-1962, to block further Communist gains in Southeast Asia and keep the civil wars in Laos, Cambodia, and Vietnam from reaching full-scale status, Thailand and the US agreed to build air bases along the Laotian/Thailand border. As part of a Military Assistance Program (MAP) funded project, the Secretary of Defense authorized construction of an airfield in Nakhon Phanom to improve logistic capabilities in Thailand.

In August 1962, a reconnaissance team from NMCB-3 deployed to Thailand to meet the design agency from the Officer-in-Charge-of Construction Southeast Asia (OICC SEA) and Commander Joint Task Force 116 (CJTF 116) to discuss the project. The main project was to build an air base on the western edge of Nakhon Phanom, Thailand, across the Mekong River from Laos. The Laotian civil war initiated an agreement between Thailand, the US, and the Republic of Vietnam (RVN) to block Communist expansion into the rest of Southeast Asia. The air base location was chosen to support US and Thai forces in the struggle against Communist insurgents along the border.

The initial project included building an advance cargo airfield with lighting, taxiway, access roads, parking apron and marshalling area for the Royal Thai Air Force (RTAF) on the site of a small laterite airstrip within the town of Nakhon Phanom. Due to a consideration of engineering, tactical and acquisition factors, the reconnaissance team decided to use an undeveloped site just outside the town to build the new airfield.

NMCB-3 Detachment YANKEE was airlifted from Port Hueneme, CA to Udorn, Thailand in late August tasked to establish initial base operations and logistics, and clear the dense jungle growth. Shortly after arrival, Detachment YANKEE commenced to Nakhon Phanom to construct camp facilities and were later augmented by three officers and 78 men from the main body on 24 September.

The main body airlifted from Camp Kinser, Okinawa to Udorn, Thailand via Military Air Transport special mission flights from 3-5 November. The trip to Nakhon Phanom was its own version of “Planes, Trains, and Automobiles.” Equipment and materiel were moved from Okinawa to Bangkok by sealift and taken to Nakhon Phanom via a combination of airlift, rail and road convoy. The items unable to be shipped via rail or air due to size and/or weight were convoyed 580-miles from Bangkok to Nakhon Phanom over mostly unpaved roads. Considerable road repair and construction, as well as bridge reinforcement was necessary to convey the heavy construction equipment over roads created more for ox carts and pedestrians than D8H Crawler Tractors and P&H Mobile Cranes. Add in rain, malarial mosquitos, poisonous snakes, and the activities of Communist agitators crossing the border from Laos and you have the makings for a road trip from hell.

The campsite was located adjacent to the existing Nakhon Phanom airstrip and made available by the Thai government. Once all the heavy equipment arrived at the jobsite, the area was cleared of medium to dense vegetation. The Seabees had to excavate the silty topsoil and a deep layer of clay more than 6 feet deep in some places before replacing it with laterite. Once compacted, a sand and gravel base was spread before a coat of asphalt and finally M-6 pierced steel plank was placed over the runway, taxiway, and aprons.

Initial construction schedules projected a completion date of 15 May but due to lack of sufficient functioning earthmoving and compaction equipment the date was reset at 30 June. This date was predicated on the assumption that the monsoon rains, which usually began in mid-June would not arrive earlier or would build up gradually allowing earthwork operations to continue. Neither happened. Work continued until late May 1963 when monsoon rains forced the discontinuance of construction. The area received 36.7 inches of rain in June which was roughly twice the historic average making it impossible for them to complete any earthwork that month.

Airfield at Nakhon Phanom begins to take shape, May 1963.

Leadership approved a concept to redeploy the battalion to Port Hueneme during the monsoon season and return a detachment in October to finish the project. Once approved, the main body was moved by airlift on 2 July from Thailand to Okinawa where they boarded the USNS SULTAN on 7 July headed for Port Hueneme. On 2 July, Detachment WHISKEY was established leaving one officer and 34 enlisted men onsite to maintain and repair construction equipment and provide security pending the resumption of work in the fall after monsoon season ended.

In mid-October 1963, two officers and 150 enlisted men arrived to augment Detachment WHISKEY after several aborted flights, diverted aircraft, and mechanical difficulties. The detachment spent the next 8 weeks competing construction work on the airfield picking up where the main body left off at the onset of monsoon season.

Airfield at Nakhon Phanom, May 1963

The project was completed on 11 December 1963 and accepted on 13 December by a group from OICC Southeast Asia, Justice Military Assistance Group, and the Royal Thai Air Force. The main body of Detachment WHISKEY deployed to Okinawa two days later leaving a party of 38 men to complete camp roll-up and a party of 1 officer and 44 men to convoy heavy equipment to Bangkok and onto Okinawa. Detachment WHISKEY was officially disestablished on 6 January when the last group arrived in Okinawa.

The airfield, officially named Nakhon Phanom Royal Thai Air Force Base (NKP),  played a significant role in the war in Southeast Asia. Several US Air Force tactical squadrons and groups stationed at NKP conducted irregular warfare operations along the Ho Chi Minh Trail in Laos. Air Commando and Special Operations units operated out of NKP along with other clandestine organizations that used it as an operating base for missions in Laos, Cambodia, and North Vietnam. The base played a prominent role throughout the war, but it began with the steadfast and hard work of NMCB-3 on a empty field in Northeast Thailand in 1962.