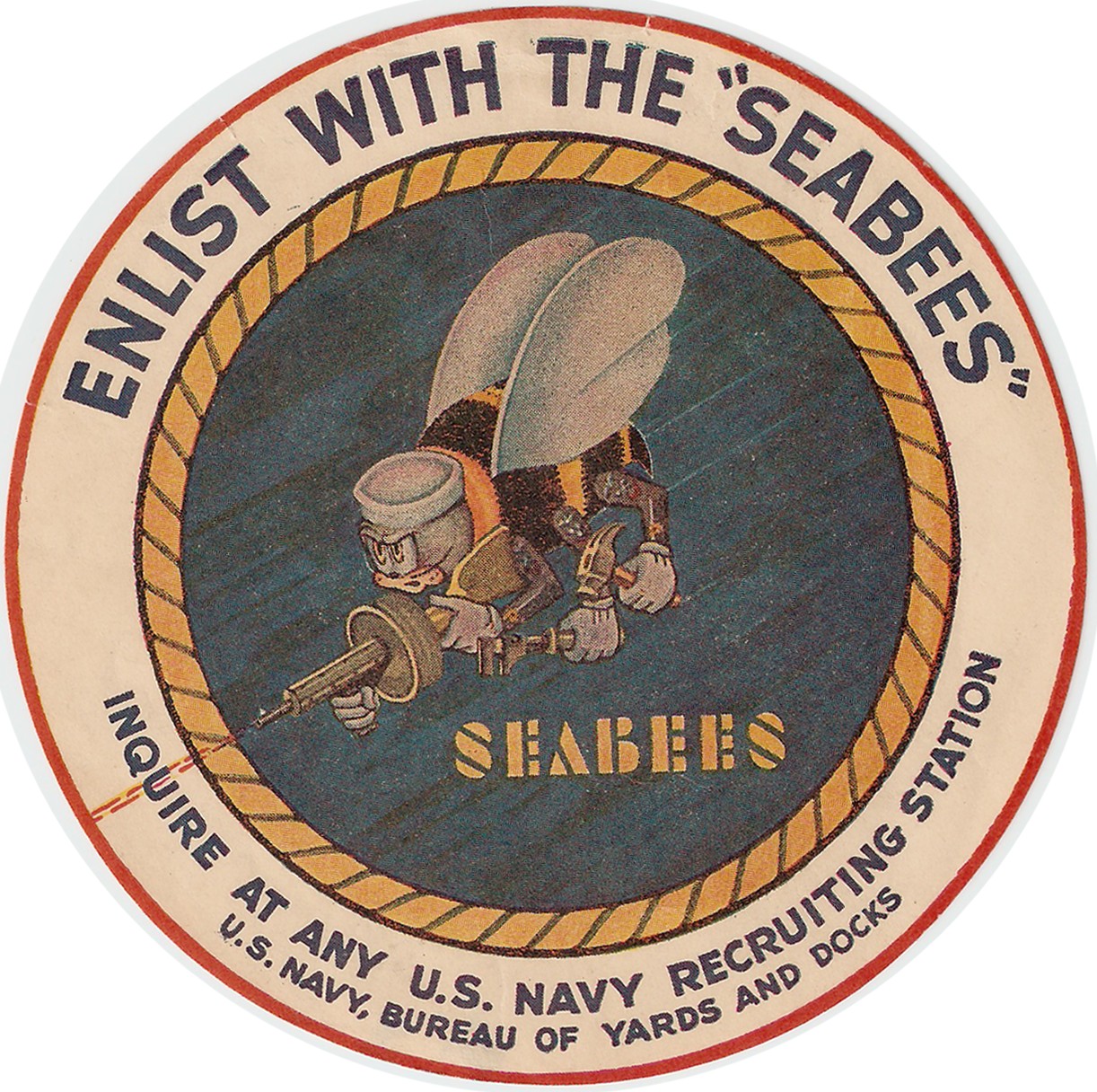 During the early part of 1942, Frank Iafrate, a clerk at the Naval Air Station Quonset Point, was approached by a LT Shilstone and asked to create an insignia for a group of 250 men he was in charge of. The group was a new special group of Navy men who were being trained by civilians in construction work and by Marines in military training. They were being referred to as Construction Battalion men.

Shilstone explained that his unit was one of four being trained separately to later be joined to form the First Naval Construction Battalion. These new units were designed to replace the civilian workers recently lost on Wake, Guam, and the Philippines. The would be used to build forward bases and go ashore in the second wave after the Marines. Their primary task included building airstrips, docks, roads, and advance bases but they would also be trained in military defense and be ready to fight and defend what they had built.

LT Shilstone was looking for a Disney like character for their insignia that might also have a name, which would be coined instead of the cumbersome Construction Battalion. Iafrate first thought of a beaver as the main character but soon discovered that while beavers are good workers, they lack courage and decent fighting abilities; so the beaver idea was discarded.

Iafrate later thought of a busy bee that works industriously and yet is capable of protecting his property when confronted by an enemy. He decided on a Navy white hat on an animated bee to make him strictly Navy; a hammer and wrench in his hands to show his construction abilities; and a sub-machine gun in his front “legs” to show his military powers. Iafrate designed the bee with a determined look on his face to show he quickly meant to do what he set out to do. Initially, the bee was set in a “Q” for Quonset Point but was later discarded.

At the time the insignia was designed only for the First Naval Construction Battalion and not for an entire branch of the Navy.  The new group also needed a name to go along with the new insignia. Iafrate thought the sketches of a bee in Navy gear reminded him of the sea and the main character was bee. Thus, a phonetic rendering of the initials “C” and “B” became Seabees that completed the final insignia.

The insignia, with the new name for the newly created Construction Battalions, was so widely accepted that it was sent to Rear Admiral Ben Moreell, Chief of the Bureau of Yards and Docks. By this time, the Bureau of Yards and Docks had already begun a recruiting drive for the 12 newly approved battalions. For the drive, they had decided to use another insignia showing a sailor, against a background shield of red, white, and blue, bare-chested, holding a sledgehammer in his hands and entitled Construimus Batmimus, USN.

However, once Iafrate’s bee arrived, the Bureau decided his insignia would have more recruiting appeal and chose it to be the official insignia for all the battalions while the other became the official seal.

Once it was decided the insignia would represent all the Construction Battalions the original drawing was altered to replace the “Q” with a hawser rope and the Roman style lettering of the word SEABEES was changed to stencil type letter. On March 5, 1942, the Chief of the Bureau of Navigation approved the designation of Construction Battalions as “SEABEES” and the insignia was authorized to be put on major equipment. 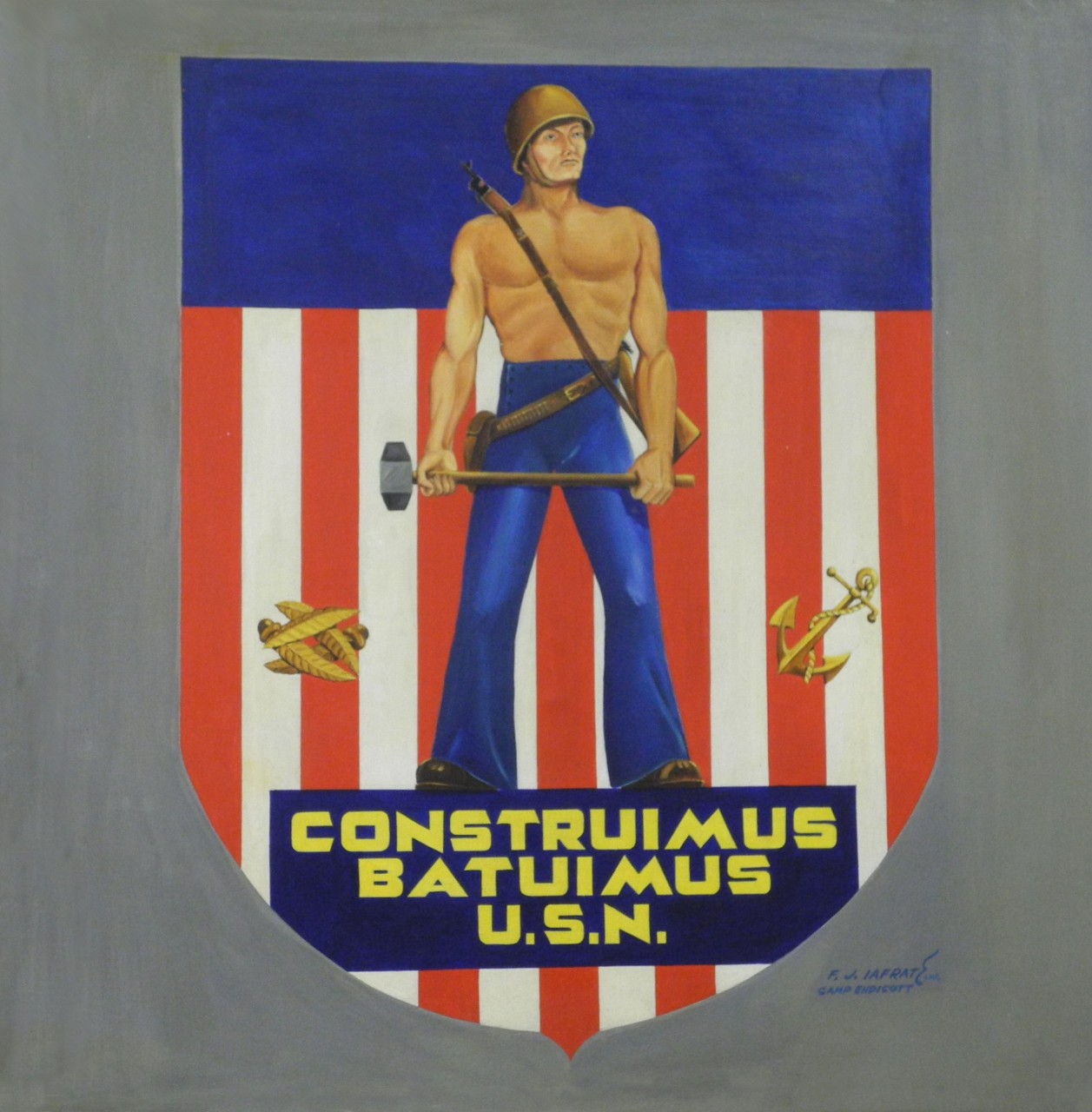 Seabee recruitment insignia used in early 1942 showing a sailor, against a background shield of red, white, and blue, bare-chested, holding a sledgehammer in his hands and entitled Construimus Batmimus, USN.