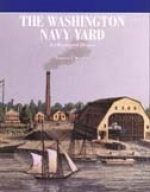 First published in 1999, this reissued work highlights the accomplishments of the Navy's oldest shore establishment still in operation, from its beginnings 203 years ago as a shipyard for the new warships of a fledgling Navy, to the end of the 20th century. Associated with American presidents, foreign kings and queens, ambassadors, and legendary naval leaders, the Navy Yard was witness to the evolution of the country from a small republic into a nation of enormous political, economic, and military power. It was also home to tens of thousands of American workers manufacturing weapons for the fleet, including the 14-inch and 16-inch guns that armed the Navy's battleships in World Wars I and II and the Cold War.