Our Greatest Strength: Navy Wives and the Manpower Crisis in the 1970s Navy 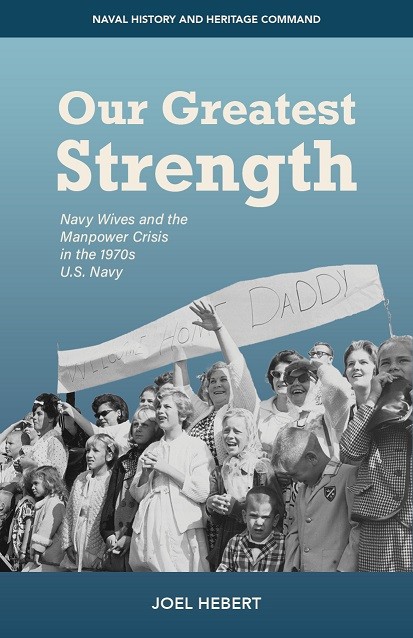 In the early 1970s, the U.S. Navy faced a crisis in recruitment and retention. The Vietnam War had turned many young people against the idea of military service, and the demographics of the Navy were changing. The majority of sailors were now married and had children. The staples of Navy life—long deployments, frequent moves, and relatively low pay—weighed on Navy families. A sailor’s decision to reenlist often hinged on the feelings of family members, and many sailors were choosing to leave the Navy.

In July 1970, Admiral Elmo “Bud” Zumwalt, Jr., was appointed Chief of Naval Operations (CNO). At 49 years old, the youngest CNO in history promised to address declining reenlistment rates by enacting reforms to make naval service more appealing. This monograph tracks Zumwalt’s efforts from 1970 to 1974 to place Navy families, and particularly spouses, at the heart of that agenda. Zumwalt supported initiatives to empower Navy wives, like the ombudsman program, which gave spouses an official way to voice their opinions. Zumwalt also embraced innovations like overseas homeporting, which reduced long separations by allowing Navy families to live overseas. New policies even improved life for unmarried sailors, including one permitting sailors to sport beards.

Zumwalt’s reforms were not a cure-all for the Navy’s personnel troubles, but they placed the service on a new footing. By embracing innovative social policies, the admiral signaled that, henceforth, sailors’ spouses and children would be considered essential parts of the Navy team.