Passage to Freedom to the Fall of Saigon 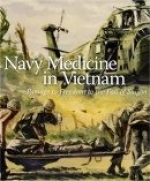 Navy Medicine in Vietnam begins and ends with a humanitarian operation—the first, in 1954, after the French were defeated, when refugees fled to South Vietnam to escape from the communist regime in the North; and the second, in 1975, after the fall of Saigon and the final stage of America’s exit that entailed a massive helicopter evacuation of American staff and selected Vietnamese and their families from South Vietnam. In both cases the Navy provided medical support to avert the spread of disease and tend to basic medical needs. Between those dates, 1954 and 1975, Navy medical personnel responded to the buildup and intensifying combat operations by taking a multipronged approach in treating casualties. Helicopter medical evacuations, triaging, and a system of moving casualties from short-term to long-term care meant higher rates of survival and targeted care. Poignant recollections of the medical personnel serving in Vietnam, recorded by author Jan Herman, historian of the Navy Medical Department, are a reminder of the great sacrifices these men and women made for their country and their patients.