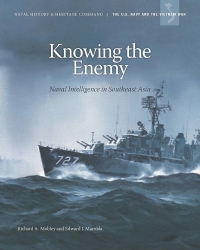 Knowing the Enemy, part of the commemorative series The U.S. Navy and the Vietnam War, details the Navy intelligence establishment's support to the war effort in Southeast Asia from 1965 to 1975. It describes the contribution of naval intelligence to key strategic, operational, and tactical aspects of the war including the involvement of intelligence in the seminal Tonkin Gulf Crisis of 1964 and the Rolling Thunder and Linebacker bombing campaigns; the monitoring of Sino-Soviet bloc military assistance to Hanoi; the operation of the Seventh Fleet's reconnaissance aircraft; the enemy's use of the "neutral" Cambodian port of Sihanoukville; and the support to U.S. Navy riverine operations during the Tet Offensive and the SEALORDS campaign in South Vietnam.