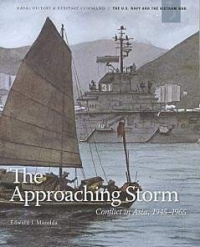 This illustrated booklet describes the U.S. response to Communist movements in Asia after World War II and the U.S. Navy’s role in the region as it evolved from an essentially advisory one to actual combat after the Tonkin Gulf attack off North Vietnam in August 1964. Approaching Storm inaugurates the Naval History & Heritage Commands series the U.S. Navy in the Vietnam War.