War in the Shallows 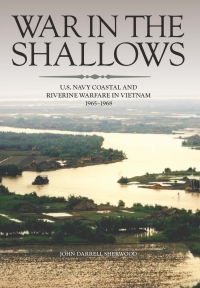 At the height of the U.S. Navy’s involvement in the Vietnam War, the Navy’s coastal and riverine forces included more than 30,000 Sailors and over 350 patrol vessels ranging in size from riverboats to destroyers. These forces developed the most extensive maritime blockade in modern naval history and fought pitched battles against Viet Cong units in the Mekong Delta and elsewhere. War in the Shallows explores the operations of the Navy’s three inshore task forces from 1965 to 1968. It also delves into other themes such as basing, technology, tactics, and command and control. Finally, using oral history interviews, it reconstructs deckplate life in South Vietnam, focusing in particular on combat waged by ordinary Sailors. Vietnam was the bloodiest war in recent naval history and War in the Shallows strives above all else to provide insight into the men who fought it and honor their service and sacrifice.