Warfare on the Rivers and Canals of Vietnam 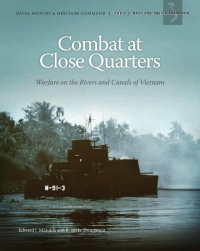 Combat at Close Quarters describes riverine combat during the Vietnam War, emphasizing the operations of the U.S. Navy’s River Patrol Force, the U.S. Army-Navy Mobile Riverine Force, and the Vietnam Navy. One section details the SEALORDS combined campaign, a determined effort by U.S. Navy, Vietnam Navy, and allied ground forces to cut enemy supply lines from Cambodia and disrupt operations at base areas deep in the delta. The authors provide details on the combat vessels, helicopters, weapons, and equipment employed in the Mekong Delta as well as the Vietnamese combatants on both sides and American troops who fought to secure Vietnam’s waterways. The American experience on Vietnam’s rivers and canals is indispensable to understanding the impact of riverine warfare on modern U.S. naval and military operations in the 21st century.