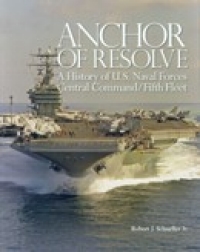 Available for free in PDF (6MB).

This illustrated history explains why the Navy is present in the Middle East, how long it's been in the region, and what it's been doing there. America's interests in the Middle East, southwest Asia, and eastern Africa date almost to the founding of the nation. Since World War II, the Navy has been the first line of defense for these interests. From the establishment of the Middle East Force (MEF) in 1949 through the beginning of the 21st century, the U.S. Navy served as a force for stability and peace in the region. The Navy's presence helped prevent regional crises from escalating into wars, enforce international sanctions, and minimize damage done by regional conflicts to American and allied interests. The work concentrates on the Navy's command relationships, roles and missions, and operations in the period leading up to the First Gulf War, the war itself, and the wars in Afghanistan and Iraq.